On site, humans are already taking position through their two deployment areas. One of these meatbags even try to infiltrate shasvastii lines ! Well, try harder ! He clearly change his mind and prefers the safety of human’s rear line. The team sirius deploy at the center of the table behind a solid cover, though. It’s a serious threat to our plans that need to be dealt with.
But deployment areas are for loosers ! The Shasvastii Expeditionary Force earns one more time it’s name by infiltrating a good chunk of its troops directly near objectives. 4 Seed Soldiers, a Caliban and a Speculo Killer land throughout the map near places of interest.

Round One – Shasvasti Turn
Two taiga rush enemy lines. Both are killed but one them manage to take down a varangian guard with it.
Despite quantronic assistance from a nox hacker, our drone with HMG is no match against this nasty Epsilon unit. The work will eschew to both haiduks who manage to take him down.
In a coordinated effort, the 4 seed-soldiers hatch from their protective shell and take control of two antennas while fortifying their position around the third one through the tactical use of suppresive fire.

Round One – O12 Turn
A paratrooper lands near to the fallen varangian and revives her (apparantly on of this weird human objective of taking care of one another). At the other side, the amazonian queen braves sniping shots and suppresive fire and get dangerously closer to our Mentor. He is still in hiding but it’s an outragous pressure put on our leader !
Meanwhile, the Gamma trooper activates. The very heavy infantry moves from hiding and start shooting. He destroys another drone loaded with a plasma riffle but suffer few wounds from the haiduk as a trade off we are happy to pay.
In the middle, despite being under heavy fire, the Sirius trooper followed by her weird dog-thing regains control of the antenna from a glued on seed-soldier.

Round Two – Shasvasti Turn
Once again, haiduk sharpshooters illustrate themselves by taking down the dreaded Epsilon unit. It clears the path for two Seed-soldiers who activate the 3rd antenna. They push their luck and even manage to rutlessly kill a civilian. But, despite a favorable tactical position, all their numerous efforts to take down the Sirius are fruitless. She single-handedly hold the center of the table for a full turn.
The threat to our Mentor is also swiftly taken care of.

Round Two – O12 Turn
Now in loss of Lieutenant after the death of the Epsilon unit, humans options are limited. They mostly reposition themselves in prevision of the following turn. They especially seem to brace for the activation of the Speculo Killer who remained silent until now. And they are right !

Round Three – Shasvasti Turn
The sirius trooper FINALLY bites the dust but fought well and was able to sustain a stupid amount of damages. There are some worthy opponents amongst humans after all.
Following the Sirius’ dismise, our Speculo Killer activates and manages to one-off two remaining civilians, a mercenary enforcer and a fake news reporter. Sadly she is gunned down while trying to secure the enemy console.

Round Three – O12 Turn
At this point humans are fleeing in terror and few of them even get killed while trying to retreat to the temporary security of their homes. Coward’s reward !

Mission accomplished ! the area is under control and we made civilians pay the price of their army failures ! 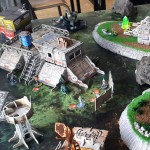 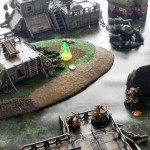 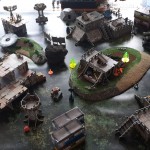 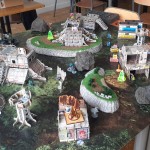