Fought At The Gallery Maze: The Chimneys
198 days 14 hours 20 minutes ago

Even in the Face of Armageddon

I chose first because generally I like to have the first chance to forward observe and then destroy the antennas in The Grid. Since that can’t happen until turn 2 I like to kill orders on turn 1. Unfortunately my opponent deployed well with a ton of repeater-equipped remotes so I couldn’t really employ my puppetbot’s marksman rifle or my kriza’s hmg to take advantage of angled fire lines from fear of getting hacked. I should have used a Jaguar to attack with all of group 1’s orders and the Liberto to attack with all of group’s 2 orders…since both have dogged they could have handed out some big damage. But I often try to get tooclever with nomads and end up looking really stupid, and this game was a classic example. I wanted to get my Heckler onto the upper platform to combi rifle the Danavas Hacker, but I discovered too late (i.e. after already spending a few orders) that the line of sight was wrong and he’d get lit up in ARO by Achilles. So I dropped a repeater instead, figuring I could waste his turn with jammer and repeater hacking threats. But that also meant I had to take out his Danavas hacker with the repeater, since my Interventor was a lieutenant and I hadn’t put her in impersonation. If I didn’t take out the Danavas now, the Danavas would be able to kill my lieutenant with a Pitcher on her turn. To make matters worse, sucker punch versus maestro, even with firewall, was dead even odds (both WIP 15, Danavas +3 for Maestro -6 for Sucker Punch and Firewall, 12 total…Interventor -3 for Maestro, 12 total). I figured my higher BTS gave me the edge but it didn’t work out that way. I lost the face to face and failed the BTS roll and my LT went unconscious. I used three precious orders to bring her back up with my Daktari so I wouldn’t go in Loss of Lieutenant but then I was stuck with the same problem and kept having to fight. Fortunately this time I crit and killed the Danavas. But that was the end of my turn. Meanwhile, I completely forgot that my opponent’s Myrmidon could simply avoid the jammer with stealth, and he chain rifled both my Heckler and fast panda. Easy peasy. He then proceeded to start forward observing, but rolled so high that he actually took a wound. But since he had NWI he could keep going. When it flipped back to my turn I had an opening with my Meteor Zond but I didn’t take it because I was afraid its base wouldn’t fit between the table edge and a building and I’d get stuck. So I tried an attack with my second Heckler instead (detect a trend?) That didn’t work out so well and then for his second turn he was able to start smashing antennas with Achilles and his posthuman sniper. On my third turn I killed a couple of antennas, but my only anti-material weapon was on my Jaguars so it was a very inefficient way of doing so. Also I hadn’t killed much of his stuff so I knew he’d just beat me on antennas, anyway, which he did. But he also did a final run with Achilles (his data tracker) through loads of ARO’s to shoot my Designated Target and secure the 10-0 victory. Well played! 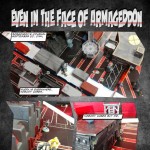 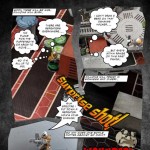 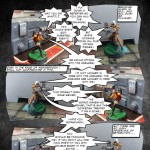 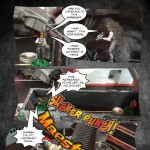