Panacea, Panoceanians for a better PanO 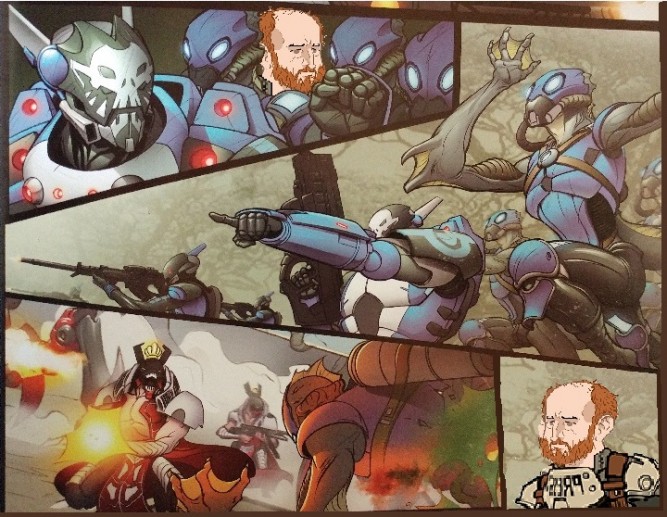 “Hi have you heard of Panacea? We’re a grassroots org of Panocia-“

At least Kiamo was having better luck. The Joan cosplay was a good idea.

After publishing a few harsh articles he’d managed to get them labeled as terrorists. A conveniently timed Yu Jing agent reached out to shelter them and in a ‘devil I don’t know’ decision they found themselves in The Empire’s employ.

He was in the middle of thinking whether they should stop carrying weapons to improve their image when he turned a corner and saw some Mercs shouting about Hex agents spreading disinformation. Hold on. Were they pointing guns at him? 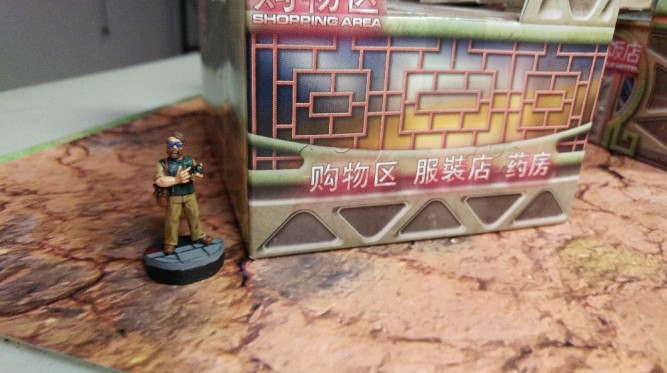 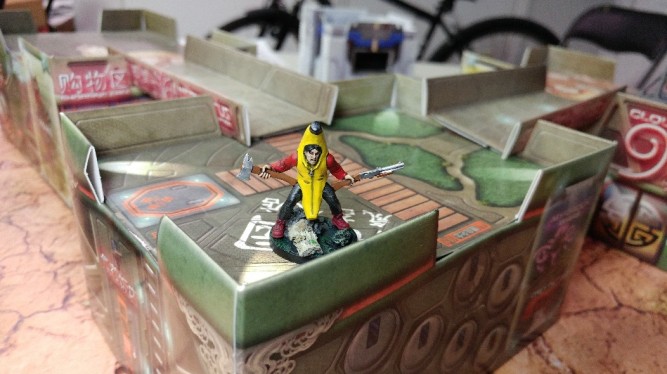 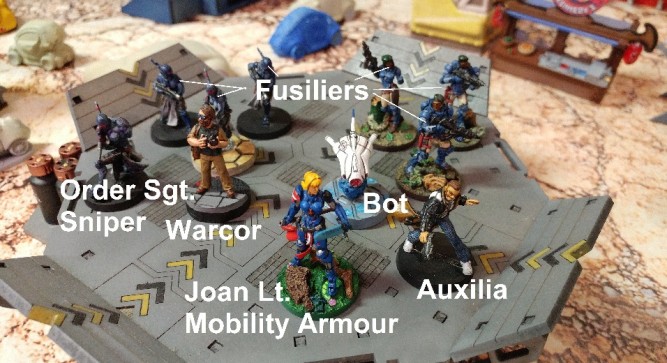 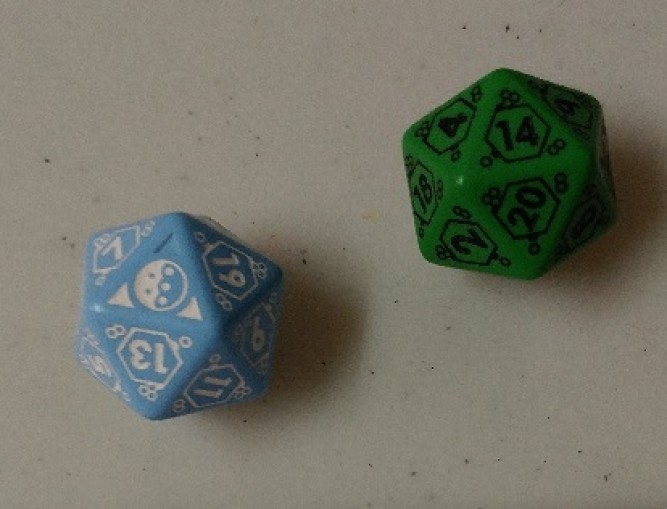 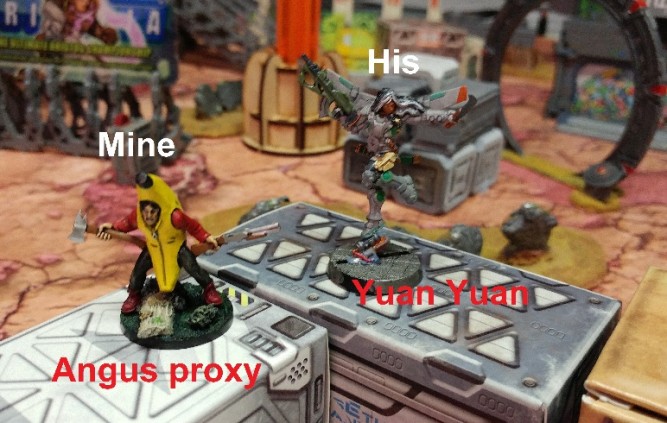 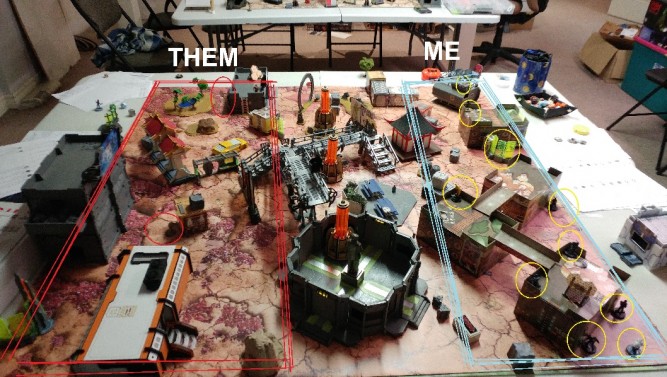 I hide most of my fusiliers behind buildings or prone of rooftops to keep them alive as order-providers. I hide Joan behind a building and leave Angus (represented by banana man) and an order sgt. With sniper rifle standing on a rooftop to use as a slower to my opponent’s advance. 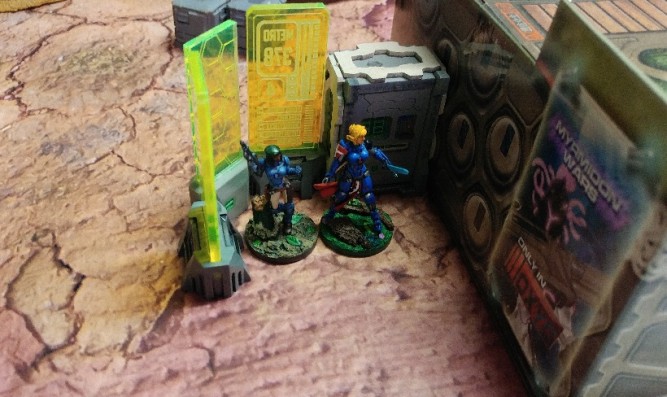 Tucked away safely till active turn

Hannibal Advances, taking down Angus and my sniper order sgt. Quickly. He then has free reign to advance and makes his way behind a building where my warcor, Auxilia and bot are cowering. He takes out the Auxilia and bot but gets taken out by their ARO’s, losing his lieutenant.
His Yuan Yuan drops in on the other side of my deployment zone 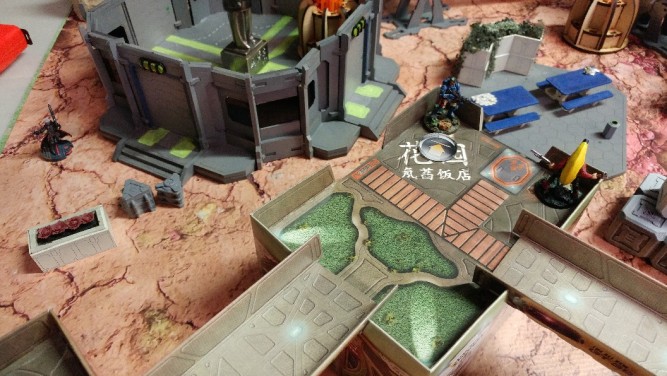 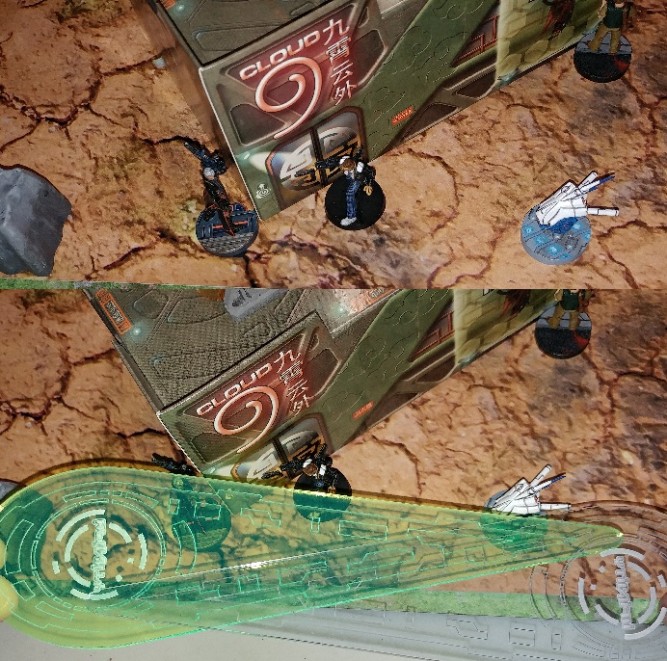 Dueling flamethrowers. No one wins (I sorta won) 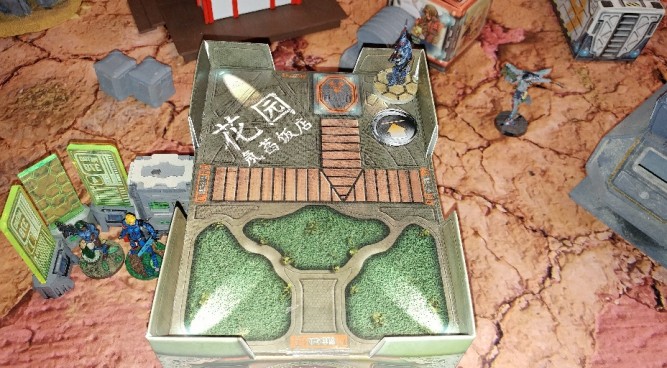 Joan advances and spends several orders getting across the board. She picks off some members of the link team but only kills two before running out of orders, using her last ones to hide behind a pillar and go into suppressive fire. 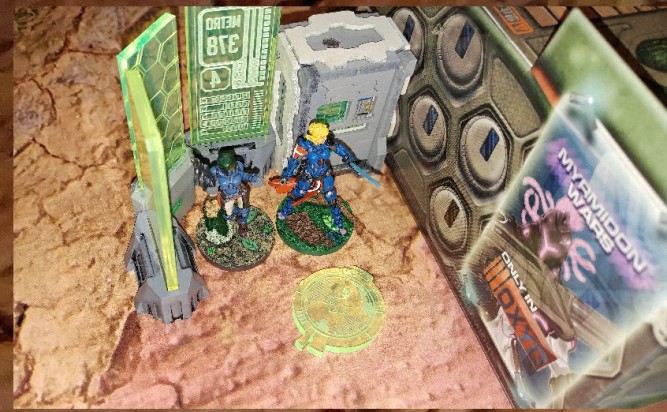 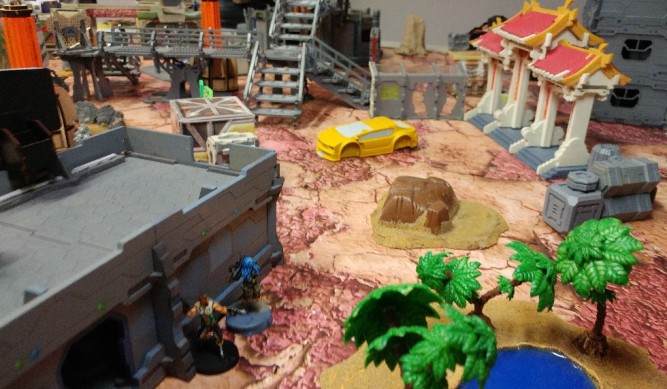 Remnants of the link team 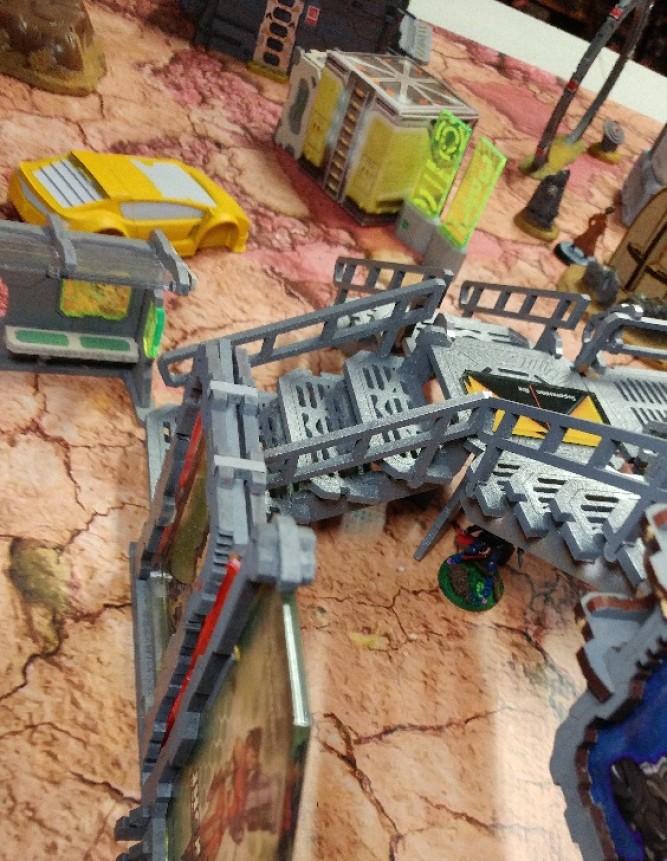 "I'll just go into SF, it'll be enough." Narrator: It would not be enough.

Joan is taken out by the unit designed to off her, armour piercing missile rounds, taking me into loss of lieutenant.
The Yuan Yuan climbs a ladder and fells a fusilier.
Wild Bill formerly of a link team goes and grabs armour from a panoply 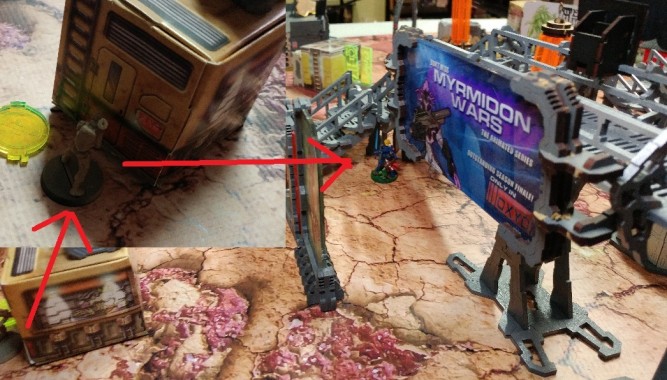 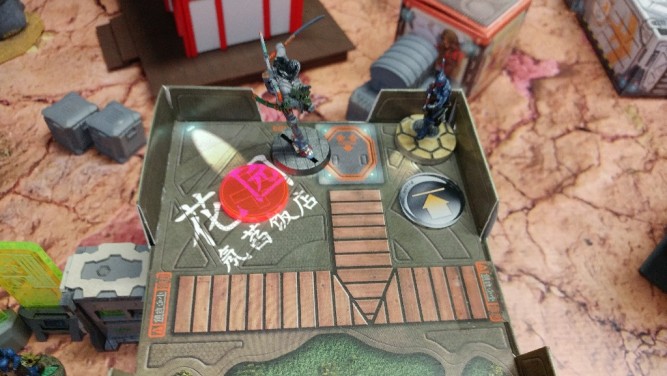 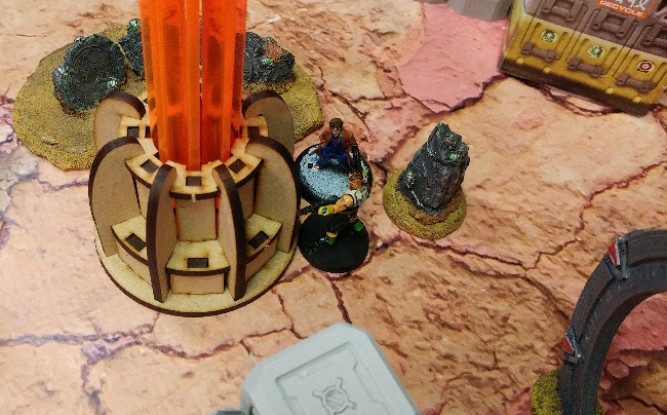 Wild Bill getting wild in that panoply

Vying for revenge, one by one fusiliers rise and rush Wild bill only to fall like leaves to his terrifying pistols 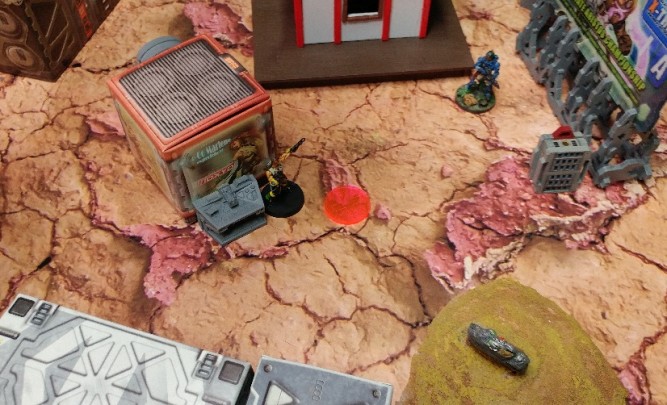 "I'll take out Wild Bill from behind, that'll work." Narrator: It would not work.

Wild Bill Gets another panoply, mopping up a few more fusiliers

Another fusilier dies while trying to take on wild Bill in a gun fight, game called. 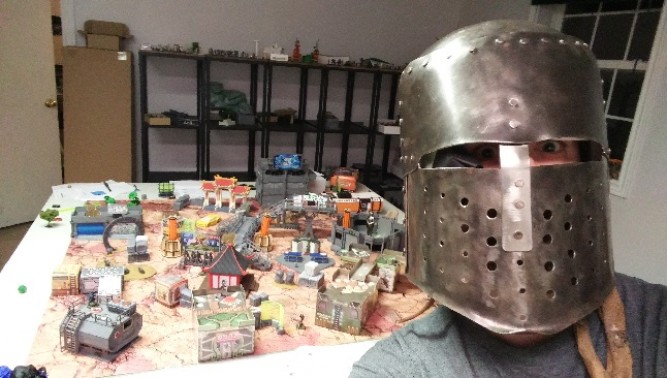 Yours truly with my best game face