Ariadna Driven Off Once More!

Driving Off the USAriadnans Once More 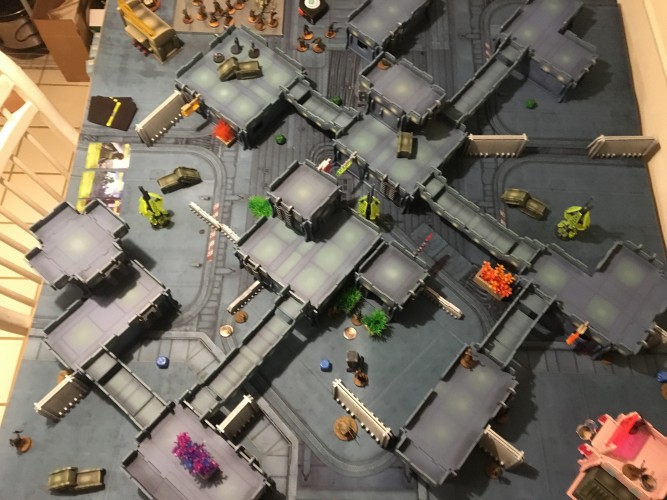 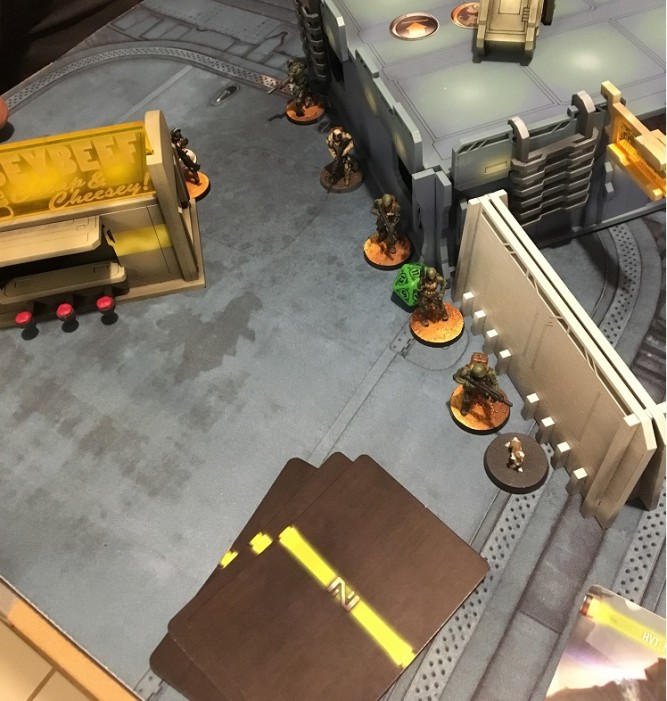 A heavily armored team of Ariadnans and the ingrate Wild Bill stack up on our left flank. 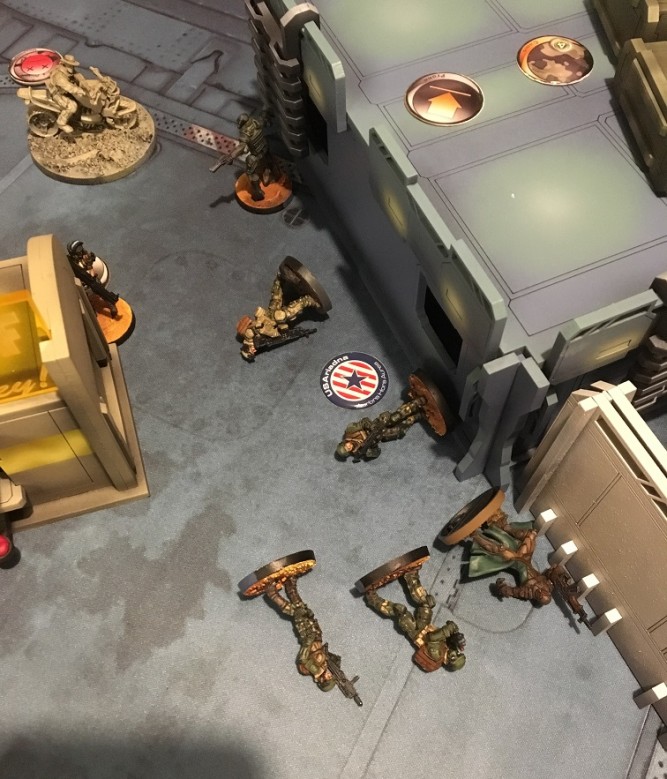 But Al Djabel rushes into the fray, skewering and shotgunning Ariadnans left and right! Three grunts, a minuteman, and a desperado all fall, with Wild Bill being gravely wounded!

Haqqislam High Command had hoped that with the conclusion of our investigation into the Xaraks Batteries, our relations with Ariadna would normalize once more. We have traditionally been allies, formal and informal, with that rough and tumble frontier people. However, they decided to take offense at our diligent investigation, and have since focused their efforts on our facilities in the asteroid's traffic control center.

On this occasion, the USAriadna force rolled in as a raggedy bunch: hardcases, desperados, and foxtrot observers to lead the motley crew. We knew we were in trouble as soon as their force arrive; it was a big one. I first ordered Al Djabel to undermine whatever minimal quantronic network the enemy had managed to establish--which he did (Net undermine)--and to then attack on the left flank.

Under cover of smoke, the famous assassin (or at least a version of him) charged into a pair of grunts and eviscerated them with his viral claw. He then leapt from the smoke screen, blasting away with his shotgun. The last remaining grunt, a minuteman heavy gunner, and one of the two desperadoes went down to the blast, while Rosie Monroe removed Al Djabel from the board with twin shotgun blasts of her own.

Close Defense on the Right Flank 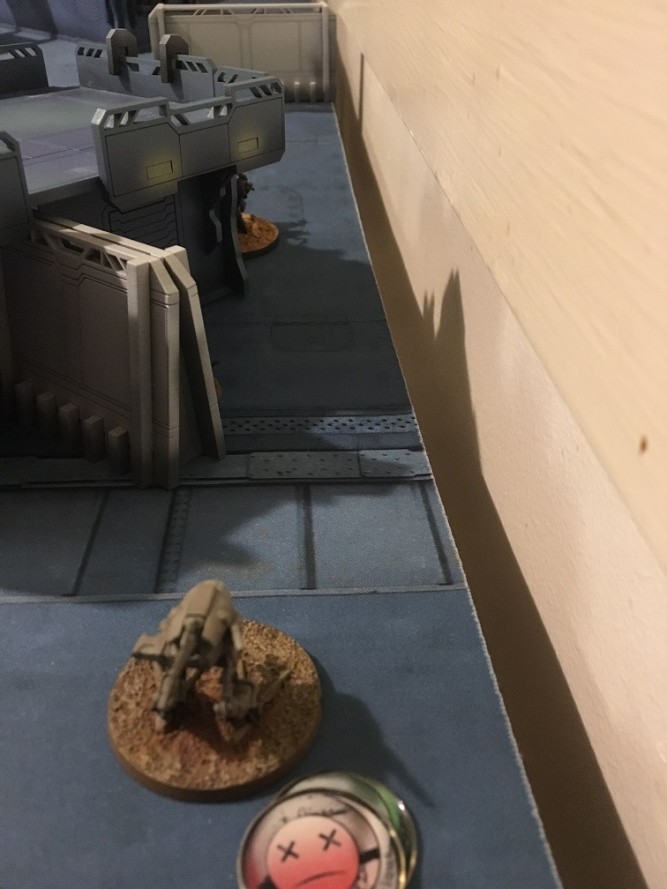 The second desperado charges our right flank, eliminating our Rafiq before it could scan the encroaching civilians. 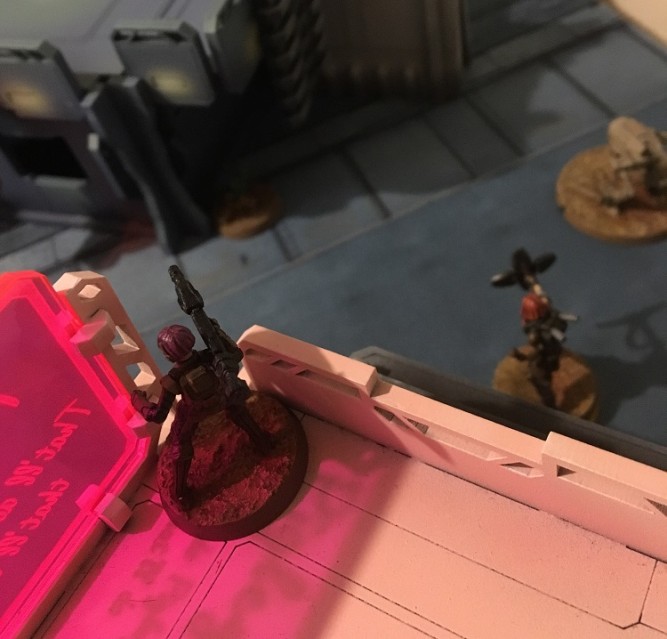 But the desperado goes down to overwatch fire from the Ghulam team's missile launcher! 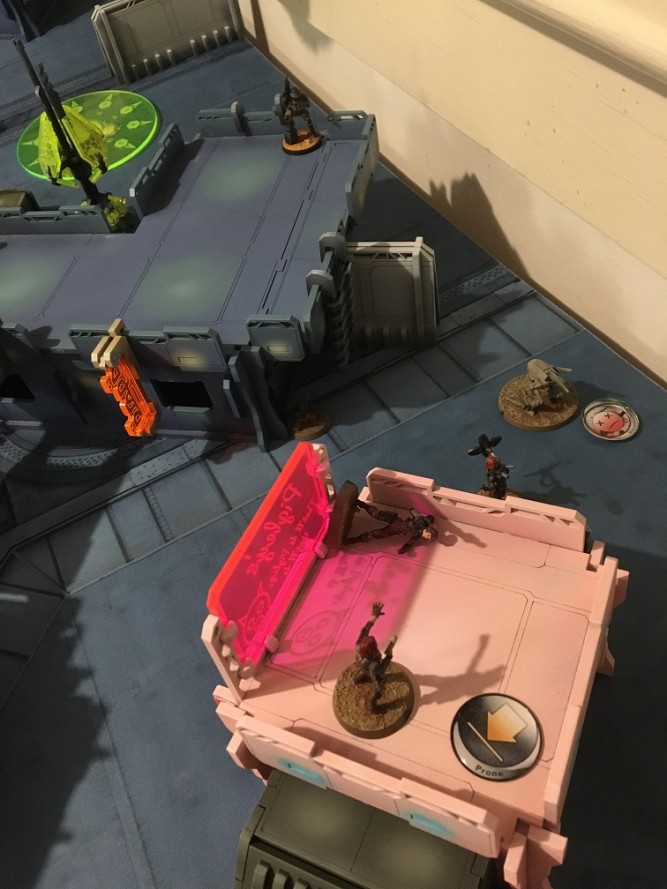 Who was in turn bombarded by indirect fire after being spotlighted by an encroaching foxtrot ranger. 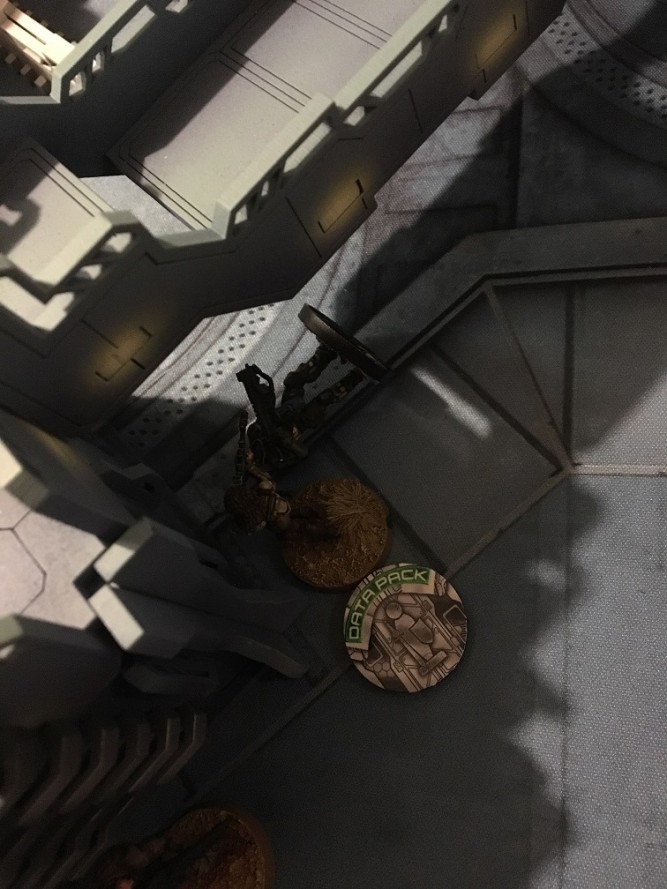 Meanwhile, Leila Sharif is able to recover a backup copy of an unconscious infiltrating grunt, previously disabled by a muttawi'ah's skilled knife work.

On our right flank things were shakier. A desperado almost penetrated our defenses, but our brave Ghulam team downed him with missile fire before he could do more than disable one of our sensor carrying Rafiq remotes. Unfortunately, the Ghulam with the missile launcher was in turn eliminated when she failed to fire at en encroaching foxtrot ranger, who called in her position to the Ariadnan Katyusha launcher. One volley of fire was all it took to blast the Ghulam to pieces, although our doctor thankfully took cover in time to avoid being wounded.

In the backfield, a pair of our muttawi'ah worked together to trap and eliminate an infilrating grunt. The first one threw a smoke grenade to obscure his sight, and the second charge into combat and took the grunt down with down quick knife work. Leila Sharif was then able to reach the downed Ariadnan and quickly copy him for later interrogation and possible repatriation (in extremis recovery); unlikely though that may be for an Ariadnan.

Hold Them Back; Complete the Objectives 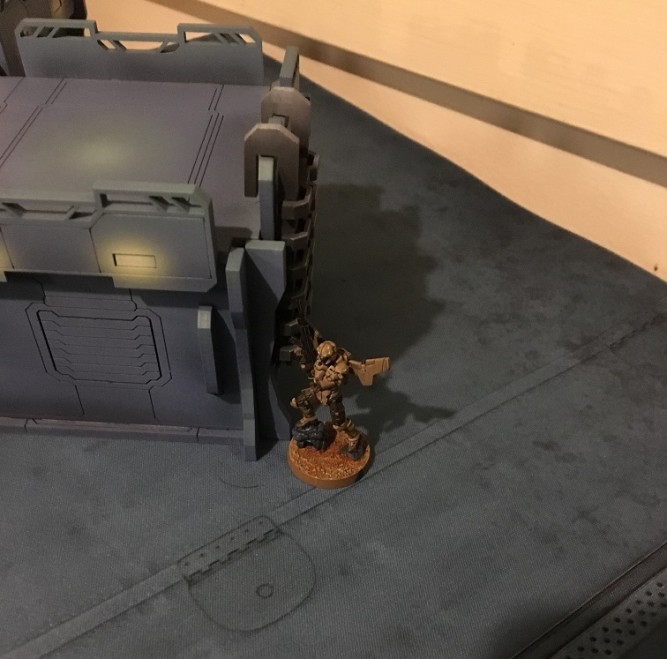 Our Ragik hacker arrives just in time to map out the enemy's right flank before securing one of their high value targets (Mapping and HVT: Kidnapping). 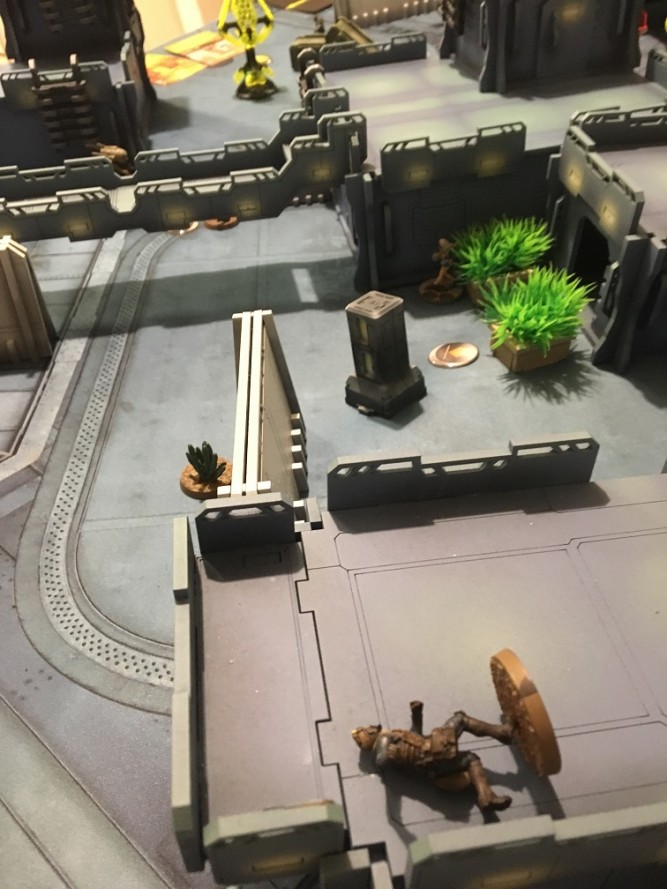 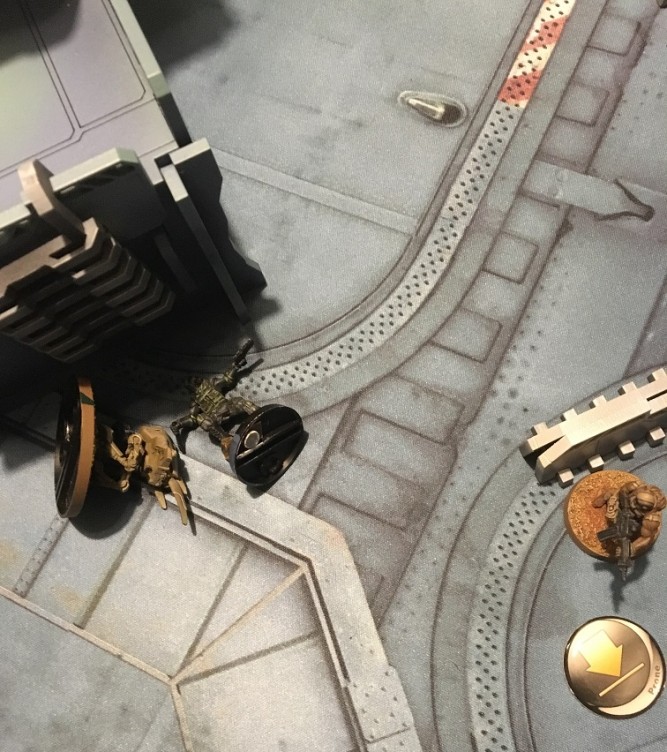 Wild Bill eliminates our second Rafiq in close combat, and is shot down by our Farzan forward observer.

The Farzan is in turn killed in close combat by an enemy hardcase. 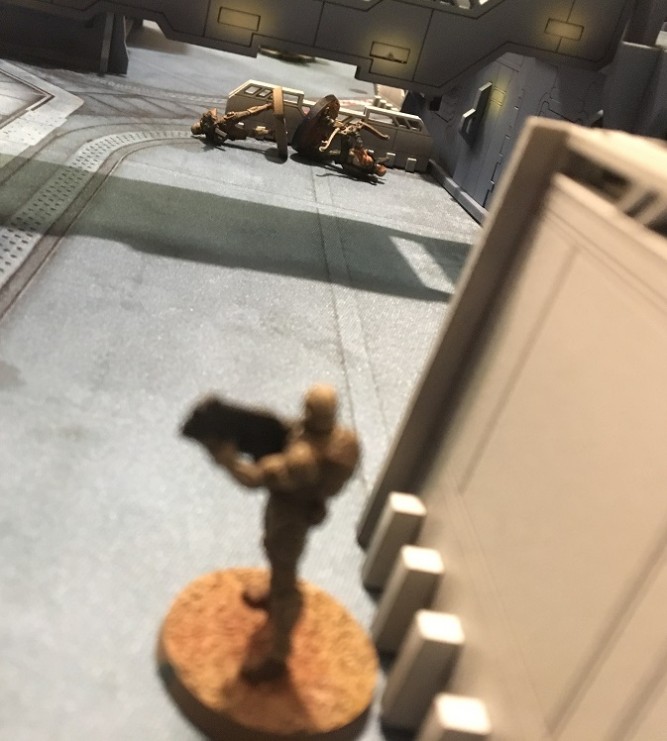 And then I in turn shoot down the hardcase. In the face.

With the Ariadnan advance halted on both flanks, I ordered my men to focus on gathering as much intelligence as possible. First, our Ragik dropped onto the field, mapped out the enemy's deployment zone looking for how they acheived their stealthy ingress (Mapping), and then grabbed up one of the three civilians that had inexplicably accompanied the Ariadnans into the traffic control center (HVT: Kidnapping).

Once this was accomplished though, we faced one final attack. Wild Bill charged us on our left flank. I ordered our troops to hold their fire and see what he did, knowing that any one trooper would lose that fight. One daylami didn't listen, and he did lose the fight. Bill ended up charging our Rafiq and beating it into the ground with his fists, but he was simultaneously finished off by my fallow Farzan. However, one of the remaining enemy hardcases then charged the Farzan, and despite his inferior skill he managed to take the senior hassassin down in close combat (Predator). However, that was the hardcase's last act, as I put a single slug between his eyes amidst the swirling melee.

With Bill down, the few remaining Ariadnan's clearly lost their will to fight and began to withdraw. Yet hoping for reconcilliation, we allowed them to leave the field with no further violence. I hope that, in time, the wounds of this conflict will heal, and the alliance of Nomads, Ariadna, and Haqqislam will continue into the future. Without the inbred weakness of total reliance on Aleph, we can yet face the menace posed by the Combined Army.

OOC: Had a fun game with Yvain. We agreed to play countermeasures instead of Highly Classified to try a new mission and...not play highly classified. As we were both playing forces that have to stretch to cover everything, we both agreed CM was preferable. He had no hacker and I had no engineer, but we were able to burn one each turn which allowed the game to flow nicely. Al Djabel's rampage early on probably won me the game in the end...as will happen.

Keep up the good work everyone, it's a pleasure reading your reports!