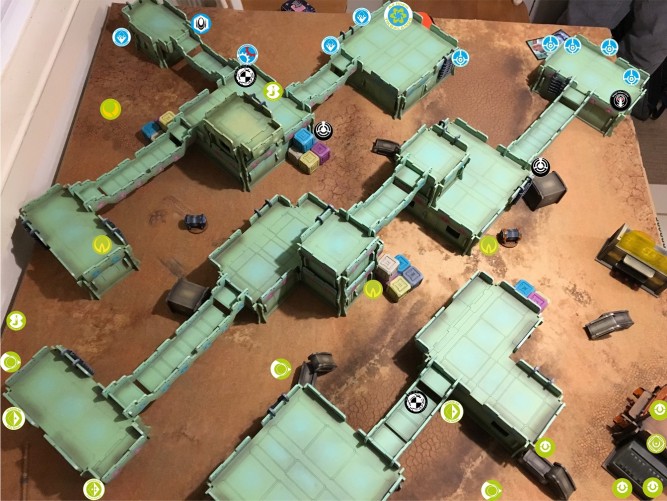 Infiltrating into the Liberty Cargo administrative area, we encountered a large patrol of the Shock Army of Aconticimento. With an imposing Tikbalang light TAG and a vicious Bulleteer in our way, I order Al Djabel forward to go to work. 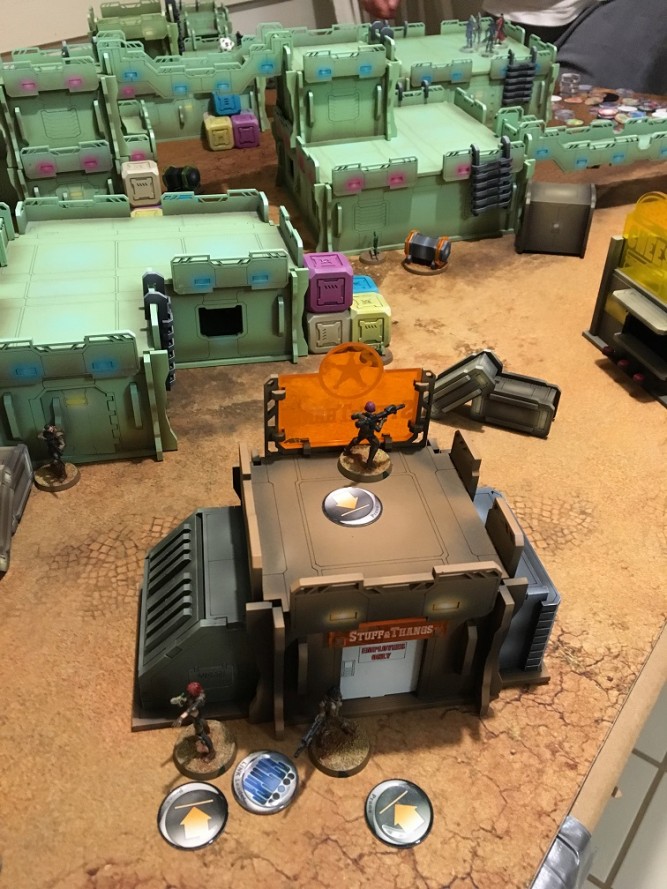 The Ghulam team readies their weapons to engage the SAA link team on the right flank. 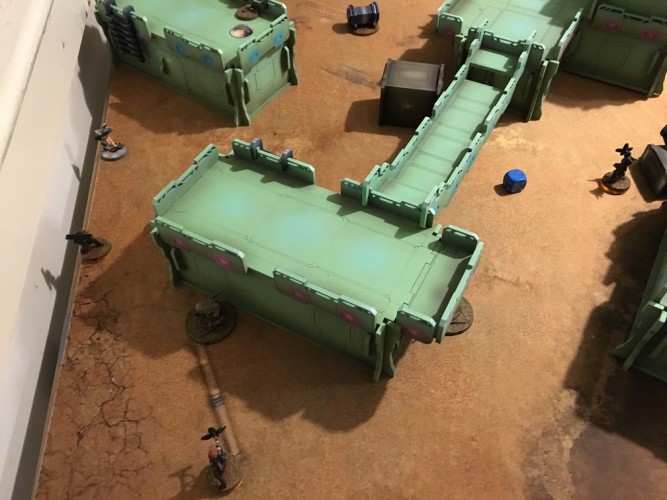 While irregulars and remotes shore up the defense on the left flank.

With the investigation of the Ariadnans concluded, Haqqislam intelligence turned its eyes to Panoceania. Never ones to see through subterfuge, the hyperpower overreliance on Aleph and inherent corruption make it a porous target for the machinations of the Combined Army. Infiltration of Panoceania to some level is inevitable, but their Hexahedron generally keeps the worst of it at bay. However, with rumors amongst the intelligence community of shasvastii infiltration into the Hexahedron growing with each passing day of conflict on Novvy Bangkok, it was time to go to work.

I directed my force to one of the less well-secured areas of the Liberty Cargo front operation: its administrative offices. Ever organization has its bureaucratic aspect, and where there is bureaucracy there are lazy security guards...or so we thought.

We unexpectedly came upon a heavy patrol of the AAS, complete with a Tikbalang light TAG, one of the legendarily vicious Bulleteer Armbots, and a full fireteam of AAS regulars supported by an elite Bagh-Mari sniper. It looked as though my light infiltration force stood no change against such heavy firepower, so I ordered Al Djabel to quickly infiltrate their weaker left flank and cause maximum damage. And he did.

FFS! Al Djabel I Choose You! 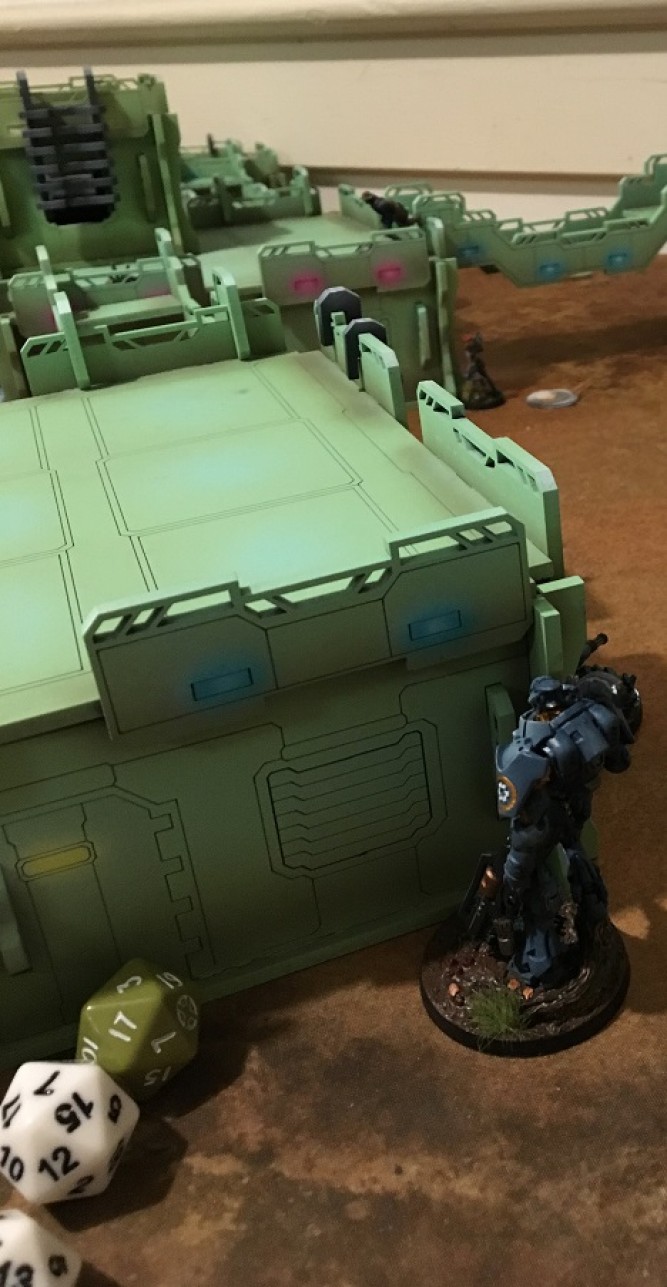 The enemy Tikbalang spots the incoming audit, but is confident its paperwork is in order. 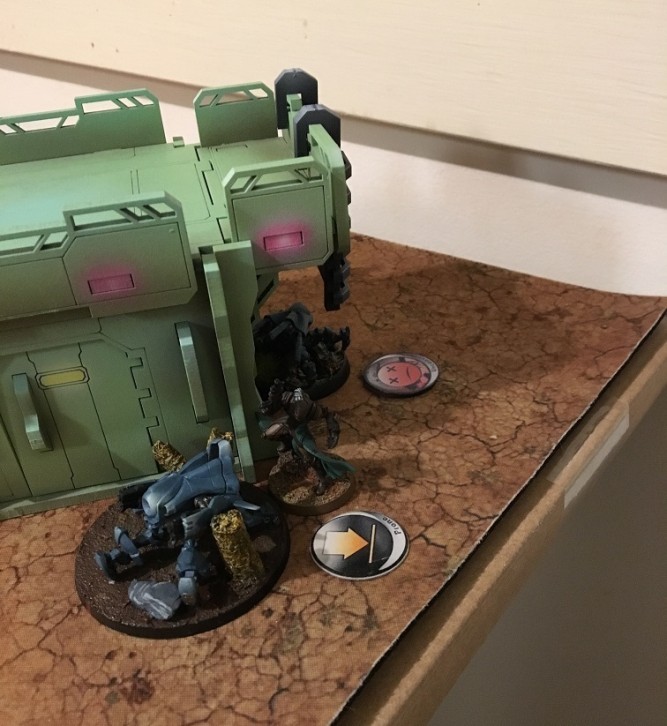 Al Djabel makes his way up the left flank, disabling a Fugzai remote and then a Bulleteer with deft stabs from his knife so as not to alert the enemy to his presence. 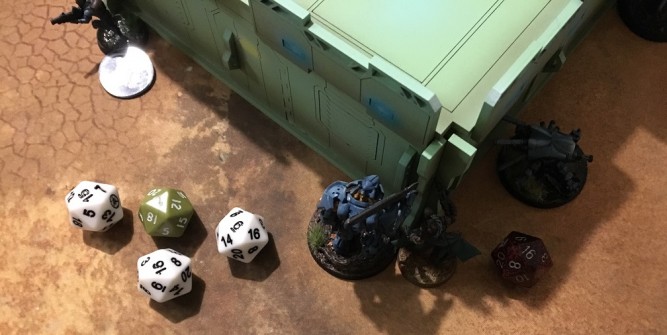 After re-impersonating, Al Djabel makes a made dash across open ground and engages the Tikbalang! His impersonation gear is burned off but he survives to slash two massive gouges from the Tikbalangs internal structure.

With a last desperate attack, Al Djabel ducks the Tikbalang's attack and sinks his claw into the Tikbalang's internals, crushing its central processor and severing the connection of its remote pilot.

Al Djabel flew up the left flank like an inescapable sandstorm. He dived over the enemy Fugazi before it could identify him, and with some quick knife work he eliminated the Fugazi and Bulleteer before they could react. Re-engaging his Bob From Accounting disguise, he charge across the open ground to engage the enemy Tikbalang. He wasn't spotted until it was too late. Leaping through the deadly firestorm of the Tikbalang's flamethrower, he clawed his way into its internal structure and crushed its central processor, cutting of the ghost connection and eliminating the threat. As the remains of the Tikbalang crumpled to the ground, the muttawi'ah and daylami advanced to secure the left flank of the battlefield.

OOC: It took 10 orders to kill the Tikbalang, so I'm also going to lay it out by order.

Orders 1 & 2: Double move twice to get between and prone behind the fugazi and bulleteer.
Order 3: CC Fugazi with MA4 and knife; two wounds
Orders 4 & 5: CC Bulleteer; one wound (saved the first time)
Order 6: Re-impersonate
Orders 7 & 8: two double moves towards Tikbalang; only discovered once, so still in impersonation state 2.
Order 9: Move into CC With Tikbalang. Fugzai misses a flash pulse and Tikbalang flamethrowers while I use MA4. Make the flamethrower save and put two wounds on the Tikbalang. This was a hail Mary at this point, as I did not expect to survive the first attack. Getting two wounds from two regular hits was an unexpected bonus.
Order 10: Idle and CC again. This time the Tikbalang misses it's CC attack by 1 (Needed a 17; whew!) and I crit twice with Al Djabel. The Tikbalang fails one of the additional saves and t is now unfortunately off the table, leaving Al Djabel is completely exposed. 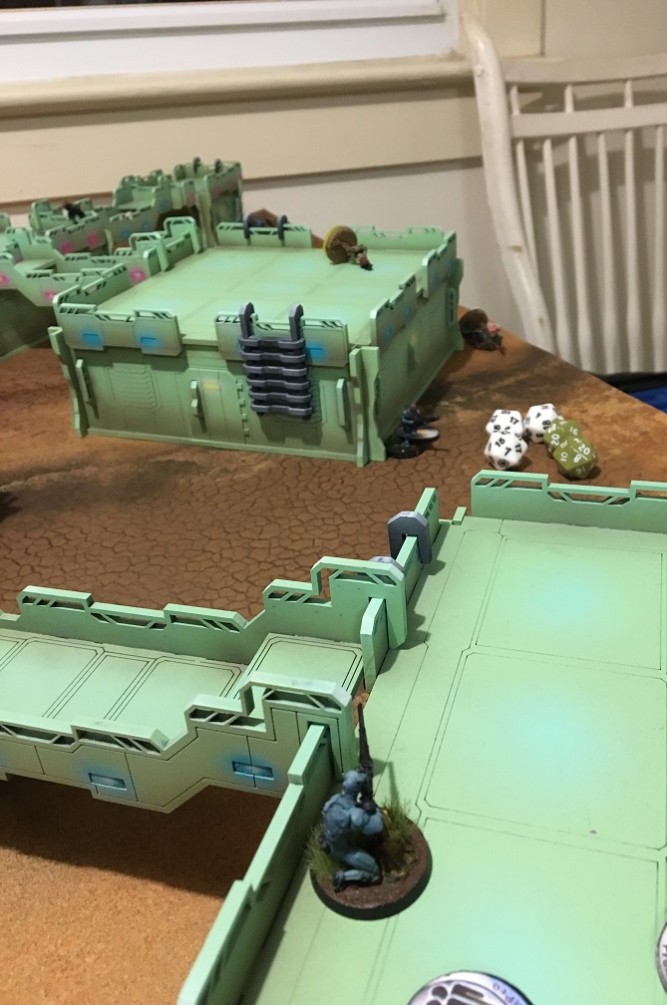 The Bagh-Mari sniper takes point, eliminating Al Djabel and a daylami in the center, and the Farzan minelayer (and his laid mine) on the right flank. 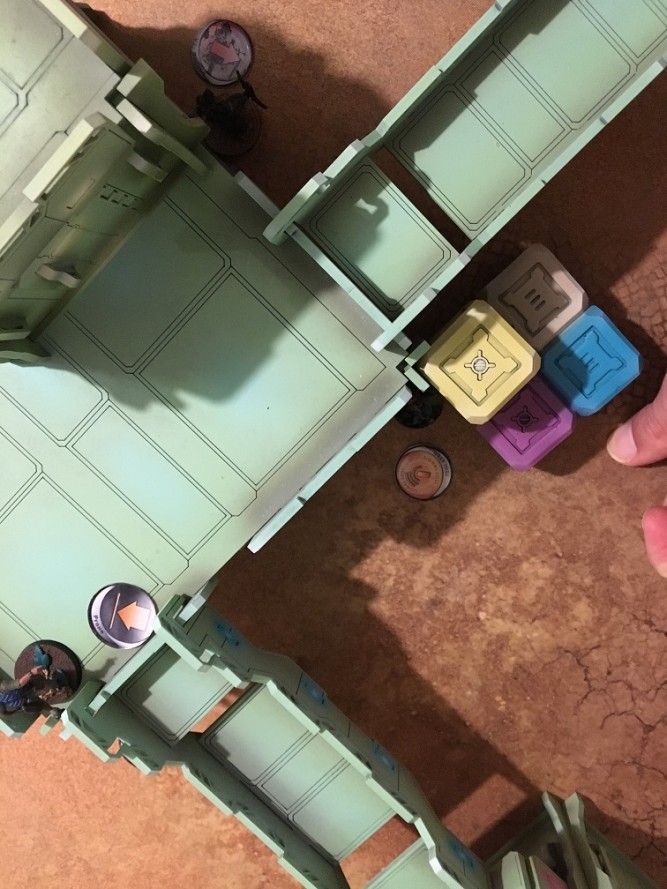 Achievement Unlocked: Jam the Tech-Bee a/k/a most useless jam ever. 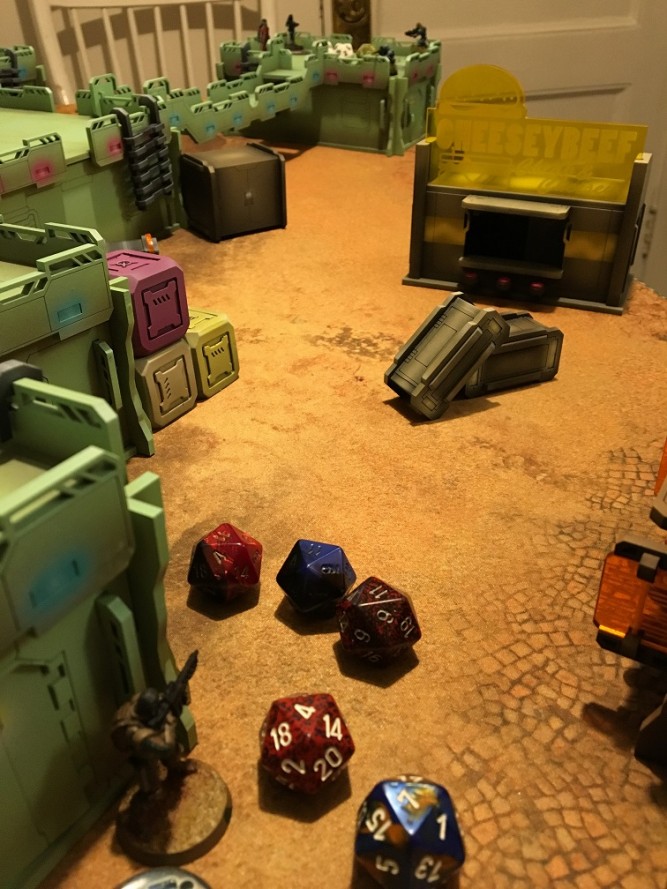 But no link leader can stand up against the dreaded three-shots-to-the face! (Triple crit on the Bagh-Mari sniper!) 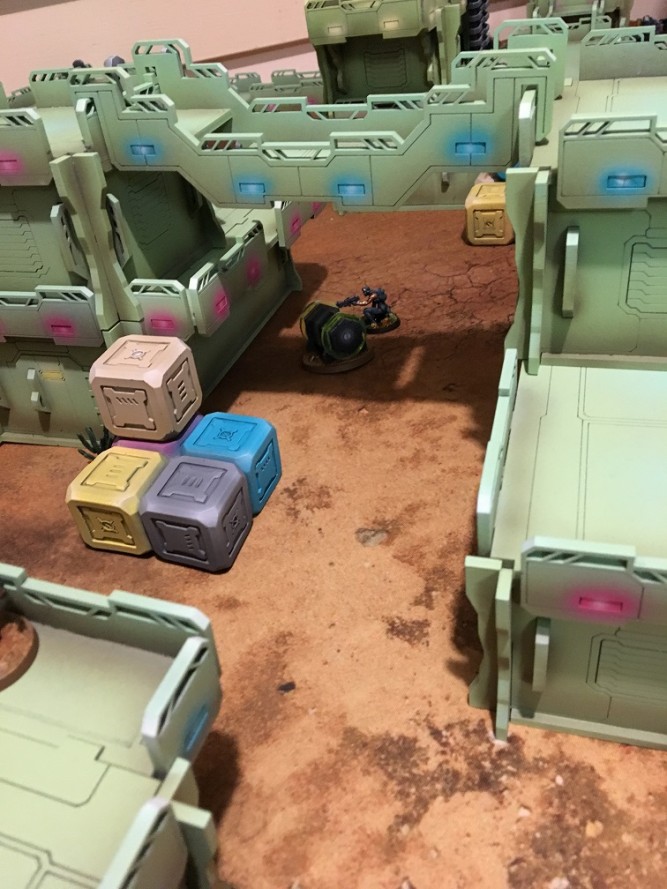 With the action occurring elsewhere, a Naga killer hacker advances towards the central supply cache, unawares of the deadly cactus surprise waiting nearby. 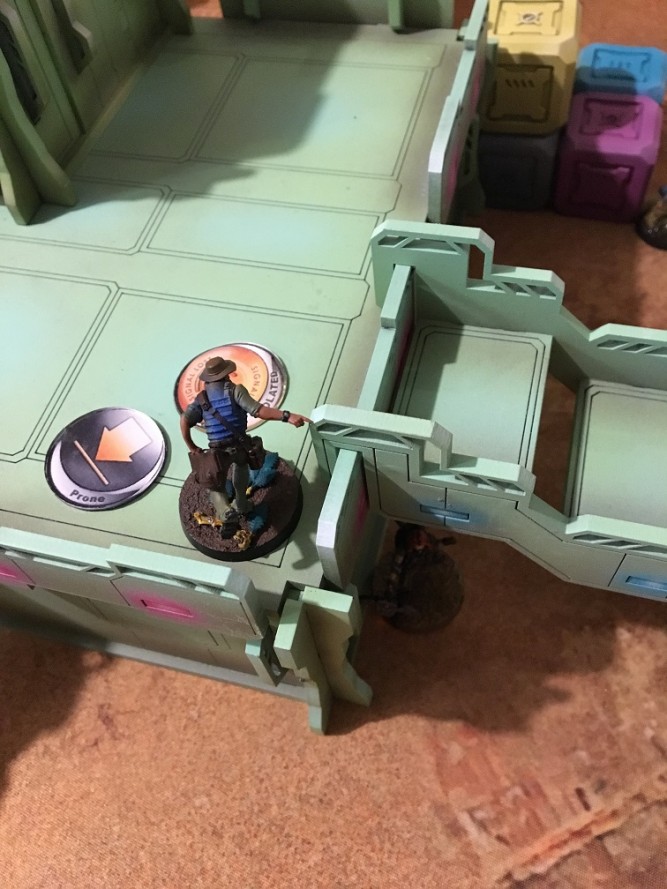 Oh yeah! The final muttawi'ah isolates another cheap irregular! But only after taking down an encroaching Akalis commando with her chain rifle.

The fight got bloody for us after the Tikbalang went down. With Al Djabel exposed, he was an easy target for the Bagh-Mari sniper, who shot down a covering daylami as well. He then methodically discovered and eliminated my brother Farzan and the mine he had laid down, leaving the field clear for an attached Naga killer hacker to move up the field unmolested. However, with time against him the Naga did not disturb the supply caches we had come to collect, and instead elected to take cover and try for the cache later. This proved an unsound choice, as our Rafiq remote was able to move up the left flank and wound him severely, followed by an an audible popping sound as Leila Sharif uploaded a Redrum program through the nearby Fanous.

With the Bah-Mari having gone into action, I knew I would have to risk our Ghulam team to try and neutralize the superior fighter. I shouldn't have worried. Hyping himself up for the engagement since the first second, our Ghulam heavy gunner sliced the pie and put an amazingly well aimed concentration of shots not just into the Bagh-Mari, but into the front plate of his helmet (Triple crit!). His head disappeared in a shower of red mist and just like that the threat was removed.

Unbeknownst to the team however, the Bagh-Mari had given their forces Naga a chance to move up and retrieve the supplies before our team could reach them. However, by the time he got there he knew he would not be able to both grab the supplies and make it to cover, so he chose to conceal himself instead of trying to rush the process. Thankfully this worked in our favor, as with a coordinated order I was able to both move a Fanous remote into hacking range and engage the Naga with effective rifle fire from the Rafiq. A final burst of redrum from Leila Sharif put the Naga on the ground for good. 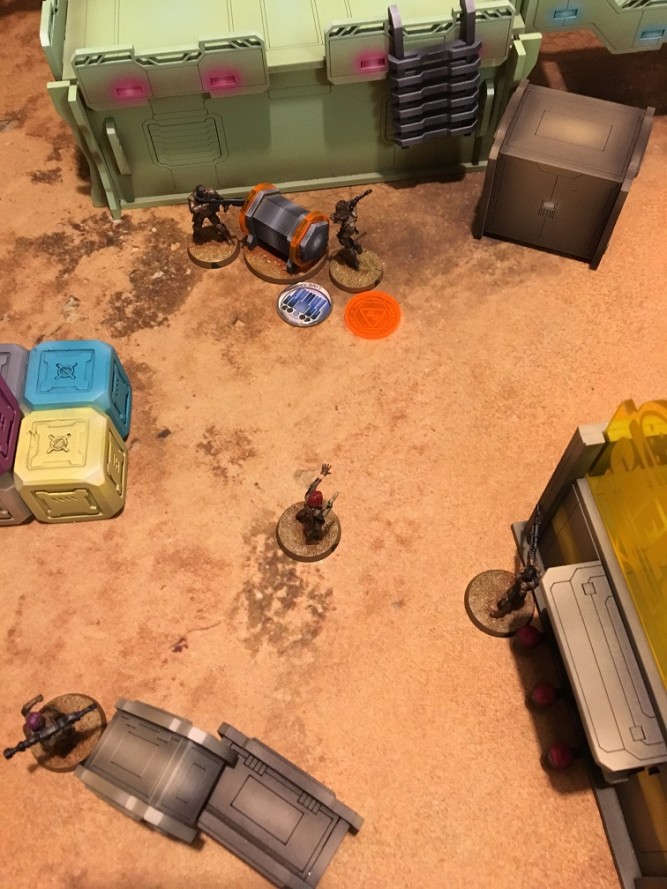 Led by Leila Sharif, the Ghulam link team moves forward and secures the right flank supply cache, while our Rafiq remote manages to retrieve the supplies from the center cache. 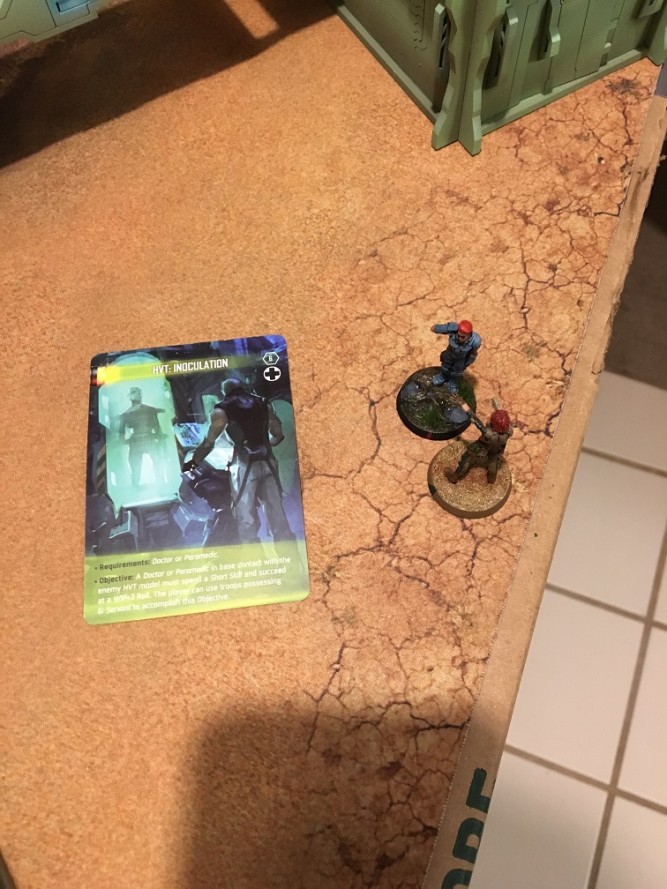 On a mission of mercy, our Ghulam doctor inoculates Fusilier Angus against the ravages of gingivitis. 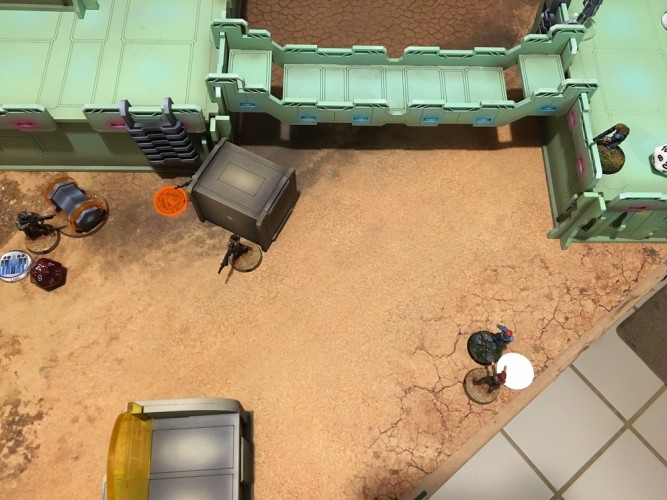 A last ditch attack by the remaining regulars shoots down our doctor and light grenade launcher Ghulams, but is ultimately unable to turn the tide of battle. 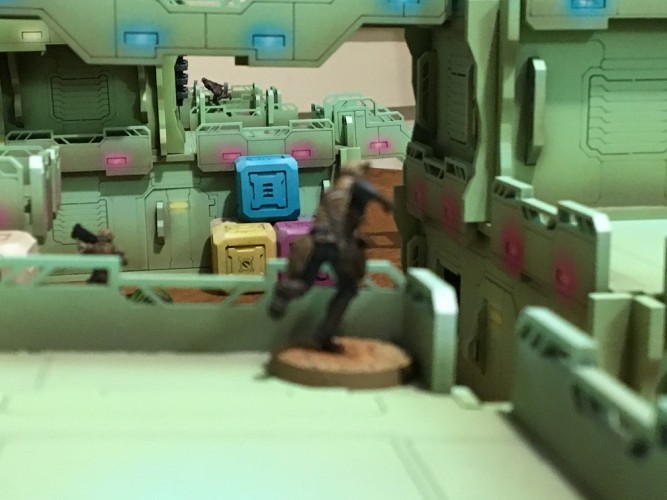 Epilogue: It turns out War Correspondents wear polarized lenses that protect them from the bright flashes on their cameras.

With the central and right flank threats eliminated, our Ghulam team moved up the right flank to secure the supply cache there, while our second Rafiq remote moved up the center to secure that cache. With two of the three caches under our control, we decide to set our defenses and attempt to hold off the expected, final counter attack from the AAS force. I ordered our Ghulam doctor to inoculate Fusilier Angus, who had stumbled onto the field and whose breath absolutely reeked of alcohol. Selecting the correct vial, our doctor moved up and inoculated him against future bouts of gingivitis. With the magic of medicine, his breath would ever thereafter smell faintly of peppermint.

The remaining AAS regulars struck back, but one was downed by a pair of missiles even as a second one shot down two of the team members. Even with these casualties, I contacted the AAS force and requested their withdraw. Realizing their extremely reduced numbers (50 points remaining), they agreed to quit the field and can no doubt be relied upon to spread rumors of the efficacy of the Hassassin Bahram.