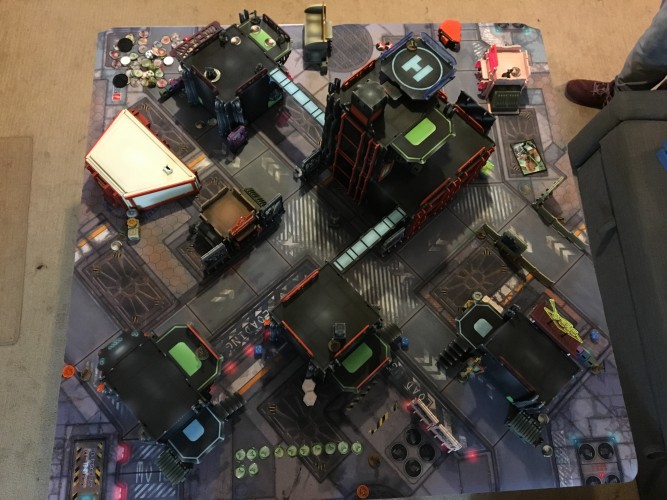 Hassassin force breaches the outer perimeter of the cross-dock, but comes up against a force of the Aconticimento Shock Army recently arrived from Paradiso for R&R. 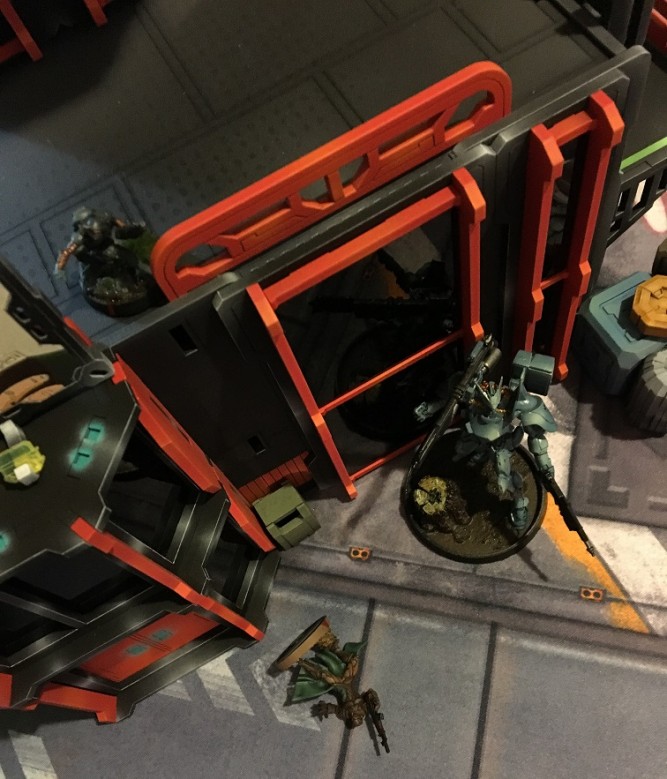 Quickly revealed by an Aleph Naga forwrd observer, Al Djabel fails to halt the advance of the enemy Dragoes and goes down in a hail of HRMC fire. 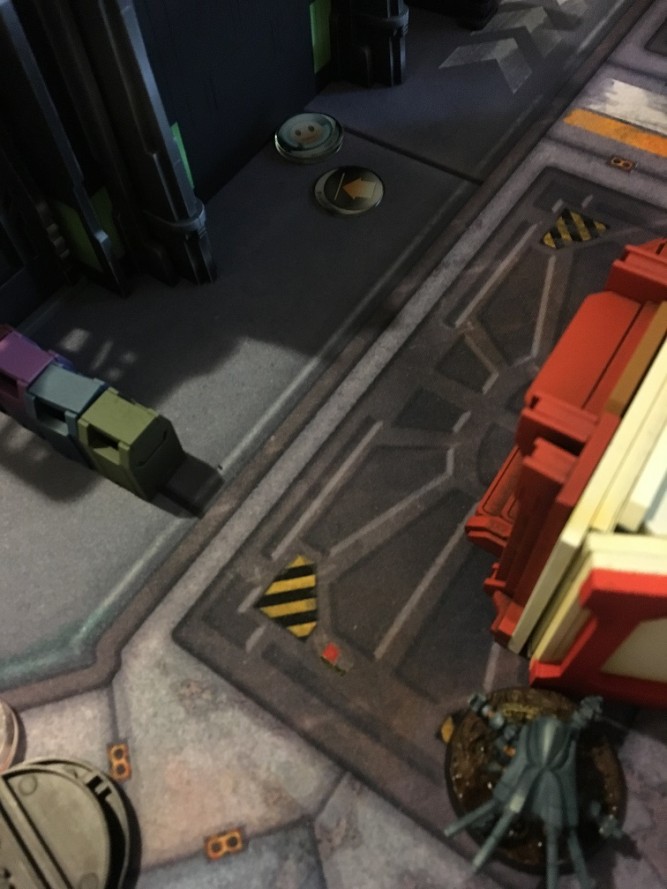 But left to their own devices, PanO forces fail to spot the fiday on their right flank.

We breached the Panoceanian facility with a smug expectation of success in our raid on their lhost blanks. With the casualties taken by Haqqislam so far in the conflict, our reserves were lower than we cared to run them, and despite ample resurrection facilities the supply of lhosts was dwindling. We decided that in its abundance Panoceania could spare to lone a few blanks to Haqqislam. They of course did not agree and declined the sale, but this being the case we will simply reimburse them once the lhosts are in our possession.

Unfortunately it was not that simple. Despite our believed to be unmarked infiltration, when we arrived at the lhost storage area we encountered a quickly organized defense force composed of soldiers from the Shock Army of Aconticimento. We initially believed the force to be understrength, with a fire team of troops but otherwise only a few remotes and support personel. But that was before the Dragoes appearred on the field.

I ordered the recently arrived Al Djabel to engage the enemy TAG, but he was spotted by an attached Naga and was unable to deploy smoke in time to escape a hail of fire from the TAG. However, with Al Djabel down, I ordered our second fiday into action. 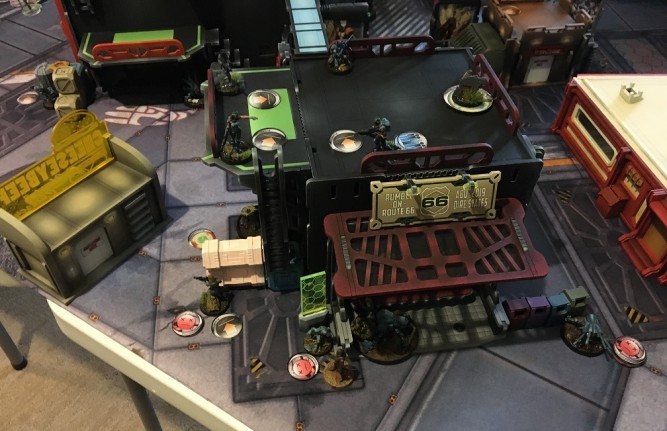 Eliminating several remotes and a single regular, our fiday stole upon the enemy link team with quickness and great cunning. 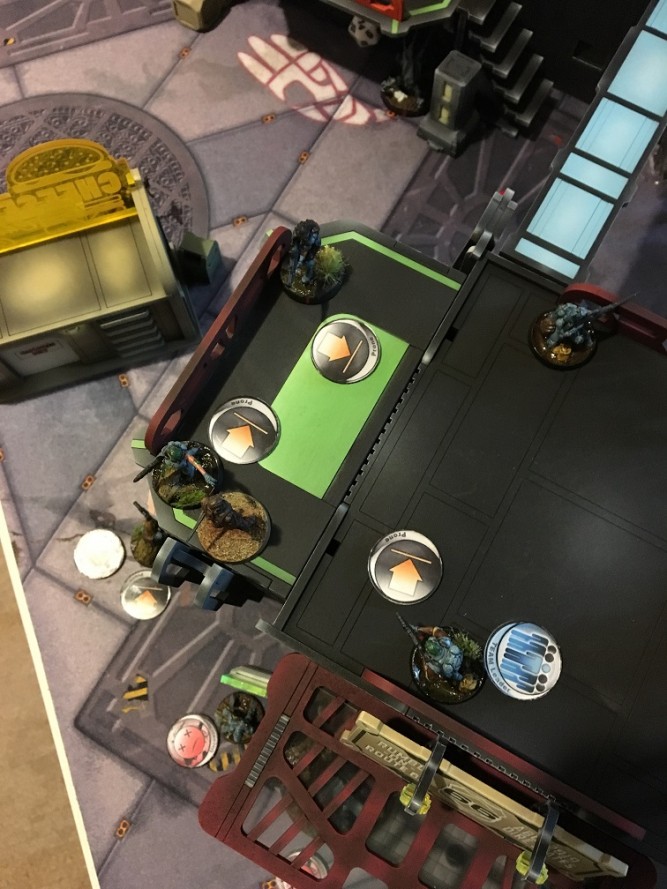 Under cover of smoke, our fiday crept up the ladder to the platform and engaged the regular paramedic, striking him four times to no result!

Fidays are universally regarded as masters of close combat and the art of assassination. Well. Usually. Our fiday shotgunned and slashed his way through multiple remotes and a single regular guarding the team's rear, after which he deployed a smokescreen to prevent the Dragoes from seeing him and moved up the ladder to engage the regular. However, despite masterful sword play, every strike rebounded off of the regular nearly-useless armor, leaving the fiday exposed and the regular very much unhappy with the situation.

Exasperated, the SAA lieutenant ordered their TAG to fire a single explosive round over the head of line trooper to remove their fiday problem. What went wrong we may never know, but in the swirling melee the heavy round impacted on the regular and blew him to pieces, leaving the fiday very exposed.

Identifying that he had served his purpose and that smoke was highly unlikely to deter the Dragoes' next salvo, the brave assassin primed an antipersonnel mine before evaporating in a red mist.

Regrettably, the team was able to activate the mine and dodge the blast, leaving the only rooftop casualty at the hands of the SAA force itself. 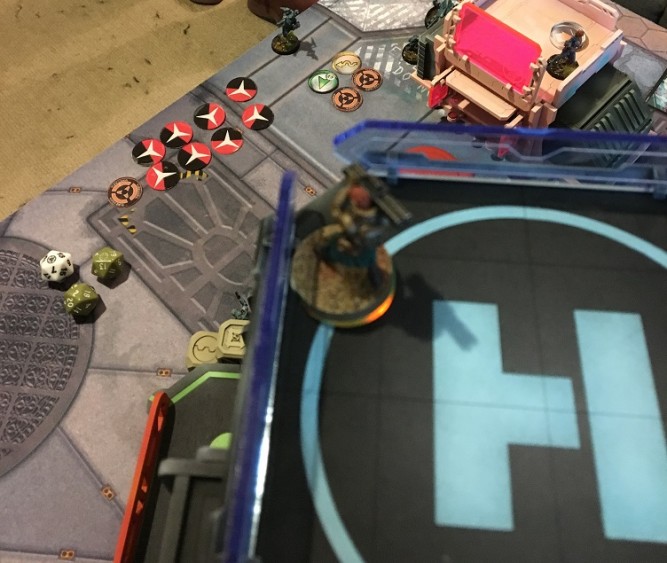 Headless of the danger, Amir reveals from his hidden position and blasts an encroaching Akal commando to bits with the first shot from his panzerfaust. 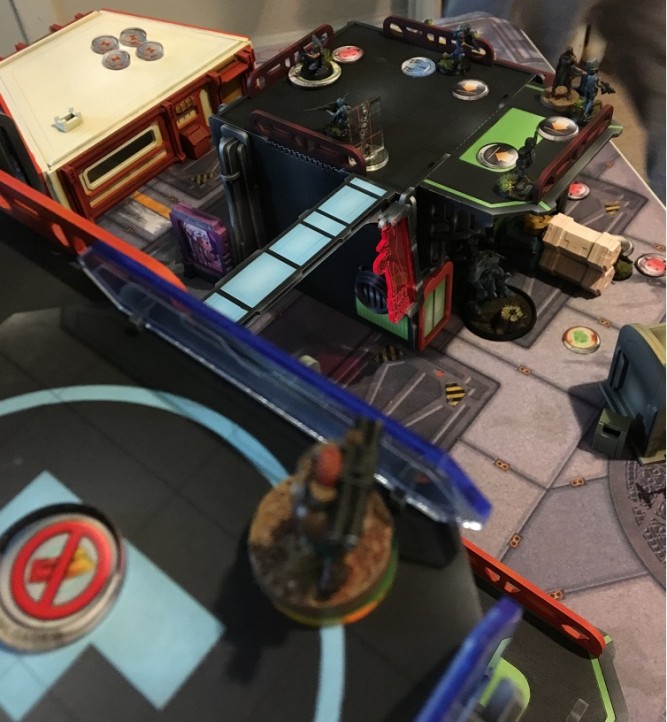 Amir then whirled and put the second shot from his panzerfaust down the foxhole of an Aconticimento sniper! 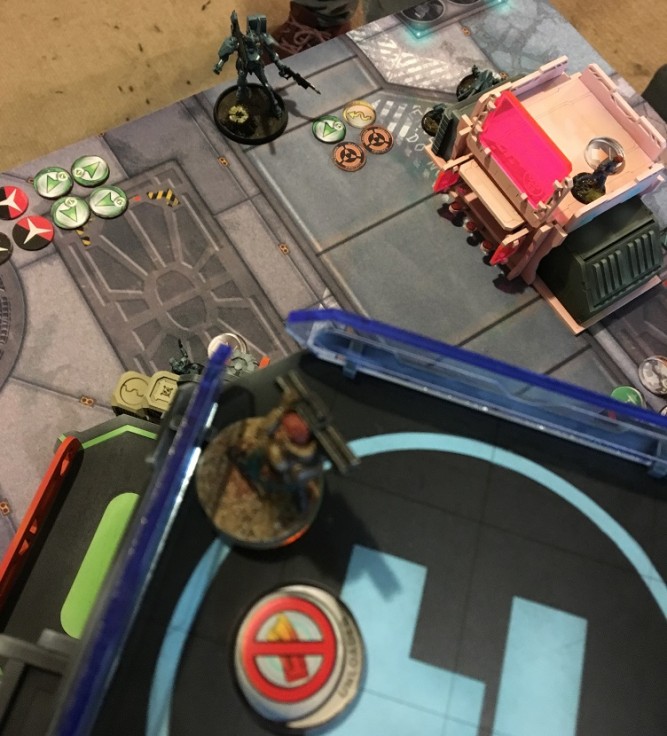 Screaming with righteous fury, Amir continues the fight with his shotgun, going three full salvos against the enemy Dragoes before finally succumbing to the barrage of fire from the TAG's HRMC.

Pinned down and outgunned, my team needed a miracle.

And we got it. Our brave new recruit Amir--may he be remembered this day--revealed from his position to first engage a recently arrived Akal commando with his panzerfaust before the enemy drop trooper could bring his spitfire to bear. As bits of wing and jump boot spun towards the ceiling, he quickly swung his weapon towards the sniper taking aim on him and put his second round right into her foxhole, leaving her broken body covered in sand. Finally, with his panzerfaust expended he used his backup shotgun to return fire at the enemy Dragoes as it moved towards our right flank, causing the massive warmachine to halt every few meters and fire back to little effect.

However, miracles only last so long, and Amir was eventually vaporized by TAG. Now knowing the character of the man, his backup will be restored and with his fresh lhost he will begin his Muyib training. 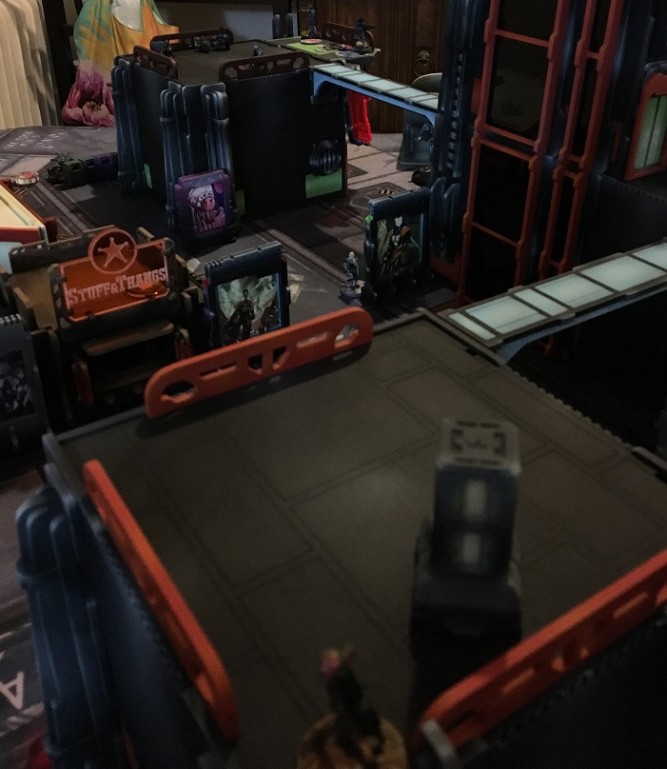 A second but no less important sacrifice is made as Sayidda blasts the enemy lieutenant with her panzerfaust during a moment of inattention, costing her a shell but ensuring her own resurrection. 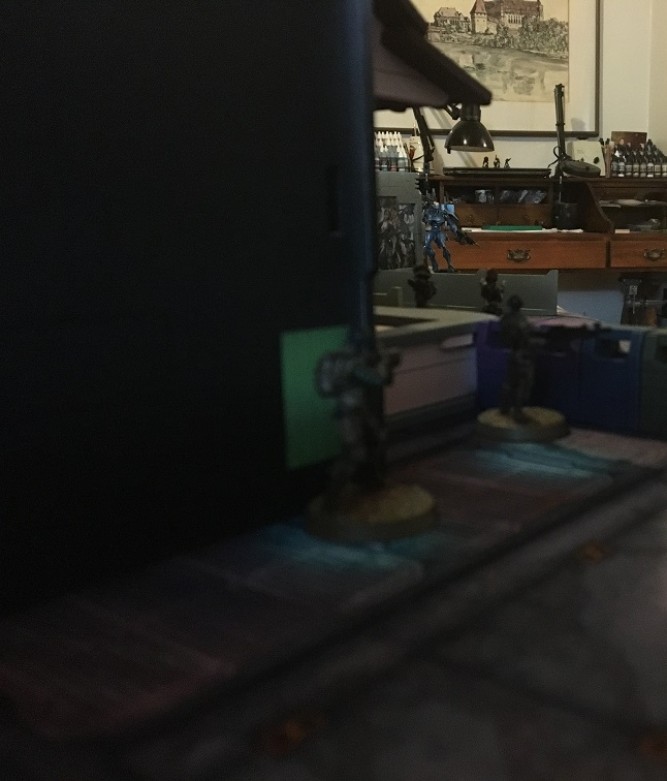 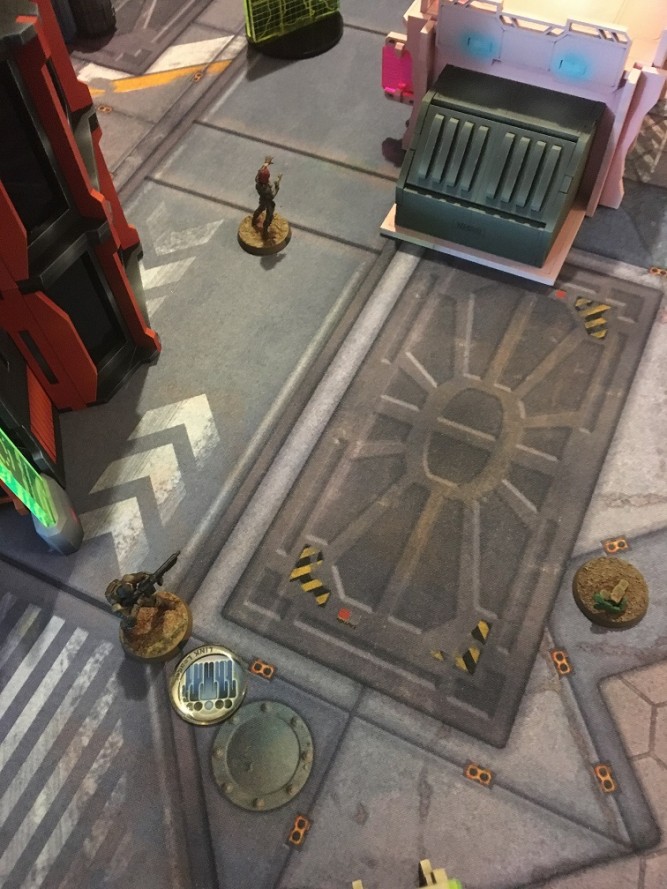 The team's doctor leads the way into the enemy zone to begin acquisition of Haqqislam's newest supply of lhosts.

Despite the exceptional display of Amir's warrior spirit, a light shotgun can take a man only so far. But now a woman rose to the challenge. Sayidda, our last remaining daylami, leapt up to a platform and then scaled the ladder to have life of fire to the Dragoes and the entire SAA fire team. With amazing calm, she leveled her disposible missile launcher on the most distracted member of the team and fired her projectile seconds before the combined volley from the Dragoes, Bagh Mari sniper, and more alert regular sent her to paradise.

The rocket flew true, removing yet another Aconticimento troop from the field and suddenly throwing their force into confusion! Sayidda had killed their lieutenant and now was our chance!

Although the Dragoes managed to move to cover our right flank, the Ghulam team charged forward under the staccato fire from my heavy machine gun as I engaged the Dragoes and they moved towards the objectives. Leila Shariff was shredded by HRMC fire, but I managed to destroy the enemy TAG in two long bursts of fire.

With the TAG down, we were able to move up the field and secure the enemy's supply of lhosts. Our doctor gave each a quick check for aberrant implants, and once the stock was declared clean we ordered up our kameels, loaded our soon-to-be-human cargo, and extracted from the Panoceanian facility. We left worse off than we expected, but not nearly as bad as could have been but for the valiant sacrifices of Amir and Sayidda, now designated as future Muyibs in the search for knowledge.