The Muyib contingent (reinforced) waits for transport to the Cosmika Headquarters in order to assist the Nomad nation. 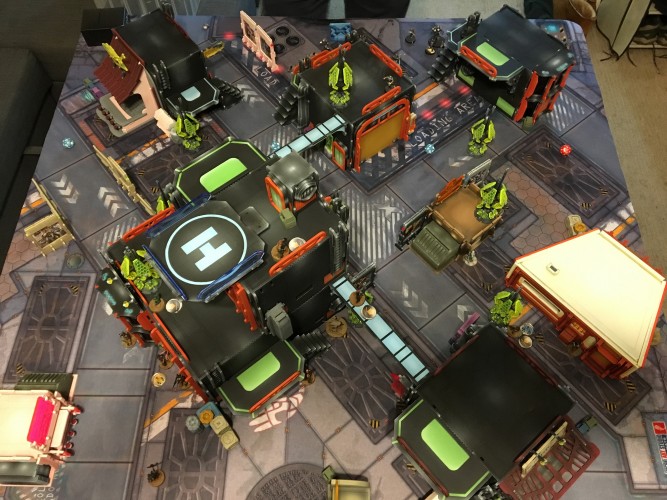 Arriving at the entrance to the corporate park we planned to reinforce, we are unexpectedly met by hostile Nomads unaware of our mission of mutual support.

Haqqislam has enjoyed a longstanding friendship with the Nomad nation. Although we do not adopt their mildly irrational fear of Aleph, we share their concerns with the infiltration of the sphere's A.I. into every facet of life. Although a useful tool, it is all too easy to envision the loss of agency and self that would come from overreliance on such a construct. Therefore while making use of the utility that Aleph (and Arachne) offer, Haqqislam is closer to the Nomads than to the other powers of the sphere, Yu Jing and Panoceania, who rely so heavily on their A.I. guardian.

As such, we have once again agreed to assist the Nomads in fighting off the depredations of the A.A. With out agreement recently hashed out, my force of primarily Muyib operatives was dispatched to the Cosmika HQ to coordinate with the Nomads for the location of our supplemental defensive forces.

Unfortunately, our Liaison Officer missed the bus. (Like seriously, I didn't have an FO in my list because reasons?) As a result, we stepped off the space bus into a group of hostile Nomads who did. Not. Welcome. Us. 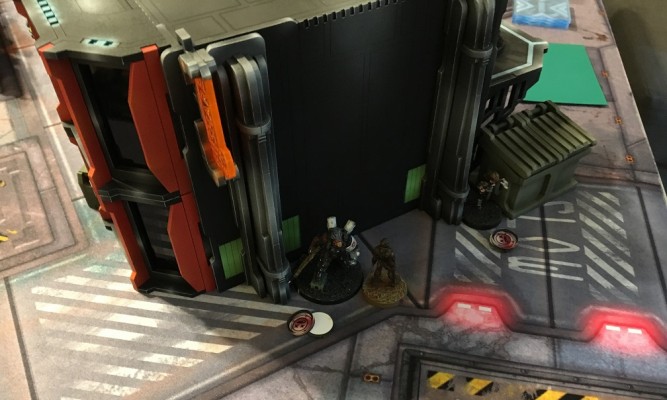 Our fiday surges to the front, downing a dangerous Kriza Borac and a Daktari with a combination of mines, shotgun blasts, and wetwork. 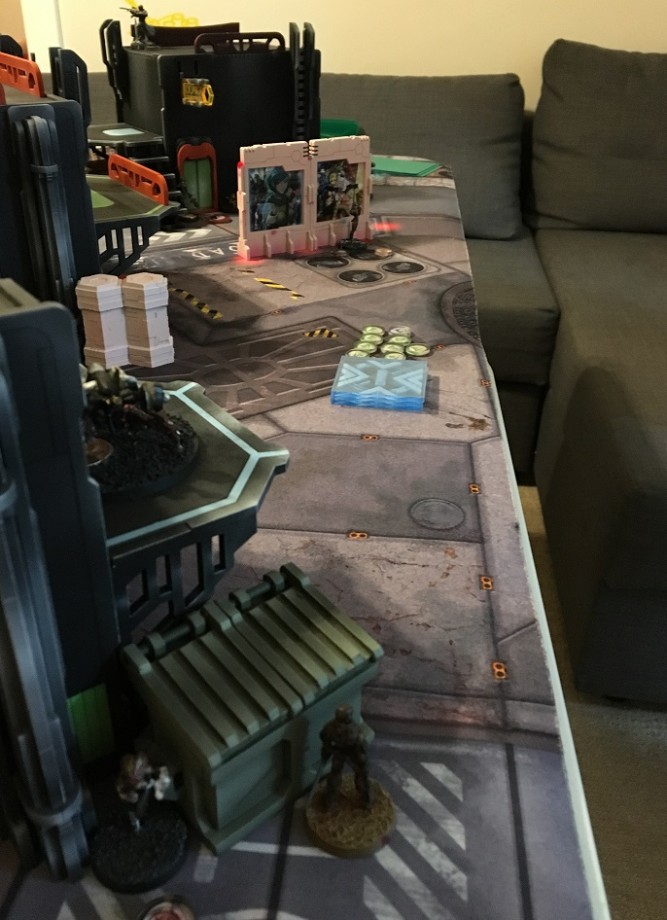 The fiday brings down the Nomad lieutenant with precision rifle fire. 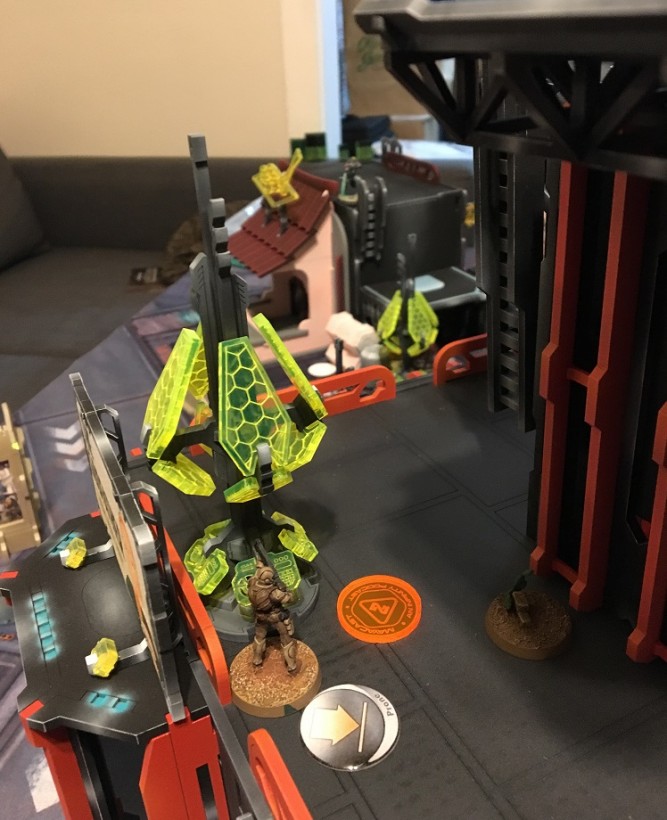 Meanwhile, I forget how to press buttons...and then remember!

The Nomads were confused at our arrival, and it was clear from their quick moves to deploy that they believed we were hostile. I attempted to contact them via open comms, only to discover that open channels were already being jammed by their Interventor. Cursing, I ordered my teams to deploy on either flank, and sent our fiday operative straight for their Kirza Borac on our right flank.

With the Kriza Borac looking the wrong way, the fiday tossed down a mine and then leapt out with his shotgun. He smashed two shots into the Kriza and caught the Daktari in the blast, leaving large rents in the Kriza's armor and an unconscious Daktari. He moved out again and fired twice at point blank range into the Kriza, but the armor deflected the weak shells. It was time for some wet work. With speed and finesse the fiday darted towards the massive Kriza and skewered him through one of the previously opened rents in his armor. With two more quick strikes, the Daktari and the Kriza were out of play permanently (predator).

He then followed this up with a pair of shotgun blasts into the nearby lunakod, and finally switched to rifle mode and managed to down the enemy Interventor at long range.

With the Interventor down the commnet cleared, but the enemy forced was also thrown into confusion; with no clear leader I in turn had no one to contact to get hostilities to cease. We pressed the attack, hoping to end hostilities quickly while at the same time beginning to activate the local commnet to allow Haqqislam High Command to communicate more efficiently with the Nomad leadership. 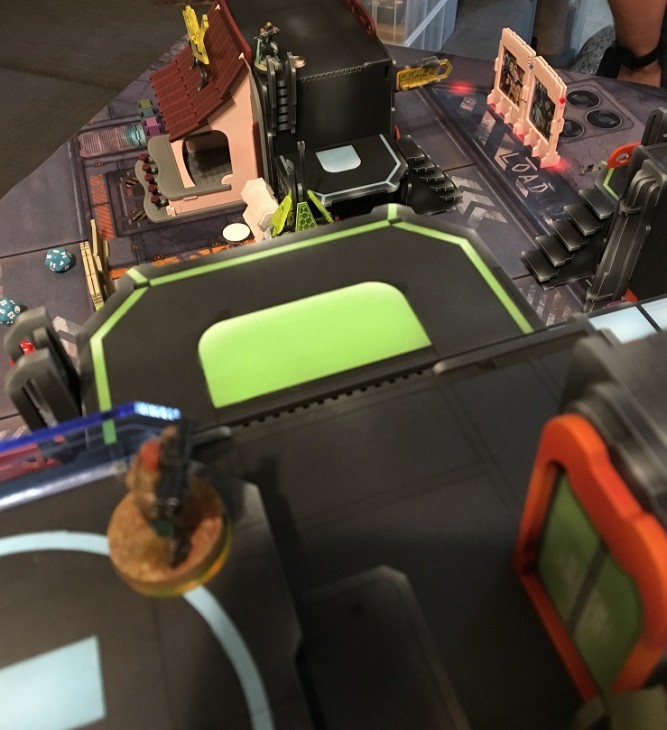 The heroic daylami recruit Amir charges into the open and downs an enemy Grenzer with his panzerfaust. 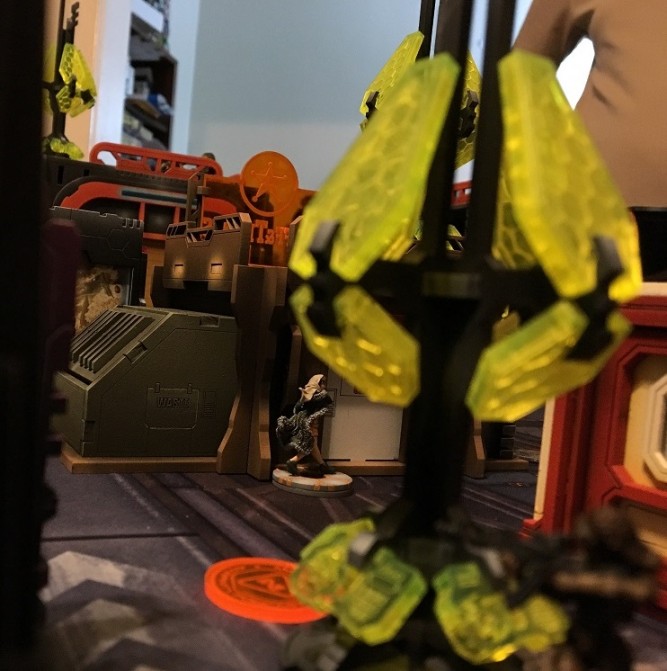 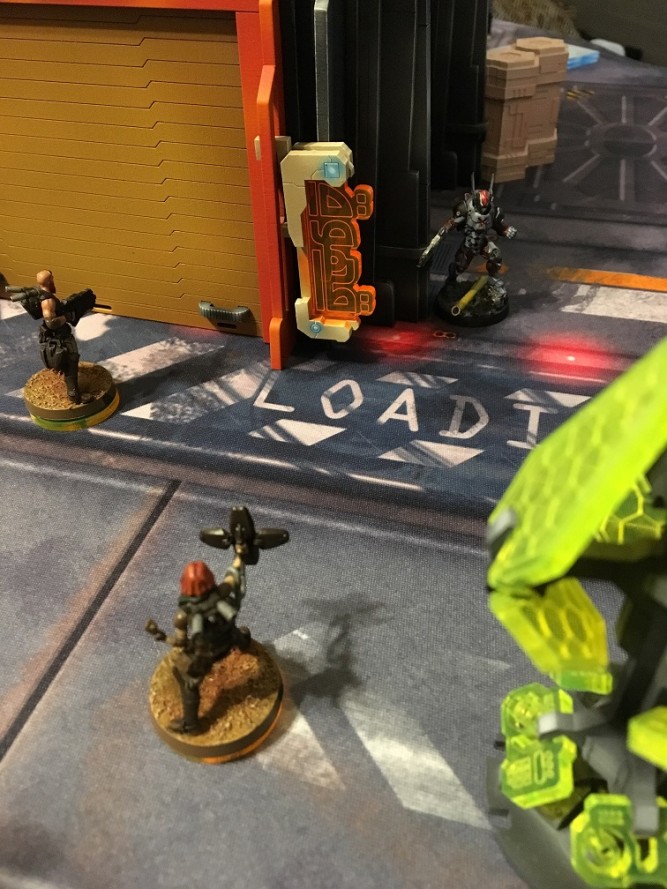 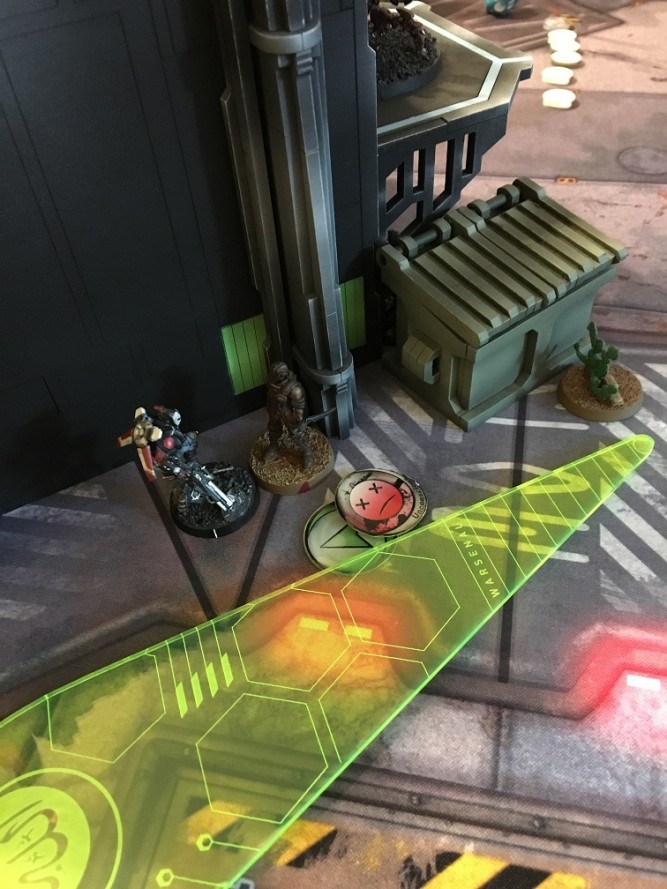 An outraged hellcat appears, shoots down our rafiq remote and fiday, and then gleefully plays in the brain pan of our fiday (coup de grace) before the fiday's mine vaporizes him.

A variety of small engagements played out after that as detailed in the above after action slide show. We drove the Nomads nearly into retreat from the field before we both received orders from our respective commands to cease our hostilities at once.

I ordered my troops to cease fire, but knew at this point that even though we prevailed we would be paying reparations to the Nomads for the damage caused. Minus of course the costs incurred by our force at the hands of the hastily organized and misinformed task force. Nevertheless, we had opened the communications channels we needed, and hopefully our interactions with the Nomads would proceed more smoothly from this point on.

Epilogue: The Trials and Tribulations of Husam Yasbir 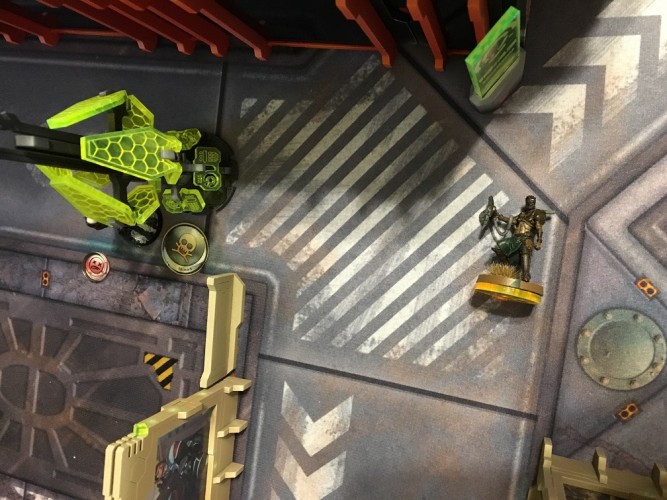 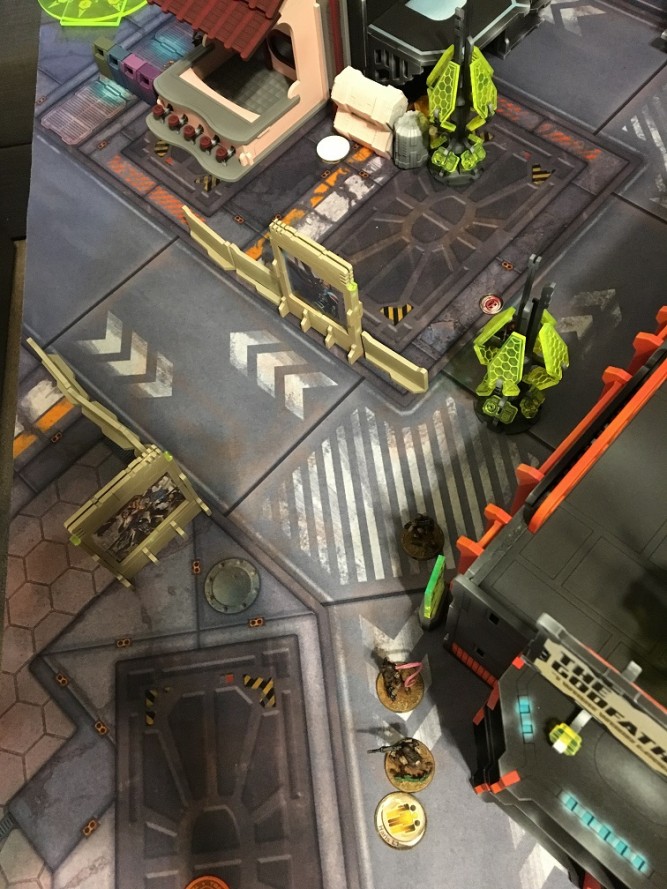 "Dammit I'm telling you it's a mine, look you morons!" 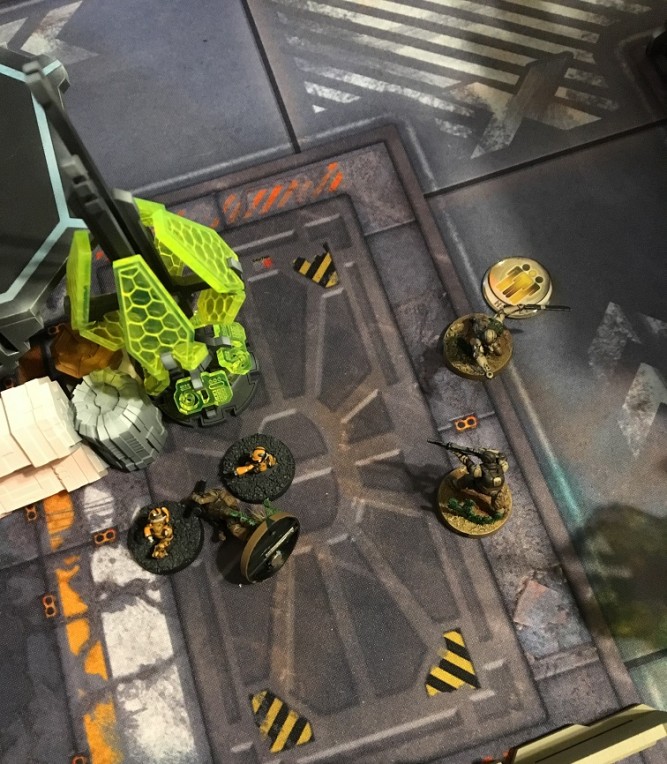 "No Hussain, don't do it! They're not really offering hugs! Husssssssssain!!!!"

When the legendary Husam Yasbir shows up, you give him what he wants and wait for the fireworks. Yasbir seconded two of my Muyibs, linked up in a haris team, activated his holoprojecter to display a beefy spitfire and a less beefy physic, and moved to secure our left flank. He spent most of the fight securing our flank and not moving forward, but towards the end he charged forward to eliminate the Nomad liaison officer. Apparently it was better if they forgot their's too. However, he had a slight mine problem.

A ghazi muttawi'ah was sent forward to investigate a shimmer near an antenna, only to have the encroaching zero drop a mine at his feet. The ghazi was ordered to trigger the mine and dodge out of the way. He completed...one of those tasks.

The haris team moved forward, and Yasbir patiently waited for my two Muyibs to identify and eliminate the second mine in their path. But they couldn't (14). Do it (17). Exasperated, yasbir dropped his holoprojecter, identified the mine, and removed it from the field. With the second obstacle removed, yasbir sent one of the Muyibs to eliminate the crazy koalas protecting the Nomad left flank. I don't think he expected a Muyib to yell "free hugs!" and charge to his death. I think we may need to invest in some counselors for our deadly assassins. Shaking his head, Yasbir charged forward and eliminated the Alguacile forward observer serving as the Nomad liaison.

Given the comedy of errors he observed while with my force, I can only hope that our ultimately victory over the Nomads will soften his report. No self-respecting hassassin wants to be accused of such dull witted, Panoceanian-style "shenanigans."