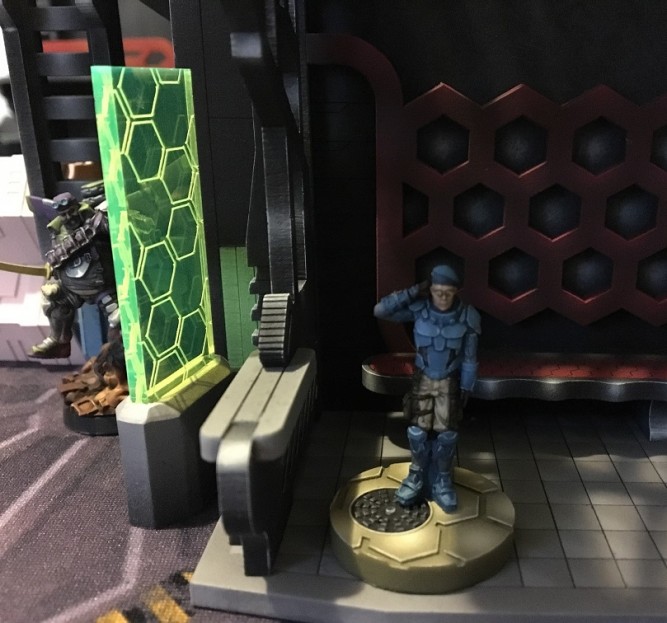 Just waitin' on the ol' spacebus, minding my own business... 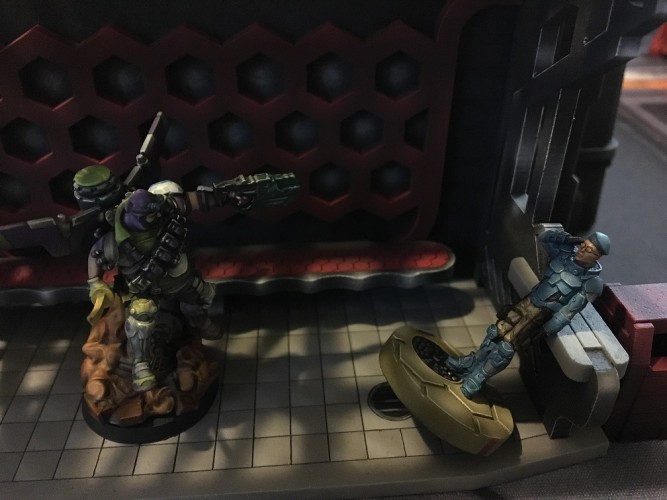 Billy Joe is not a nice person. He continues to harass Angus, this time simply giving him an old fashioned jump scare while Angust waited harmlessly for the bus. But this time, Angus wasn't going to take it, no sir! Making a quick withdrawal from the suddenly hostile bus stop, Angus rushed for the nearest communications console and send a quick...cypher...to an old contact of his in the Nomad Nation, Lupe Balboa. Lupe owed him a favor from that one time, way back, when he didn't screw everything up, and she had said she owed him one. Well, here come the Nomads.

A scant 15 minutes later, a massive Nomad Iguana burst through the wall of the hanger bay, venting the area to space and causing a hasty scramble for respirators and firearms. Unaware of the injury to Angus' pride and the presence of the Nomads as a yuan yuan hunting force, I deployed my available troops and irregulars to counter the sudden attack. 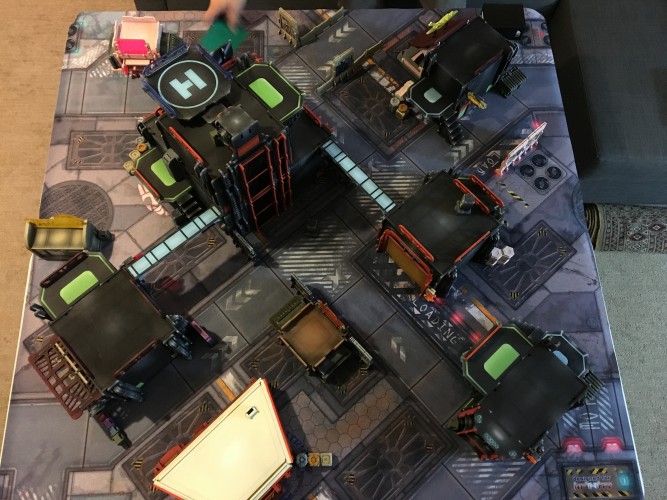 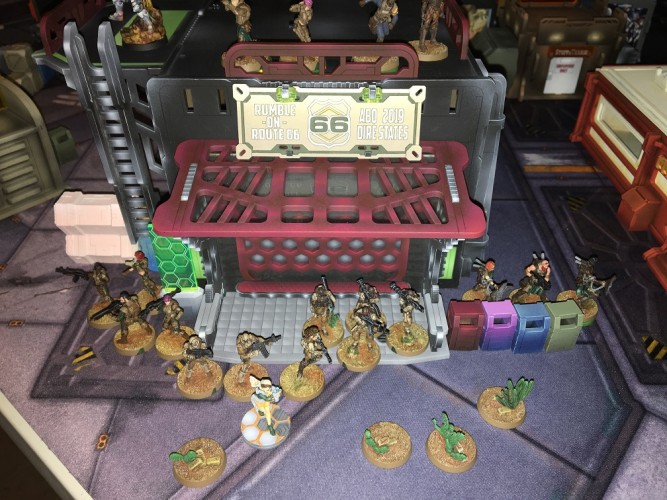 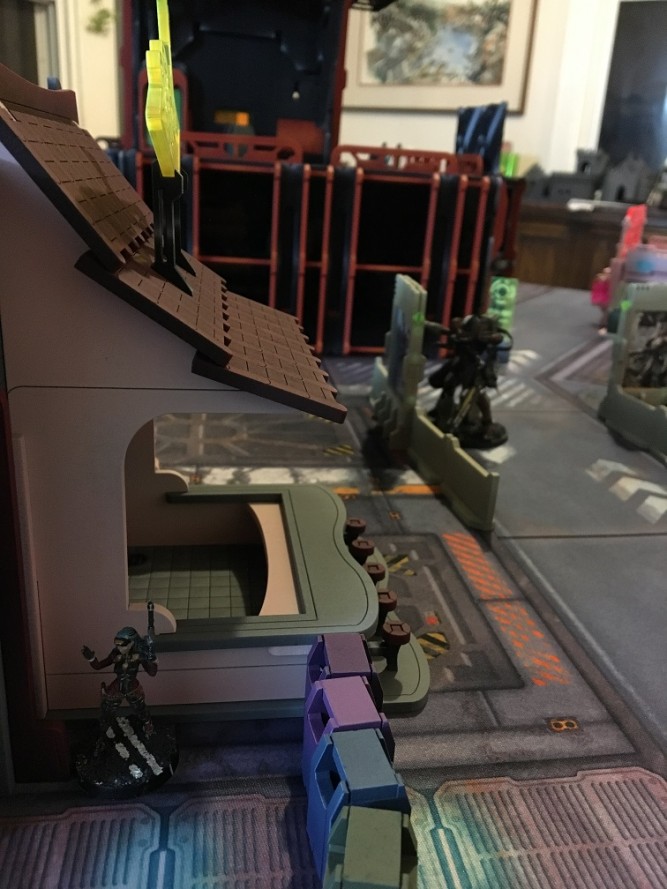 A Nomad Interventor and Iguana move into defensive positions and brace for the Haqqislam attack. 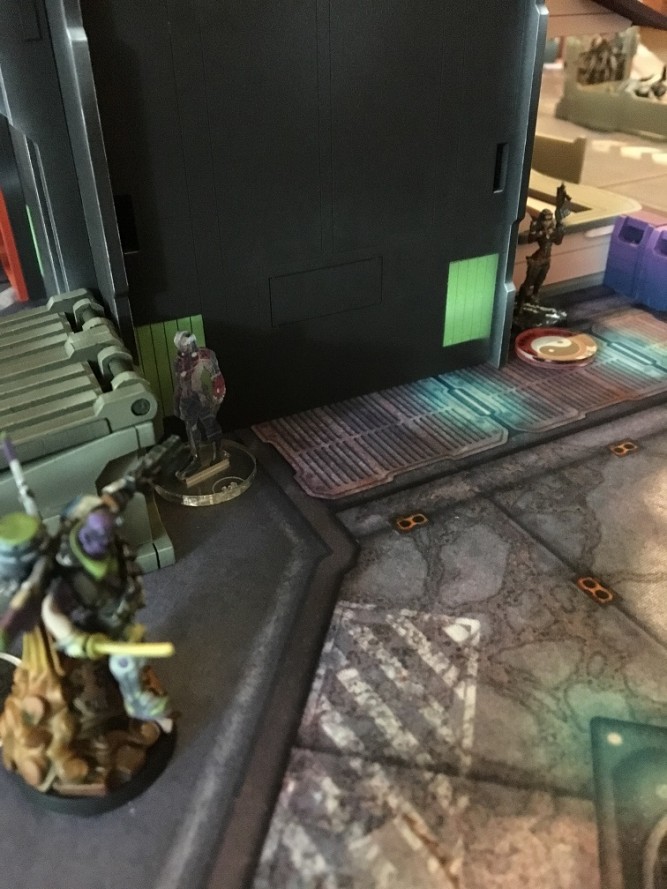 Billy Joe blasts an enemy Intruder and Interventor with his chain rifle again and again, to no avail. 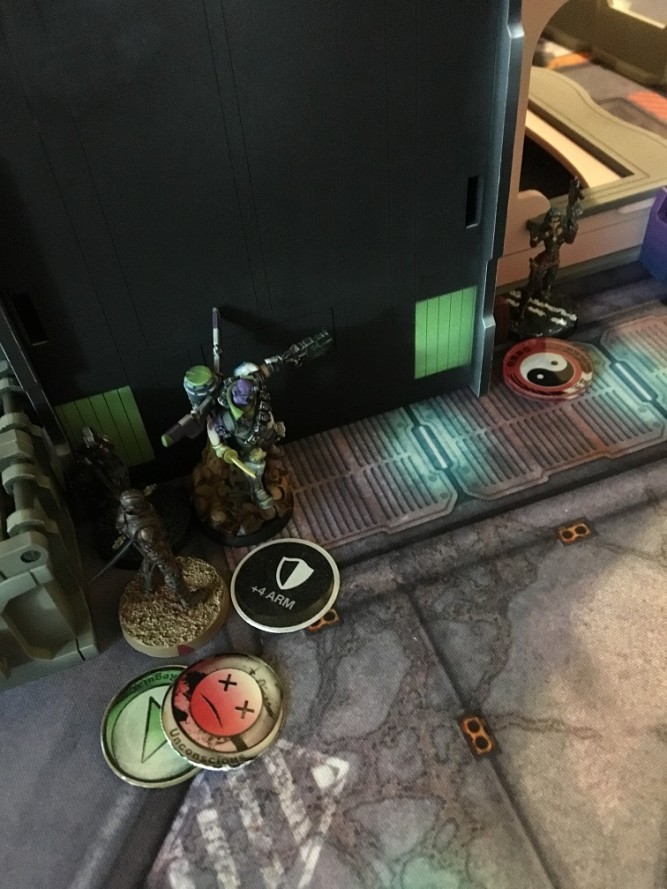 Even with assistance from my recently decanted fiday, neither combatant could bring down either of the Nomads. 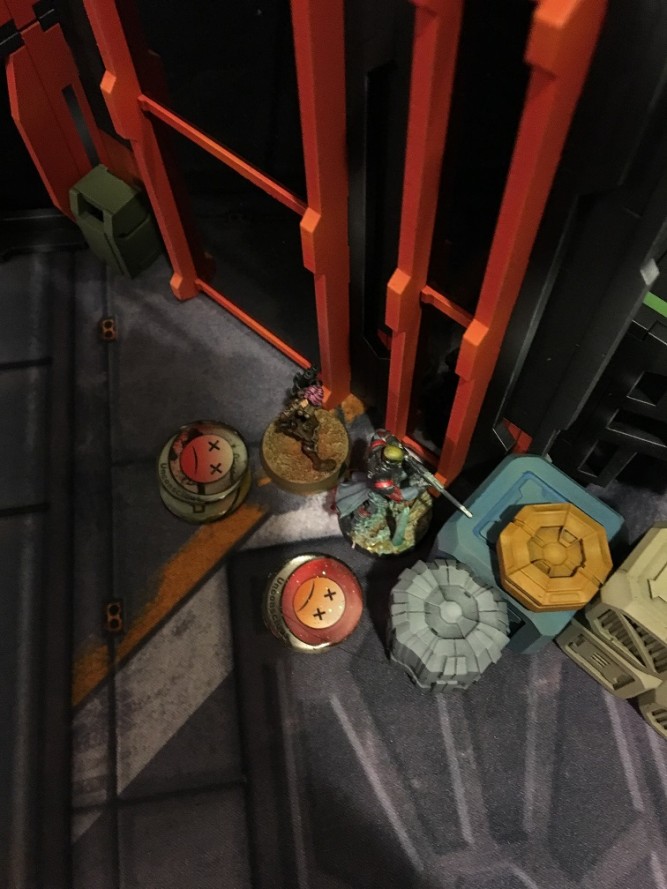 On the left flank, an inexperienced daylami nevertheless downs a Grenz trooper before disabling her own respirator and succumbing to the vacuum.

The battle kicked off with what I can only describe as a comedy of errors. Billy Joe charged onto the field of battle and made straight for fusilier Angus, blasting his chain rifle all the while. He landed several hits on an enemy intruder before engaging the Nomad commando in close combat, where even swings from his "hefty" arms could cause no damage. Seeing a critical target in the Intruder, I ordered our fiday into the scuffle, but he was shot down by the Interventor despite his close quarters use of his shotgun.

On the left flank, I ordered a daylami irregular forward to engage a Grenzer forward observer before he could begin to triangulate our force. She moved behind him and opened up with her light shotgun, but it was such close quarters that the butt of the weapon struck and disabled her respirator. She put the Grenzer down even as she succumbed to the cold vacuum of space. 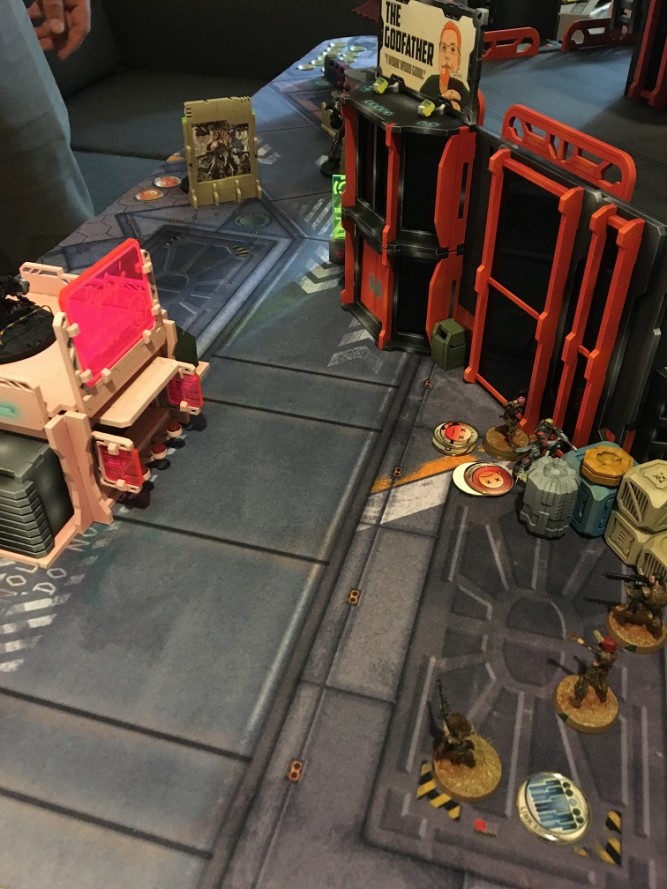 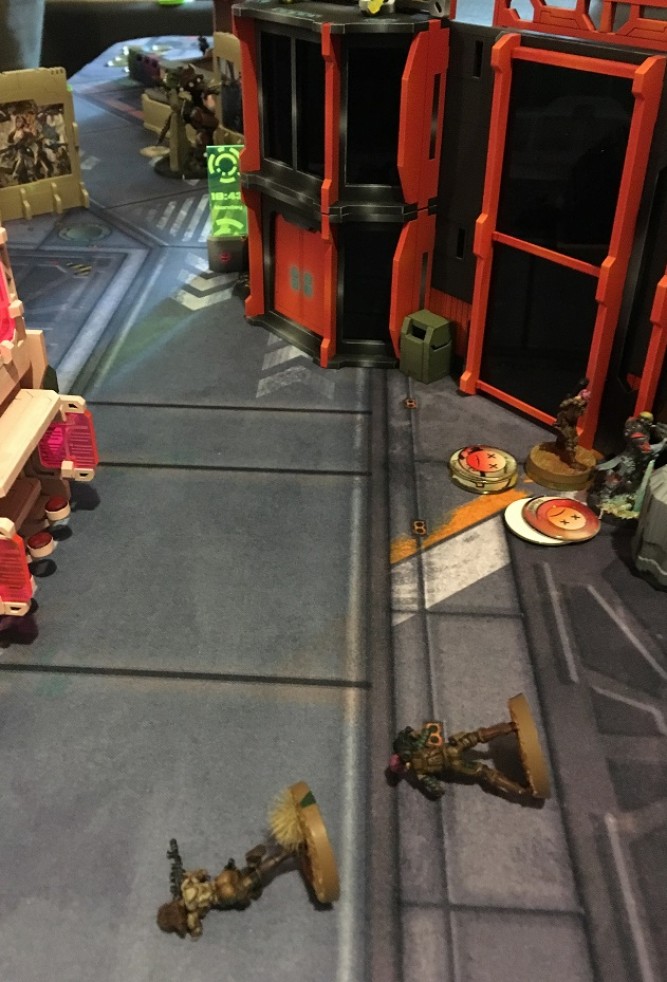 ...but she and another member of the link are quickly gunned down by carefully placed single shots from the Iguana TAG.

With the Grenzer down the Ghulam team moved up the left flank. Leila Sherif was able to neutralize the enemy tsyklon before its feuerbach could be brought into action, but the team was stopped cold by the Iguana. The enemy TAG put carefully aimed shots into both Leila and the Ghulam wielding the missile launcher, leaving Leila dead and the Ghulam bleeding out. With their advance halted, the remaining three Ghulam fell back into cover to regroup and defend their ground. 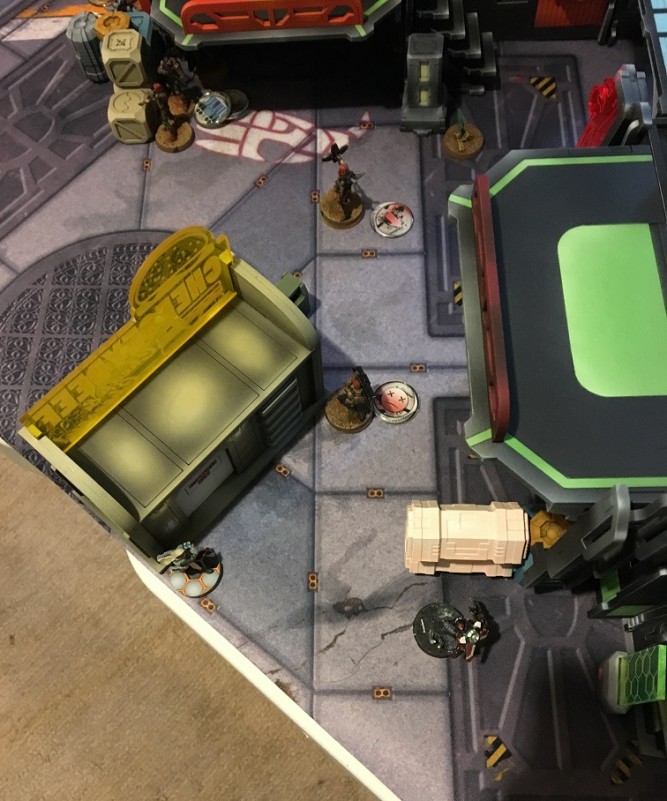 A Hellcat drop trooper starts to roll up our left flank, but cannot quite reach the Ghulam team. 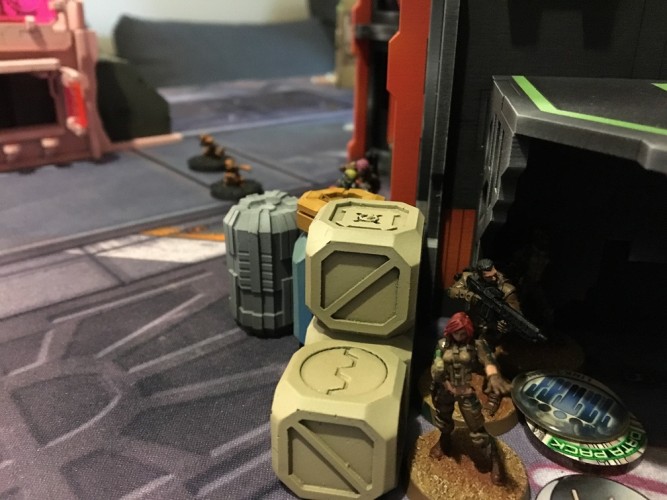 The Ghulam remain concealed as the skitter of crazy koalas is heard close by. 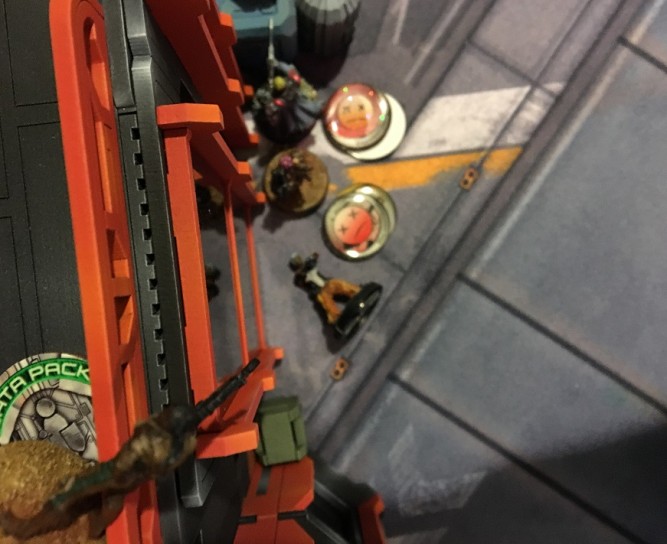 Maximum effort: the Ghulam rifleman leans out and eliminates a Nomad Clockmaker for her third kill. 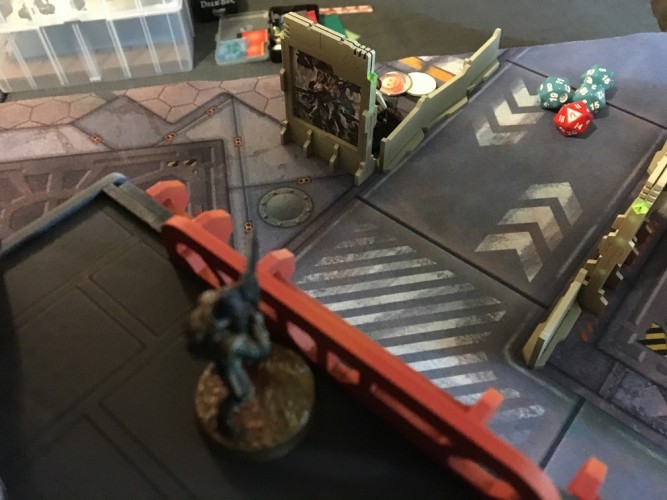 I finally get a shot with my heavy machine gun, eliminating the enemy lieutenant and knocking off my own respirator in the process. After being revived by the team's doctor, I eliminated the enemy Tsyklon (yes, again) and then took cover while the Muyibs went to work.

Despite our seizing of the initiative in the early stages of the battle, the Nomads hit back hard. A Hellcat assault trooper appeared on our left flank and was able to take down a daylami trooper and a ghazi muttawi'ah before a quick thinking Ghulam with a rifle put him unconscious with a quick burst of fire.

On the other side of the Ghulam, an enemy Lunakod approached and directed it's crazy koalas to within boost range of the Ghulam team, necessitating the expenditure of our last remaining ghazi muttawi'ah soon thereafter to clear the koalas before being knocked out by shotgun fire from the lunakod.

However, with the koalas cleared the brave Ghulam again directed a barrage of rifle fire at the enemy remote, rendering it into scrap. With these threats removed, the team was able to scale the nearby crates to take up position on the central hanger control tower, which in turn gave the reduced team a single chance to down the enemy Interventor and thereby throw the remaining Nomad force into confusion. 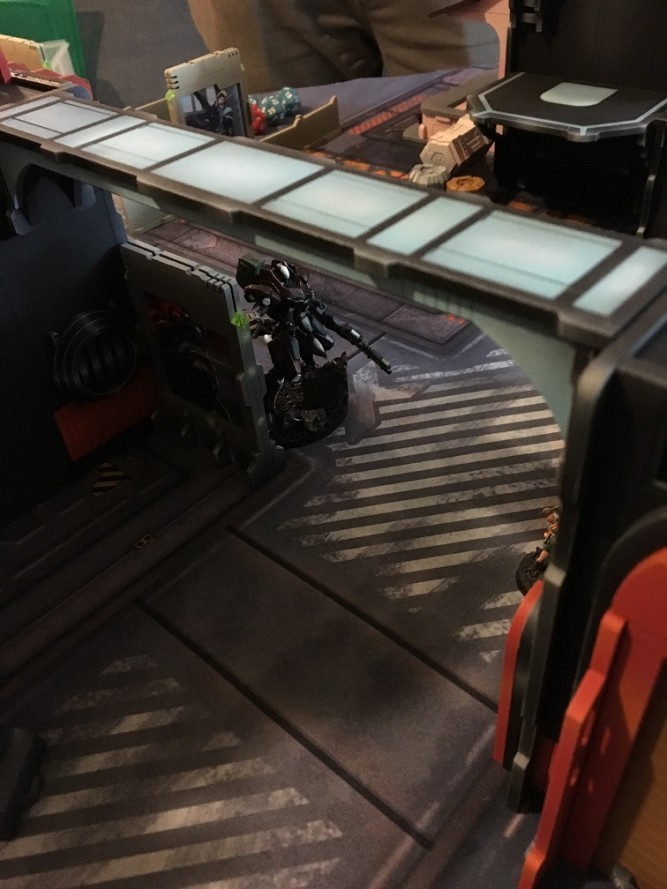 The enemy Iguana considers its options. 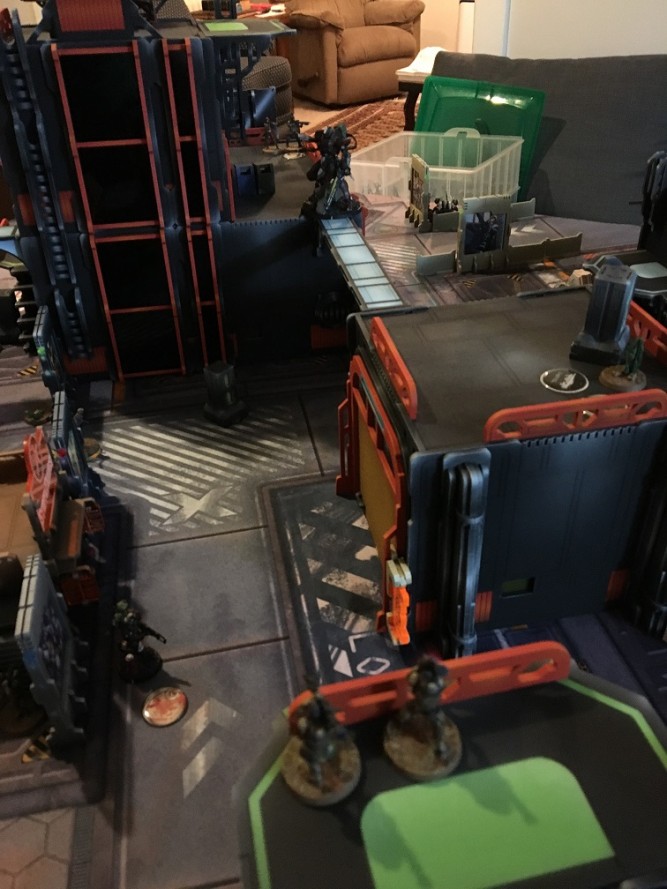 And climbs a wall under heavy fire!

The battle began to wrap up once the Interventor lieutenant finally went down. The muyibs eliminated the enemy intruder on the right flank, and the enemy Iguana was left with little option but to charge forward and seek to kill as many troops as possible.

Holstering its massive HMG and beginning to climb, the Iguana climbed towards my team and I but was blasted to pieces by the Muyib team and its heavy rocket launchers. The operator was clearly not expecting this, as he was flung into an open courtyard and quickly eliminated by the remaining Muyibs (although yet another trooper was lost to a respirator failure).

In the end, this appears to be another foolish, Angus-instigated battle (or at least escalation) that neither the Nomads or Haqqislam benefited from. We gained nothing but causalities and debt from this sortie. In the future the Nomad and Haqqislam nations must continue to work together and seek the betterment of the sphere. When we fight, it only allows the lurking alien menage to gain strength, even as we are weakened. 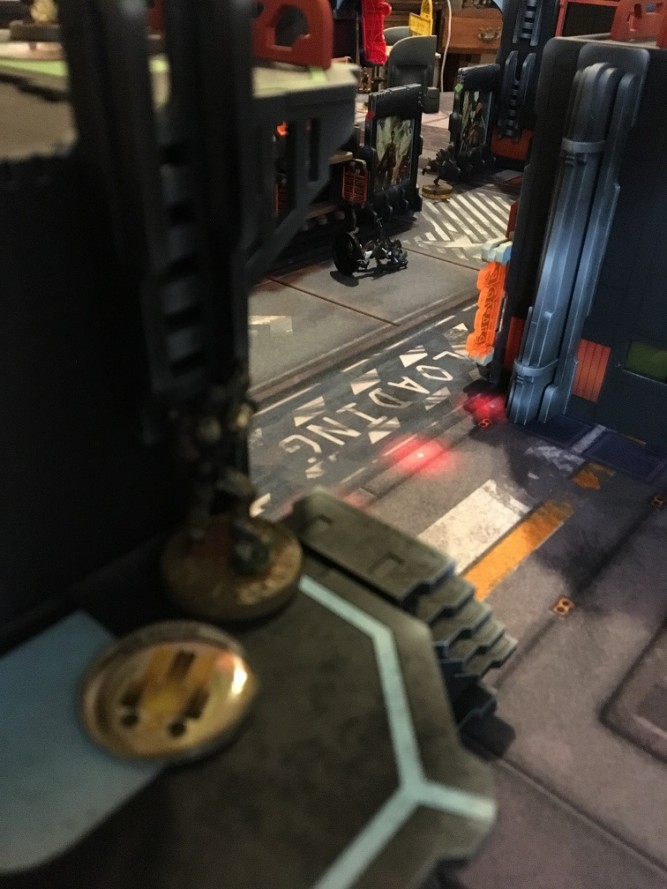 The Iguana operator is finally eliminated by the Muyib Team, but not without another respirator-related casualty. 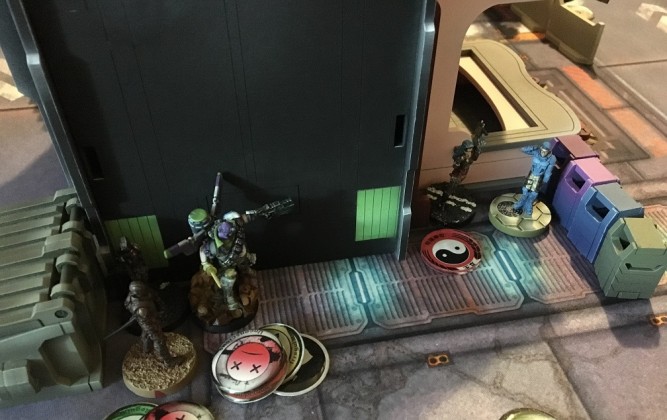 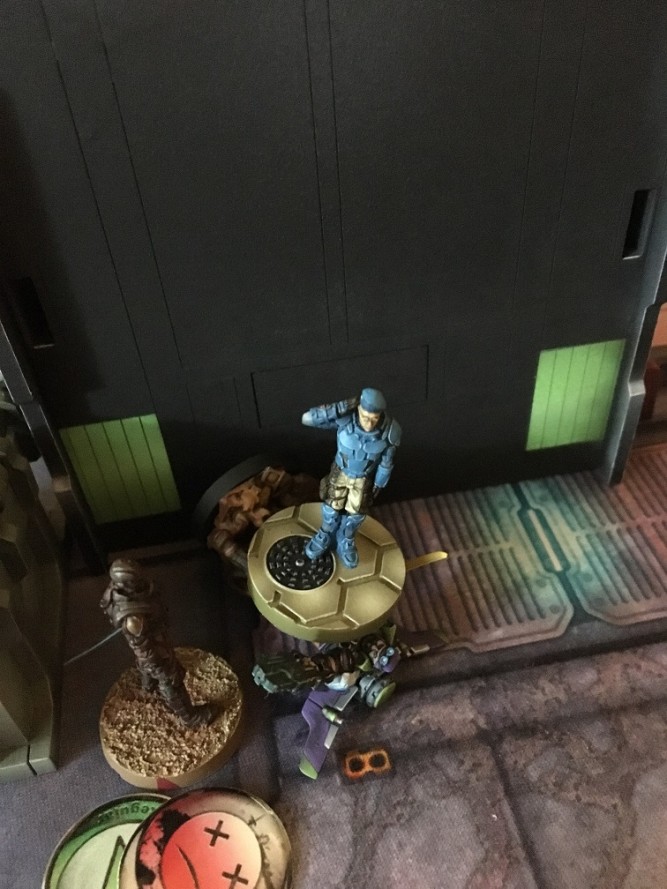 "My mother is a beautiful and respectable woman!" *skull crunching noises* 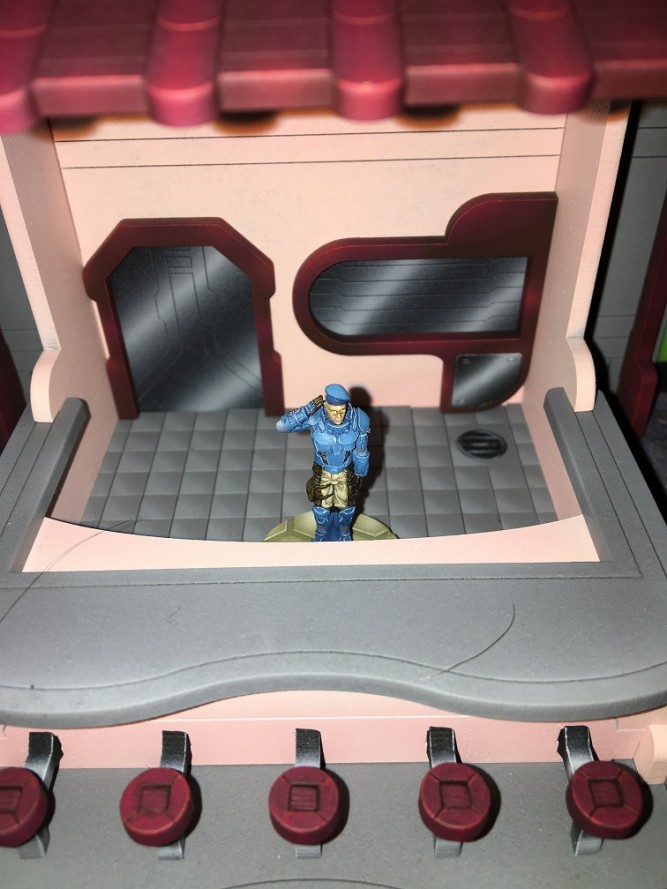 "Oh boy, that sure escalated quickly!"