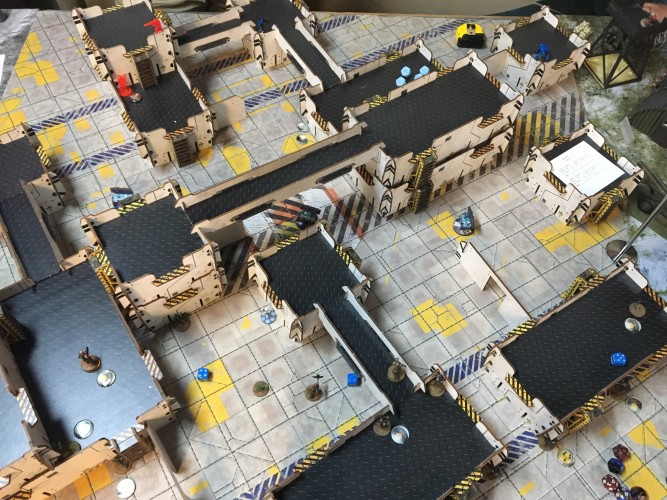 Shortly after returning from the the grassland arcology, we were summoned once more to fight the second prong of the Military Order’s assault on the traffic control, this time in the mezzanine level. 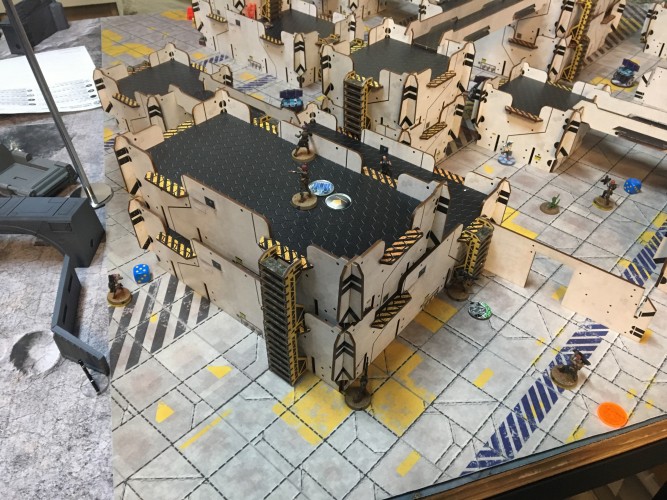 The GhulamTeam struggles to hold an entire crusader link at bay on the left flank. 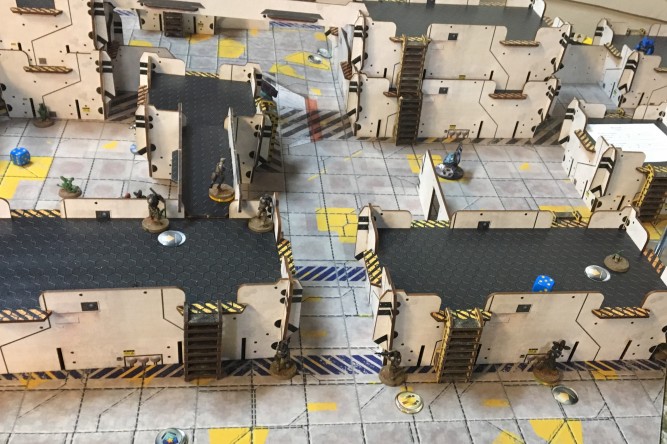 Muyibs and daylami rush into the fray to support the Ghulam regulars.

OOC: This was game two of Arizona Armageddon IV. The report is a bit light on pictures, as I was pulling my hair out fighting MO. We played Unmasking.

We knew we were in trouble when we arrived. Having just returned from a fight against the Military Orders of Panoceania, we had barely returned to our staging area when we were called out for a second defense of our home. This time we faced a veritable who’s who of the PanO Knights: Joan of Arc, Gabriel De Fersen, and the knights of the hospitaller order. We held them off, but more with an overwhelming amount of bodies than with any particular tactical nuance.

On the left flank our Ghulam team took up overwatch positions against the lesser members of the order, while the Muyibs charged straight into the fray on the right. A brutal exchange of fire ensued, with a single hospitaller finally being neutralized at the cost of several daylami, our fiday, and all but two Muyibs. Despite this sacrifice, the heavy knight was revived by their doctor anyways.

The reformation I’d their team did slow down the PanO Force, and this allowed us to seize the initiative. Despite taking casualties, our Ghulam team was able to brute force its way though this link team after a lone Muttawi’ah charged the team and froze De Ferson up with a blast from his E/marat. The doctor and heavy gunner went down first, and Joan and the remaining hospitaller beat a hasty retreat into cover. With the threat of the enemy link removed, I ordered the Ghulam team forward to access the enemy data terminals and determine the location of the intended PanO infiltrator, three of which appeared to have accompanied the PanO Force.

The Muyib team is slowly whittled away by heavy fire from the knights. 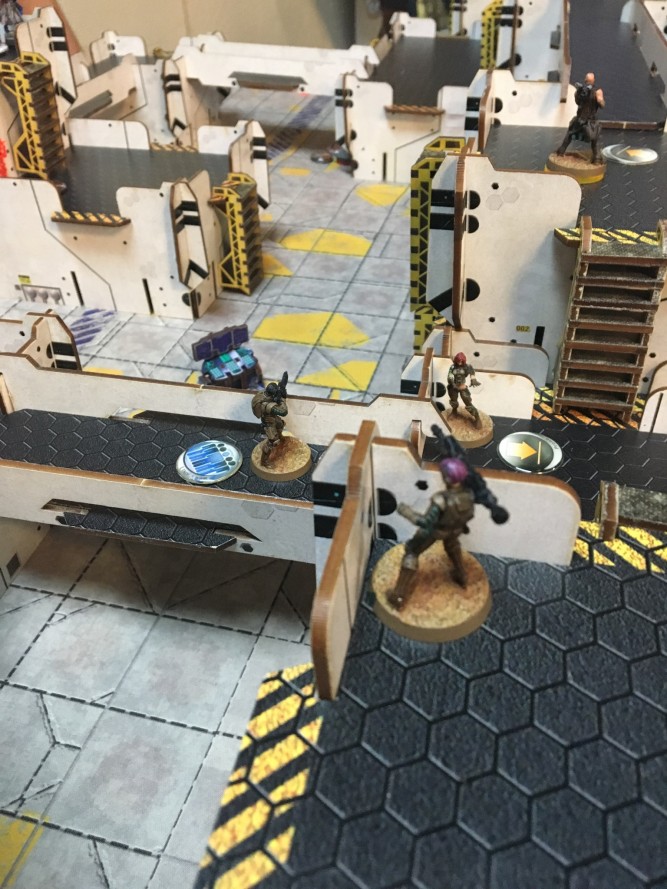 The Ghulam team prepares to move forward to unmask the PanO spy.

The Ghulams moved up the field, and were able to eliminate a pair of order sergeants in thermo-optic camouflage and non-lethally subdue a lurking war correspondent.

We quickly determined that the civilians on the left flank and in the center were decoys; dupes given a stun pistols and encouraging words by PanO. However, we finally discovered the PanO spy: he was on the right flank being protected by Joan of Arc. The Ghulam team dashed across the field, and win a lost ditch effort they sacrificed themselves to Joan’s suppressive fire to take the spy down with concentrated blasts of shotgun fire.

With the spy down, the remaining PanO forces retreated, their mission failed and their force in tatters. We were little better off. Despite our victory I had lost the majority of my men, and with the supply of lhosts critical, many of them would wait months or even years for resurrection. I had made up my mind: it was time to recommend a cessation of hostilities on Novvy Bangkok. The Hassassin Bahram could no longer maintain the level of casualties we were taking in the Novvy Bangkok conflict, and our investigations into PanO and Ariadna has been completed. We need time to recover, and to mourn our dead.