Disclaimer: My opponent had the WORST luck in this match, while I seemed to have received the blessing of the indomitable ARM rolls. In fact after round two he was somewhat disgruntled, but he took it well and played till the end. Also I forgot to take pictures of my deployment zone, sorry for that.

Prologue:
Fatima was scouting ahead of Commander Mustafa’s new unit, the Dukhan Mobile Division. Their objective was (officially) the armored protection of haqqislamite units withdrawing from the Xaraks Batteries. As she looked through her binoculars, she managed to make out a few movements at one of the comms centers of the Battery Fields, in particular one hulking figure with two massive cannon at its shoulders. Fatima knew instantly from her time of Paradiso: This is an Overdron, big damn trouble. Immediately she contacted Commander Mustafa, who replied in a sardonic tone: „Well, officially we shan’t attack installations on the Battery Fields, BUT this Overdron and the other CA units are a serious danger to our „retreating“ troops. Concerning our Rules of Engagement, attacking these aliens in this specific position could be considered unproblematic. Also I would like some payback for the assault on Pakngein.“ So it was clear, the strike would commence soon, with Fatima as the vanguard, just like the last time she was here. She prayed for a minute, hopefully she would be able to make it, just like last time.

The haqqislamite Assault began with the four Ghazi of Dukhan Mobile Division, storming forwards yet outside enemy view. One of them (Ghazi 1) succesfully placed a smoke Grenade in front of her, between the edge of the table and the apartment building. Ghazi 1 then moves into the smoke, and manages to get into jammer range with the Samaritan and one of the Morat vanguards. Ghazi 2 rushes towards the Watchtower and tries to throw a smoke grenade between the apartment building and the Watchtower, he fails miserably at that and takes a crit from the Maakrep with DA ammo, fails his ARM roll and falls dead. Ghazi 3 then moves forward and tries to succeed at that which Ghazi 2 couldn’t , he successfully deploy the smoke grenade, but also takes a hit from the Maakrep with DA ammo, failing one ARM roll, he goes unconscious. Ghazi 4 moves forward and tries to throw a smoke grenade, but gets hit by the Rodok hacker behind the crate, failing her ARM roll, she goes unconscious.

The Maghariba Guard moves forward into the smoke between the watchtower and the apartment building, then idles. Fatima the Hunzakut discovers herself and makes surprise attack against the Maakrep and Rodok, no hits are scored between Fatima and the Rodok, but the Maakrep hits with a shot of DA ammo, against which Fatima saves on a 19 and 17, but fails her guts roll and goes prone.
The Ghulam Liaison moves forward two times, no ARO’s are triggered. The Maghariba Guard drops into suppressive fire. Fatima moves back and stands up, shooting again at the Maakrep, she scores no hits, but takes another one with DA ammo and succeeds again on her ARM rolls on a 20 and 17, but also fails her guts roll again and goes into total cover behind the stairs. The Ghulam Liaison moves towards the ladder on the watchtower, into the smoke and goes prone in front of the ladder. The Ghulam Doctor moves forwards, and shoots a MediKit into Ghazi 4 who manages to stand up again. The Ayyar and his Holoechos move and dodge against the Morat Vanguard, who can can see them through the small gap between the smoke and the apartment building. The Morat scores a hit on Holoecho 2 (the real Ayyar), against which the Ayyar saves on a 20, but is discovered nonetheless. After that the Ayyar moves two times into the apartment building.

The Ayyar goes back into Holoecho (as he is not seen by an enemy and in the reactive turn of Mustafa), the real Ayyar is Holoecho 1.

Ghazi 4 moves forward and jams the Overdron on a 14, who in turn fails his Reset and BTS Roll, getting isolated. But ghazi 4 takes one hit from the Rodok and one from the Maakrep, she saves both the Sniper shot on 16 and the boarding shotgun on 18 on her ARM roll. Ghazi 4 then moves forward and shoots, splitting the burst of her boarding shotgun between the Rodok and the Maakrep, scores no hits and takes one from the prone Maakrep, she fails one ARM roll and goes unconscious.

Maggie shoots back at the Overdron with AP ammo and scores one hit, against which the Overdron saves on a 15. The Barid Hacker activates Supportware: Controlled Jump to assist the Ragik Hacker. The Ragik tries to deploy using AD: Combat Jump, triggering the Umbra Legate to try to hack his dropship, both fail miserably and the Ragik disperses off the map, deploying in base contact with the edge of Mustafa’s deployment zone. Maggie shoots again at the Overdron with AP ammo, takes one hit from it, but saves both the ARM and BTS roll. Maggie shoots again, but neither her nor the Overdron score any hits. The Ayyar and his Holoechos move two times up on the internal ladders of the apartment building, going up two stories in the process, no ARO’s are triggered. The Ayyar and his Holoechos movs up onto the rooftop. Then real Ayyar discovers himself and uses Surprise Shot L2 to shoot his D.E.P. at the overdron. The overdone scores a hit, the Ayyar fails his saves and goes unconscious. Maggie shoots the Overdron again with AP ammo, scoring two hits, against which the Overdron fails one ARM roll and goes unconscious. The Ghulam Liaison moves up the ladder on the watchtower, arriving on the rooftop she goes in to base contact with the Tech Coffin. Fatima moves down the stairs and shoots at the prone Maakrep, she scores two hits and the Maakrep fails one ARM roll, going unconscious.

The AutoMediKit of the Maakrep activates, successfully reviving her. She also takes a hit from the light grenade launcher of Fatima but succeeds on her ARM roll. The Maakrep then shoots, splitting her burst between Fatima and the Ghulam Liaison, she fails to hit Fatima who in turn hits with her light grenade launcher, against which the Maakrep saves on a 20. While the Ghulam scores a hit with her flash pulse, the Maakrep fails her BTS roll and gets stunned. The MedTech idles and the Slave Drones both move two times, one Slave reaches the Overdron and one the former Morat Lieutenant.
The Slave Drone in contact with the Overdron uses Engineer to restore one STR point, succeeding on a 7. The Umbra Legate moves through the door of the objective room to the holo-ad in the street, then shoots at Maggie with his boarding shotgun, scores no hits and gets hit by Maggie’s heavy flamethrower, fails one and the subsequent ARM roll, burning to a crisp.

Maggie shoots the repaired Overdron with AP ammo, no hits are scored by either side. She shoots again, this time scoring three hits. And the overdron fails all three ARM rolls, going down for good. Fatima then moves up the stairs towards the Antenna, narrowly avoiding the Maakrep’s LoF and manages to get in base contact with it with her second movement (now in sight of the Maakrep). The Ghulam FO storms forward, intent on fulfilling the classified objective. He moves further forward into cover behind a planter and shoots at the Rodok Hacker, no hits are scored. The Ghulam FO shoots again, scoring two hits, but the Rodok saves against both, after that the Ghulam moves forward. He moves again, while the Rodok fails to shoot him and tries to use forward observer on the enemy HVT, failing on a 16. The Ghulam Liaison goes prone in base contact with the Tech-Coffin, facing towards the small opening in the balustrade for the ladder.

The Slave Drone uses Doctor on the former Morat Lieutenant, and manages to revive him. The Maakrep shoots with DA ammo, splitting her burst between Fatima and the Ghulam FO, scoring one hit on each of them. Fatima saves again on two 15s (3 ARM due to Cover) but fails her guts roll again and goes prone, while the Ghulam fails one ARM roll, going unconscious. The former Morat Lieutenant moves along the edge of the rooftop he is standing on, the shoots at the prone Ghulam Liaison, she uses her flash pulse, no hits are scored between them.
Finally the Zerat idles two times because my opponent didn’t know what to do anymore.

Controls the Tech-Coffin with the Liaison Officer (1 Point)

Liaison Officer not out of Deployment Zone (0 Points)

Epilogue:
Fatima couldn’t really believe it as she looked down her shirt: of three impacts with anti-material projectiles, the only injury she had of it were three big bruises. Her prayers either must have worked, or she was the luckiest Hunzakut ever. The CA forces - or rather what little was left of them - were in disarray, hurrying to get out of the area. The attack was a full success, and they found loads of good intel, especially the Liaison Officer. Thanks to her O-12 will receive probably enough to look over this little tactical assault. It seemed that despite everything, Xaraks would remain firmly in haqqislamite hands. 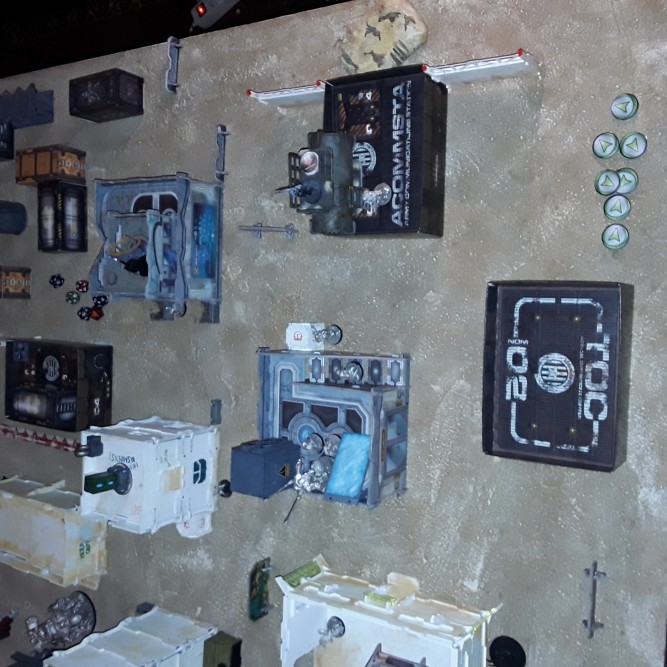 The most useless dude of the game. 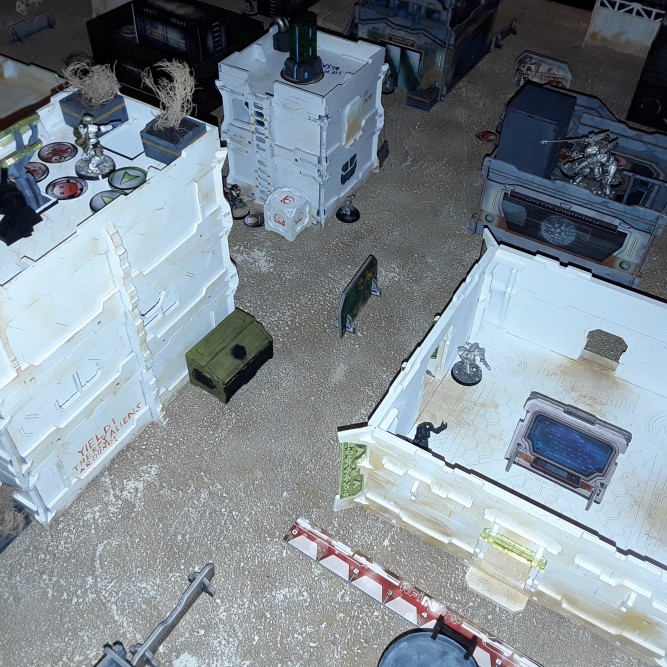 Well, turns out Surprise Shot L2 is not a solution for everything. 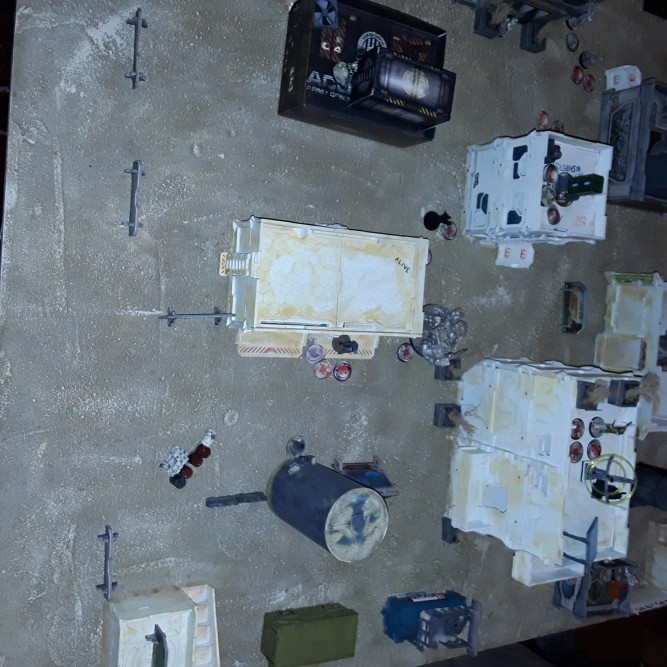 The central area around the watchtower was nothing short of a slaughterhouse.