Pakngein was boring, at least as far as Don Yuan was concerned. The Main Strip just had more of the good stuff: stabbing, robbing, whoring and gambling. But after all there was money to be made at Pakngein. Some Commander Mustafa had assembled a defense team for one of the civic areas of Pakngein, apparently the CA planned a terror strike on said areas. The implications of this didn’t bother him or his companion Yuanina one bit, their objective was simple: When the shooting begins, jump down into the back of the enemy through the hull breach and kill any alien that moves. He readied his trusty shotgun as their shuttle approached the hull breach, a green light switches on, it’s go time.

The CA assault begins with the Oznat storming forwards into the direction of the Kaplans and the Sekban. The Maakrep moves forward on the building she is standing on, to get into partial cover and a better attack vector. A Morat Vanguard follows the Oznat, but gets shot at by the Al’Hawwa Sniper, the Morat dodges with a crit and moves into cover behind a balustrade. The Maakrep reacts unfazed by the appearance of the Al’Hawwa and easily shoots her down, scoring two hits against which the Hawwa fails both her ARM rolls. The Oznat then charges onward into the eastern square, facing no enemy reactions. The Morat Vanguard moves from his current cover to partial cover behind the balustrade of the stairs of the Q-Building with the eastern Panoply. The Sogarat moves forward on the garage to get a better attack vector.

The Rodok spend two Orders to move over the Q-Building he is standing next to using super jump. But arriving at the ground as he jumps from the Q-Building, he takes a blast from the boarding shotgun of the camouflaged FO Al’hawwa, the Rodok manages to score a hit on the Infiltrator, who goes unconscious. After this, the Rodok uses another two orders to super jump in a relatively straight line along the western pathway.

The Yuan Yuan with the chain rifle (Yuanina) uses AD: Inferior Combat Jump, to successfully deploy inside the CA deployment zone, nobody sees her yet, so no ARO’s are declared. The Yuan Yuan with the boarding shotgun (Don Yuan) also uses AD: Inferior Combat Jump to successfully deploy inside the CA deployment zone, a Nox trooper standing nearby fails to notice him and therefore doesn’t change facing. Yuanina successfully throws a smoke grenade toward the MedTech Obsidon, then charges into the smoke, the MedTech fails to change facing. Yuanina moves through the smoke and engages the MedTech, scoring a hit with her DA CCW she kills the MedTech, who failed both of his ARM rolls and also was the CA’s Datatracker. Don Yuan moves behind partial cover and shoots at the Nox, who just in time turned around to get hit in the face by slugs, going down into spawn embryo. But Don Yuan takes a hit from the Morat Vanguard, who just managed to spot him in peripheral view, scoring a hit. Don Yuan survives with a 17 on his ARM Roll, but fails his guts roll, going prone. The Kaplan Haris sets into motion, moving so that the Fireteam Leader gets LoF to the Maakrep, he shoots subsequently with his Spitfire at the Maakrep, scoring two hits, against which the Maakrep saves on 17 and 18. The Kaplan Haris shoots again with the Spitfire at the Maakrep, scoring four hits while the Maakrep misses, who subsequently fails two ARM rolls and falls dead, after which the Kaplans move forwards. The Kaplans now have LoF to the Oznat behind one of the planters and shoot at her with the Spitfire and scoring three hits, the Oznat tries to use her smoke grenade launcher, but fails at that as well as one of her resulting three ARM rolls, going unconscious, after which the Kaplans move again.

The TR Kameel moves forward two times, triggering no ARO’s. It moves again, to gain LoF to the Rodok and shoots at him with the underslung light shotgun, scoring two hits, against which the Rodok fails his ARM rolls and falls dead. After this, the Ghulam FO uses two Orders to sprint along the western pathway.

Ko Dali drops successfully into the haqqislamite deployment zone, the EVO Kameel fruitlessly tried to hack Ko Dali’s dropship, while the Az’rail failed to change his facing. Ko Dali shoots, splitting her burst between the Az’rail and the EVO Kameel, she scores one hit against the EVO Kameel which fails its ARM roll and goes unconscious (The EVO Kameel was the haqqislamite Datatracker), while scoring one hit on the Az’rail, who successfully changes facing and succeeds his ARM roll and Guts roll. Ko Dali moves into LoF of the Sekban, then splits her burst between the Sekban and the Az’rail, she scores three hits on the Az’rail who fails two ARM rolls and goes unconscious, and two hits on the Sekban, who saves both ARM rolls as well as succeeding his Guts roll. One of the Morat Vanguards in the CA deployment zone shoots at Yuanina, scoring two hits, against which Yuanina saves on a 19 and a 17, but she fails her guts roll, forcing her to jump into cover behind the Ashcroft Industries oil tank.

The Morat Vanguard on the eastern side moves up the Q-Building with the eastern Panoply, triggering no ARO’s. The said morat moves into contact with the Panoply, rummaging through it, but failing his WIP roll on a 19, he doesn’t find any equipment that is Morat sized.

Yuanina moves towards the enemies closest to her (one of the slave drones and a Morat Vanguard) and successfully throws a smoke grenade at her feet. Don Yuan engages the decongested slave drone and strikes it down with his Shock CCW. After that Don Yuan Moves into partial cover, and shoots at the unconscious Nox again, to destroy the spawn embryo , he succeeds at that with two hits, but gets himself hit by a piece of floating debris, against which he saves on a 20. Yuanina moves out of the smoke and fires her chain rifle at the Morat Vanguard and the Slave drone, the drone fails its ARM roll and goes down, but the Morat not only saves on his ARM roll, but also scores a hit on Yuanina with his pistol. She saves on her ARM roll, but fails her Guts roll. But the Morat had also thrown a 20 on the hostile environment roll, failing his ARM roll, he gets hit in the head by a free-floating smart toaster and goes unconscious. The Sekban then moves towards Ko Dali, drawing his trusty assault pistol, and firing his whole burst into the rogue human, who in turn fires her nanopulsar,
The Sekban scores three hits and saves on his BTS roll, while Ko Dali fails two ARM rolls and falls dead. Then the Sekban moves back to the building he was deployed next to. The Kaplans use two orders to move along the eastern square and on top of one of the smaller Q-Buildings.

The Ghulam FO uses tow orders to sprint farther along the western pathway, towards the enemy deployment zone, triggering no ARO’s. The Panzerfaus Ghulam moves two times towards the apartment building, No ARO’s. The she moves into partial cover at the foot of the apartment block and shoots her Panzerfaust at the Sogarat, she misses and takes a hit with EXP ammo, failing one ARM roll, she goes unconscious.

The Morat Vanguard at the eastern Panoply succeeds on his WIP roll and finds a Panzerfaust that is just right for him, then he idles for the rest of the order. The Sogarat moves two times, into a position from where he can drawn LoF to the Kaplan with spitfire.

The camouflaged Shrouded atop of the apartment building steps into action, moves towards the edge of the rooftop, and shoots at the TR Kameel, scores two hits against which the Kameel fails both ARM rolls. Then the shrouded moves farther along the edge and shoots at Yuanina, scoring three hits, against which she saves on a 20, 16 and 14, as well as succeeding her guts roll.

Don Yuan moves towards the nearest Morat, triggering no ARO’s. While Yuanina tries to engage the downed Morat next to her, but takes a hit from the shrouded, against which she fails her ARM roll and goes unconscious. Don Yuan, moves again, now seeing and subsequently shooting down the nearest Morat, who just managed to turn around, before taking two blasts of flechette. The shrouded sees this and takes a potshot at Don Yuan, who succeeds on his ARM roll and his Guts roll. The Kaplans try to dodge the impeding explosive round of the Sogarat, they fail, as well as the Sogarat who misses widely, after this, they move out of the Sogarat’s LoF. The Sekban moves up the ladder of the building he is standing next to and once up, shoots his heavy rocket launcher at the Sogarat, misses widely and takes a hit with EXP ammo, failing all three ARM rolls he is turned to paste. The Kaplans move, so that one of them (the Doctor) gets LoF to the shrouded, he shoots and misses every shot, while taking one hit from the Shrouded, failing his ARM roll and going down, breaking the link team.

The Ghulam FO moves, the shoots at the shrouded atop the roof and scores one hit, against which the shrouded fails his ARM roll and goes in Spawn-Embryo. Then the Ghulam sprints over to a container fully in the CA’s deployment zone, once in base contact, he succeeds on a normal WIP roll, fulfilling the classified objective Mapping.

To kill more lieutenants than his enemy (2 Points)

Acquired more weapons from the panoplies than his enemy (1 Point)

Epilogue:
Don Yuan was still alive as the sound of conflict died down, he lost contact with Yuanina and didn’t make himself any hope that she might have made it. This did not sadden him, it was the way that Yuan Yuans live: Fast, dangerous and mostly dead before 30. He made two good kills (he did not think that the unmoving Slave Drone counted as a „real“ kill) and survived , good enough. But the civilians in the attacked area were freaking out. Apparently, even though they suffered great losses, the CA proved successful in their terror tactics. A message went through the Comms of the surviving members of Börü SDF, a message from Commander Mustafa: „This will not stand! This aggression against our civilians will not stand Inshallah!“ 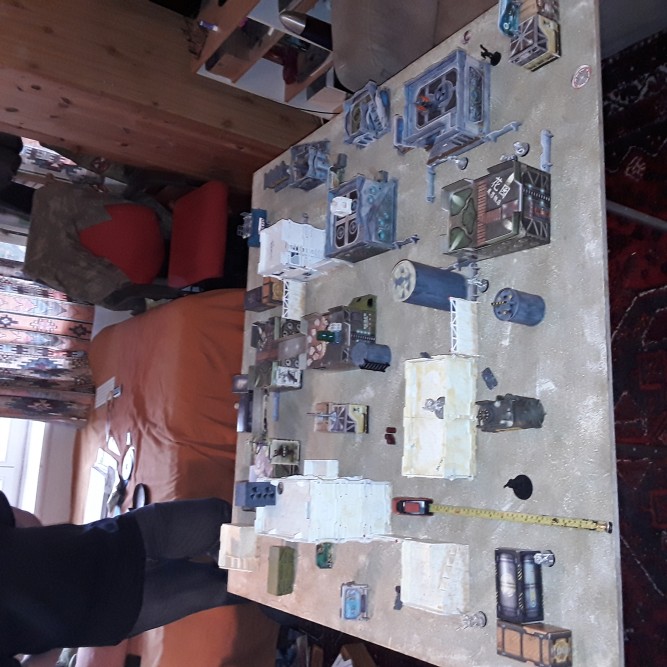 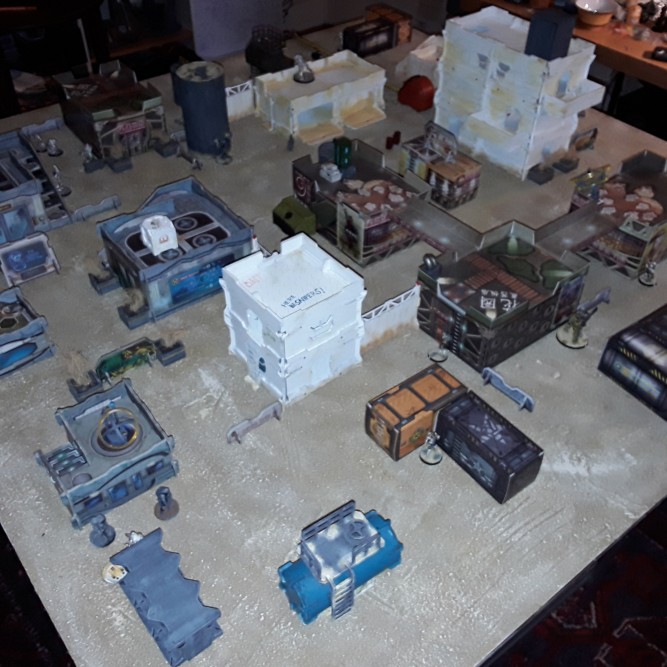 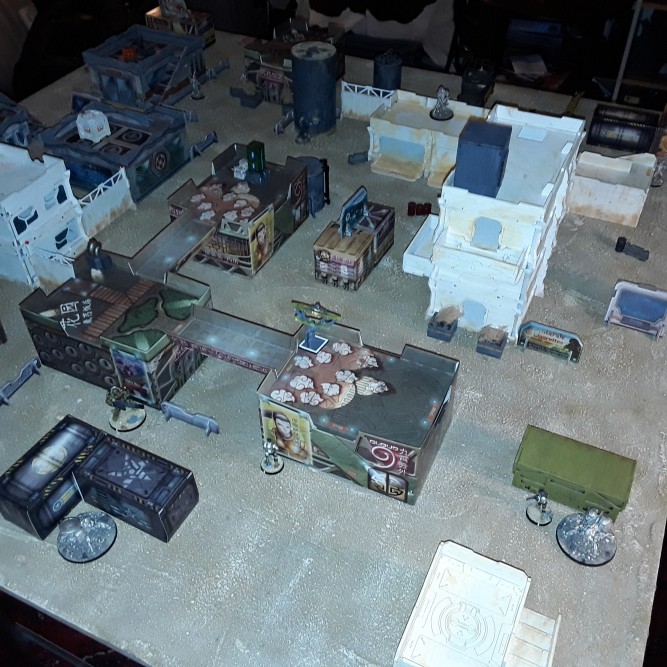 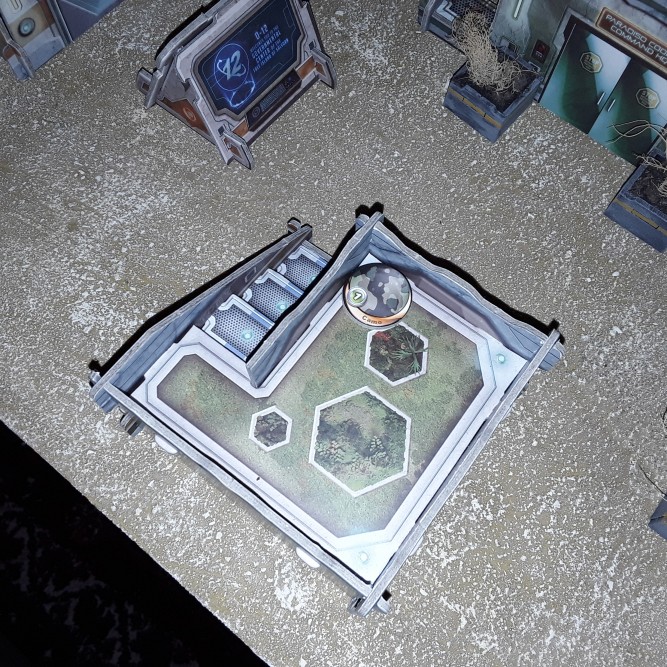 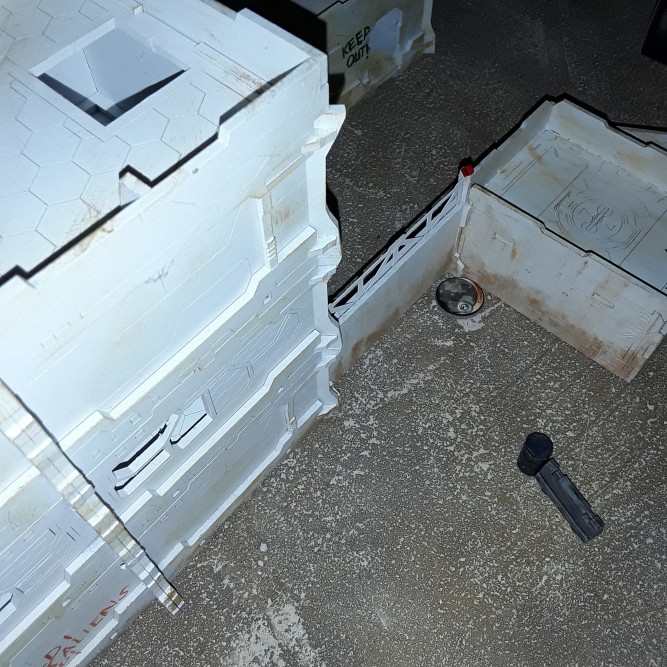 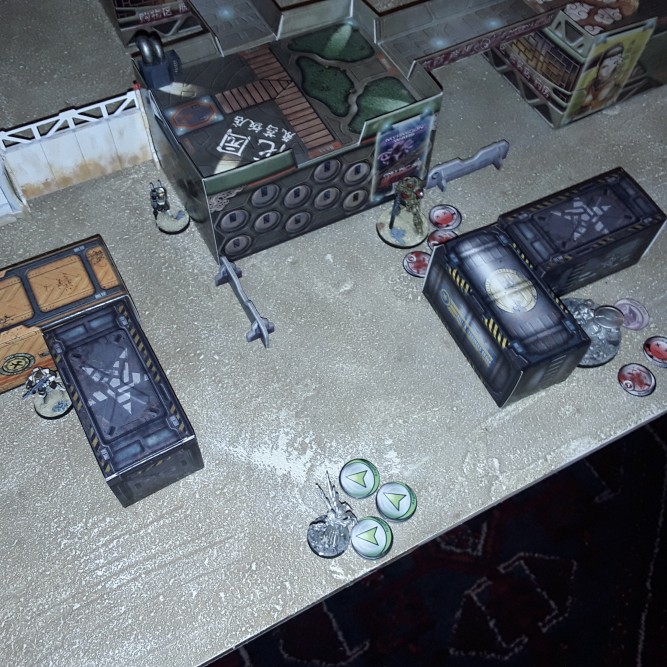 And there Ko Dali goes again... 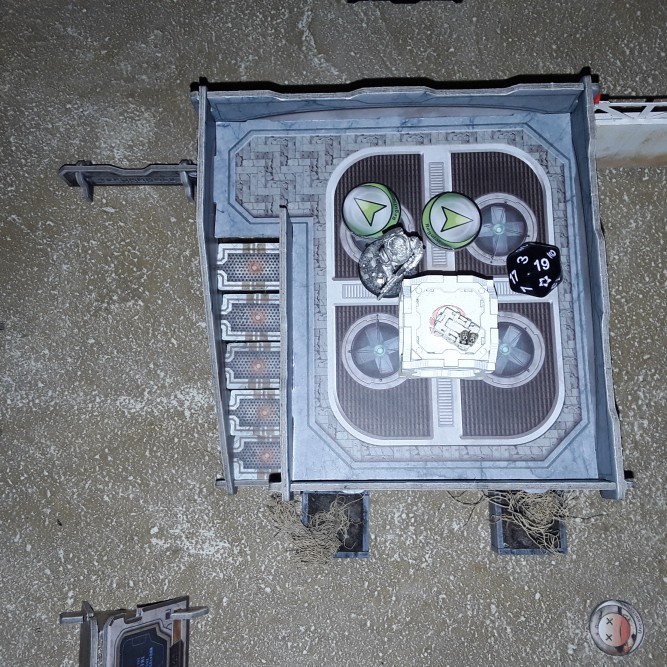 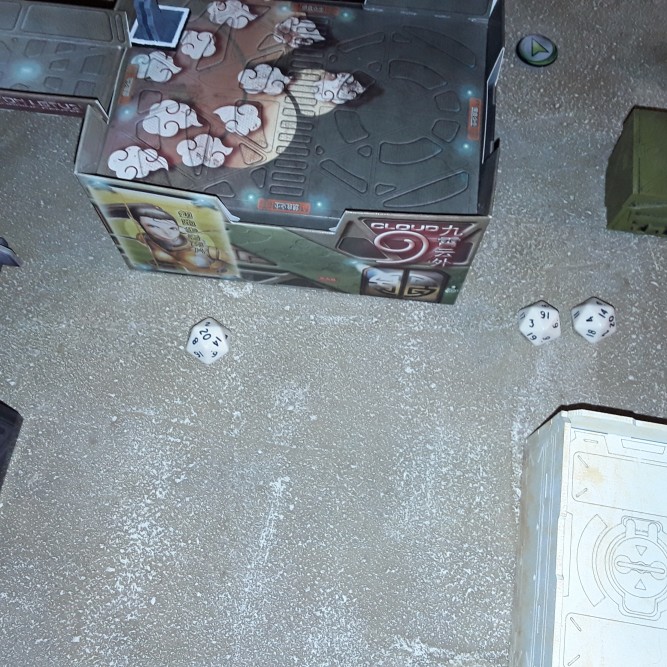