Fight at the Module

Another day sweeping the Ammunition Module. We heard from reliable sources there were more Shasvastii in the area and that’s exactly what we found.

We quickly took positions and attempted to hammer their overwatch pieces. Team Sirius taking positions in the center room removed a combined remote with ease. After that she attempted to engage another remote with a missile launcher, she was blinded by a flash pulse so she opted to retreat into the center room. Both of our gangbusters dropped their madtraps into stand by mode and waited for a retaliation.

Taigha creatures advanced through the streets and set off the mad traps, one made it into close combat with a gangbuster but was flash pulsed on the way in. A caliban moved through the center room and attacked team Sirius, killing the dog and then her. He looted a panoply and grabbed ODD. This would make my life a lot harder.

I engaged the taiga that was in close combat with one of my men with the Dakini HMG. He killed both participants. I’ll mark it down as a necessary loss. The Dakini then ran up, shot the Missile launcher remote to pieces and then tried to engage the Shasvastii known as “Corax”. He dealt a wound and hid in cover. The beta followed suite. He killed Corax and then took some pot shots at another caliban, who he killed. A delta flanked and shotgunned a worm doctor, another remote and a TR bot, killing them all. The Epsilon also engaged Victor Messer with his HMG and killed him.

The center room caliban then went on a rampage – killing the Dakini and the Beta. A mentor engaged our Delta and downed him in one volley.

Our last moments were spent reconciling our defense – we were ahead in body count and intended to keep it that way. All he had left to do was move a Taiga up to fight a Varangian, they killed each other in CC. The ODD caliban engaged the epsilon in a duel that was out of his SMG’s range and lost.

The fight was over and the Shasvastii retreated.

The Caliban ODD engaged the 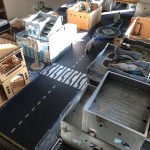 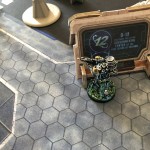 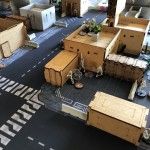 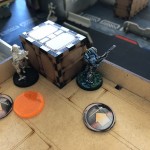 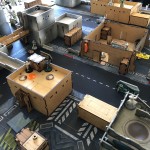