Fought At The Gallery Maze: The Chimneys
1096 days 17 hours 42 minutes ago

There was silence over the normally busy Onyx camp, located deep withing rock maze of the region known by humans as The Chimneys. The only sound audible enough to be heard was coming from the large mess hall, located in the middle of the camp.
The sound was prolonged, modulated and somewhat sad…

Commander Vir’Tak performed last long détaché on his violin and looked around the mess hall with worn look. The inside of the building looked like a battlefield. Chairs, tables, glasses and other various items lying everywhere, his soldiers on or among them. Sometimes under.
– Now that was one wild party – he though to himself, carefully putting his violin on the bar counter (at least, as carefully as he could in his state). He reached for his glass and took a little sip.
It all begun with Rodok chief, Gragaz, who came to him and said they made something and would like him to try it out. Vir’Tak was a little reluctant, since the last time they offered him with their latest culinary delicacy, but didn’t want to loose his face to his subordinates.
It turned out, that those Morats were making booze in their barracks and just came with full 3 barrels of something one could use to clean Xeodrones with. They called it “Warazak” and boy it was strong. Even Vir’Tak hardened body was struggling not to became its casualty. Well, one thing led to another, and now they were here.
The last clear recollection Vir’Tak had, was when Gragaz was pushed by his Rodoks into the dancing contests. Za’Chara was extremely amused at the concept of dancing Morat (Vir’Tak was expecting the worst) but then it came out Gragaz was a triple champion of the “Dance Revolution” event on Tranora III.
– Bro, check those moves. This guy is SICK – Even Za’Chara was impressed.
After that everything went downhill. Even the hardest Morats under his command where knocked out cold. The only ones still standing where Unidrones and Ikadrones from the support squad. Although it wasn’t because they were awake, the “Warazak” was strong enough to eat through their bio-technological shield too. It was because drones remained vertical even
when unconscious. Vir’Tak always found it wierd. He’ll have to ask Doc about that someday.
Focusing his gaze on one of the unidrones on the dance floor, he notice that there was one other person still up. I was Gragaz, although he wasn’t on the floor only because he was hanging from the last unidrone he was dancing with.
Za’Chara, who was half-lying on the counter next to Vir’Tak moved a little. It seems he was regaining his senses. He moved his hand and dropped a couple of bottles from the counter. For Vir’Tak, the sound of bottles connecting with the floor was deafening. He quickly put his hands on his ears in desperate yet futile attemp to block the sound.
– Maaan, my head – Za’Chara grasped his forehead with one hand – What was that, Avatar fluid with sepsitor inside?
– Told you this will kill us… – Vir’Tak put his hands down.
– I though you were exaggerating…

– Commander Vir’Tak, urgent communication from High Command. Code TR-9. – automatic message system announced from his commlog
– Not now, please… – Vir’Tak sighted. He tried to rose on his feet, only to step on something and loose his balance. Even in his intoxicated state his Umbra reflexes allowed him to grab the counter and avoid faceplanting the floor. He looked down to see what he stepped on. It was their Noctifer, still wrapped partially in his thermo-optical cloak. Only his legs and one arm were visible from under it.
– This will not be a good day – he muttered, stepping over the Malignos.

- So, are those the mission objectives? - Kerr-Nau asked, scratching his head
- Thats what I got from Commander - Kraal said while looking at the data pad - Looks wierd though.
- And the High Command really wants those? I mean... Well...
- Yeah I know. But I'm not going to question their orders.
- True. Lets just do it and get back. My head still hurts like hell.
- Agreed, I need some sleep too.

We were playing on the table from other local event, so we couldn't change it. For the sake of the game, we decided that the middle Armory building has infinite height (like in The Armory mission) and that the doors can be freely open by just performing shoirt skill in contact with them. The Nomads won the initiative and decided to go first. They deployed with Morlocks and Morans forward and dropped some camo around. Onyx forces deployed using the "total ARO" tactic essentialy bunkering in their doployment zone, with Q-Drone Unidrone ML and PSR guarding most approach lines. Also, some flash pulses for backup.

Nomads turn 1
Zondnautica moved with her Impetous order around the right flank, getting ARO from Nexus Spec-Ops in Unidron fireteam and Q-Drone. She got hit only once and went unconscious behind building. Morlocks used their Impetous to smoke that passage and throw smoke in front of camouflaged Intruder.He is shot down by Q-Drone, but then Intruder then reveals himself and guns down the Q-Drone. Second order Intreuder tries to shoot down Unidrone ML, but somehow Unidron beats him and blows him off the roof. Auglacil Spec Ops, who is a doctor in his spare time moves his robot helper to the fallen Zondnautica using smoke as cover and heals him back. Morlock runs from behind the building but, since Intruder is no longer on the table, Noctifer AROs him with ML and vapourises him. Zondnautica rides forwards on the right flank and peeks around the corner trying to shoot at Nexus Spec-Ops. Nexus and Unidron return fire and kill poor Zondnautica for good. Camo marker on the right flank moves forward and Morlock attack Immetron in CC in order to get the Predator classified. Immetron fight bravely, but falls.

Onyx turn 1
Med-Tech activates his slave drone and repairs Q-Drone back. Unidron PSR shoots Morlock that destroyed the Immetron and kills him. Ikadron on the left flank goes on the suicide run and triggers both Morans Koalas. Miraculously, he survives. With road clear, Kerr-Nau moves to the left buildings, trying to kill Warcor while also reaching the building on the Nomad half and performs Sabotage. Then he doubles back finally killing the Warcor. Ikadron tries to perform Predator on Morlock but fails. 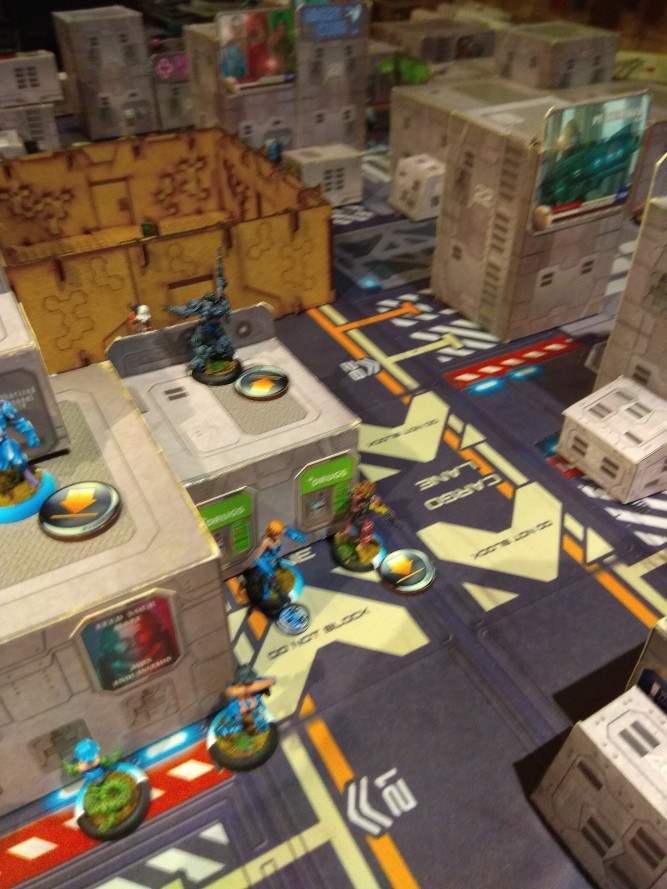 Zondnautica tries to sneak around... 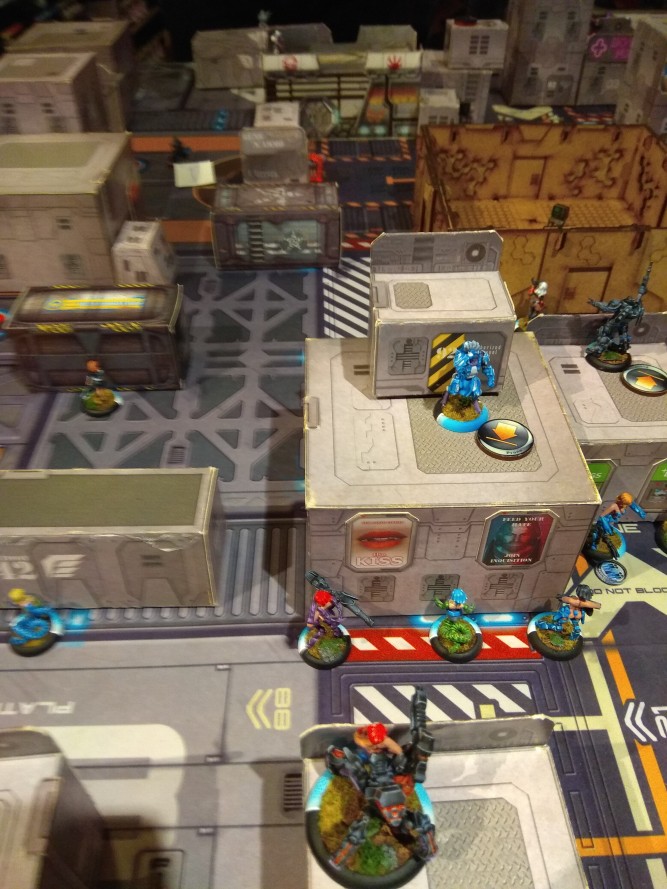 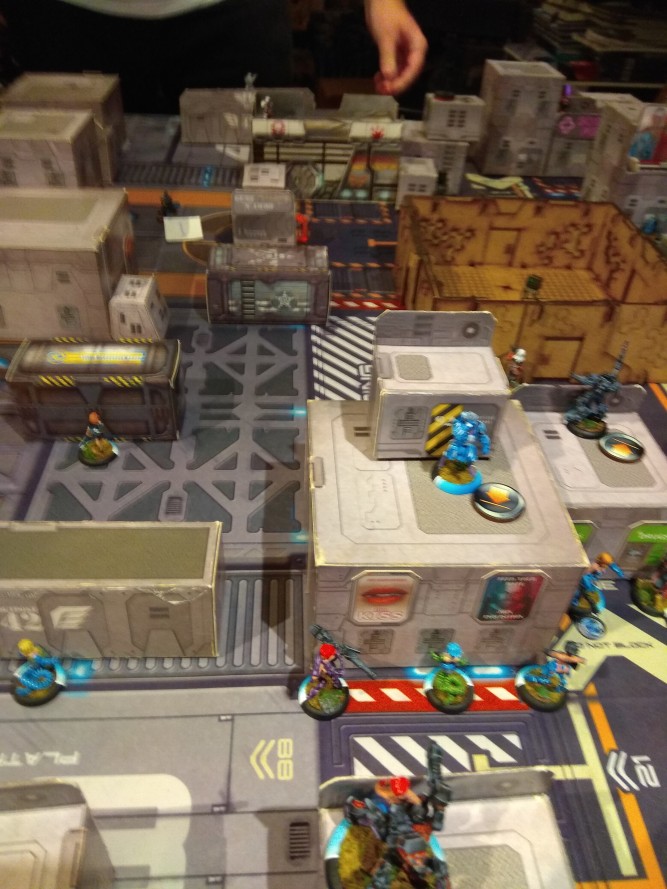 And then Unidron ML shoots Intruder 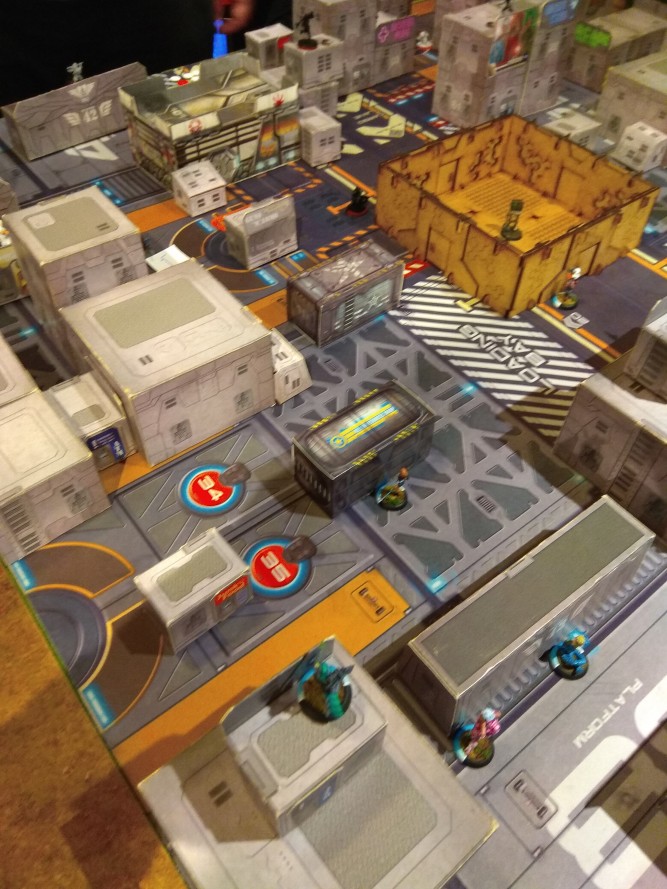 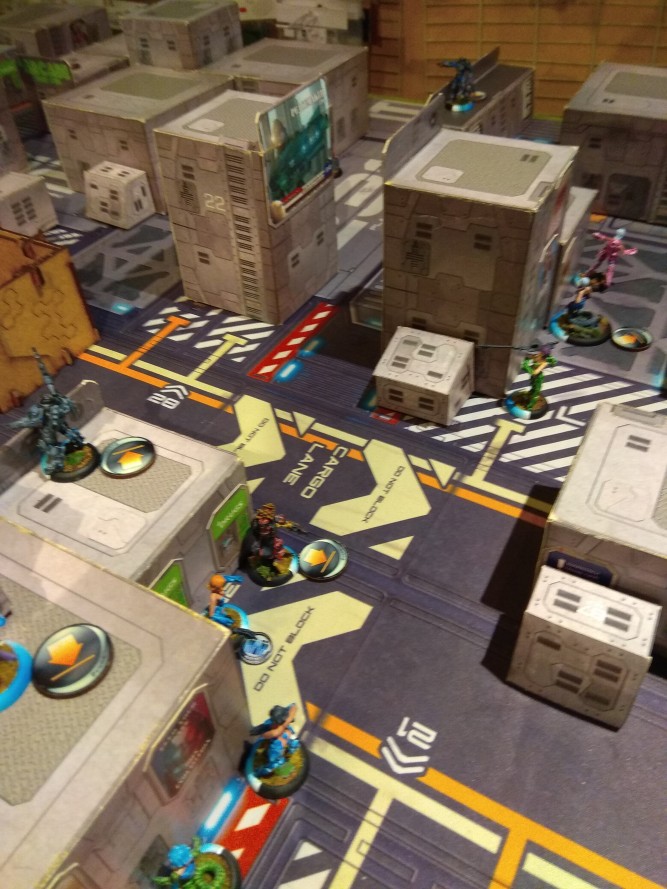 Zondnautica tries for the second time 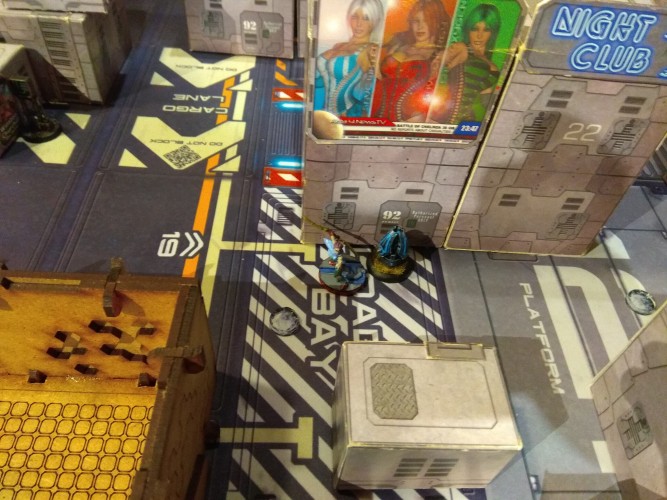 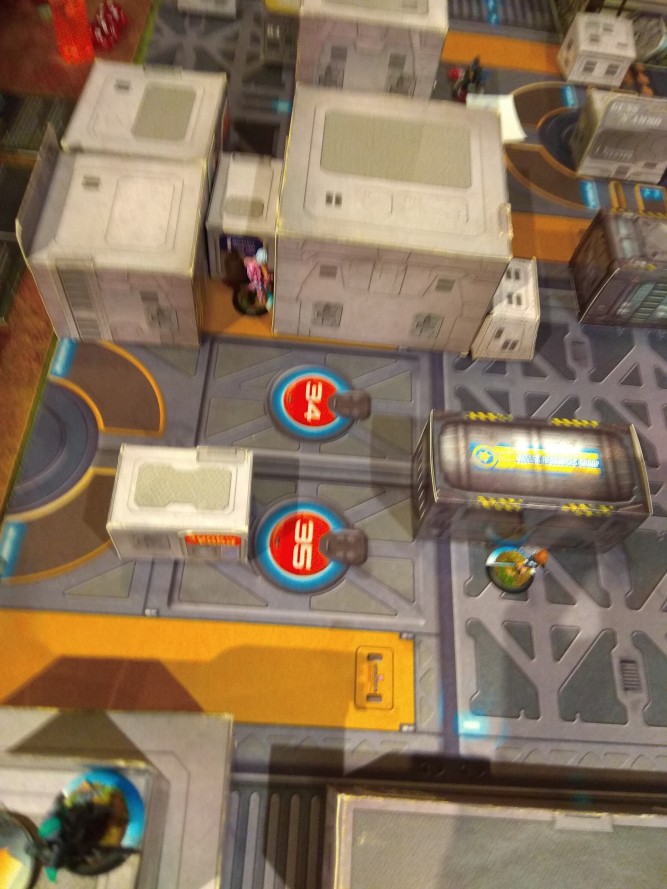 Nomads turn 2
Camo marker on the right moves behind buildings towards center building. As it turned out, it was Zero KHD, aiming for the Nexus hacker, Onyx Lt. The road is mostly clear, with only Kerr-Nau watching the approach. So he must die. Nomads pull their ace from their sleeve: Hellcat HMG lands on the left side just beside Onyx deployment zone. With no ARO, he proceeds to shoot Kerr-Nau in the back. It seems that this is Kerr-Naus day however, because he not only managed to survive 4 HMG shots (with no dodge or change facing), but then turns around and in next Hellcat order beats his rolls with his plasma rifle and puts him unconscious. Luuuucky. With plan A out of the window, Nomads go for plan B. Zeros KHD opens the door to the middle building and goes as far as he can to get into 8 inches of Nexus hacker. Unfortunately, he is still 1 inch short to attack. Moran on the left side decides not to allow for Predator to be completed and fires into the CC between unconscious Morlock and Ikadron. He kills Morlock with one shot. Ikadron uses change facing and survives (illegal manouver as we later found out, you are not allowed to do that in CC...).

Onyx turn 2
Kerr-Nau, having his pants full from his encouter with Hellcat moves to him in order to complete Predator. After 4 orders, when he still haven't managed to put that Hellcat down (damn Nomads armor), he gets help in form of Slave drone. This time with B 2 he manages to kill Hellcat and perform objective. Then he shoots pitcher near the Nomads HVT and allows Nexus to perform Designation. Ikadron moves away from Moran, flaming him and finally goes out to another Koala. On the right flank, second Ikadron together with Rodok kills second Zero. In hte middle, Rodok paramedic moves towards the middle building and manages to kill Zero KHD inside. 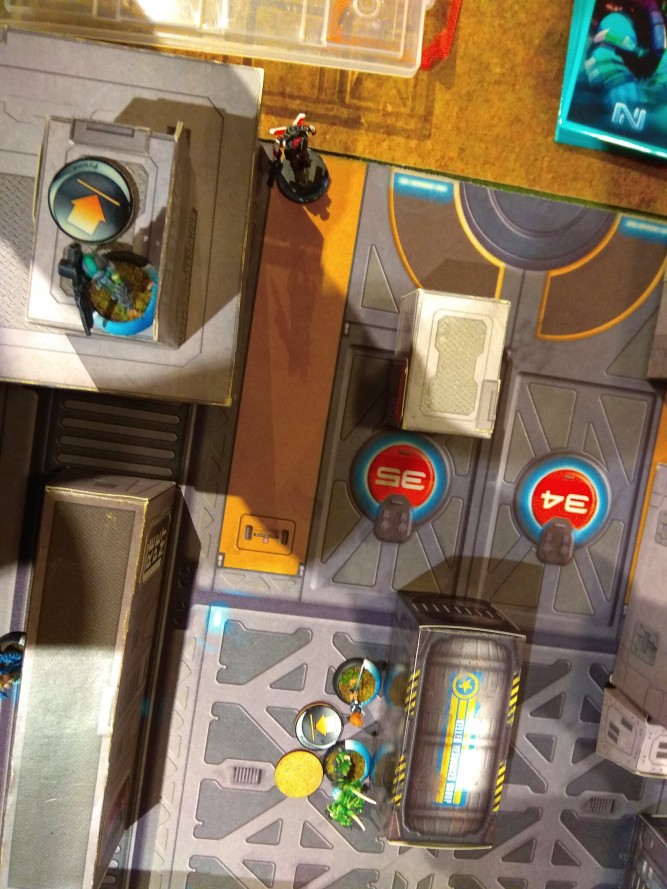 Kerr- Nau wasn't feeling very well... He could still feel the effects of the last nigh party, even after a coctail of drugs and stimulants Doc gave him before the mission. He crouched behind the cargo container, trying to focus when a spray of bullets hit the container wall and he felt two strong hits on his back. Totally suprised he fell to the ground. Turning around he saw a human aiming at him with his gun, ready to shoot another burst.
- Were did that guy came from - flashed through Kerr-Nau head, while he tried to roll out of the way. Unfortunately, in his sorry state he just sorta slumped on his side, with his weapon beneath him. He tried to scramble on his knees when that human fired second burst. Just then, his weapon suddently discharged, hitting the human in the chest and sending him on the ground. Kerr-Nau froze, looking at his gun, then at the enemy. Then he finally rose on his feet, and looked at their Shasvastii contact, who was crouching nearby, with the look of utter suprise on his face.
- Don't worry, I'm a professional Nexus Agent - said Kerr-Nau, trying to sound as nonchalantly as possible.
- Kerr-Nau, we noticed gunshots from your location. Whats your status? - He heard Kraal on his commlink.
- Well, everything looks fine... Somehow. But I think I used up all my luck for this year... 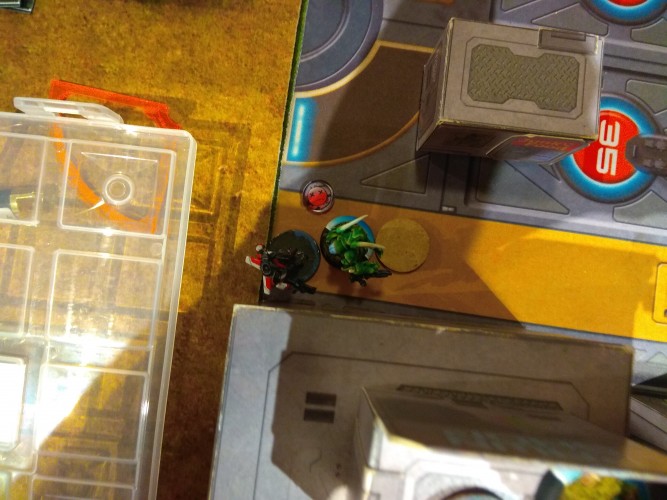 Kerr-Nau... What are you trying to do? 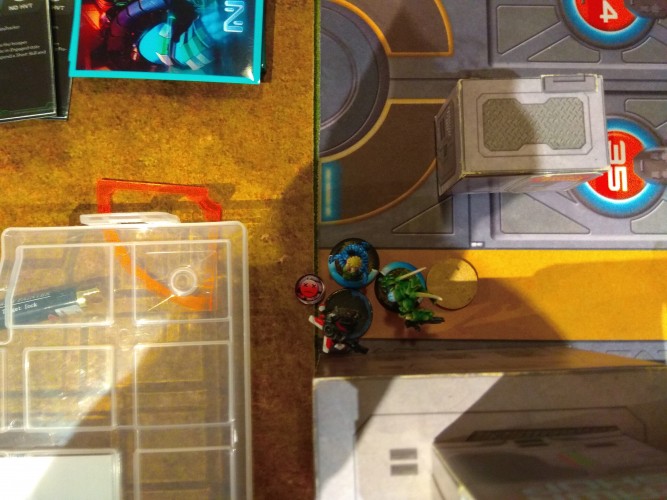 - Agent Kerr-Nau, maybe you need assist?
Kerr-Nau rose his head. Med-Tech slave drone was standing besides him, looking at him with interest with her head leaning on the side. He was struggling with that wounded human for sometime now and now they were both on the ground. Kerr-Nau managed to pin him to the ground, but his pistol was incredibly ineffective, even on this distance.
- Well, if you would be so kind...- Kerr-Nau said, gasping. He will never drink that Morat shit again... 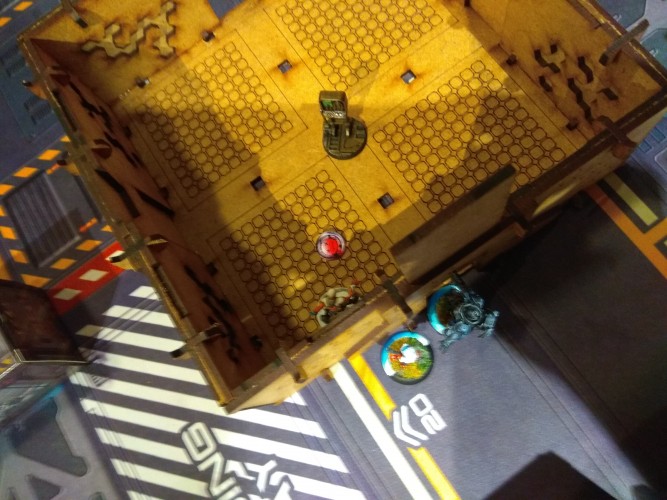 Nomads turn 3
Auglacil Spec-Ops moves towards the middle building, dodging many AROs, only to be finally stopped by Rodok. With nothing more to do, Nomads end. 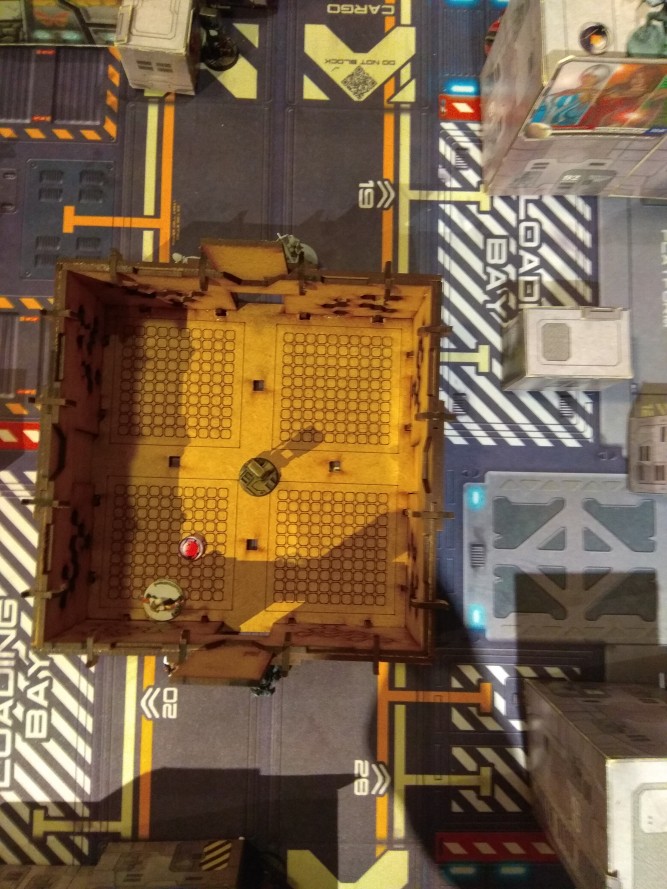