When the alien threat appeared at the human edge, O12 responded quickly, assembling a crack team of troops for their operations: the best operatives hand picked from among their elite force.

Kiwi did not make this team, he sat at his desk wondering again how he got this posting. His recent actions at Dawn during the Kurage crisis had resulted in the Nomads falsifying his combat record and shipping him off to the O12. The space faring nation told him he wasn't Nomad material, his combat record was poor and he was alarmingly punctual to the more anarchistic Nomads.

And this was how Kiwi came to be running a routine stock audit of the Xaraks Battery Ammunition and Supply Module that day.

"Matt, something isn't right here. I've got a bad feeling about this." Kiwi radioed his Ariadna mate.

"I read you loud and clear, it just seems to quite. Something is about to go down, I feel it." Matt replied.

"What are you talking about? Of course it's quiet, it's a stock audit, not a war zone. I was referring the this stock transfer report. You Ariadna clowns have used form SV2212 instead of form SV2212a to record this deal."

"What does it matter, they're basically the same form. Let's move on." the Ariadna officer began to move on to the next crate.

"What does it matter?!? They're basically the same?!?“ Kiwi struggled to contain his rage. "can't you see this form doesn't have the requisite 1 inch margins required by O12 standards!" Kiwi flicked his radio channel, "Gamma 519, this is Kappa 010. I need support in the ammunition supply module, we have a situation down here." 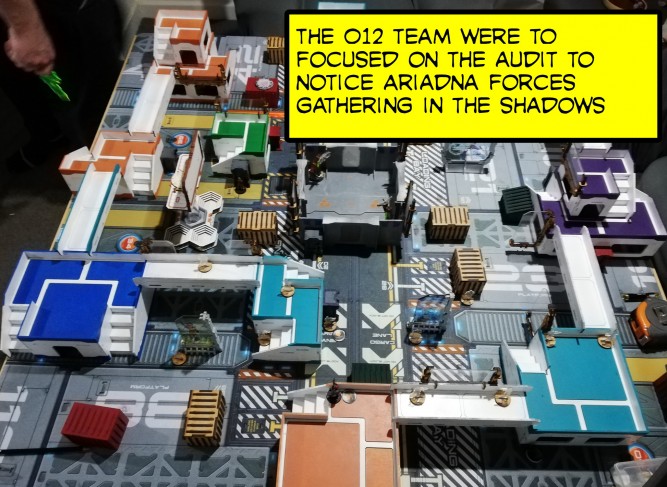 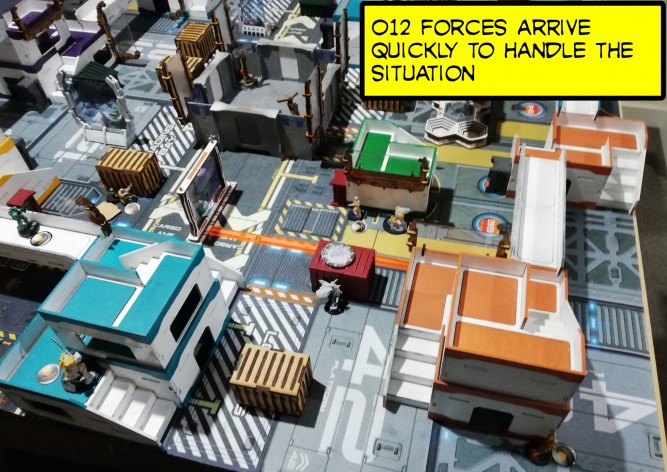 Clash at the armory

Under the cover of smoke, an Irmandinho rapidly advanced towards the armory and forced a door, desperate to remove any more incriminating records before any over zealous O12 paper pushers could find them.

Not being one to stand for lazy record keeping, Hippolyta wasted no time. She leaped clean over a crate and charged into the armoury. "Where are your going with those?"

The Irmandinho turned to run, but the Myrmidon stopped him. "Put those forms down!"

Hippolyta drew her blade and slashed at the Kazak, but the thick stack of forms shielded him from the blade. As confetti flung across the room, she swung the blade again, cutting the Irmandinho in half. 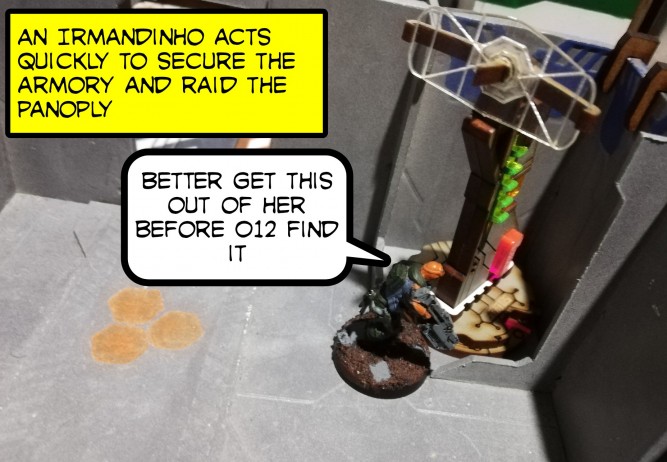 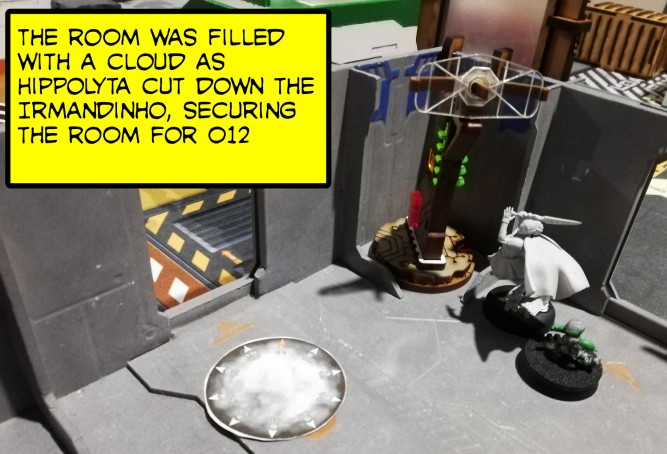 Seeing the fate of his Irmandinho team mate, the Veteran Kazak stepped up to secure the paper work, moving around the armory to line up the biggest O12 soldier in the hope of putting the team into disarray. His HMG sprat out a burst of fire, but his shots went astray and the Gamma's feuerbach, which was normally used as a paper weight blew the seasoned Ariadna soldier into a dozen pieces, which coated several attacks of nearby forms.

"Fantastic! " exclaimed Kiwi, from a safe distance, "I'll take this with me back to the office and redo them in blue ink, rather than black." 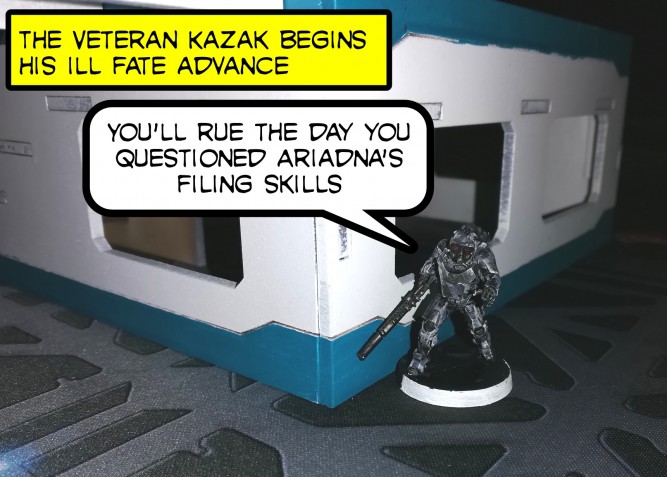 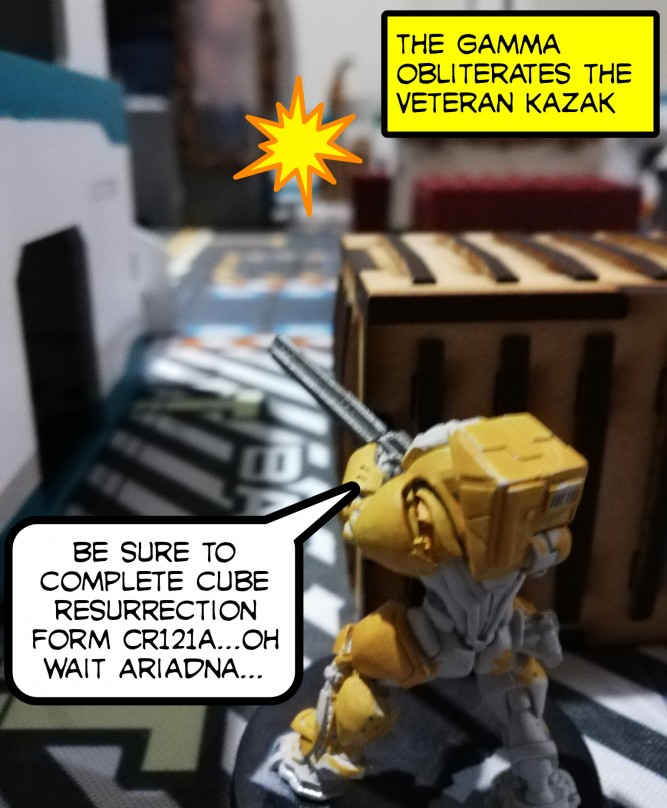 Bringing light to the shadows

"I'm pinned down here," came the cry of the Gangbuster as he advanced on the armory. "5 of them on the left flank."

"I've got three more on the right!" responded the Kappa.

"That doesn't make sense." Said Kiwi, riffling through the Ariadna requisition forms completed prior their assignment. "The Kazaks only had 10 men on this level, and we've already cleared 2. Omega 67, can you get a clear look from your position?"

On a walkway overlooking the armory, Omega 67 stood up, facing off towards a Streloks and a number of shadows. On the far side of the field, two Spetsnaz responded, clipping him with a sniper fire as his HMG's bullets hit the wall dangerously close to one of the Spetnaz.

Omega 67 dived back into cover, "I spotted several decoys on the bridge at the back, I confirm 2 Spetsnaz. Epsilon 301, can you pick them off."

From a tall building on the left flank, Epsilon 301 stepped out. "I see one." He fired a pair of shots from his sniper rifle. "Target 1 eliminated. Target 2 has taken cover behind a railing. I'll over the field." 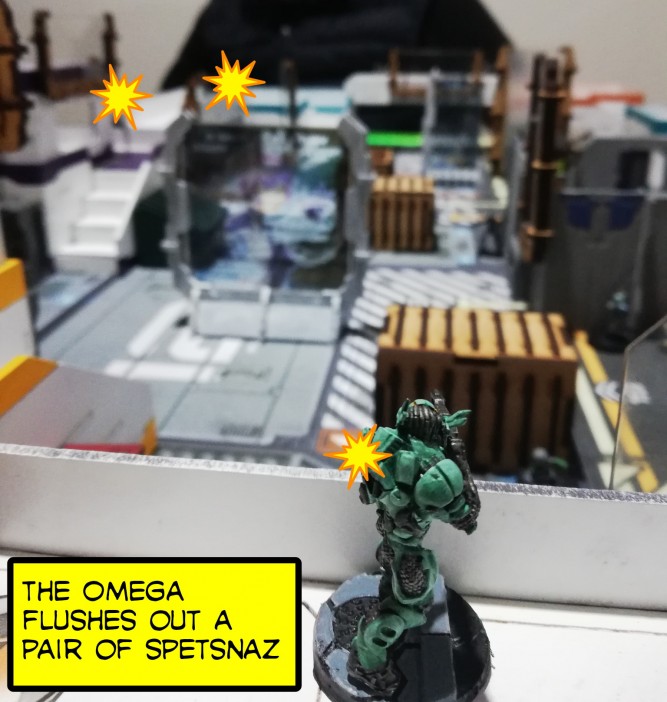 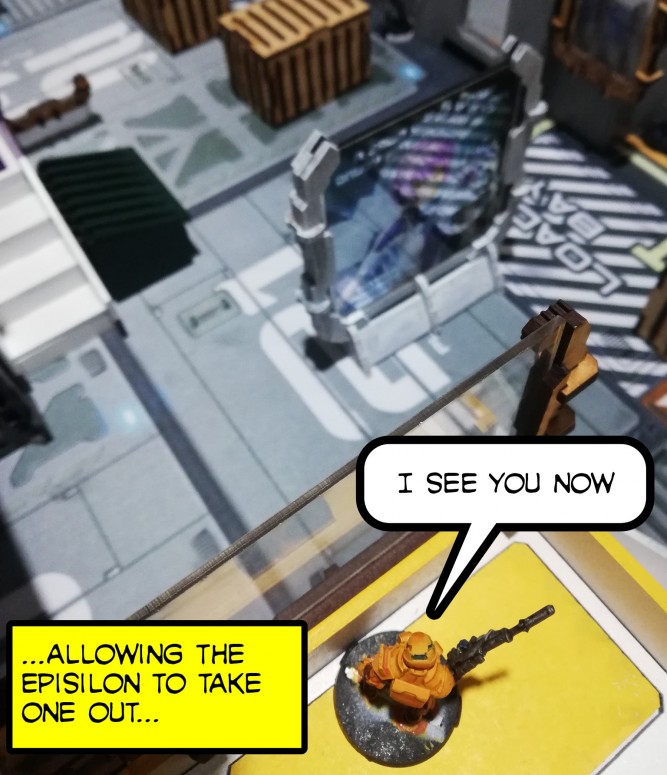 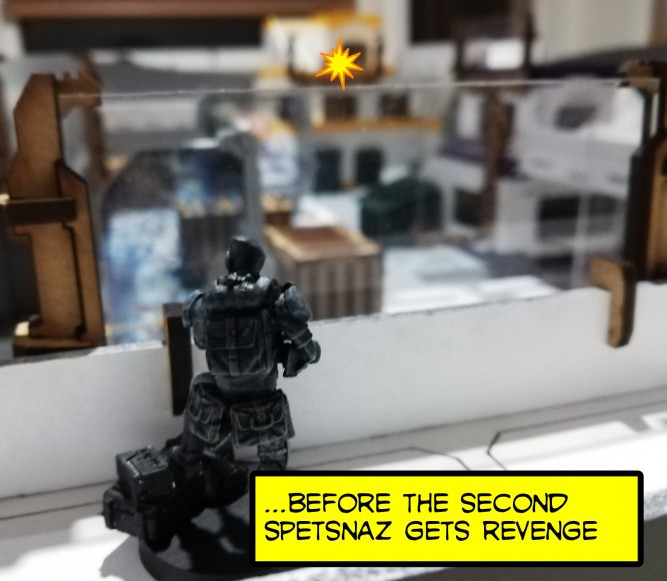 "Kazak forces are making one last push. Epsilon 301, can you shut them down." HMG shots rang out across the facility. "Epsilon 301 do you copy?"

Silence. Epsilon 301 was down.

With the sniper eliminated, the Kazaks made a final push to recover the incorrect paperwork. The armory filled with smoke and 4 Kazaks advanced. A scout moved in and planted a mine, before retreating into the shadows. A second scout moved in to join them in the armory. Vassily Plushenko moved into position to provide covering fire from outside, and a final shadow entered the room. The Ariadnans began to rifle through a stack of papers, looking for the form SV2212.

"Get away from those papers!" Hippolyta could not contain her rage - she had spent the whole day stacking those piles, and didn't want to have to do it again. She charged forward, triggering the nearly mine and sending paperwork scattering around the armory. With her last gasp, she managed to discharge her nanopulsar, liquidating the two scouts.

Behind her, the Sirius and Gangbuster peered into the room. "Omega 67, can you clear this place out?"

The Omega stood again, and fired on the last Ariadnans blocking the room, taking them both out. "Area secure."

"What a mess." Remarked Sirius 02 as she entered the room. We'd better lodge cube resurrection form CR121A to get Hippolyta back into action. She's got some cleaning up."

"Don't you mean form CR121A-1, she's got a cube 2.0." replied the Gangbuster, outraged by the Sirius's carelessness.

"In triplicate of course?" The Gangbuster surveyed the room once more. "It's quite a mess but the armory is secure. That will teach those Ariadnan's for using the wrong forms."

"What a relief, I can't wait to return to the office and begin writing this incident report up." 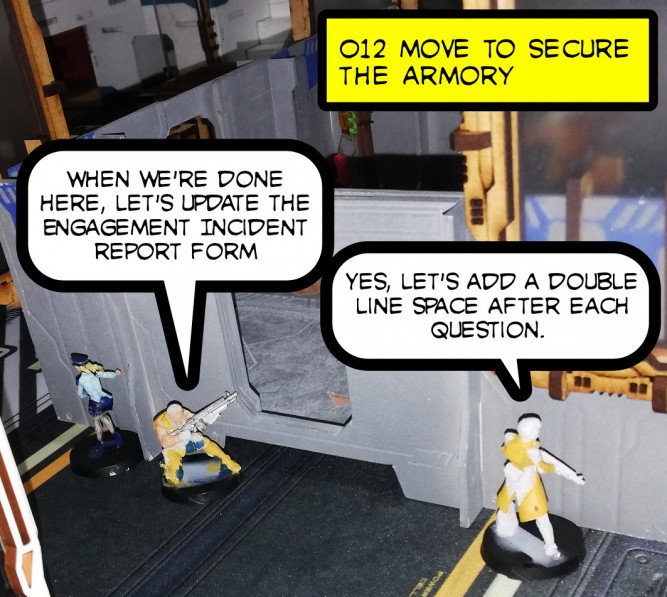 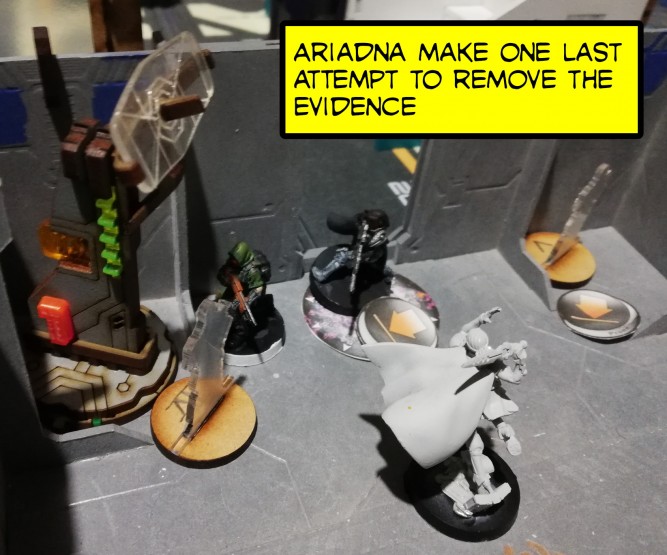 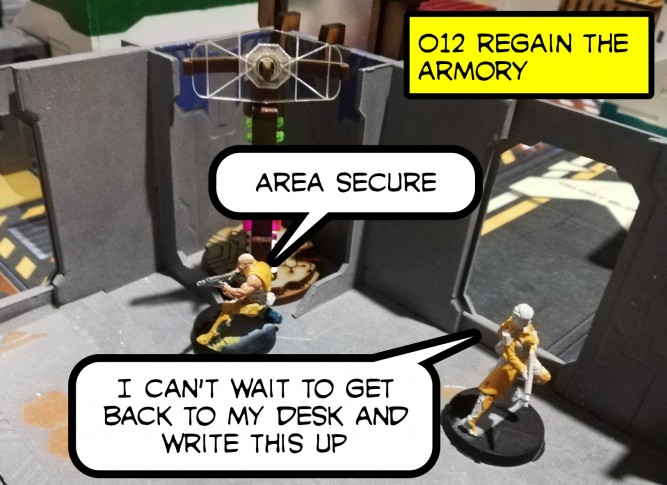