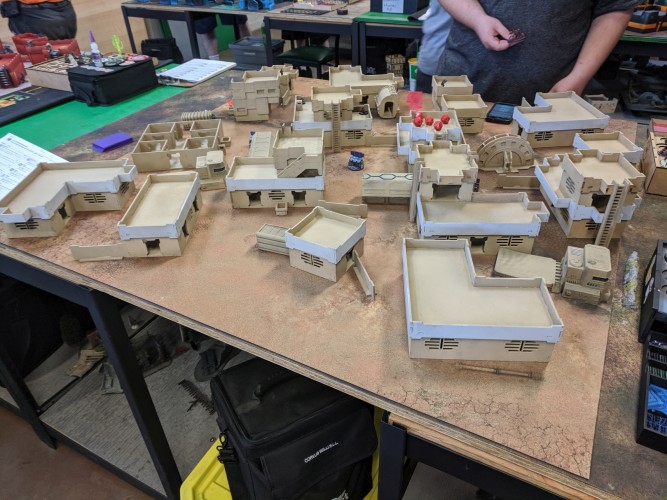 The second game of the tournament was Countermeasures against Dylan! ... Yeah, I played both of the Peters twins in back-to-back rounds.

I brought the same list as last time, but now-- now-- the board was way more open. I'd get to leverage some Varuna strengths this time around instead of being constrained by my playstyle. If I could have brought more shotguns, I would have!

Dylan wins Initiative this time around and goes first, so I counter deploy as usual.

Our first 3 cards are Capture, HVT: Retroengineering and Follow-Up. Dylan chucks Capture and we pull HVT: Identity Check-- which is great for me! I really like the Fusilier Hacker as the Datatracker in this list because she's either getting things done from a distance thanks to the 2 repeaters, getting things done herself, or just buffing a REM. It works! Not for these cards, but... she works!

And again, sorry for the low amount of pictures. Hard to take photos when your games are down to the wire-- this one was! 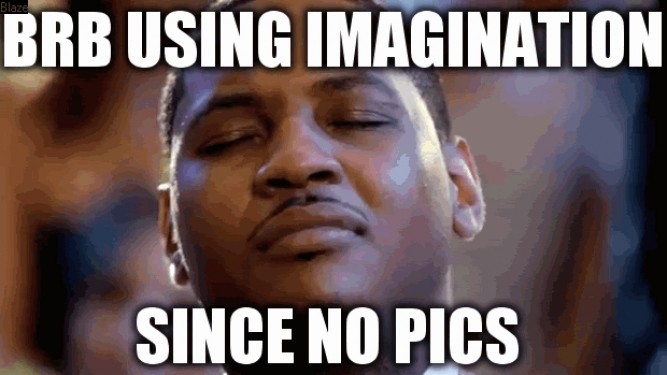 Dylan rushes a Jaguar forward at some Helots and throws smoke, but fails. He runs out more, throws smoke, eats two LRL shots and dies. Well... that went well. There's a Camo token back there that has an HMG ready for me-- I bet the Intruder's going to deploy next to the unattended palbot and it does, so no smoke means he's not going to get the chance to pick off my ARO pieces.

So Dylan drops a Hellcat Spitfire into my DZ, ready to step up and shoot the Sierra if he gets the chance. It's also right where he can get a threat vector to my Datatracker Fusilier Hacker, and right beside... the ZC Sensor/Jammer, lol. He fails the drop even with Zoe spending her irregular to give him +3 and scatters 1" off the table, so he goes home. Arguably the best result. 1" closer would've put him in front of a TR Bot and a Bulleteer and god knows with my luck he would've survived, killed both of them and then my lieutenant.

The Intruder shows up now, smokeless, and takes vengeance for his Jaguar friend. He doesn't challenge the TR Bot now, though, choosing to move on my Datatracker too. He moves across the middle line and scores Follow-Up and then moves inside one of the buildings, threatening some great angles. Unfortunately when he Follows-Up I reveal a ZC Sensor/Jammer who hits him but fails to Isolate thanks to his stellar BTS. That's happening a lot lately...

An irregular camo marker moves up to the interior of the building to watch the Intruder's back. It's a Liberto! It's not revealed but c'mon it's kinda obvious.

Lastly, that Hellcat Spitfire comes in and shoots at my Fugazi-- who miraculously makes ARM, then makes ARM twice, surviving his full fusillade of shots. Ummm... what? He ends his turn with the Fugazi still alive... 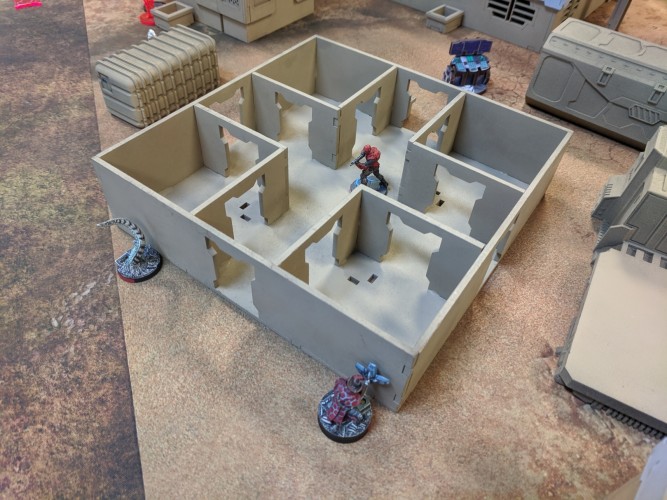 On my turn we replace Follow-Up with Test Run, and... I chuck HVT: Designation for Data Scan. I can do all 3 of these!!

First things first: Test Run. I run my Bulleteer at the Intruder and... somehow live. My goal is actually to go unconscious here, but killing the Intruder would be nice too, but... I shoot him 3 times before he takes 2 wounds in 1 order and goes down. I spend an order to have the ZC Sensor the Camo Token to reveal the Liberto. Stepping back, the Bulleteer gets a good angle on it and the Liberto DEP's him! It misses due to ODD and Cover, and the Bulleteer puts it Dogged, then spends another Order to put it Dead, hoping it'd chain colt him. It didn't.

My Kamau Sniper idles and drops both Transductor Zonds in one order, outright killing one. I spend another order to deny Test Run for the future, killing the surviving Zond. Remember that one Hellcat Spitfire? He needed to die. The Kamau Sniper caught him out with clever movement and shot him dead, opening up a path for Data Scan!

With a few orders left my ZC Sensor/Jammer runs a bit closer, and the Fusilier Datatracker chases.

The last part of my turn is running a ZC KHD into a Moran's repeater range. He gets Brain Blasted, but crits his Data Scan, scoring me 1 card to Dylan's 1!

Thankfully on Dylan's turn he doesn't drop Identity Check. He draws Nanoespionage and says he's good with these 3 and then runs with it. 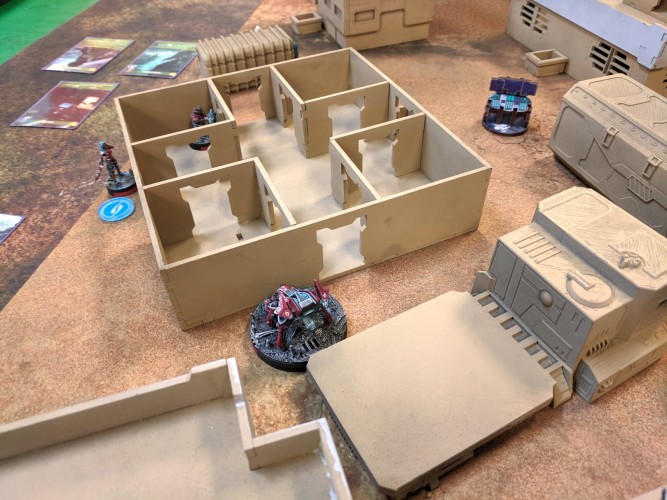 Dylan leans out his Moran and shoots the Fugazi, dealing a wound. It goes Unconscious 1. He runs up with his Daktari and rushes over to the ZC KHD's body, scoring Nanoespionage effortlessly before shooting the Fugazi again. It makes ARM 3 times. He leans out with a Tsyklon and shoots it heavily but... it makes ARM again and ends up going only Unconscious L2!

This turn seems really short in retrospect, but like, yup! That sounds like Infinity. I refill, discard for something terrible and here we go!

My 2nd turn I run my Machinist over to the spot where the Fugazi is, but the way needs to be cleared! My Trauma Doc leaps and runs to the Daktari, challenging her to a gunfight-- and crits her dead. FIRST DO NO HARM!

The Machinist brings up the Fugazi, scoring me Test Run, and then I have my ZC Sensor/Jammer step over and score HVT: Identity Check.

My Trauma Doc decides it would be best to clear out the ZC KHD's body and shoots him with a medikit to deny the enemy Extreme Prejudice if it comes up. He fails PH and dies!

The Tsyklon leans out to see the area and shoots a Pitcher down the lane, to the Machinist, and Zoe rolls out WIP roll after WIP roll until she scores Telemetry. Of course she's his Datatracker, so that's a ton of points for Dylan.

Zoe then rushes the ZC Sensor/Jammer who jams her, but fails, and gets knocked unconscious. She runs up and steps on his neck. Woof. Now we're tied on Cards but he has more OP due to the fact that his Datatracker scored more...

Unfortunately for Zoe, though, walking up to the ZC put her in hacking range. I declare Brain Blast (and he goes for Extreme Prejudice anyways) and Zoe goes down! 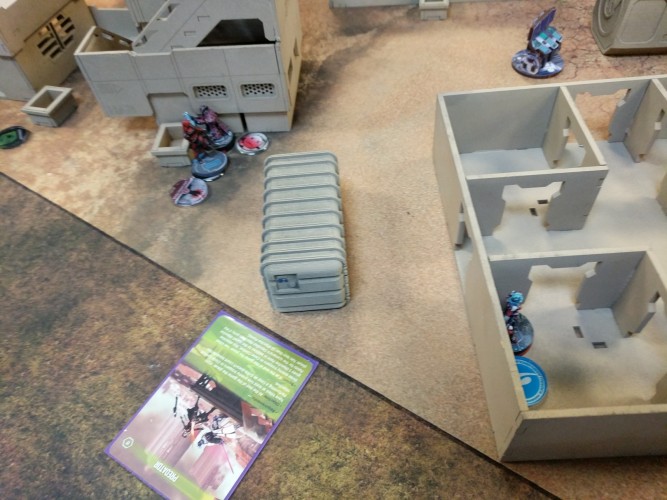 On my turn I draw Net Undermine and Mapping.

Mapping-- easy! I step out of the room with the Fusilier Hacker, run up to the other side of Zoe and declare WIP. Bam! Now we're tied.

Heading back to Zoe, I stab her with a knife and score 1 of 2 kills for Predator. But who else... and right there is a disconnected Palbot...

The Fusi charges, misses, hits, and the Palbot makes ARM, and misses, and... well... we're tied unless I get a miracle going.

The Trauma Doc rushes across the map, tries to get into position, with only 2 orders remaining is about 4 inches away... and gets KrazyKoala'd and dies.

Countermeasures ties are weird, too. We tied 8 OP to 8 OP. What?? 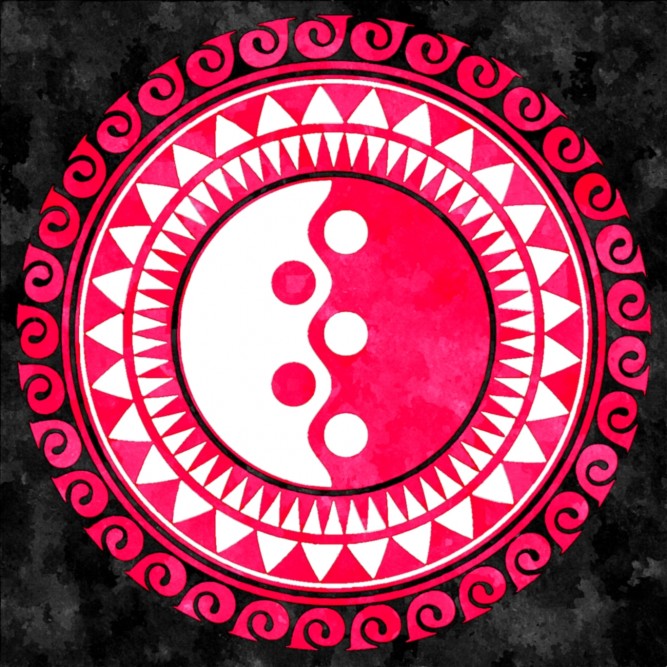