After the past clash with bandits using the Haqqislam force’s sign, gunso Kazuto said, “They will be back, they see Kami.”
And so it happened. This time around the Xaraks Battery.

First turn.
The initiative was on our side. The enemy did not expect to see a warrior like Daiyokai Dengekitai in our positions. Moving forward, along with a bushi warrior, Domaru Norikage, our forces launched a powerful counter-strike. Poured by fire from Red Fury, they fell in sequence.
The first attack took three out of seven enemies with us, while our experts moved to strategic points. Having lost their advantages, their response to our actions was negligible.

Continuing to move forward, thanks to the brute force of Daiyokai Dengekitai, our specialists took their positions and grabbed the antennas while the Liaison Officer held the tech-coffin in the center.

The victory was already won, the single shots of the retreating enemy were just spits, to which our forces did not pay attention, carrying out their tasks. 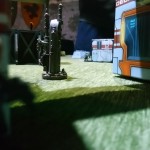 No one has recommended Jyugo009 for commendation. Log in to be the first.