Our forces in the Fireteam of four Keisotsu and Kempei Kazuto moved forward.
Meanwhile, an ryuken-9 unit armed with a Heavy rocket launcher arose out of nowhere on a hill. Launching rockets one by one, he created hell in the rear of the enemy, destroying the enemy Remote, serving his engineer and their heavy infantryman Janissaries.
The leaning Daiyokai Dengekitai was met by the fire of the enemy Remote with the Total Reaction program. Having been seriously wounded, he was forced to retreat, being in the same unit with two soldiers of Domaru.
On the other side, Fireteam entered the shootout, depriving the enemy of several Muttawiah.

The shootout continued. The enemy was losing his fighters, but our forces also could not do without losses. The enemy disabled Keisotsu with Missile Launcher and HMG. The Paramedic in the squad was able to cure only one. The shootout in which we pressed the enemy continued. The wounded Kempei Kazuto was successfully put on its feet by Paramedic Miho.

The enemy was defeated, our specialists successfully completed their tasks without encountering resistance. Another crushing victory over the bandits. 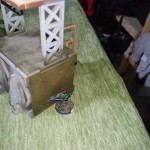