Holding Position at any cost

Attacker: JoBucher USARF
Defender: Melchior: Haqqislam
Battlestartup: “Everybody listen to my command. We have to capture the armoury no metter what it will cost.” 2end Ltd. Cassy while approaching the Armory.
The limited resources in the Headquater could only afford a Harris Team of Marouders and 2end Ltd. Cassy’s group of Grunts. The plan was simple: Get in to the armoury and secure it.

First step by the grunts is approaching to the Blast door and blow it of with D-Charges.
Afterwards everyone gets in to possiton and start to loot the Panoplies… “Look what gut we here!” Rick one of the Grunts finds an HMG and equips it.
1.Turn Haqqislam: In the Meantime, the group of Guhlam with scarface as there support get nervous by the sound of the Blast.
Scarface start immediately his Attack on one of the Marauders and shoots one of them. But the Soldier bleeding doesn’t go down (Dogged). A Ghulam with Panzerfaust cracks the Blastdoor on the other side open, so that the Attack on the Armory can begin.

2nd Ltd. Cassy looked up from the Panoplie to see the Tack holding his two Mk2 in her direction, but her reaction is to slow…
Scarface shoots the Grunt Ltd. Down and approaches further. But his approach to the Marauder with the Molotok doesn’t go well for him… Afterwards he tries to attack Rick how shows him that a HMG in his hand is a real thread for a TEG.
“You will pay for this!”
2nd Round USARF:
With no Ltd. All Command Tockens are used to get rid of the strong damaged Scarface.
And to take anther Peace out of the Panoplies. The Molotok gets into suppressive Fire and tries to cover his comrades in the Armory
2nd Round Haqqislam: With the TAG down Leila Sharif and her Team of Ghulam approach the Armory form the not defended left Side.

She shoots another Marauder down and attacks Rick (The HMG Grunt) from behind. Thanks to Six sense level 2 he can react, but the HMG is too heathy to get it in to position…
After that Leila Sharif has no time left She gets back into cover.
3rd Round USRAF The last Marauder comes to help his two living Grunt Fellows out of the miserable situation. He kills the Ghulam with the Panzerfaust and covers the back entrance of the Armory.

3rd Haqqislam: Leila Sharif gets Killed by the angry Marauders how now protects the back of the Armory. After that the Drones and the Engineer have to approach the armoury. But Rosie and her Fellow Grunt with a heathy flamethrower succeed to kill all approaching attackers.
“Command we have heathy casualties but we could secure the area. Please send us some reinforcements” Rosie after the last fire has died down. 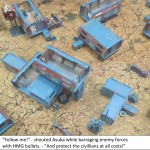 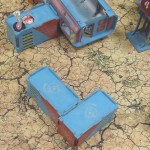