First game of this years campaign, so we decided to play decapitation but without the extra rules of shadow shooters and so on due to this sides crash yesterday. If you want a more cinematic battle report with nice comic strips, check out Melchiors report as well.

I brought a very order heavy list with some midfield presence which relied on the Mowang, the Tiger soldier and the rui shi to do the heavy lifting. Melchiors 10 order Ramah Task Force with Maggie, Tarik and some Kawa´s was outnumbered for good.

My Daoying won the lieutenant roll and chose first turn, so Melchior made me deploy first. 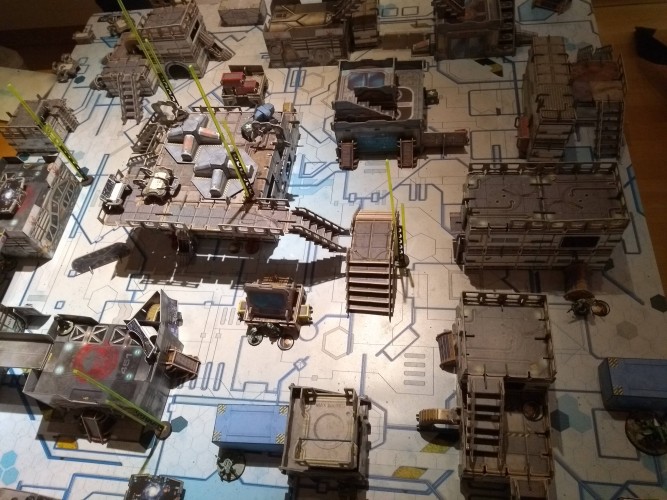 YU JING deployment: Mowang and Monstrucker in the middle, Liberto and guilang in laying mines around the designated target; shaolin and rui shi on the right flank, krakot on the left, kuang shi order pool laying back and daoying lieutenant hiding in a building next to the rui shi

The Mowang stood up and had some bullet exchange with a Kawarij of the Haris team crouching on the stairs, I realized he also brought a Panzerfaust for the occasion of a long range gunfight. I missed 4 shots and he hit with both of his missiles, but somehow the superior Yu Jing armour let me pass 5 of the 6 saves. Way too much drama for the start. Next order he put him down, after emptying his Panzerfaust he couldn´t do much more than dodge and failed.
A Tiger soldier ran in on the left battleedge, exchanging shots with the ghulam sniper just beyond 16 inch, so I had good odds for winning this fight, and so I did. I realized that I could not move further without coming in line of sight to the maghariba guard, so I rushed the shaolin forward, turned to irregular orders in regulars and with the last one threw a smoke grenade on -3 rangeband onto the desert tank, this was rather a desperate move with a 50/50 chance of suceeding and a rather crucial moment for the game.

With the tank blocked, the Tiger could use some 8 orders to decapitate the haqqislamites, starting with the rest of the kawarij Haris, a ghulam doctor, a monstrucker and finally the ghulam lieutenant. I spent the last order attacking Tarik in the back, but he made his 2 armour saves and the tiger soldier went down, thanks to Luna and Maggie. 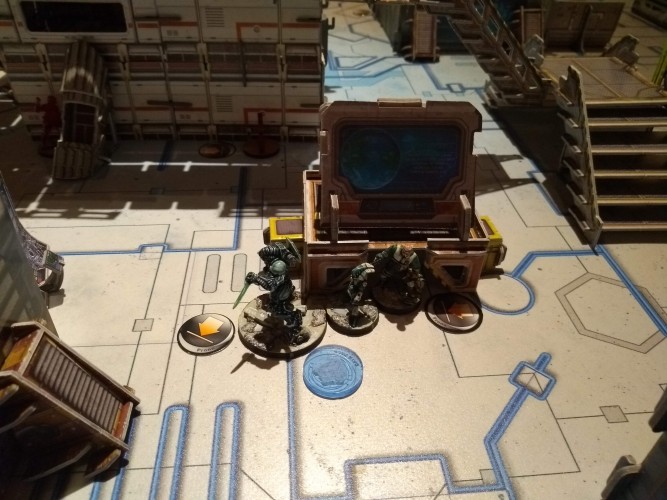 Mowang NCO taking position, ready to raise up and put an end to the existance of the haqqislamite scum

Melchior named Tarik his new lieutenant, rushing him forward, killing a warcor on the way, then he had a go at the designated target, not caring about the mines, he was able to draw a line of sight without triggering the mine, not that he cared, and killed the poor lady. Last order he put both the tag and tarik in suppressive.

I put the Mowang in group 2, so I had bout´ ten orders for him. Guilang on the roof right before tarik put down a mine, proned to the edge and opened fire on him, he made the armour save and killed poor guilang. I had to get rid of Tarik to get to his desginated target so Mowang advanced, putting a wound on the super soldier, now it was time for an angry space monkey to chain rifle this dude. And so he did, Tarik chose to tank the chain rifles but failed an dropped unconscious, the Krakot died in that process. My Mowang data tracker could now advance on the target an kill it. Now he emptied magazine after magazine of his red fury in the maghariba guard and about 6 orders later he was in NWI and maggie was blown up. I ended this turn with him standing close to his last modell, leila.

Leila was his new lieutenant so he had 2 orders for her, moving out and punishing poor mowang with her breaker pistol. There was nothing more he could accomplish with her so we were calling it good for the day.

Posing in the hangar, waiting for battle - not before taking a nice group picture for the records