A shame for the emperors throne 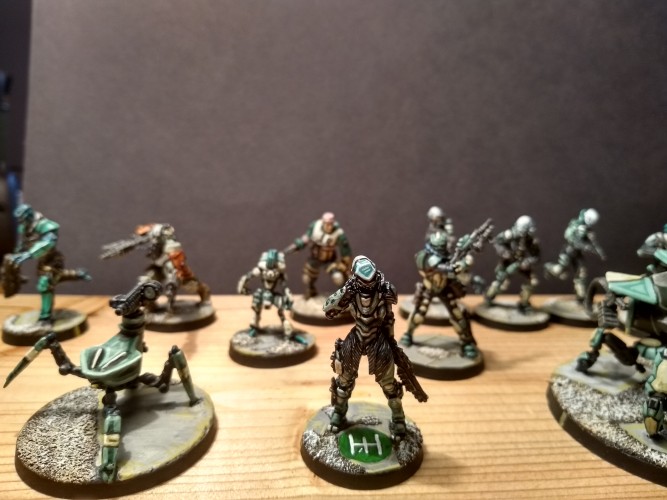 Before the battle, everything was ok

I don't have many good pictures of this game, but I hope my explaining words make it easier to follow the actions. I'm planning to put more effort in visualisation for the next time, so keep excited!

We really wanted to play countermeasures for the first time, so decided to try it instead of frostbyte. I brought a list very similiar to the one of my first bat rep, but with more specialists to do the classifieds.
My opponent fieldet about 20 order USARF with a Marauder Haris, a Grunt Minuteman Core and the obligatory foxtrots, as well as some extra grunts and two 112´s one of them on a bike. I won lieutenant roll and thought it might be a good plan to go second. Well. It was not.

I had a TR Drone on guard, as well as the liberto and Krakot in the middle, next to one of my HVT´s. The rest was relatively safe. Jo´s Core team was spread out in the middle with the Minuteman APHMG proning on the bridge. Marauders were also very close to them, so he was planning to breach my frontline in the centre.

I do not remember the exact classifieds in the open, but the only one JoButcher was trying to achieve this turn, was getting a marauder in my half of the table and passing a WIP check. So he pushed forward with the AP HMG Minuteman and opened fire at my TR bot. Well first order we critted both and second order he critted me three times. The Haris of Marauder approached the container were my liberto and krakot were laying low behind. He spent several order of flaming and rifling them, but in the end he managed to put the liberto to unconscious and the krako had dodged in the open, so a grunt sniper was able to draw line of sight and shocked him of the table. His turn ended with shortening me several orders and having achieved one classified. 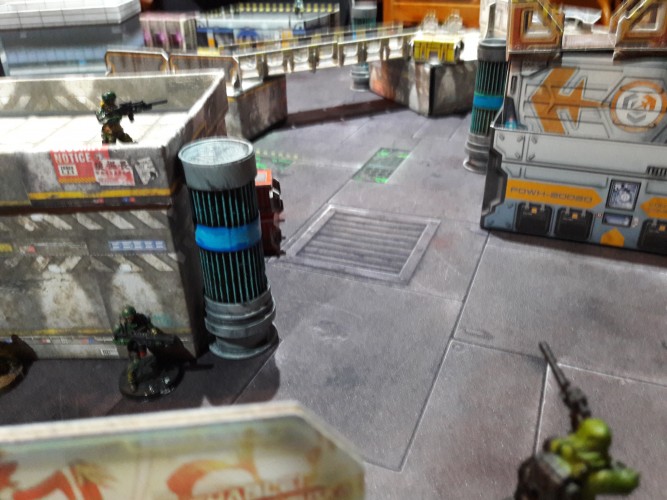 Grunt Sniper taking aim on poor krakot, not so clever to dodge out in the open, but I wanted to get out of the flamethrower range

I put assisted fire on the Tiger soldier, but his time he failed and I had to walk him in from the left side. Actually not the worst spot, I had to get rid of that nasty marauder and fired upon him, we both were in good range bands, had cover and he was ignoring my mimetism, so 4 dice on 13 against 2 on 12. I got burned. Well things were not exactry going well. I dropped smoke to cover the advance of the rui shi, but actually there was a thin line were the rifle marauder could shoot through. I decided to shoot nonetheless and got critted to unconscious state again. Sigh. Now I was really short on good attack pieces and orders in the right groop. Mowang Data Tracker spent the last ressources to attack the damned rifle marauder, he killed him and got wounded pretty serious by the suppressing mine and foxtrot. But he survived and went civevac state with my unconscious liberto to do "rescue", he was my data tracker so that were 2 extra points. I had some spare orders in the Tiger/ rui shi groop so I suicide attacked the foxtrot with one kuang shi and chain rifled him down in exchange for the life of that poor political prisoner. 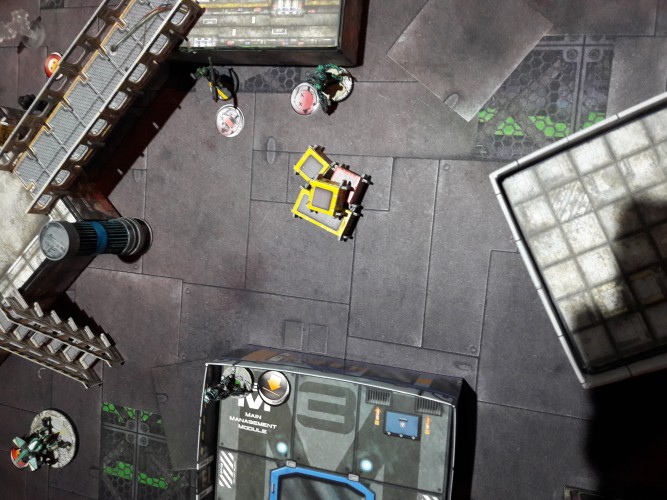 Daoying Lieutenant watching the bloody mess his troops got into

In his second turn he had three classifieds he could do relatively easy, mapping a building in my deployment zone, going civevac with one of my HVT´s and scanning a HVT. He did all three of them with his main grunt team and the HRL Marauder, just after assault pistoling my Mowang. Now he was way ahead of me.

I drew new classifieds and the only one I could do was Scanning his HVT with my killer hacking ninja who was still in hidden deployment. But first I sacrificed another kuang shi and put a grunt and the minuteman under my chain rifle, all involved models went down. So the ninja spent all the remaining orders scanning the HVT, we got discovered by a grunt, exchanged bullets with a maverick and went downt in this process, but at least he did the classifieds.

He drew HVT inoculation and did it with his 112 on bike, there was nothing I could do about it and I was in retreat at beginning of my turn. So game ended with an: