In the churning Daath-mind of ALEPH, tactical computations run at a constant fever-pitch. Somewhere in the Edge an entire asteroid, hollowed out and quick-fabbed into a quantronic processing core radiates runs on constant overclock, radiating enough heat to broil an unprotected human in their own skin.

There are disquieting developments in Novyy Bangkok. The presence of Combined Army elements was a known factor; threatening, but no longer unexpected. New evidence had arisen however, circumstantial but actionable, of a Nomad commander having been suborned by EI agents.

Such a thing posed a significant threat. Most Human Sphere forces tested rigorously for Sepsitorization, especially at Paradiso, but the Nomads had always kept themselves apart from how most people did things, and they were quick to interpret reports of Sepsitorization as allegations meant to pull their operatives and officers into interrogations run by ALEPH or those in its pay. To their credit the Nomad’s did seem to take the threat seriously, and their security was supposedly no less rigorous than anybody else on the Paradiso front.

Supposedly. On the Paradiso front.

If one of their commanders had been suborned, whether by EI VoodooTech or conventional persuasion, it was possible this development had slipped under the radar. From there, who knew what havoc they could wreak, hidden behind the Nomad’s militant secrecy?

Under normal circumstances, an investigation like this would be entrusted to a hardened Aspect-commander, but with resources stretched thin by active Combined Army efforts and regular human infighting, needs must.

Those of you who have already read the linked battle report know how this ends: I dipped my toe into this event at the end, just in time to say I didn’t miss it, and got my keister handed to me. This, therefore, is going to be less of a battle report than a post-mortem – SkyKnight already laid out WHAT happened, I’ll be going over WHY, and what I should have done instead.

As a disclaimer; I don’t take photos, for the simple reason that I don’t have a smartphone with which to take them. I am thankful to my opponent’s skill in creating powerpoint maps, but I’m afraid that’s all you’re getting. 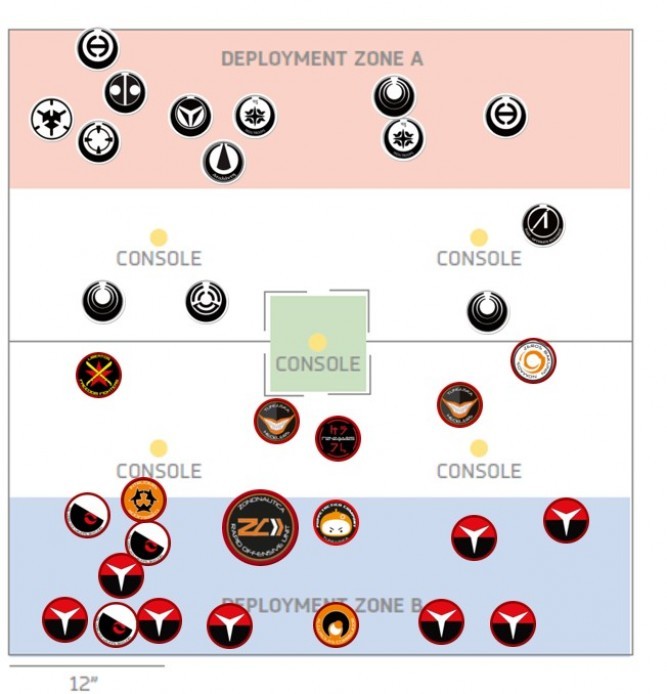 As SkyKnight said, my decision to take the second turn, and that was a mistake. I've heard it said that the best way to improve at this game is to go second, force yourself to learn how to deal with an enemy push and think about how to deploy reactively – and maybe that's true. But this wasn't a lesson, this was the time to put my lessons into practice. I brought an aggressive list, and I should have BEEN aggressive with it from the outset.

With that in mind, how was my deployment?

Well, from my perspective, I was looking at a net of camo markers, behind which lay a juicy nest of order cheerleaders – that I hadn't the slightest chance of getting to without shedding plenty of blood, as the mission disallowed any form of Combat Jump. So I dug in as best I could and made sure I had good sight lines. My problem, in a nutshell, was that I was too willing to use power pieces as blockers – I knew I had to put up a defence, but I didn't stop to think about what I needed to defend.

Example; that little triangle of Atalanta, the Myrmidon Officer, and the Yadu? Those were keystones of my battle plan. Smoke games with Atalanta are brutally effective, and I knew I had to protect her, squishy as she is, so I had her prone on a rooftop behind a billboard – but the Myrmidon was sitting there watching a corner, when they were my only smoke. I figured, hey, cover, an ODD AND NWI, they're safe as houses, right? Ahaha, if only.

That proxy over on the right, my left flank? That was my liaison officer, someone I needed o keep alive, while I had Dart sitting back watching their back. They should've been switched, or hidden entirely. Oy. 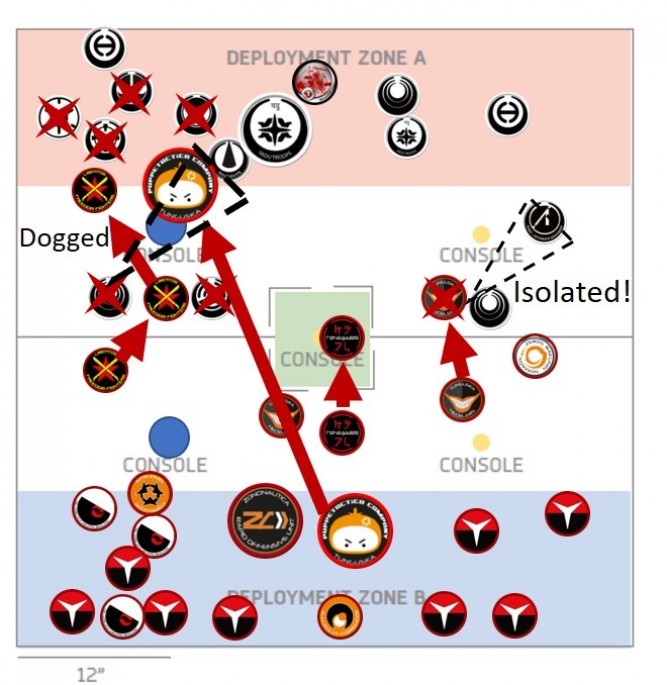 A lot of the vicious drubbing I took here in turn 1 was pretty unavoidable in light of my deployment – but there are some things I could have done better. In a nutshell, I was far too willing to throw good decisions after bad; the BSG proxy I revealed to get a cheeky shot on the puppetbots put SkyKnight in an awkward spot, but it was early enough in their turn that they had plenty of options to work the problem, when that proxy could have been brutal on my active turn, and probably solved the puppetbot problem by itself. Revealing the Naga after that was an utter waste, as it couldn't even save the proxy. Yes it killed the Libertos, but doing so cost me an order while I was already bleeding hard. 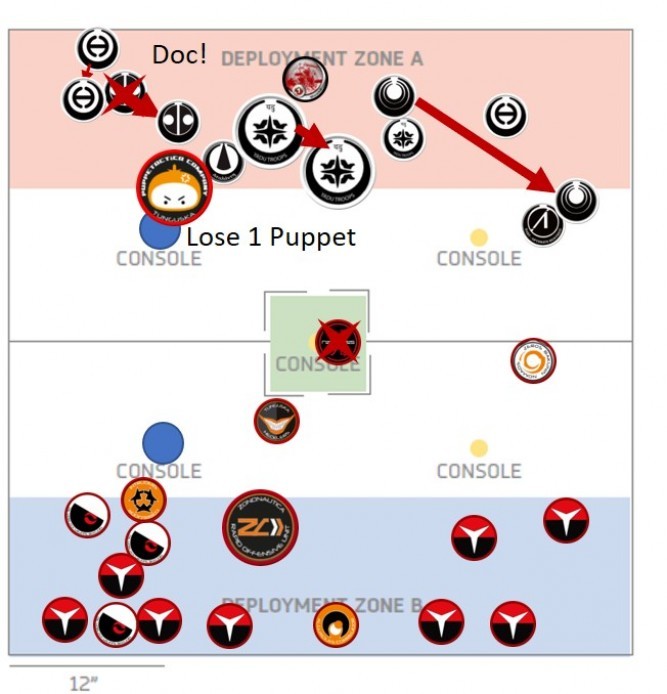 Five orders down already, I finally pulled my head out of my arse and made some smart plays. Reviving the Thorakitai cost me an order, but more importantly it got me flanking fire on the puppetbot team that the Yadu would've had to go head to head with. That was a decent play, but it was basically all I had left in me. 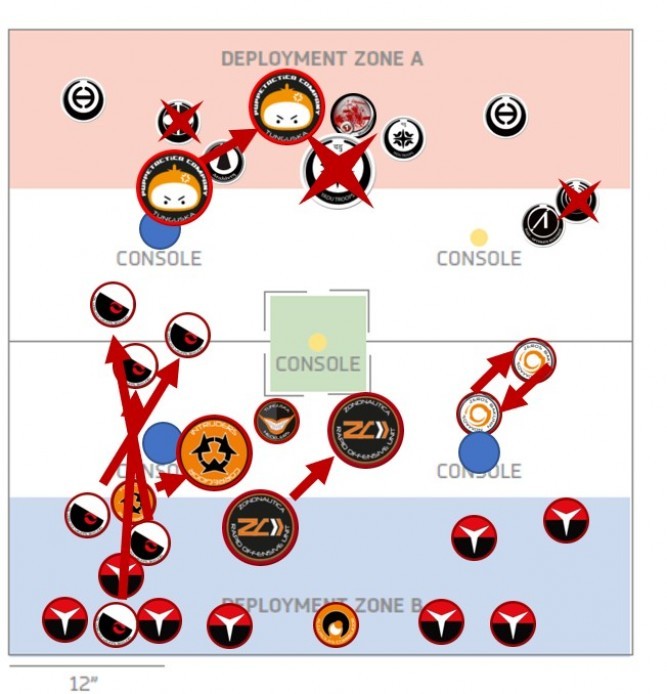 SkyKnight's button-pushing did waste a chunk of time, but in fairness to them they did also kill the last of my specialists this turn, and when you have something like a five to one order advantage I can hardly blame you for getting a LITTLE complacent. 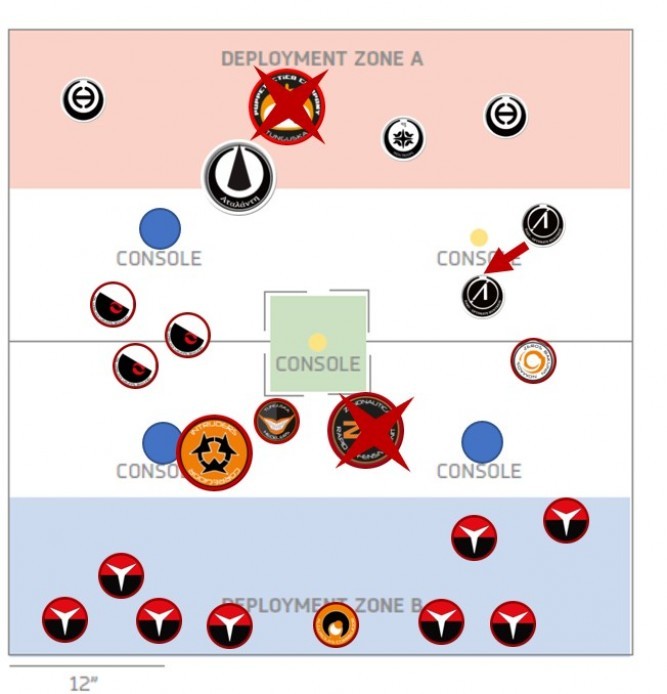 Dart did me proud here, the way she drilled the Zondnautica that had harried me so much, but even with Atalanta putting the puppets down as well, this is something I should've been doing on turn 1. Without smoke cover from the Myrmidon I was far too cagey with Atalanta, ignoring that even without it she's still a flat BS17 MULTI sniper who could have solved some problems much earlier. Using her this late meant the situation was so dire I could hardly help but expose her.

That said, yeah, I bodged it on her facing for SkyKnight's third turn. I flat hadn't noticed where the ladders were on that building – if I had, maybe she could've plugged the Morlocke with a pistol shot for better odds of contesting the CC attack. By this point though I was deep in despair and seriously considering just conceding, so I wasn't entirely paying attention. 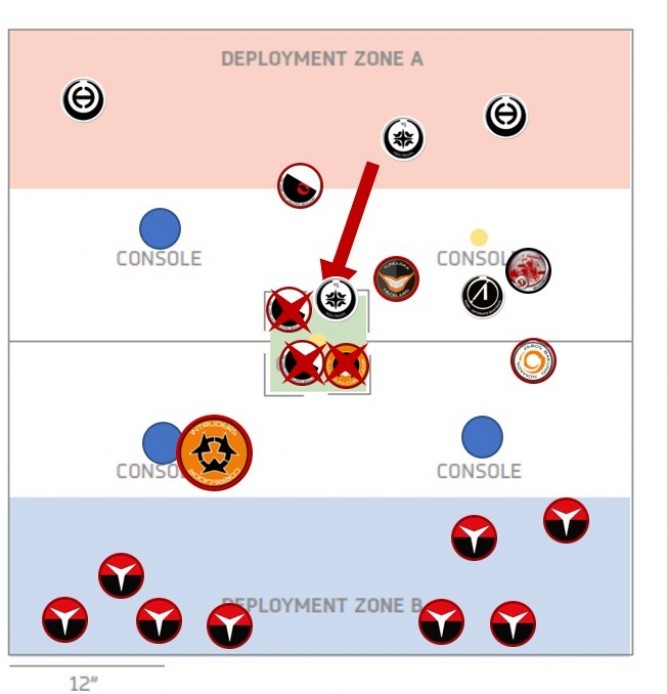 No one has recommended Imrix for commendation. Log in to be the first.