Infiltration at the spaceport

The spaceport was bustling as ever, even with the Shasvastii having infiltrated the area. High command had given out multiple objectives to accomplish and completing them in the shadows would be impossible for the time frame at hand. An HVT had to be scanned using their high-tech visors, information had to be uploaded into the enemy’s data bank, the destruction of the medical bay needed crippling, and for good measure, the enemy had to be destroyed up close and personal and recorded in as grisly a manner as possible. It was time for mass panic and mass confusion to help hide the objectives. It was time to unleash the Tiaga.

Civilians and port workers panicked running from the terrible creatures moving at inhuman speeds. To the credit of the humans, only a few civilians were devoured by the Tiaga before the Ariadnan defensive forces quickly responded. Bullets rang out and the grotesque creatures began to fall, however it allowed the camouflaged forces of the Shasvastii to spot their enemies positions. A Gwailo was one of the first to spring into action. It launched multiple salvos into the brave defenders securing the office complex. The flames and smoke masking the carnage only leaving the cries of the burned. Moving quickly, the Gwailo approached the medical bay and then held his position. He wanted the security to see him. A small squad of heavily armored and armed soldiers rounded the corner to confront him before being stopped short by a well-hidden mine. While the remaining humans gathered themselves the Gwailo launched a rocket down the hallway burning any remaining survivors. He moved to his next target; a quivering civilian designated as the HVT. A quick scan was completed and uploaded to command.

After the initial shock of the attack, the humans were becoming more organized sending in soldiers through the side corridors to flank the Shasvastii intruders. As one drew a bead on the dangerous Gwailo, another mine detonated sending the soldier to a quick death. A new soldier replaced her position and took unloaded armor piercing rounds into the Gwalio felling him. However, it was a short-lived victory. As the soldier reload his gun, a Shrouded quietly uploaded a virus into the soldier’s equipment. Another objective accomplished. The infiltrator then rounded the corner and placed a present near the threshold for the unknowing patsy soldier. Then the area was engulfed with flames detonating the well placed mine as well as sneaky Shasvastii. A human sped down the corridor on a bike was lighting up the area with her light rocket launcher.

To contain this high-speed threat, a lurking Caliban emerged from hiding and engaged a gun slinger in brutal hand to hand combat. Quickly swinging around it struck the outflanking soldier gutting him before he could cause any more damage. It’s recorder capturing the last moments of life from the humans which were auto uploaded to command. The Caliban now fueled and powered up from its two kills engaged the motorcycle soldier in a heavy firefight. Eventually the human succumbed to the onslaught of submachine gun fire as the Caliban hastily ran down the Med Bay corridors. It planted it’s D-charges and watched as it went up in smoke. The job was done and the Shasvastii strike team slithered out of sight. 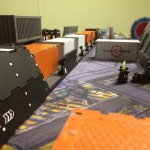 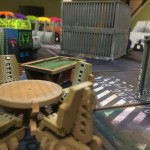 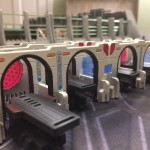 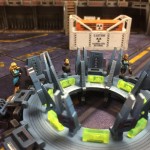 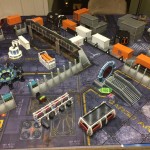