Fought At The Gallery Maze: The Passageways
1160 days 6 hours 53 minutes ago

Firing down the Passageways 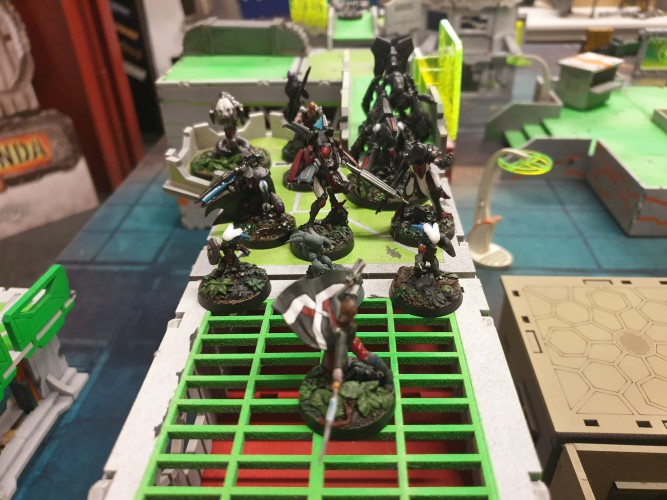 Shasvastii Forces under the control of Mentor Guerra

Aleph Forces under the command of Thamoz 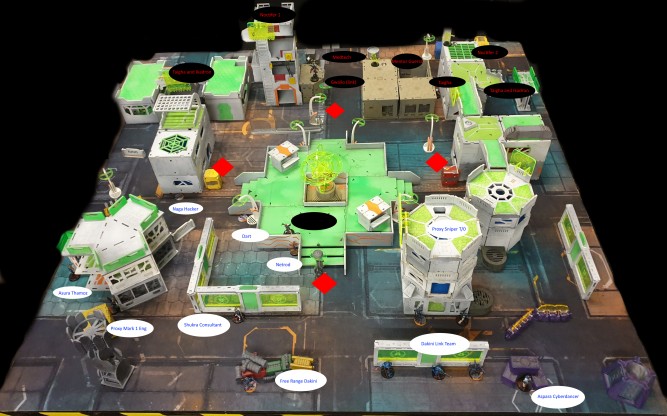 After dragging the corpses of the PanO forces into the drop ship to be sepistorised or maybe just consumed by the Calibans, Guerra had recieved a message from the EI.

"Congratulations on the success of defeating the ambush Guerra, this is another day to be proud of... However the hornets nest has been disturbed and the remaining forces alerted an OSS patrol in the area. Be warned you have an hour estimated to prepare. Additional assets have been dispatched and should be with you shortly. Additional weapons are authorised for this mission. Do not fail..."

Guerra wondered what was meant by additional assets?

Guerra was satisfied the EI had sent him further reinforcements in the form of two Noctifers and Ikadron remotes to resupply the ammunition for the troopers. An E-Drone accompanied by Victor Messer was also diverted to the defence of the area designated as the Passageways. This was going to be interesting...

As the Aleph units came into view Guerra surveyed them with disgust, mainly a force of remote controlled units and Dakini designated units. Guerra caught a glance of an Asura unit this filled him with anticipation these units looked like a normal female human but were infact almost as tough as TAG units... He was glad of his reinforcements he would need them!

With a command to his Taigha beasts they blitzed forwards the first one managed to catch a Naga unit who seemed to be panicked by its appearance and was torn apart with the beasts claws with the Taigha dying in return. A worthy sacrifice...

On the other side of the battlefield the first Noctifer had moved to the edge of the roof and took aim at the Antenna unit. Much to his shock a blur of heat haze revealed a sniper proxy unit on the roof of a tower nearby. Luckily the noctifer was able to survive the bullet hits to its chest and signalled they were undamaged.

Gwailo Ereas raised his rocket launcher and commed Guerra that he would deal with the situation. Guerra was not disappointed as the point where the proxy had stood turned into a firestorm. Perfect!

Just before they lost the initiative Guerra pushed one of the Ikadron remotes into the link team of Dakini units to take as many of them as he could with him.

All in all a good strike into the enemies heart! 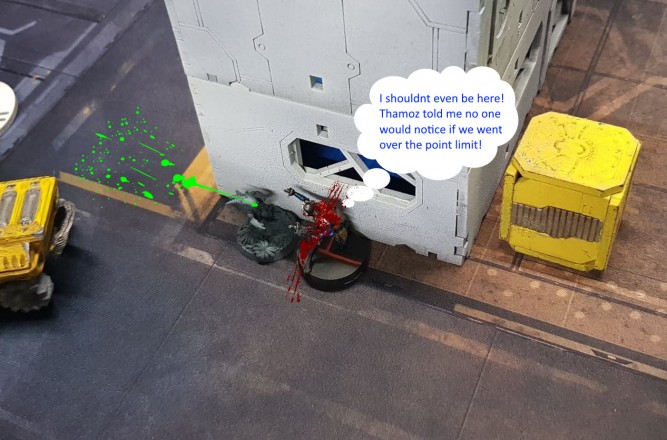 Although there numbers seem overwhelming the Taigha helps Thamoz cut those additional points from his list the only way he knows how... 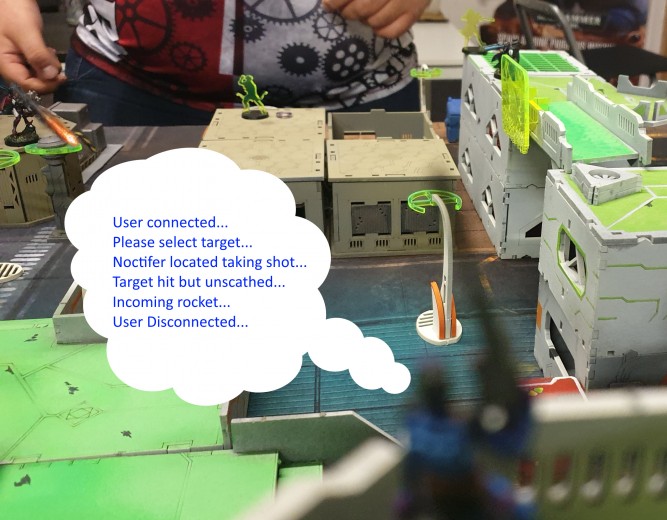 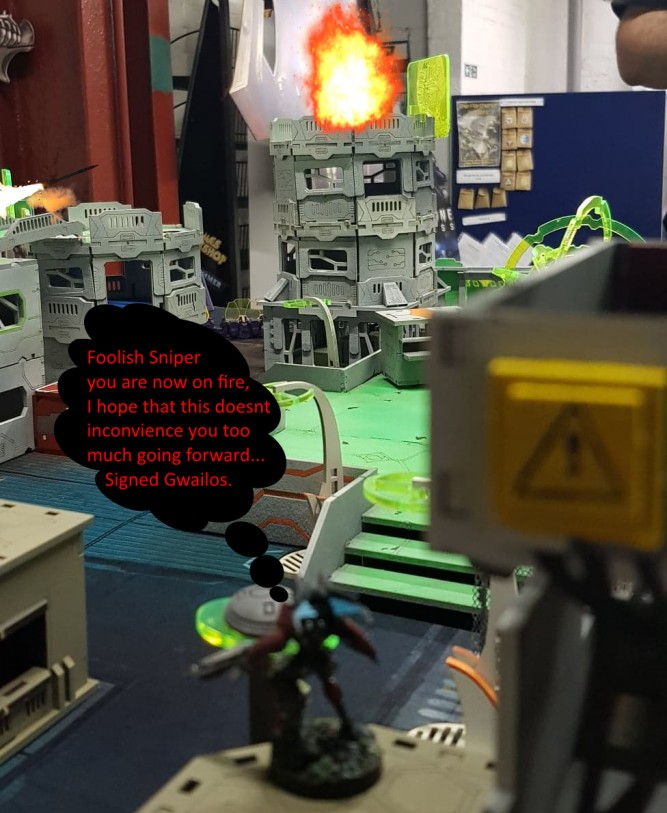 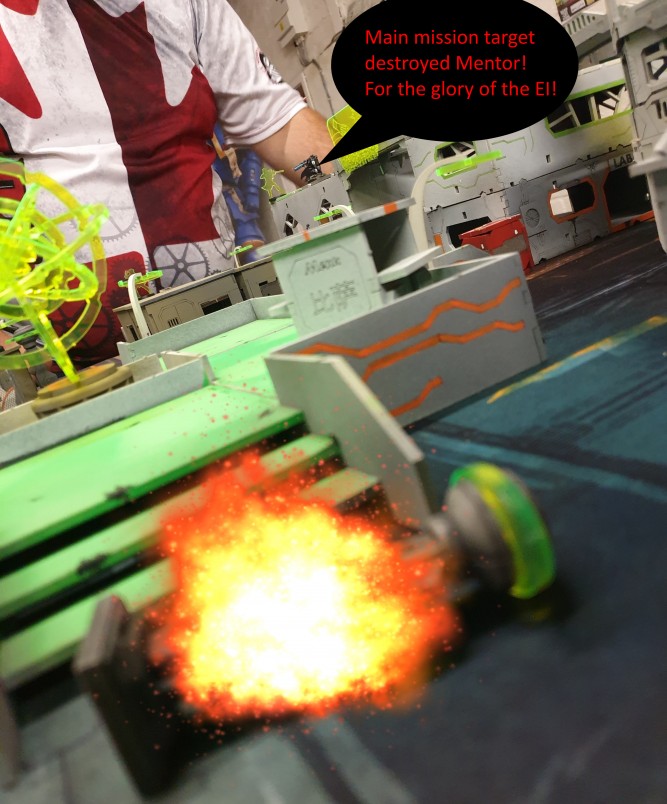 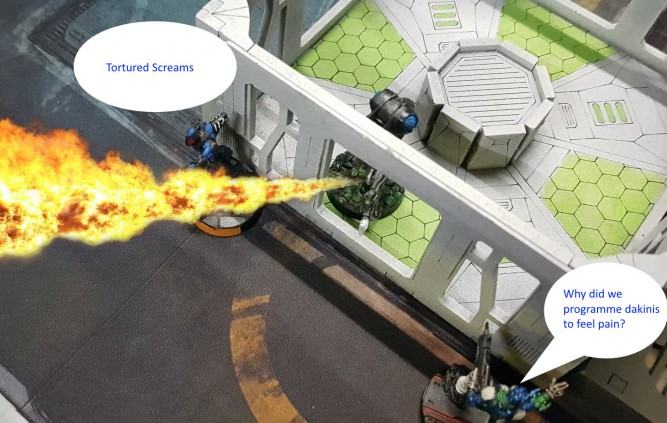 Guerra watched with interest as the Dakini peeked round the corner, Noctifer Trainee Bareal placed a missile directly into its chest plate. Another fantastic performance most of their threatening troops had been removed from the equation.

He then remembered that no further sign of the Asura had been reported...

With a shout from the Noctifers she emerged from around the corner and took a direct hit to her chest without falling dead... and Noctifer Raswell was caught by her spitfire he doggedly shrugged the blow off and kept firing into the machine woman.

Gwailo Ereas managed to put a rocket into her and she walked forward through the firestorm her fake skin melting off he was repaid by a bullet to the chest. Guerra could see him drop prone alive but wounded. Damn.

Finally a missile caught the robot in the head and it detonated on impact the body of the machine falling to the ground still twitching... he heard Noctifer Raswell above him on the building to his rear slump to the metal of the roof and stop moving. 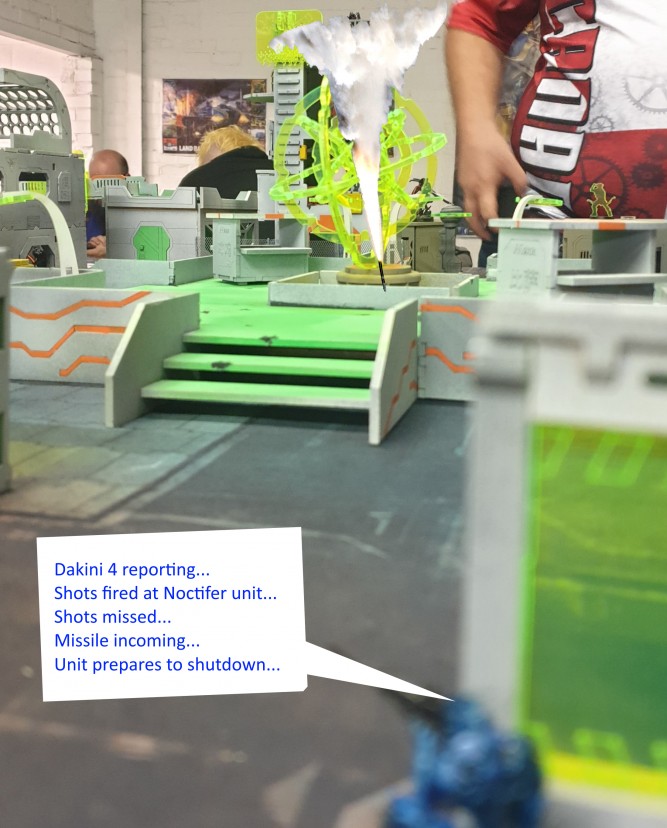 Dakini has made poor life choices... 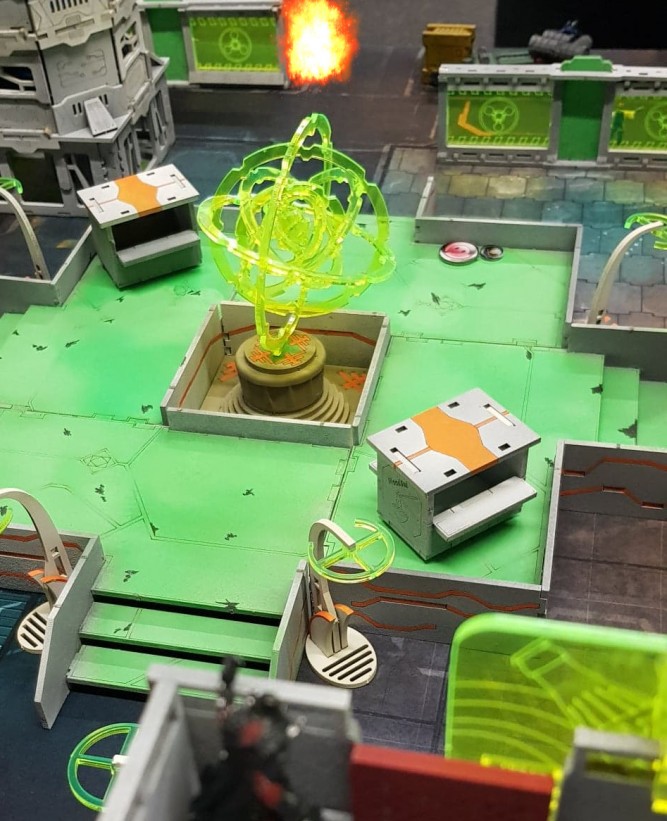 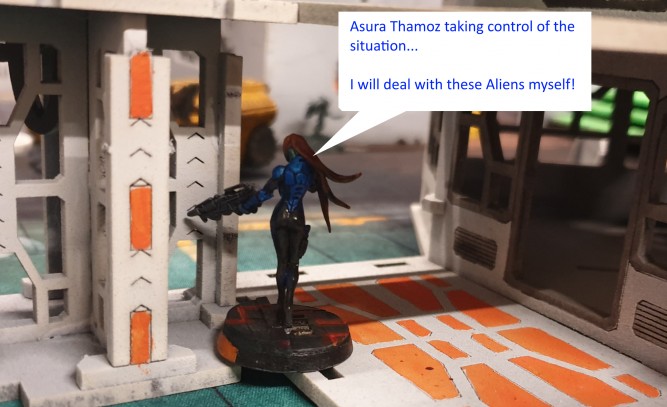 Thamoz takes matters into her own hands 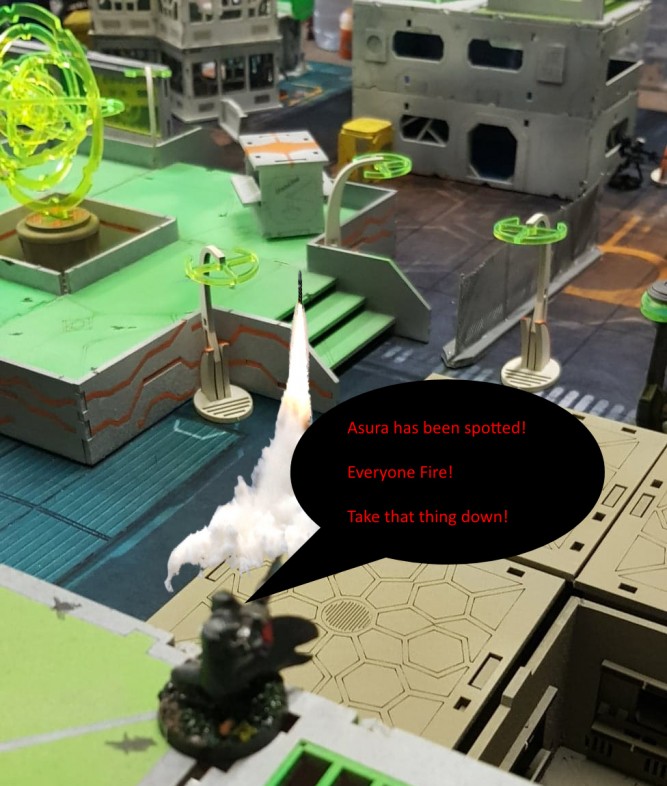 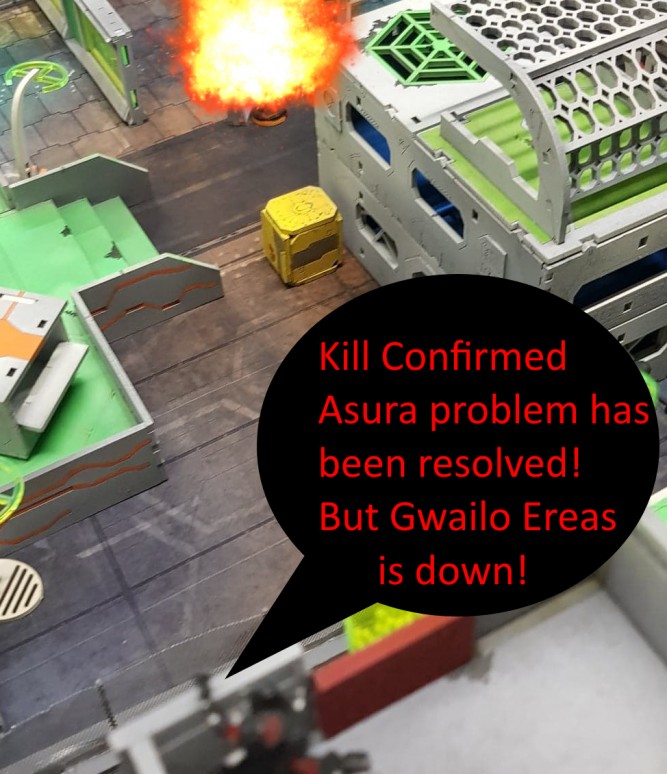 Asura dies as she lived in a hail of Missiles and Rockets...

Still elated from the destruction of the Asura, Guerra ordered the Medtech forward to revive Gwailo Ereas.

The last remaining Taigha rushed forward only to be met by a hail of bullets from a dakini, the creature exploded in viscera... Guerra cared not they had served their purpose...

Now was the time to move forward and secure the secondary objectives that he had been sent. The Med-tech slithered forward down the right of the battle zone. To one of the convenient boxes with equipment that were just lying in the middle of the area... 'Strange' thought Guerra but he wasn't about to look a gift in the mouth.

Onward the Med-tech pushed and attached Demolition charges to the building that had been nominated for destruction.

With a detonation Guerra knew he had been successful!

All according to plan... 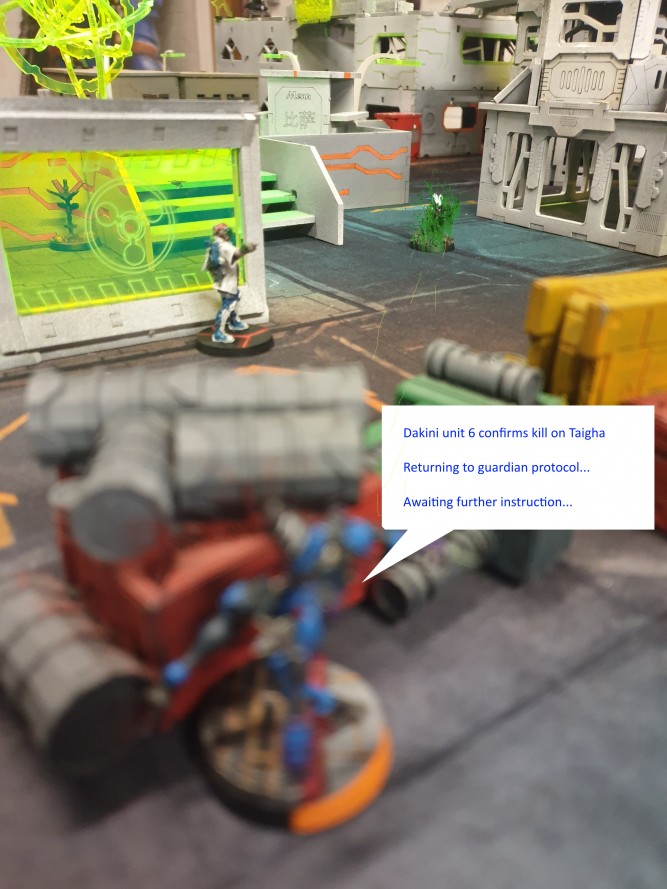 Taigha trooper assaults the firebase of dakinis... to no avail... 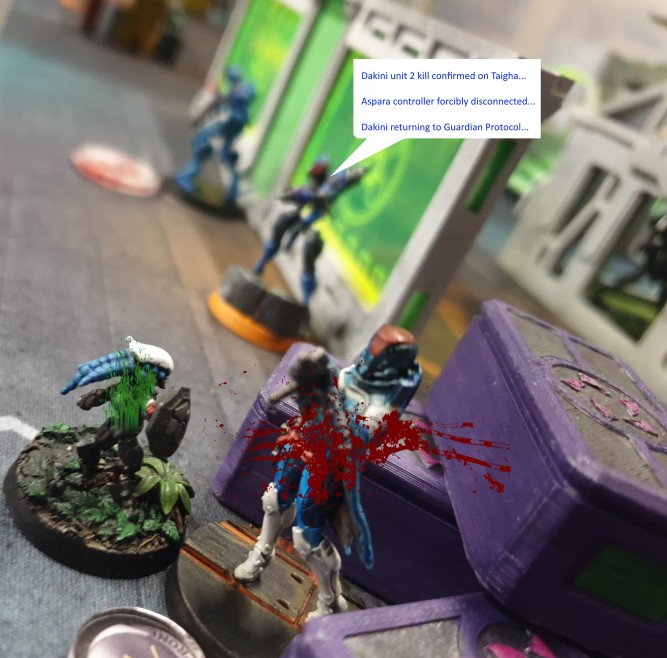 Taigha makes light work of the Aspara dancer only to die in return...

Guerra watched as yet another blonde woman emerged from Camouflage and stalked round the corner of the building and put her boot into the skull of the Taigha creature that killed the Naga. No doubt a secret objective of the Aleph...

She swept round and Guerra kept in his own camouflage ordering the Gwailo to deal with her...

Ereas missed completely the rocket smashing into a building behind the woman. Bullets tore into his armour and the proud warrior collapsed and died almost instantly...

The woman snuck round appearing on the E-Drones scanner.

The enslaved robot powered creature tried to spray her with bullets but again the woman managed to kill it.

What was she made of!

Finally he intercepted her communication

The proxy was moving on the Antenna! She must have the last of their explosives!

He knew just the Shasvastii for the job... 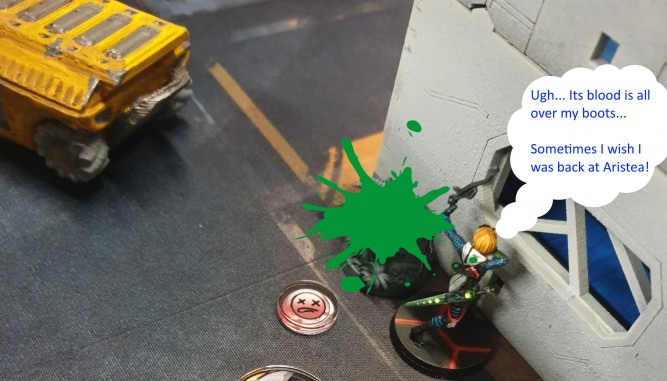 The Taigha's skull is caved in taking it out of its misery... 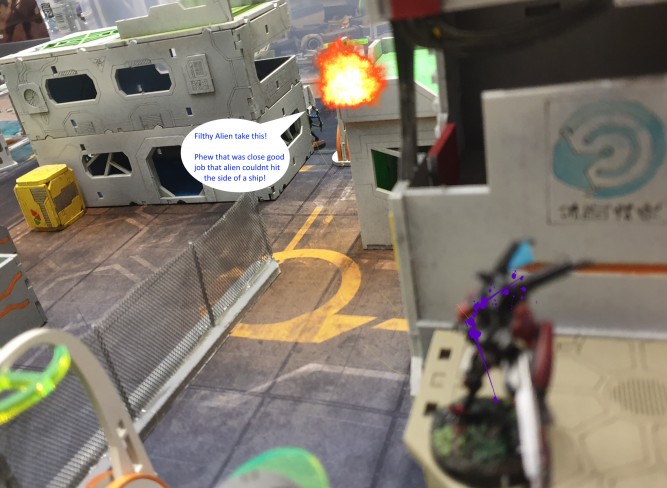 Dart kills the heroic Gwailo, Another one snatched from the world far too young... RIP 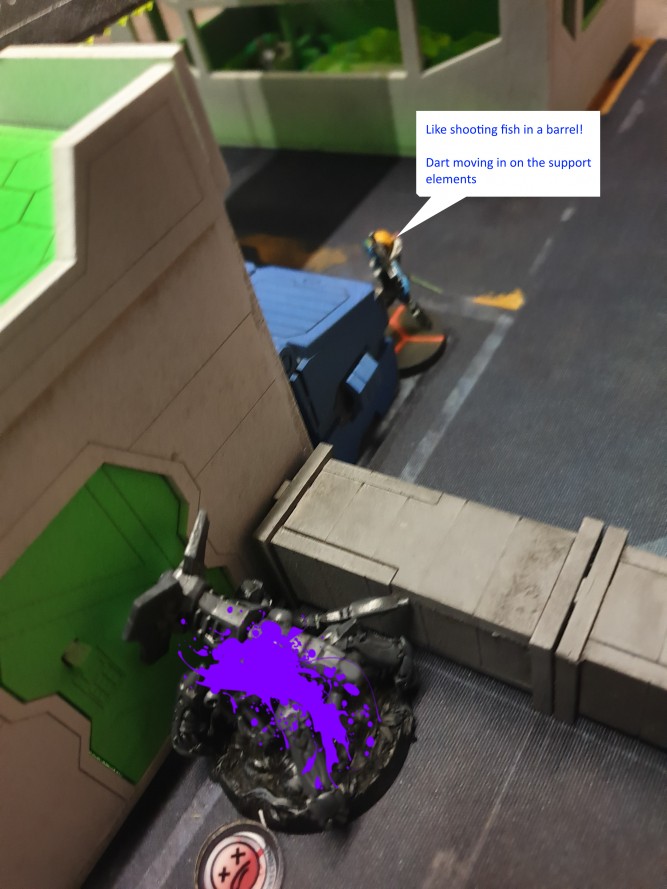 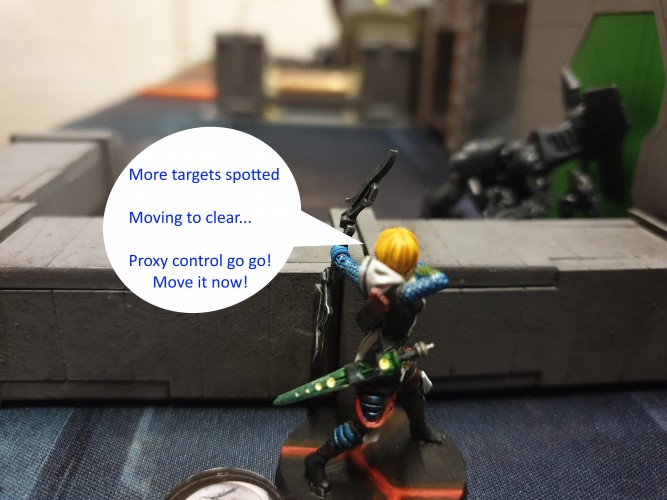 Dart under fire from the M Drone orders the proxy to assault the Antenna...

Guerra knew he had one hope to stop the Aleph getting near too the Antenna he had worked so hard to secure.

With a confirmation of receipt Speculo Hannar snuck up behind the proxy. This would be easier than Guerra had expected.

And then somehow the Speculo was dead...

He saw from her feed that the bag over the shoulder of the proxy unit was drenched in blood... 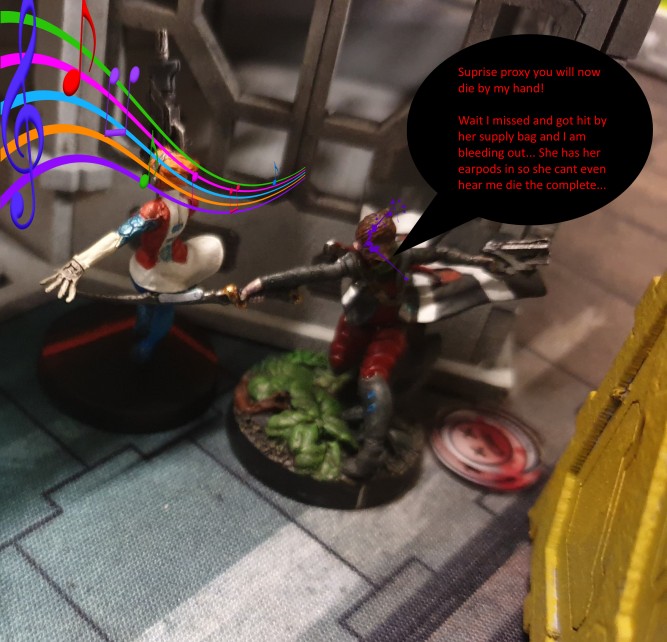 Trying to secure the Antenna Speculo Hannar assaults the Proxy only to fall the to the mightiest weapon in the Sphere a bag to the head...

He would wait in ambush until the proxy came into range...

She was sprinting forward bobbing her head in time to the music he could hear blaring from her headphones... So disgusting how could the humans not take battle seriously!

When she was in range Guerra unleashed his shotgun at the proxy. He would deal with this himself!

As she blitzed down the road Guerra shot her again joined by Messer adding to the weight of fire.

The thing was torn apart under the damage but still attached the explosives to the Antenna.

Guerra ducked to avoid the explosion

After a few microseconds a small pop caught his attention as the failure to detonate of most of the charges left the antenna with minimal damage...

He chuckled as the remaining bots scrambled away 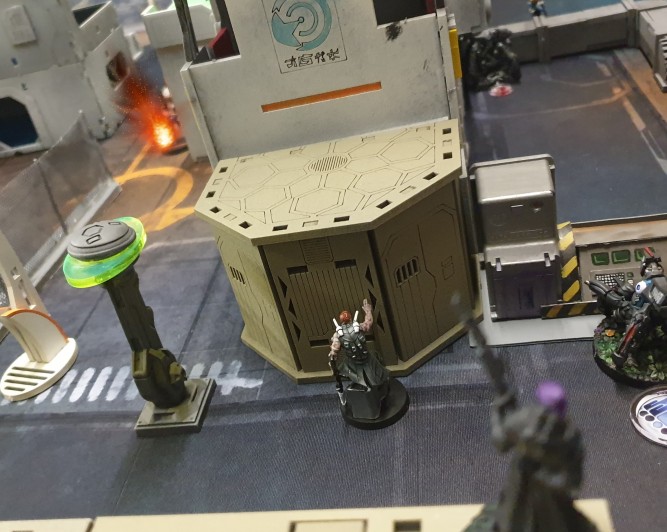 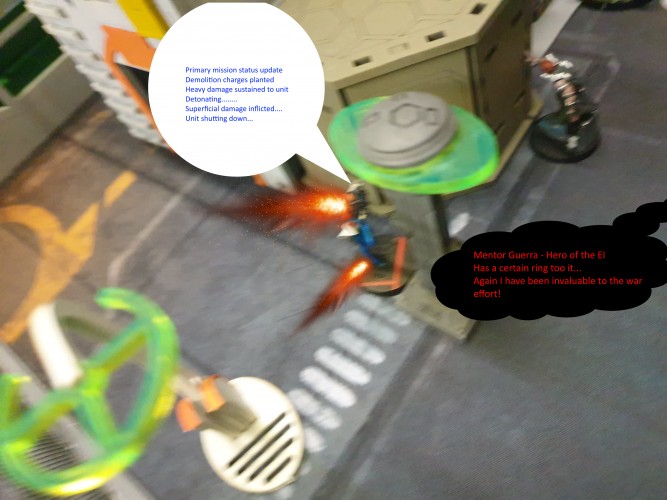 The proxy reaches her goal only to be torn apart by Messer and Guerra. Before she dies the proxy manages to attach the D Charges to the Antenna achieving on point of damage.

Another great battle with Thamoz

My first turn was very successful removing most of his anti-material weaponry and all seemed to be going my way when the Asura died.

However Dart carved a swathe through my backlines allowing the Proxy to get to the Antenna where luckily for me she only managed to do one point of damage to it.

Victory for the EI!