Fought At The Gallery Maze: The Chimneys
1058 days 9 hours 29 minutes ago

Here we go again...new campaign and I am hyped as hell. :D

As last year, feel free to click on my selection of music videos...for your enjoyment. Maybe give the artists a visit on Youtube or somewhere.

Edit: I must admit...some of my photos were simply too dark, so I only had limited numbers to sketch in deployment...sorry

After 9 months of work I finally finished a new table for Patrik and so we had to go for a game.

So while waiting for the campaign to finally go online, Patrik and I decided to go for a standard ITS mission: Countermeasures.

Concerning lists we didn't put in too much effort. Both of us took pre-existing lists, Patrik stuck to his Death Star, while I made some minor changes as I just had to take my new Journalist-Doctor-Enigineer for the fun of it...spreading the news to the homefront.

I won the Initiative Roll and decided to go first...never let the Death Star have turn 1! So I had to deploy first as well...let's do this.

I deployed pretty offensively, planning to go straight at it and play the mission. Pretty much my only real chance to crack that Knights Firteam was my Noctifer ML on the roof in my left corner. I held back the Speculo...just in case. 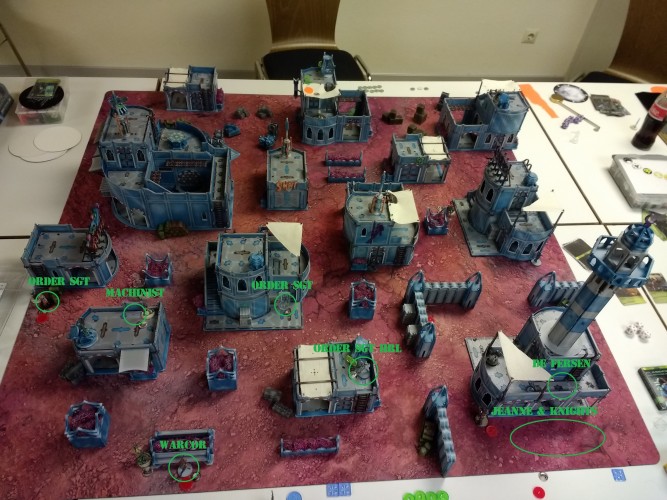 Patrik deployed defensively on his right flank, but left some space on his left. Both Order Seargeants deployed in Camo, as he tried to to trick me into thinking about Dart being present...quite succesfully. 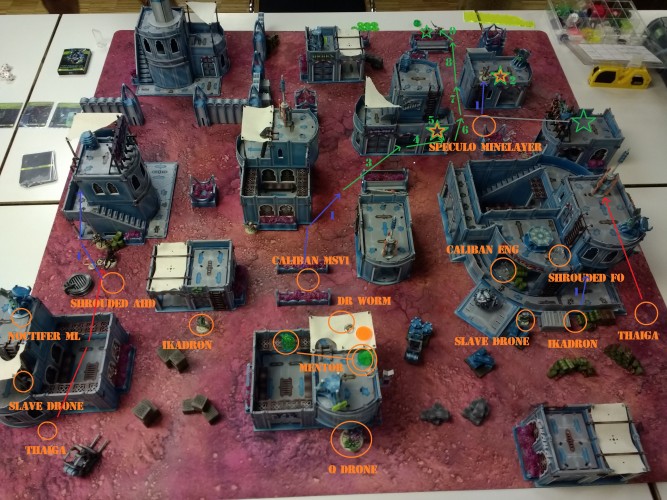 So I drew my classifieds: unfortunately I did not make not of what I drew and discarded...but nethertheless.

Impetuous orders went smooth so I coordinated and moved forward, the Speculo going for the Machinist. Knocked that sucker down bare-handed as I needed him unconscious, which worked and I got Capture. Then the Caliban went up and blasted the gun store with his D-Charges...second objective Sabotage accomplished. As he already was up there he went for the Camo on the left, discovered it and took the Order Sgt down. With the last remaining orders the Caliban went for the warcor, took a bite, gained a wound and waitied for what was to come.

Not all too bad...down on 7 orders and already 2 objectives done.

So Patrik needed to get rid of that Caliban, so his Link went for it. Everybody moving left, De Fersen taking a shot, but the Caliban survived on one wound...taking cover. So he went for him again...and this is where things began to get brutal.

My Noctifer was ablte to get a glimpse over the wall and took a shot on the guys on the ground...template hit all 4 of them...so everbody dodged. Noctifer rolls a 14, nobody dodges. HMG and Boardings Shotgun went down, Jeanne took 2 wounds, only the Doc came out unscathed. Bam.

So Patrik broke the link, the Doctor fixed the HMG dude, got a classified Experimental Drug with his Data Tracker and then moved his guys up to take care of that Noctifer. It took him some orders, but finally the guy went down and I chose to go unconscious instead of dogged. 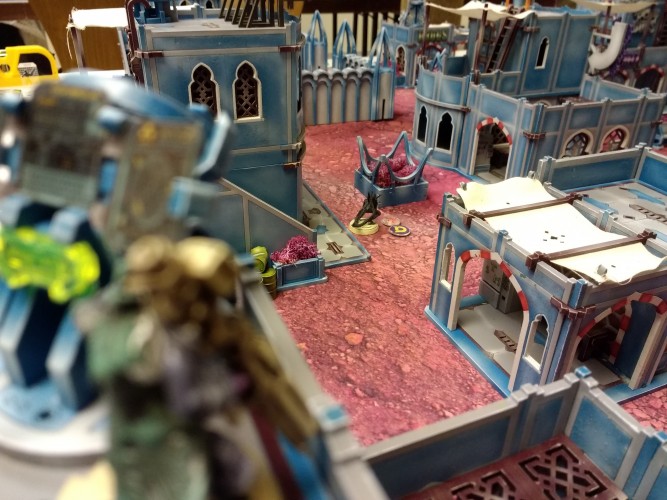 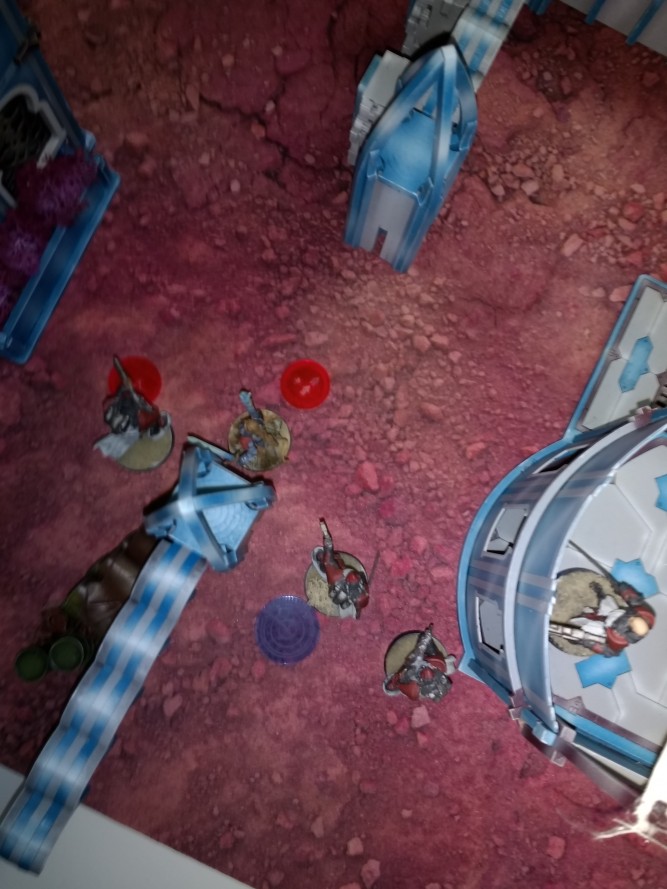 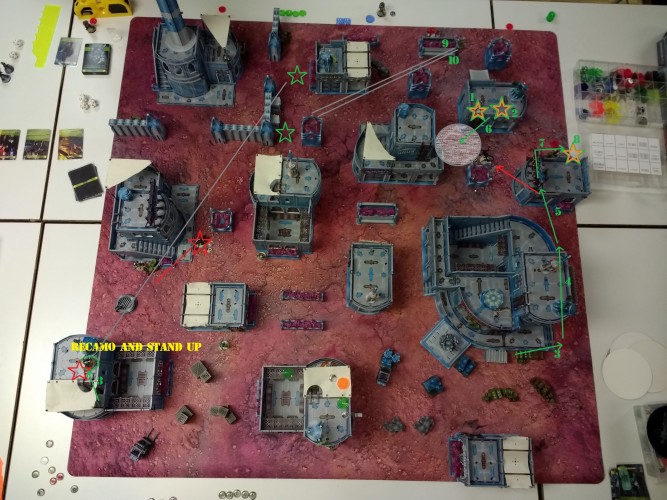 So Impetuous again. Left Thaiga goes down to the HMG. Then Dr. Journalist sent his little helpers to do things. Fixed the Noctifer but got shot down. Transforming both irregular oders of the Thaigas I recamoed the Nocifer, stood up and took a shot at the Doctor...hits an a 14...splatters. BRUTAL. Return fire from the HMG doesn't hit and the Link is broken again.

Now this was when the Speculo really shined. Accomlished Net Undermine and In Extremis Recovery in just 2 orders...I was really lucky at that point.

The other Slave Drone went forward on the right, Speculo threw smoke cover, and accomplished HVT Retroengineering for the Datatracker...Dr. Everything. So with 2 orders left, the Caliban went for the HMG dude and took him down as well. 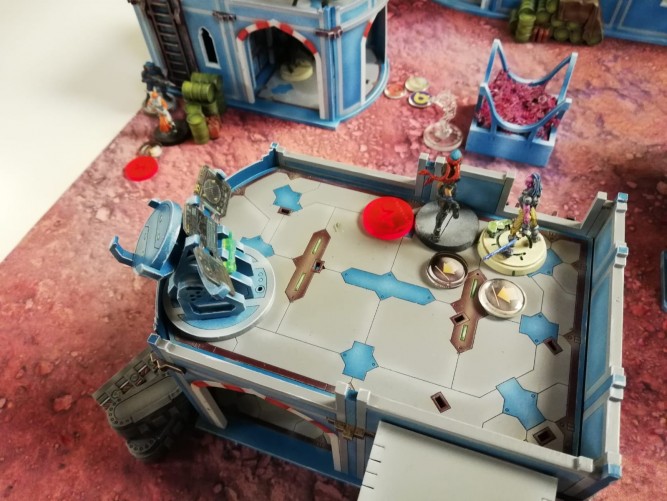 At this point Patrik was down on 4 orders, so I'll keep it short here...as we did at the table. De Fersen jumped forward and went for my HVT, but only managed to suceed in the third WIP roll for Identitiy Check...he could have done Data Scan as well.

So it was 5-2 on classifieds whe I took turn 3...so the Caliban killed the Warcor and with Extreme Predjudice done, the game was over. BRUUUUUTAL. 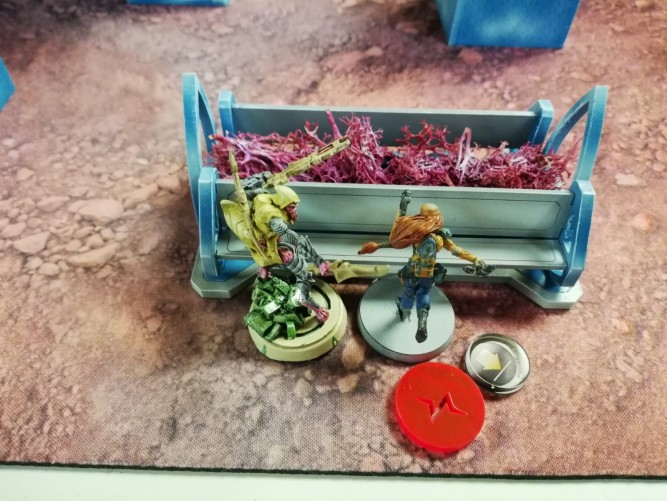 Shas only losing the Noctifer, this was a painstakingly BRUTAL win for the Frogs.

There isn't really that much of a tactical analysis at this point...Noctifer and Speculo did the job with some help from the Caliban. I cannot deny that I was unusually lucky with my Classifieds...so that's it and we went for some Kebab. 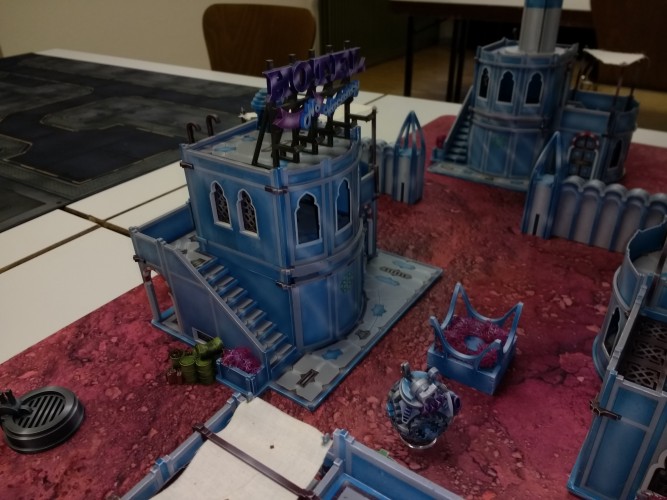