Responding to the call for aid, a detachment from the Invincible Army mobilizes and prepares to join in the defense of the Jade Empire's Quarry.

A Tunguska detachment is occupying critical territory and making an advance on Yu Jing supplies.

The Nomad forces have chosen to have a deployment advantage and Yu Jing forces have taken the initiative. The two factions are fighting over three supply boxes in the center of the engagement field. 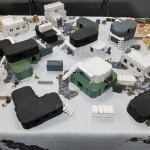 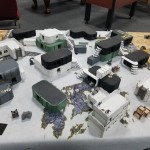 The Nomad forces brought a fully loaded Hollow Men link kitted out with an assault hacker, spit fire, missile launcher, multi rifle, and stemplerzond. They occupied a tall building to the right of Yu Jing's side. A clockmaker and his ghost bot laid in wait to repair any of the Hollow Men that may go down. There was also a camo marker (Heckler), a hidden deployed Spektrs, and Zondnautica unit.

The Invincible Army brought two three men link teams. One had a Zuyong missile launcher, Haidao (KHD), and a tactical awareness Zuyong with a tinbot.
The other team had a tactical awareness Zuyong with HMG, Krit Kokram, and a Pangguling bot. Additionally, the forces were led by a multi sniper DaoYing who took an advantageous deployment on top of a roof and had eyes on the Hollowmen link team. 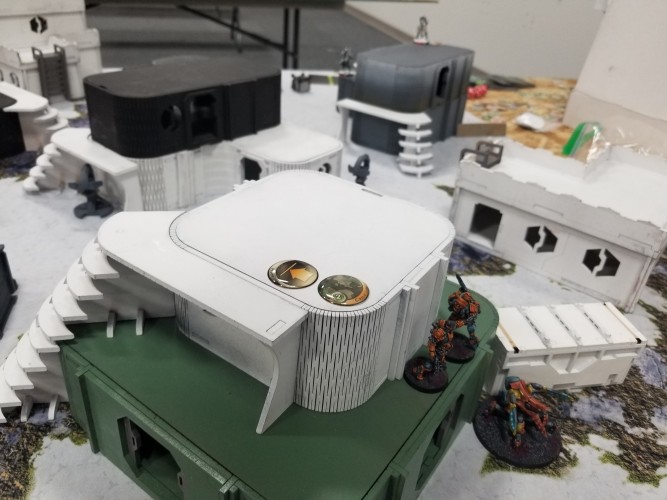 The Daoying Lt creeps along the rooftop and engages the Hollow Man on the highest roof equipped with a multi rifle. My opponet made a bit of a deployment mistake by putting the Hollow Man on the roof prone because he could be singled out. Fortunately for him, some lucky dice rolls make the shootout a bit prolonged. Eventually the Hollow Man is destroyed (unconscious lv2).
I then move the missile launcher link team out up the left flank and attempt to engage the Hollow Man also equipped with a missile launcher. The enemy is still in a link team so the target dice are identical. My Zuyong looses the engagement and takes a wound. Realizing the mistake, the Daoying moves up along her rooftop and targets the Hollow Man with missile launcher. This echange is more favorable to Yu Jing due to the camouflage modifiers and cover bonus. The altercation leaves the Hollow Man unconscious lvl 2.
However, the clock maker's little ghost buddy stands just behind the unconscious Hollow Men and awaits to repair them. To avoid this, I move up the right flank with Krit and the Pangguling. Krit grabs an objective while my remote moves into position to shotgun blast the unconscious missile Hollow Man. A hidden Spektr reveals and ambushes Krit who then takes a wound but is later able to escape with a supply objective. The Shotgun bot removes the missile Hollow Man completely but is destroyed in the process. 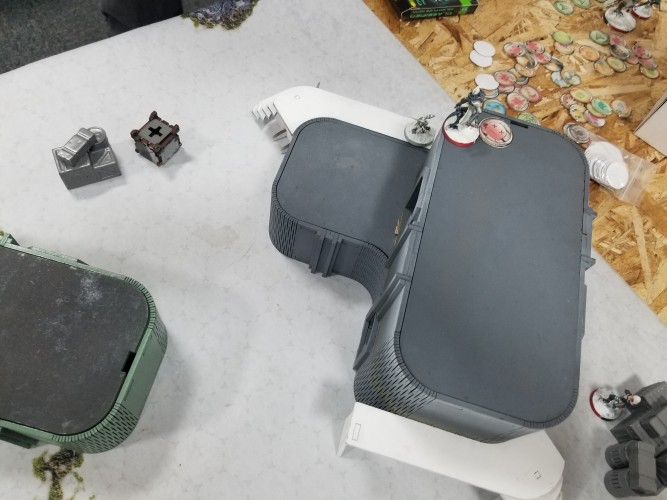 The Nomads begin their turn by moving up and smoking my sightlines with the Zondnautica unit. The clock maker repairs the Hollow Man on the roof and then reforms the link minus the missile launcher.
The Hollowmen move out and up my right flank. They are on an assassination mission for my Daoying Lt. The spitfire Hollow Man moves into position and eliminates my Daoying. Luckily, the Yu Jing Forces were anticipating this move and had a chain of command Haidoa deployed prone behind a barrier.
However, my opponent is cunning and sniffs this strategy out. The Hollowmen move all the way over to my side using their 6-2 move and superjump. They get into position and the spit fire kills my backup Lt. 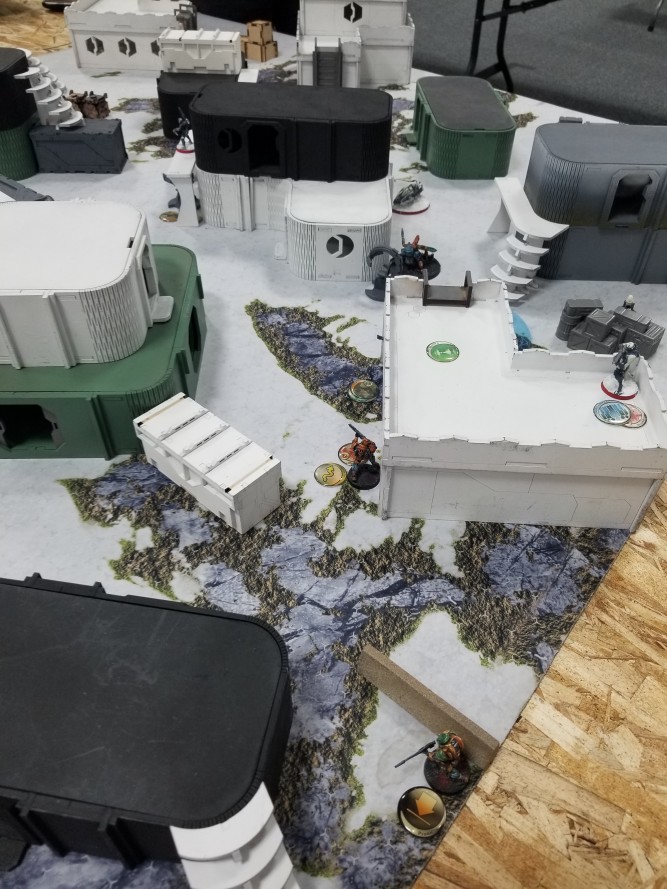 Hollowmen link flanking me and putting me into loss of Lt

I nominate a Zanshi hacker as my Lt and immidiately dump my command tokens into converting my irregular orders. The plan is simple...grab another objective and hold out for the counter ambush. I move the missile Zuyong out and start blasting away. He clears out the Zondnautica, and Heckler. This allows my Haidoa with KHD to move out and grab another supply box. He retreats so far into cover.
My Zencha in the middle of the board then mobolizes and smokes the Hollowman with multi rifle with his DEP. The exchange is going great until i get greedy with the Zencha and get him killed by trying to redeploy.
Krit makes a mad dash away from the Hollowmen to hang onto the objective and his HMG partner stays behind as a sacrificial ARO unit. The Yu Jing army has set its self up for victory! 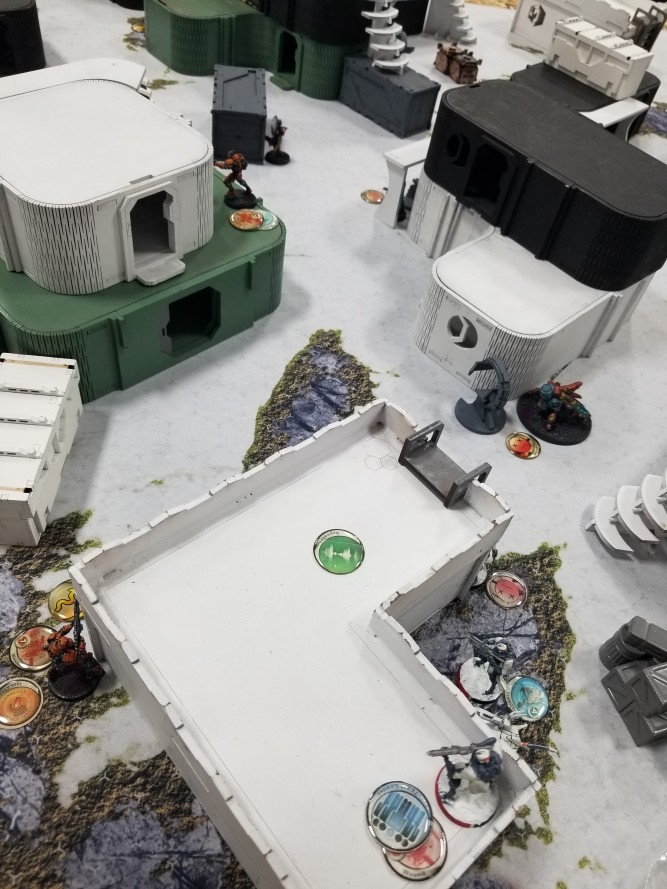 The final engagements and shootouts result in the Yu Jing forces taking significant losses including their new Lt and Krit. However, in all of the bloodshed, the Nomads failed to collect one of the supply boxes leaving the Invincible Army with one.
Although they suffered heavy casualties, Yu Jing leaves the field victorious.