– What was that? – asked Asuka when she heard distant gunshots. She leaned out of her TAGs cockpit. – Aoshi, go and check it.

Oniwaban slightly bows and disappears in the streets of Main Strip.

“Reporting. Here is a group of 12-15 Nomads. I see some morloks and they are assaulting civillians. Looks like they are searching for someone.”

– Strange. They shouldn’t be here, – said Hijikata, highest ranked kempeitai in the unit. – Anyway, our mission is clear and we should move to our mission… but we can’t let our fellow people suffer. So, what’s your orders?

All turned to Asuka.

– Our nation have suffered enough! – she said. – I don’t know what this nomad commander forgot here. Or maybe he simply has been bitten by some crazy morlok. This means nothing. So we will protect civillians at all costs!

“One more thing.” – reported oniwaban. – “I’ve noticed that they completely ignoring some of civillians. As if they are their agents or something.”

– This is interesting, – said Hijikata. -We should check this. Consoles in this area might give us a clue to what is happening here and whom we should interrogate. If possible.

– Right, – agreed Asuka. -Protect civillians and find out who is standing behind his mess.

Japan wins roll off and chooses to make it quick and decides to go first. 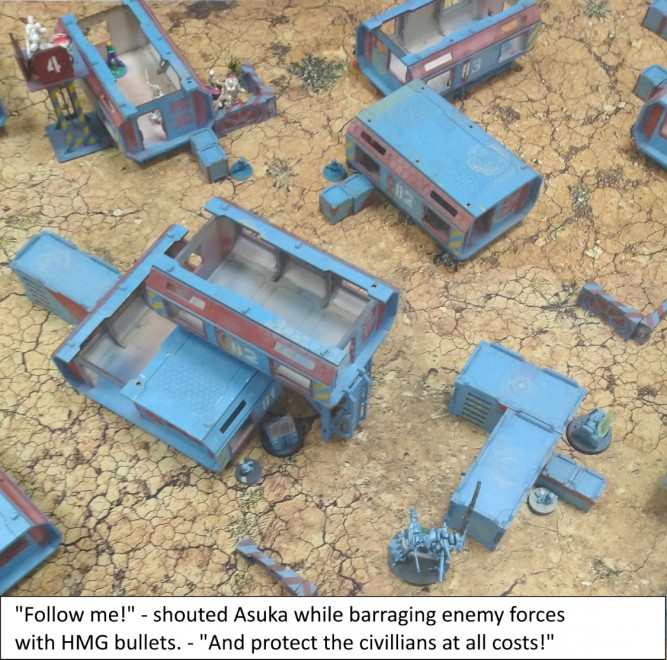 Shikami rushes towards console. When he reaches it, one camo marker reveal itself as Intruder with HMG. But shikami is lucky and win this shootout. Intruder fails his armor save and drops down. Shikami finally presses the button and tries to locate designated target. Alas, he finds only a decoy. 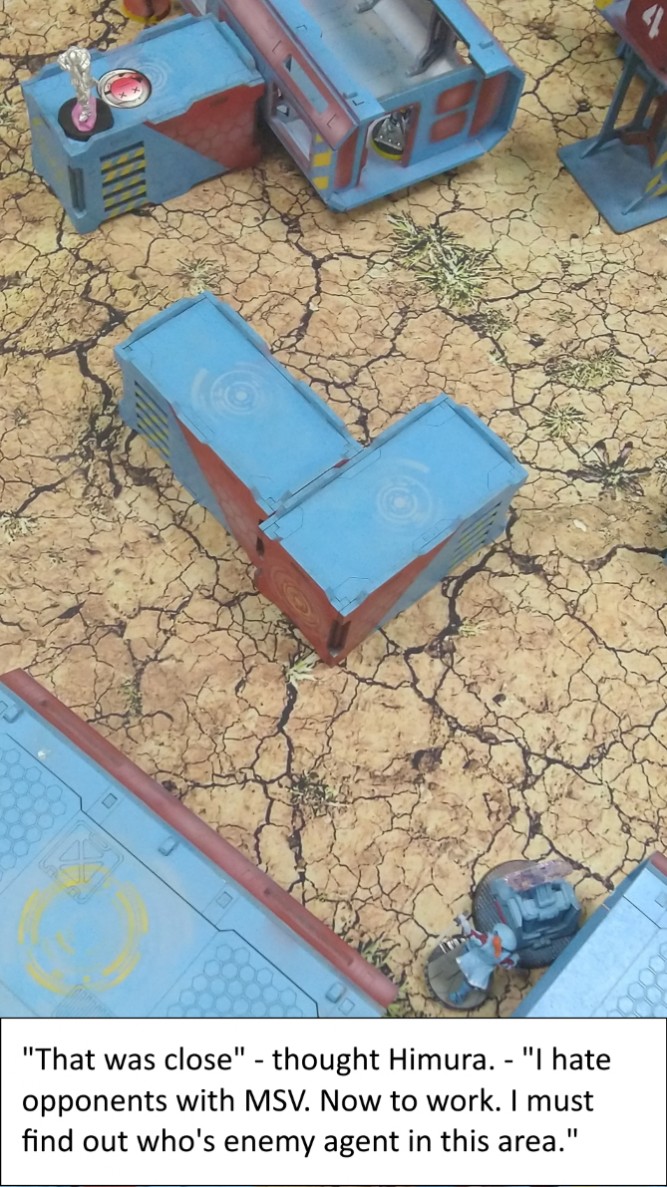 O-yoroi moves further and makes two holes in taskmaster, but gets a hit from warcor’s flashlight and manages to fail BTS.
Link is moving to more convenient position.

Turn 1, Nomads
Morlocks are charging. The first one successfully covers himself with smoke from shikamis ARO, but others are less lucky – second falls from O-yoroi’s shot and third from the kempeitai’s. The chimera wisely runs through the house where no one can see her. The surviving morlock comes closer and tries to get shikami with a shot from chainrifle, but he dodges and hides within a house.
Doctor heals the taskmaster. Taskmaster is trying to make a few bursts at O-yoroi, but understands that knocking with 13th force into ARM 7 and cover is quite useless.
Zero crawls to the console and tries to detect the designated target but reveal only a decoy. After that she moves to the house and inflicts a wound to shikami, who fails engagement roll.

Turn 2, JSA
O-yoroi finishes taskmaster. Again. Link leaves the house and gather near next console. Along the way Oyama gets a stun from warcors flashlight, but this means nothing. Kempaitai with MSV2 makes a maneuver discovery + shoot against last camo marker and blows away the second zero.
FO successfully presses the button but only reveals another decoy. 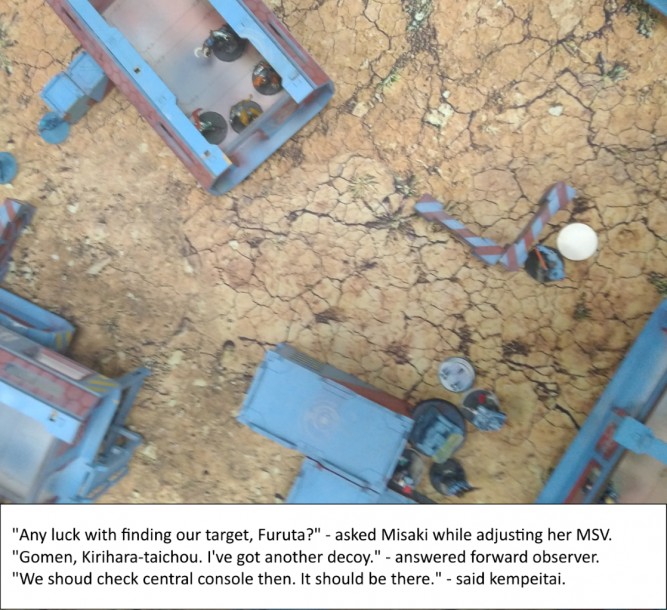 The lieutenant decides to do everything herself. O-yoroi moves to the last console, pilot dismounts and successfully identifies the true target. 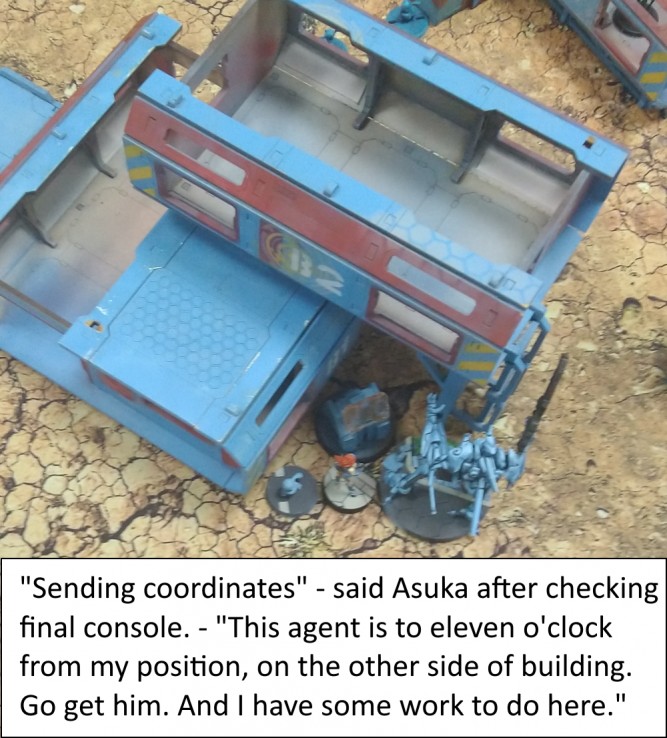 Then the pilot gets back into the tag and rushes to the enemy. First she shoots at the morlock, but he successfully hides within a smoke. Then o-yoroi sneaks up to the corner of the house and SUDDENLY charges into melee with zero. Poor fellow was splattered upon nearest walls after a strike from EXP-ccw with 18 PH. Having tasted blood, pilot charges her machine to next victim – morlok. But something went wrong … and morlok parry TAGs attack with ease. 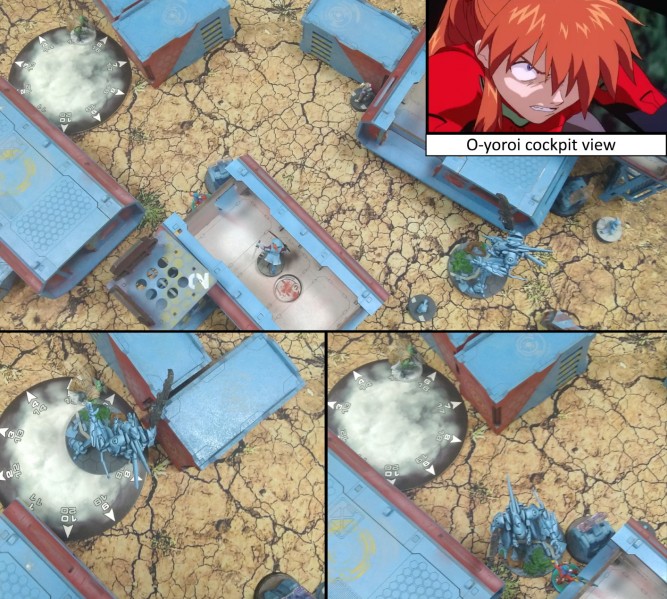 Turn 2, Nomads
Morlock fights surprisingly well and manages to make a hole in O-yoroi. Chimera on the otherhand is unlucky. She leans out of the house in an attempt to throw a smoke, but a barrage of fire from the link blows her away.
Morlock fights on and makes a second hole in O-yoroi. But everything ends sometimes and finally O-yoroi slays her target. Jaguar moves to O-yoroi and they make a shootout with templates – chainrifle versus heavy flamethrower. Surprisingly jaguar makes his save and O-yoroi do not and Japan loses its lieutenant. 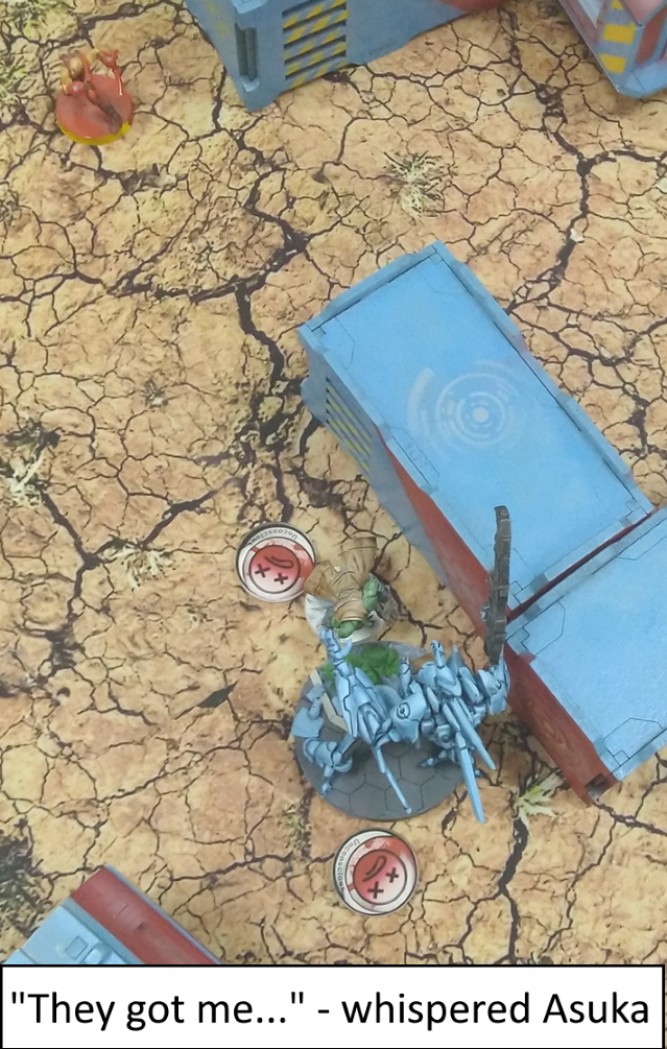 Turn 3, JSA
Japan is in the loss of lieutenant, but there is a kempeitai with CoC, so everything is fine.
Oniwaban appears near designated target and slays it. While doing so he forgets about second jaguar and gets a blast of chain rifle to his back, but successfully saves it. 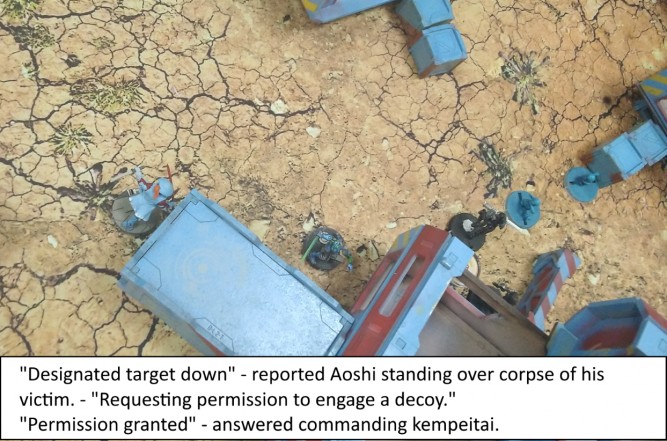 Shikami runs around the map and kills first jaguar, freeing the way for oniwaban to the HVT decoy. Then he sneaks behind the back of second jaguar, engage him and honorably kills him in a fair melee fight. Finally oniwaban kills the HVT-decoy.

Turn 3, Nomads
At this point, opponent is in retreat with have three models remaining – warcor, doctor, and alguacil lieutenant.
Opponent does not see what he can do and surrender.

– Well, I doubt that we can interrogate him how, – said Hijikata after examining body of suspected nomad spy.

– Fine, next time when I’ll meet a spy, I’ll cut off only his arms, – said Aoshi, checking his monofilament katana.

– If you, boys, are done here, we should find a mechanic and fix my Hanabi, – said Asuka. – If we hurry, we could catch up with our main forces. So let’s go!

1 Person Has Recommended Eruriku For a Commendation