It’s weird to realize you know somebody you’ve never seen before, isn’t it?

We were standing on the ready line of yet another training mission, this time to test the Ariadnans defending the Xarak’s Battery Field, when I saw them.

The Sophotect was walking down the line, clamping an electrified collar around around the neck of each of us, in order to “simulate a hit” should one of us get shot during this exercise. I’d worn them before, countless times. They were…unpleasant. A sharp shock to denote a non-lethal hit, and a jolt hard enough to knock you unconscious on a lethal one. 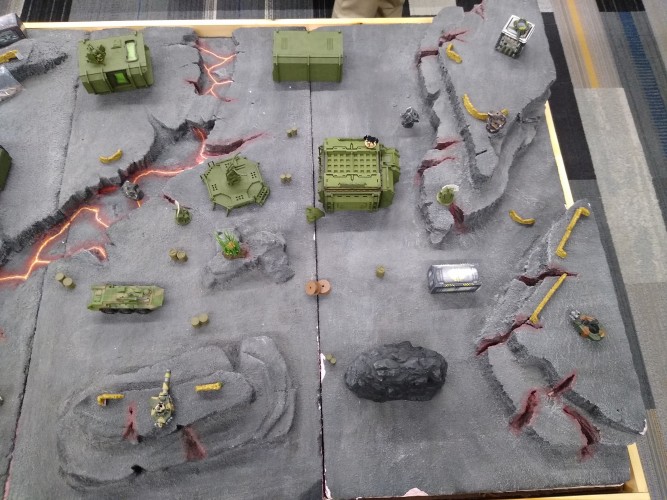 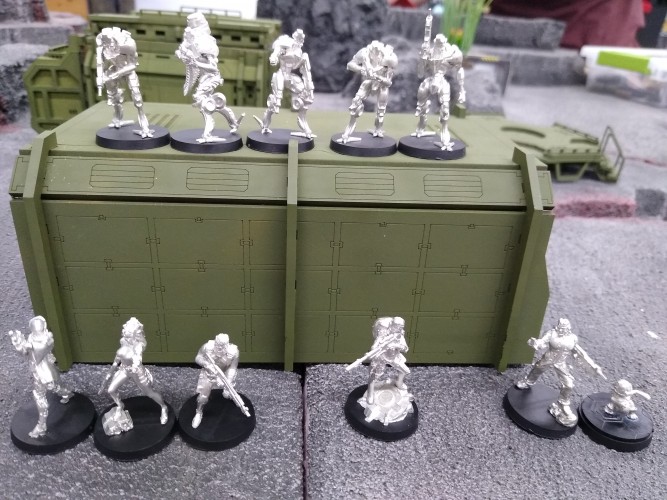 My apologies for the silver horde, but they're robots, so it kind of works, right? 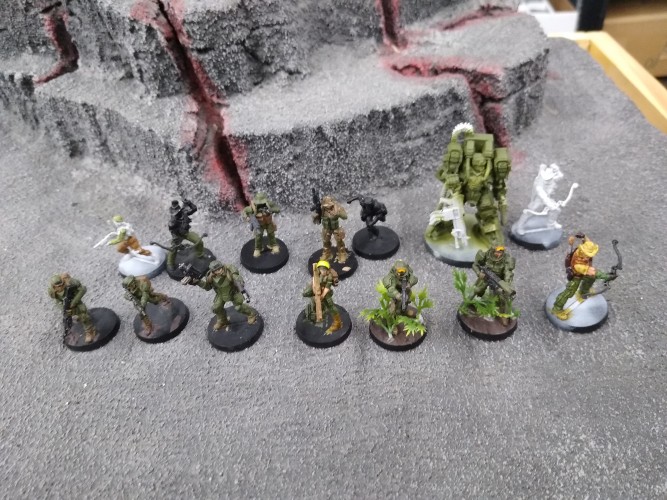 "Hey, Sushi!" I called to the Dakini paramedic nearby "Who's the guy in the Yadu getup, with the machine gun?"

"I am designate Dakini P-231a. Please stop referring to me as Sushi." the lanky remote responded "Body in question is Shukra Axton Penumbrae, standing in for Yadu support with Officer Shakti and Asura Indirah."

"I see." I said "Personnel shortages?"

"Affirmative." Sushi responded, its metallic head swiveling to survey the field "Similarly, Deva Scirocco is standing in for a Sophotect, as none were available for this training exercise."

Before I could say anything more, the commanding voice of Indirah came across the comm. "All ALEPH units, begin exercise in 3..2..1.."

The crackle and pop of gunfire began immediately. You had to hand it to the Ariadnans, for a group of backwater technoregressive luddites, they sure had mastered the skills of camouflage and infiltration. 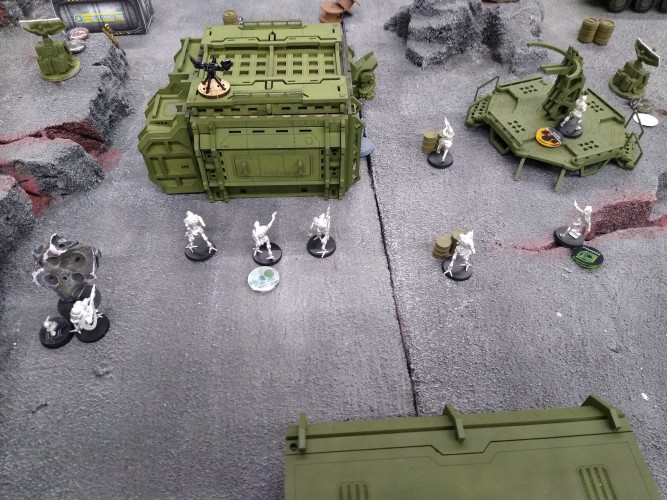 The Dakini began their implacable advance on the left, grabbing the sparse cover available to them on the barren asteroid field, their movements synchronized together so moved in conjunction and looked not unlike a flock of birds.

Shakti, Indirah, and the other "Yadu", whose face I knew I recognized, sprinted towards the comm platform in the center of the field, seeming to not notice the Marauder tucked behind the corner of a nearby building. I had a clear view of the burly Ariadnan from my position near a comms antenna that had been deemed "important" for this exercise.

"Hey, watch out for the-" The thunderous blast of the Marauder's shotgun cut of the rest of my warning. I saw a shower of simulated sparks where the rounds would have hit Shakti's body, and she staggered behind the cover of the barrels she had just reached. Indirah suffered a similar hit, caught in the spray from the shell's initial impact.

Shakti answered back with her Mk.12, the large caliber round punching a hole dead center in the Marauder's chest. Or, at least, it would have, if this had been an actual engagement. The laser targeters in Shakti's weapon registered a hit on the target, and the augmented reality displays of everybody who was watching displayed a spray of virtual blood from the approximate location of the hit. The dummy round caused the Marauder to stagger, but he stood his ground, and racked another round into the chamber of his shotgun. 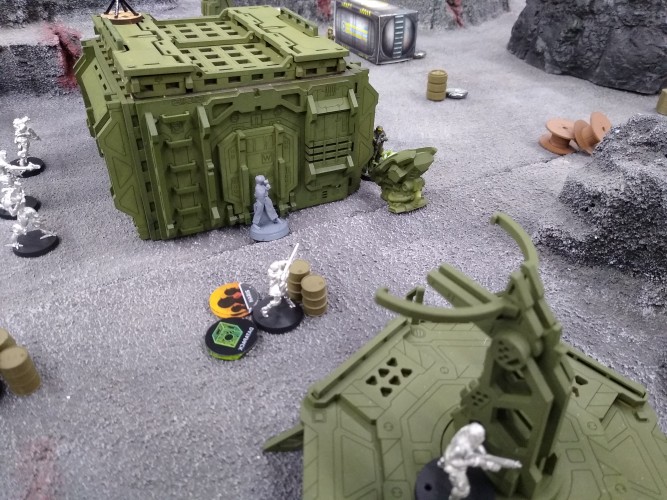 The Marauder fired again, and Shakti went down, her vitals flatlining on my head-up display. All simulated, of course, but mood-setting none the less. The "Sophotect" sent their helper bot scurrying around the corner to try to revive Shakti, the that shotgun sounded again, and the Yudbot went down with a spray of sparks and an electronic squeal. 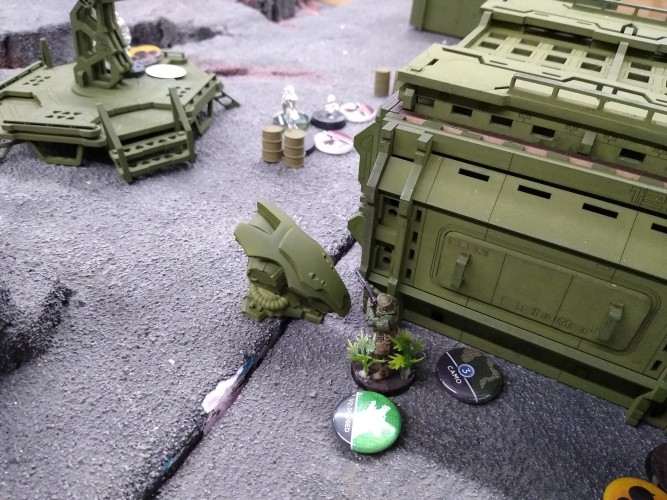 I clicked my vision systems over to see the data traffic on the battlefield, and I could see that Indirah was frantically relaying orders to the Dakini team. I couldn't see them anymore, but I heard the clack of the feet on the rocky surface of the asteroid, and assumed they were advancing again. The rapid pop of a combi-rifle, accompanied by the whoosh of a flamethrower, told me that they had rounded the building and engaged the Marauder team behind the nearby building. The vitals of one of the Dakini flatlined on my HUD, but I was unsure of what, exactly, had happened. 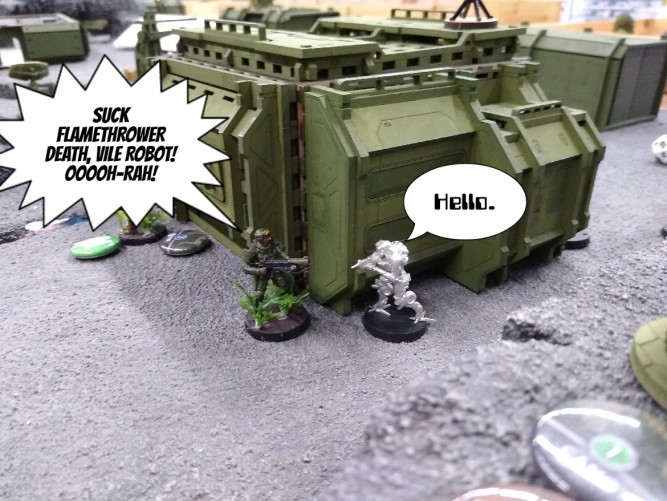 I saw Sushi sprint around the corner and slide into the dirt behind Shakti, at the same time I heard the very distinctive sound of the action on a shotgun being racked. Again.

Clearly, having soulless robots function as our paramedics is the best idea in the universe, because after Sushi jabbed the stimulant pack into Shakti's forehead in a failed attempt to revive her, it realized it's error, and jabbed a second pack into her leg, just as the shotgun roared once more, and Sushi went down in a spray of sparks.

On my HUD, Shakti's vitals came back up, weaker than at the start of the exercise, but I could see her roll behind the barrels, to get away from the shotgun's murderous area of effect.

The remaining Dakini began opening up with their weapons, laying down a withering hail of fire into the advancing Ariadnans, as we tried to regroup. 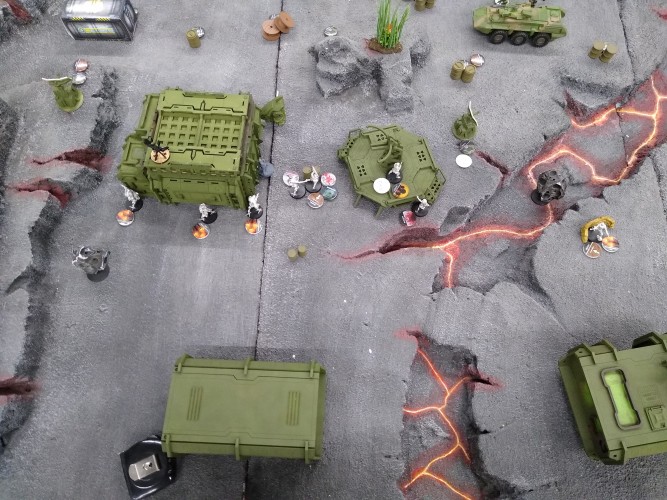 I saw movement up in front of me, a camouflaged body difficult to discern against the grey and dusty background of the asteroid's regolith.

"Movement. Approaching from directly in front." I reported.

I watched the grey blob circle around my position, moving steadily towards Indirah and her team. I held my breath as it got closer, and closer still.

I risked a glance over my shoulder. The blob had made it behind my position, and looped around behind Indirah. In a blur of motion, the blob revealed itself to be a Foxtrot Ranger. I assume these people have names, but I didn't bother to learn them from the mission dossier.

Indirah didn't even look. Her arm just snapped up as the Foxtrot revealed itself and she squeezed the trigger on her MULTI-rifle and planted a pair of shots in the soldiers chest. The Foxtrot dropped like...somebody who had just been shot a lot...and Indirah casually flicked a piece of dust off of her soldier, as if nothing had just happened. 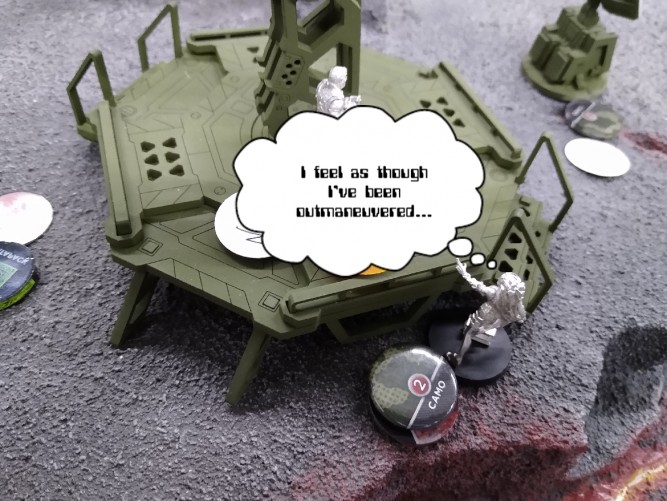 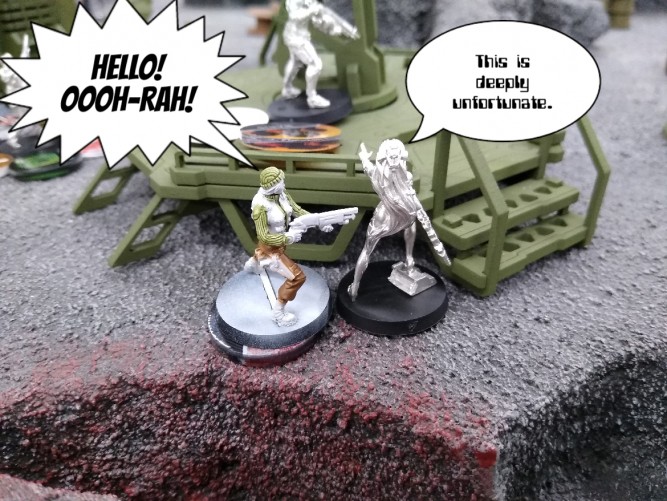 It was a Foxtrot, not Uxia, but it was still pretty bad. I might have forgotten, for the entirety of its movement, that the Asura's MSV3 would have auto-discovered it long before it reached melee range. Oops.

I saw the Dakini exchanging fire with Wild Bill, because robots, shooting at a cowboy, on an asteroid, is just something that happens in my life now. 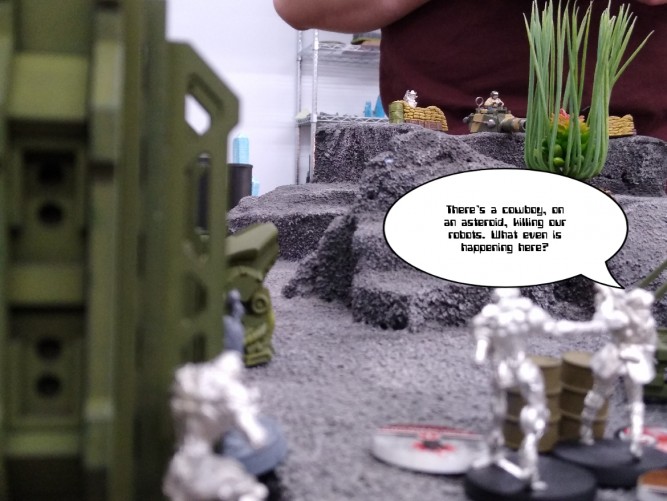 An Ariadnan emerged from hiding behind an abandoned vehicle down field, and sent a round pinging off the "Yadu's" forehead. He went down, and his vitals blinked out, so I'd have to wait until later to ask who he was, and why I recognized him, even though I was one hundred percent sure I had never seen him before in my life.

Indirah spotted an infiltrated...Hardcase?...I believe they're called, sneaking up the field, and highlighted him in all our displays, ruining his camouflaged advance, but she failed to spot the second one maneuvering around the far side of the building held by the Dakini. 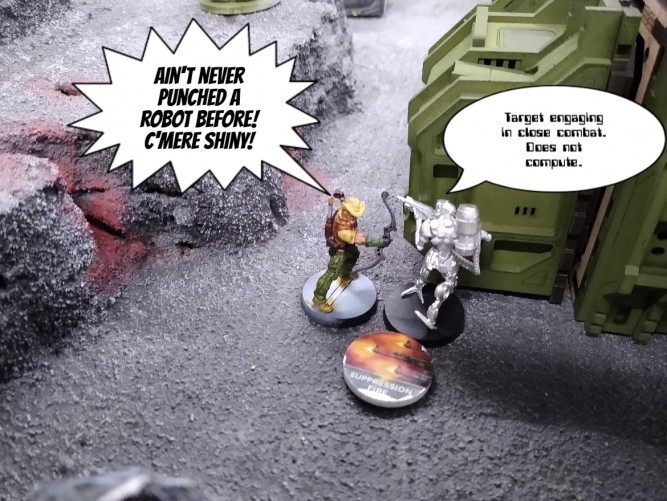 Shakti stood up to get a bead on the myriad of targets firing on her position, and was promptly blinded by the Warcor who was on hand to record the results of the operation.

I figured it was time to do something.

I shifted forward to the base of the antenna nearby, and drew a bead on the Ariadnan advancing on it. The burst from my combi-rifle promptly dropped the soldier, but thoroughly disrupted my camouflage suite, revealing me to the enemy. I used my skills at electronic warfare to override the antenna, gaining control of its data-stream for ALEPH high command, or whoever it was that had deemed these antennae as important to this exercise.

A spray of bullets streaked past my head as I ducked back behind the antenna, and impacted squarely on Indirah, her vitals becoming ragged in my HUD. She was still up, but barely. 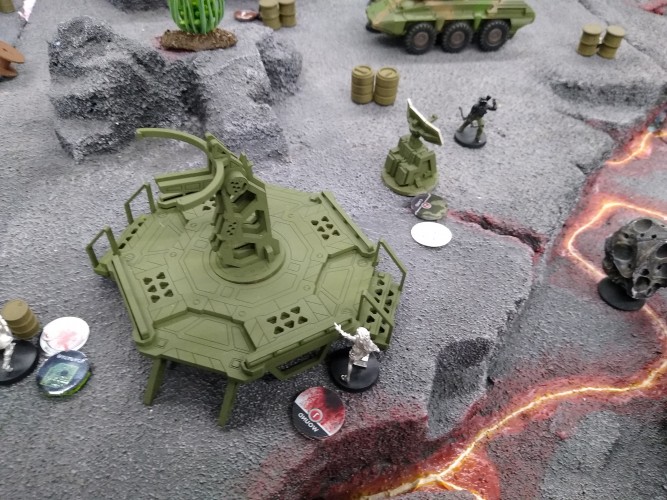 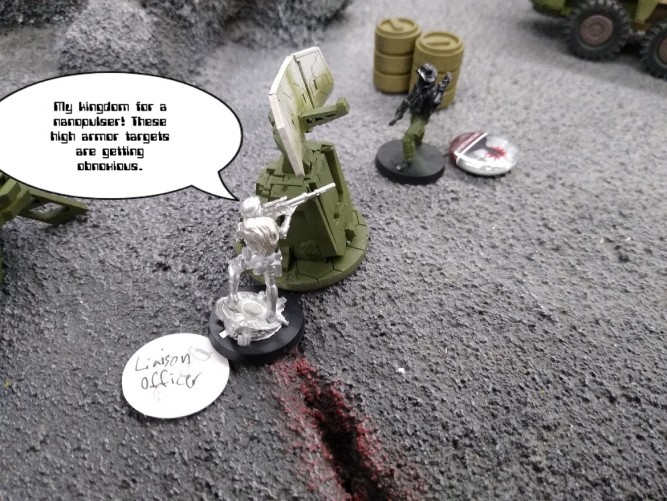 I felt as though we were all forgetting something of vital importance, but I didn't have a chance to think on it more, as another squad of Ariadnan's came running out of the cover of the abandoned vehicle towards my antenna.

I dropped the first one as they advanced, but they were coming too fast, and bathed my position in fire before I could drop the rest of them. The last thing I heard before the training collar jolted me into unconsciousness was the bark of Shakti's Mk.12 dropping whoever had just incinerated me. Perfect timing as always, Shakti. 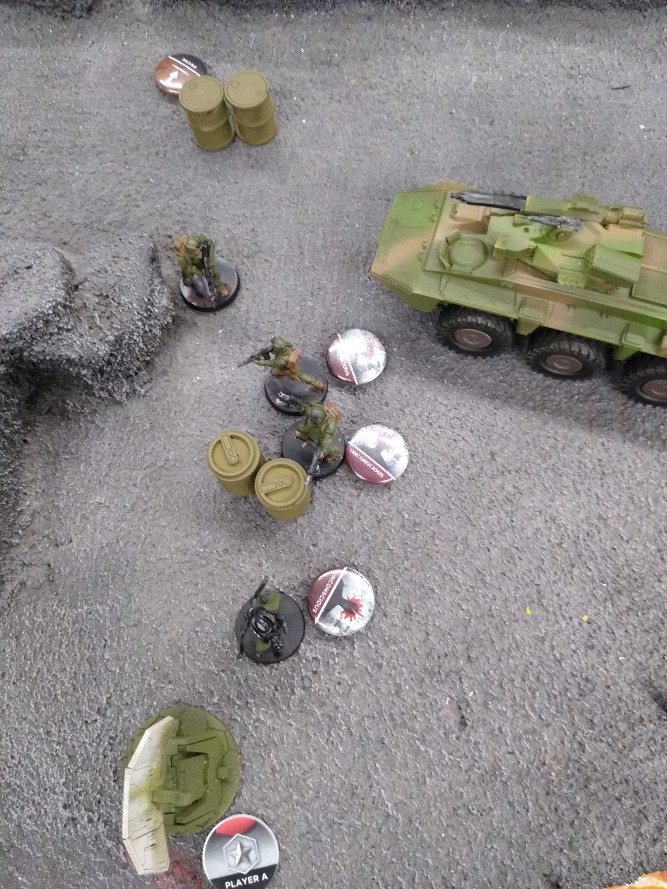 I clicked over into spectator mode.

If I was out of the battle anyway, it wouldn't hurt to watch the rest of the exercise unfold through somebody else's eyes.

Shakti seemed like a good choice, as Yadu tend to have high end augments.

My vision returned, and I was near the center of the field. Only a few seconds had passed. I watched as Shakti lined up the sights of her Mk.12 on Wild Bill and pulled the trigger. The Aristo gunslinger went down in a spray of simulated blood.

She turned her head to survey the area, and was just in time to see the "Sophotect" pop up from behind cover to send a burst of fire into the remaining soldier advancing on the right. The Ariadnan went down, but there was an intense flash of light from the Warcor, and the "Sophotect" was rendered temporarily blind.

I heard Shakti swear through the ears we were sharing.

I still felt as though we were forgetting something of vital importance, and I remember what it was, as soon as the Blackjack that had been hiding on a hill for the whole battle stood up and began raking the remains of our battleline with APHMG fire. It was over pretty quickly after that. Indirah and Shakti went down in seconds, as they were caught out of cover by the heavy weapon, and the last sound on the field was the thud and clank as a Hardcase and the last remaining Dakini traded punches with each other, the Dakini somehow managing to fight the Ariadnan to a standstill. 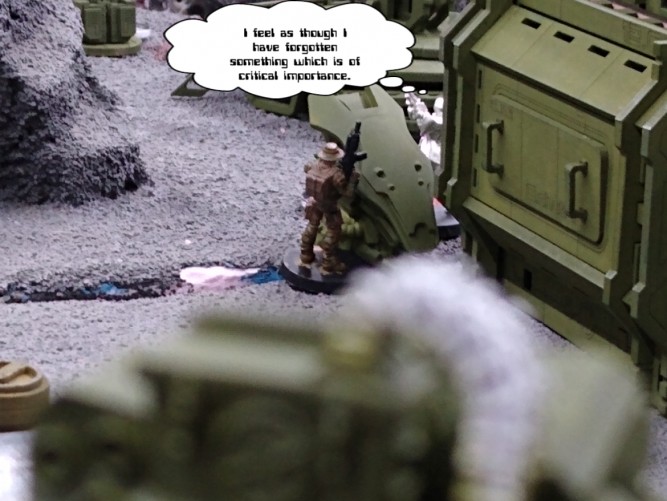 The Ariadnan's had succeeded at repelling an invading force from the Xaraks Battery Field. As the end-of-exercise klaxon sounded, and the downed combatants from both sides began to rise from the dust, Indirah walked over to the Ariadnan commander.

"Congratulations, Commander, you have won the field today." She said, still with an air of superiority, despite being on the losing side.

"Details of this engagement have been relayed to ALEPH high command, and O-12. Your performance has been judged to be...adequate."