So this was my 5th game overall and hardly know what I did, damn I didn’t even know while I was doing it. I’ll take notes for the next game.

My Intruder died to Atalanta’s ARO with the very first action of the turn so I spent the rest of the game hiding from her using Massacre’s Eclipse grenades.
The Bandit took the right flank supplies and stood there to avoid being sniped.
Meanwhile the Moran took the supplies on the left flank hiding inside smoke and ran for my deployment zone. The alguaciles took positions to retaliate against anybody going after my Bandit but I keep forgetting about LOS, silhouettes and stuff so they were mostly looking at the walls.

My opponent’s Thorakitai advanced on the right flank to try and still the supplies from my bandit which eventually died having done nothing. Lupe panzerfausted Nisaide into oblivion on Aro and the was immediately killed by the next Thorakite in line who took the supplies and run. A remote and Andromeda tried to get to the console in the centre but Massacre engaged them.

On my second turn I wasted most of my orders trying to kill Thorakitai with my missile launcher Alguacil who died on Aro doing nothing, deploying my Hellcat who rolled a 19 and ended up in my deployment zone hiding from Atalanta and trying to kill Andromeda with Massacre which he did but costed him several orders and smoking his way into a position to assault Atalanta.

My opponent tried to use his Rebot to get the supplies in the center but got destroyed by Jaguars and consolidated his position on the right flank. Then Diomedes failed his jump roll and landed in front of a Krazykoala that killed him instantly.

On my last turn I tried to kidnap the HVT with my Tomcat engineer who managed to kill Thrasymedes who was protecting it with her flamethrower and tried to engage Atalanta with Massacre only for him to roll a wonderful 8 to her ARO and get killed by a butter knife.

Finally on the last turn Atalanta simply walked and shot killing two jaguars, my Moran holding the supplies and my Tomcat all in one beautiful stroll down hell.

On my last turn I 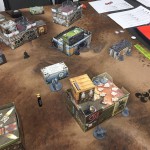 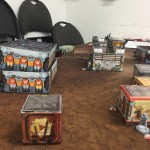 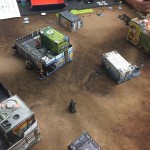