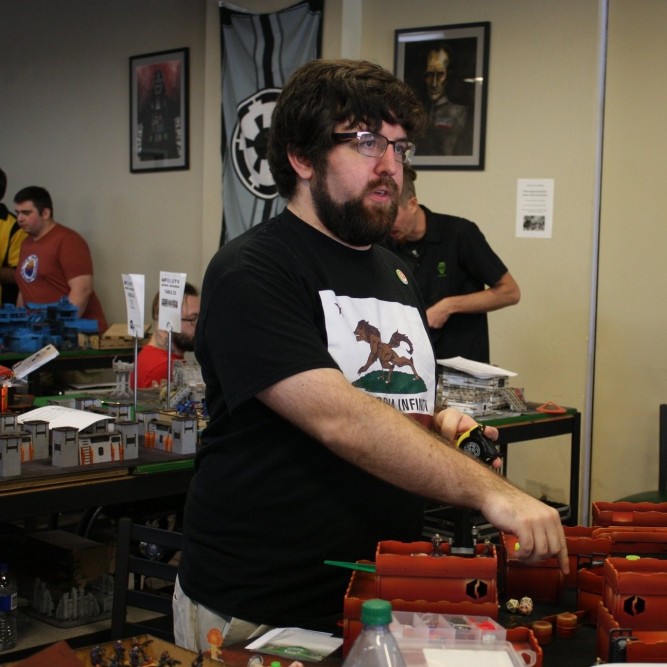 Pictured: me indicating to my opponent, “is it this TR bot you want to shoot at?”

This was my first game of Arizona Armageddon IV, and a Ramah vs Ramah near-mirror-match. Nathaniel and I only had a few units of difference! We were both running a Ghulam attack link, a TR bot, a Monstrucker and a Muhktar Haris. However, I had a Ghulam sniper link to swap to on off-turns, whereas he had a bunch of bots to claim turf and a Khawarij embedded into the attack link as its main shooter. In the roll-off, he elected to go first and I docked him 2 orders.

The first round was a monster bloodbath. He moved his Ghulam+Khawarij link and Muhktars up to contest, then ran his TR bot up and pulverized my lines. He took out my TR bot (spending the extra orders to shoot its body and make SURE it was dead) and made mincemeat of one Ghulam sniper and my big Muhktar gunner, knowing full well the danger of that BS13 Red Fury. However, the Muhktar Boarding Shotgun clipped it with a lucky shot and that was that.

For my half, I forged my Ghulam attack link and marched them aggressively up to his deployment zone, locking down his Muhktar link at range with my HMG. I then ran my remaining Muhktar duo at his Khawarij link in a Doctor Plus suicide dive - one that paid off because 3 Ghilmen were racked up back to back and paired nanopulsers disposed of all three. My Viral Rifle Muhktar settled in on the centerline.

He scored a Classified this turn, I forget which.

For his turn, his remaining Ghulam NCO bought him an advance to get the Muhktar Haris out of trouble and push them up to straddle the near and center zones. He dropped a Nahab on my Ghulam attack link and - snicker-snack- there go all but Leila Sharif and the Ghulam HMG. Against all odds, the HMG crit on 5s when he tried to finish me off, then fended off 2rounds of smoke shooting from his Muhktars!

For my turn, my viral Muhktar disposed of Leila Sharif, and my unlinked HMG clipped his Muhktar Red Fury and slaughtered some bots before falling back to the near zone. I had:

With scant few orders remaining, Nathaniel lost his Ghulam to my Viral Rifle but successfully slew it with his Khawarij. On my turn, with no targets, I ended the game for a 5-5 tie, near-far to mid.

I think I played this the right way. With his Khawarij and remaining Mukhtar Nathaniel could edge me out of his near zone, but then he wouldn’t have had the chance to unseat me from the center with his Khawarij and would have lost. I also didn’t have the bandwidth to move my Ghilmen back to the center to contest him. We both played it right. 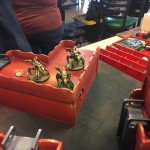 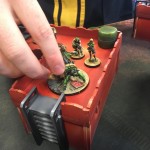 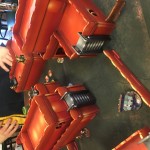 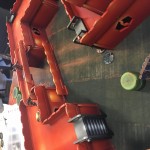