Small game with a scouting force of Khaars Corsairs, an Irregular QK Group of Pirates, Mercs and other Vermin.
The Mission was to infiltrate a remote Hangar on Novy Bangkok, that was occupied by Yu Jing forces also baring any authorization. The Corsairs were to establish a foothold in order to facilitate further missions on the Rock. - Narrative starts below this summary.

Game was quite swingy, my opponent, a rather unexperienced player surprised me with his thoughtful tactics, which gave him 3 Operation Points in the End.
After having secured three Consoles by Round 3 dominating three Sectors and Securing the HVT I took victory at last.

The freight shuttle slowly slid through the blast doors of the tiny Docking bay. The dark and blasted asteroid surface of outer Novy Bangkok made way for a pristine white room of plastic and metal. The contrast hurting the eye for a split second before visual dampeners kicked in. The Saîf, a short distance freighter owned by private contractors, seemed to defile his pure surroundings, not only because of his name, but of his black hull with orange markings. As the hangar was pressurized, the thick and stale air of the ships own oxidation device was slowly replaced. Only it was not the fresh air of a terraformed or earthlike planet that filled the crews nostrils, but a sterile, slightly metallic smell that somehow left the metallic taste of blood on the tongue while breathed in. ‘A sign of things to come? Hopefully not!‘ Com. Halifa, Third in Command of Khaars Corsairs, thought to herself.Noise rose from behind her, as her team made themselves ready. Gun chambers were checked, armor plates sealed, Mags slammed in. „Commander the authorities are repeadetly requesting authorization, I believe their patience runs out,“ the pilot reported. „Keep radio silence and open the hatch,“ Halifa ordered and turned to her team. She looked into their faces, not knowing if she would see their faces again after this mission. „By the prohpet we raise our hands, brothers and sisters. For too long have the hyperpowers kept their riches for themselves, we will liberate them from their burden.“ Laughter rose from the crew. „Our mission is to secure this Hangar. It will serve us as a beachhead for the coming operation and establish a foothold for the Corsairs on this rock“ – „CORSAIRS“ shouted the team. Halifa continued: „Yu Jing authorities are probably not amused by our presence, so be careful. Secure the area and lock them out of the systems. Let’s go! My the lord bless our hands. She walked to the hatch, carressed the Kalligraphy near the door and made the jump to the deck. Her Team followed their leader. 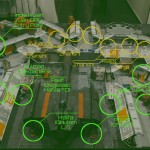 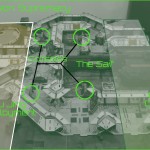 The Group quickly spread out. While the Ghulams secured the rear of the ship, the more aggressive members (and Decoys) took a forward position. L1ZT an androgynous Al’Hawwa tapped into the network and mapped the movement of the Yu Jing security forces. Light and Heavy Infantry, and something else..... A Claxxon rang, followed by the voice of a Hsien Warrior: „Trespassers, stand down and submit to our authority, violators will be shot on sight. You have 10 seconds to comply.“ Half of the Hangar bay was in their hands and they had already started the network shutdown. It was time for their distraction. 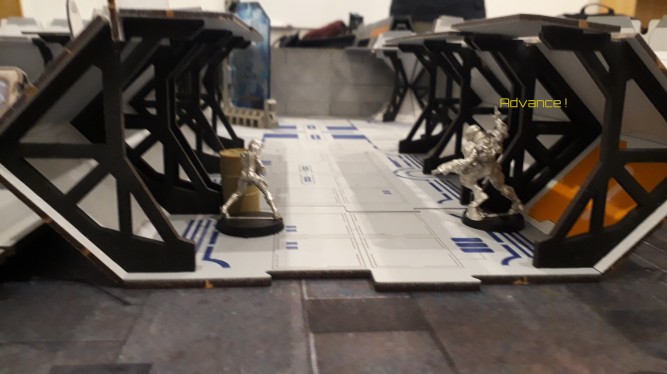 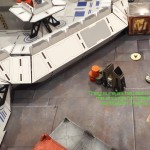 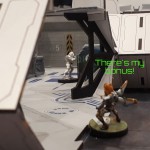 Drifting through the void, India looked at her newly aquired armor plates. Given the amount of space crap floating around her, it had been well worth the purchase. Well, alright it was more of a loot than a purchase, but that bolt did not use his armor anyway. She tapped the controls on her jetpack, bringing her closer to her target, a heat sink in an old mining shaft. As the situation control switched to green light, her boosters ignited and send her right through a containment field, into the hangar area. Artifical gravity grapped onto her, and but as a masterful Yuan, she simply redirected the boosters and landed smoothly between the surrounding cargo. Commander Halifa contacted her near immediatly: „It is time for your distraction, take them out, fast and effectively and you get 25% bonus.“ ‚As if the Commander even had to say that‘, India thought. Unlocking the Chain Rifle, she swung around the corner. The Zhanshi took the load directly to his back, flinching a split second to late. „Distraction deployed, Resistance taken care of“, India reported.

The Corsairs began moving, just as Sulman, an associated Sekban wanted to move around the corner, he was hailed by bullets. His armor deflected the shots, but he surely did not want to engage the enemy. A Zuyong had taken position on the other side of the corridor and guarded the door. Warily that guy did not want to open the door either, as the FFID showed a Janissary with HMG on the other side. L1ZT however felt the air getting thinner, the invisible blimp on his log closed in, as did the Hsien, his ten seconds seemed to be over. Sweat began to form under his mask, he had an metallic taste on his tongue. If that Hsien would get sight of him, he was done for. „I could use a little help down here,“ L1ZT whispered. The bellowing of a heavy machine gun was the answer, as Bajir swung around the corner and opened fire on the brave Hsien warrior. Not expecting such resistance, the Imperial Agent was taken by surprise and swiftly fell to the ground. The Janissary nodded towards the Al’Hawwa, while retreating back behind the Hangar door. 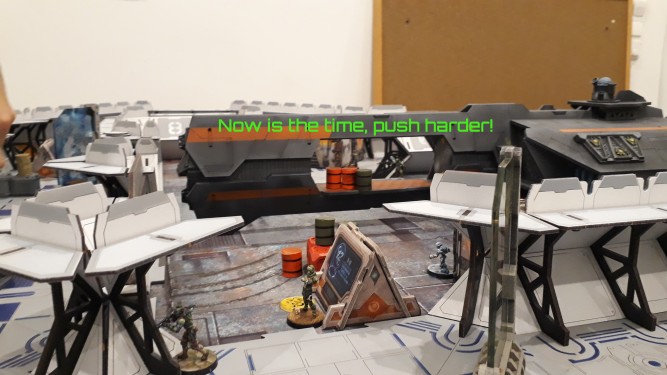 Meanwhile India was busy dodging bullets. The Zuyong had spotted his Zhanshi comrades demise and began shooting down the hallway. However she dropped a smoke grenade and charged through. Her Chain Rifle belched shrapnell at the Soldier, but he did not even flinch. „I am coming to your assistance“ signaled Commander Halifa as she moved towards front of the bay, „Asaf, L1ZT, lock Yu Jing out of the network, let them go blind.“ The Hafza on the Hangar side of the door dropped his Janissary disguise and walked towards the door. „The network!“ Halifa shouted. the Hafza stood there perplexed, somehow not figuring what to do.
The tides however were turning to favour the Corsairs. The Yu Jing forces however seemed to be in a bit of disarray. Their strategy did not add up, and losing their High Ranking officer did not help either. Their initial pressure on the intruders vanished. On Sulmans notion India threw a smoke grenade across the room, weathering the bullets of both the Zuyong and the Zhanshi that had come up behind his officer. „Red Button,“ L1ZT radioed Hafza Asif with a slight chuckle. Asaf looked at the console and pressed the giant appearing red button on his hub. With a Shalmei-sound the console reported that all requests had to be formulated in arabic using Sures of the Quoran... He noted this as an success and joined Sulmans push towards the front. As did Bajir and their Doctor Dar on the other flank. The Security forces resolve faltered. India saw her chance and charged at the Zuyong, her Sword met the Carpace armor, and was gripped by the iron hand of the Terracotta Soldier. „Enough of this,“ he spoke in arabic with a thick caucasian accent, „we will retrieve our wounded and leave. Be aware, you might have stung into a hornets nest.“ With these words he threw the sword back, turned around and left. His remaining soldiers followed, after picking up the unconcious bodies of their comrades.

„That was strange“ Sulman said. India nodded in acknowledgement, Asaf scratched his head. „Allah’s light has shown upon us, let us not spoil his gift for the moment, Commander Halifa spoke to the group. L1ZT notified her of a reported accident and temporary shutdown of their hangar bay given out by Novy Bangkok Administration. For the next 5 weeks the Bay could not be used by military or civilian personal. All the time they needed for their own little enterprise.