Major Alieze Etesiae, the Little Fox, commanding officer of the 8 Working Angel Orbital CRRRC and small and grumpy platinum blond (whenever she forgets to dye her hair) was in her office deep within the Nomad ship The Times They Are A Purple. A stack of reports were set before her desk, though they had mostly been doodled with little cartoon depictions of Rainbow Riot. She was ostensibly trying to tackle one of the reports, but her drooping head was a clear indication that the report was winning.

Suddenly the red bakelite telephone the crew had installed in her office as a joke began to ring. Alieze started, toppling off her chair and muttering, as she picked up the receiver. "8 Working Angels CRRRC, Major Etesiae speaking, this better be damnned good," she said.

"Uh-huh, alri--what the fucking hell? What do you mean I have to go find a pony? I thought we had a requisition request going through O-12 right now? Didn't they say they still had one stabled? What's that? They've gone and deputized it??" She groaned and planted her free hand over her face.

"Alright, fine, I'll go dig around for a bloody pony." 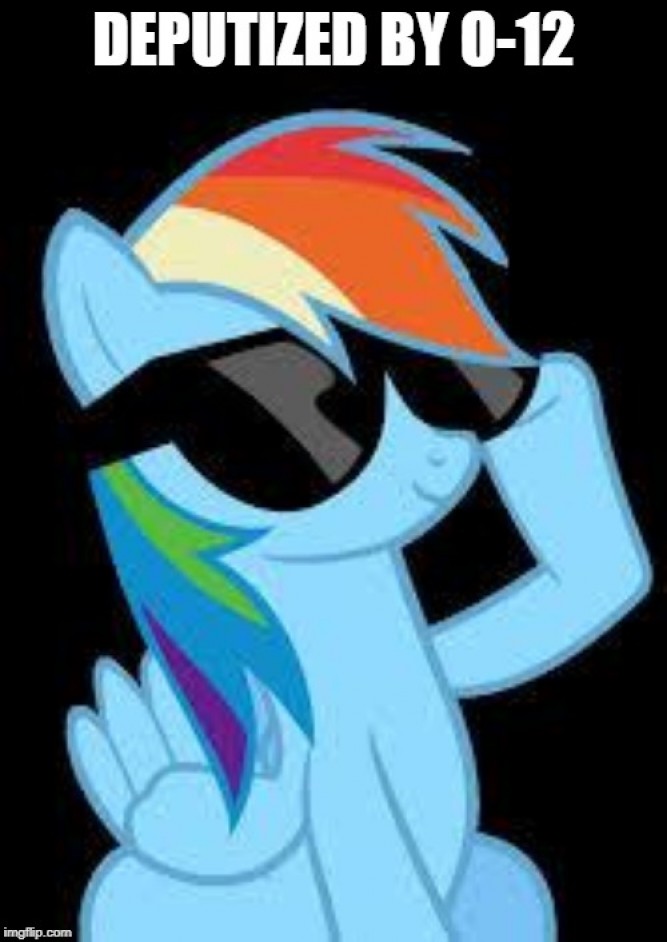 The real reason our requisition request got denied. :(

Deployment Notes
-Nomads win the Lt. roll and opts to go first turn.
-An attempt to be clever backfires horribly as my second Moran fails their infiltration roll
-Both Tohaa and Nomad units were clustered close to the armory with a lot of firing blocked off by the devil that is commercialization (damned billboards clogging up the place). 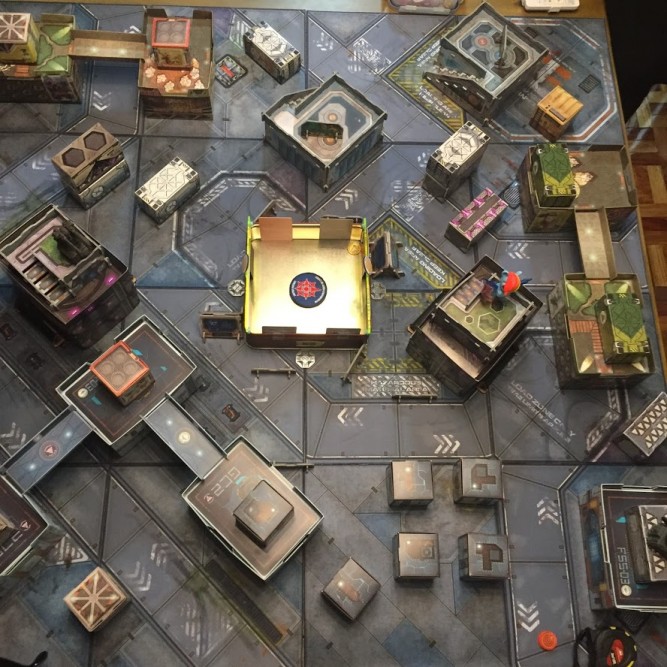 Aerial reconnaissance of the battlefield 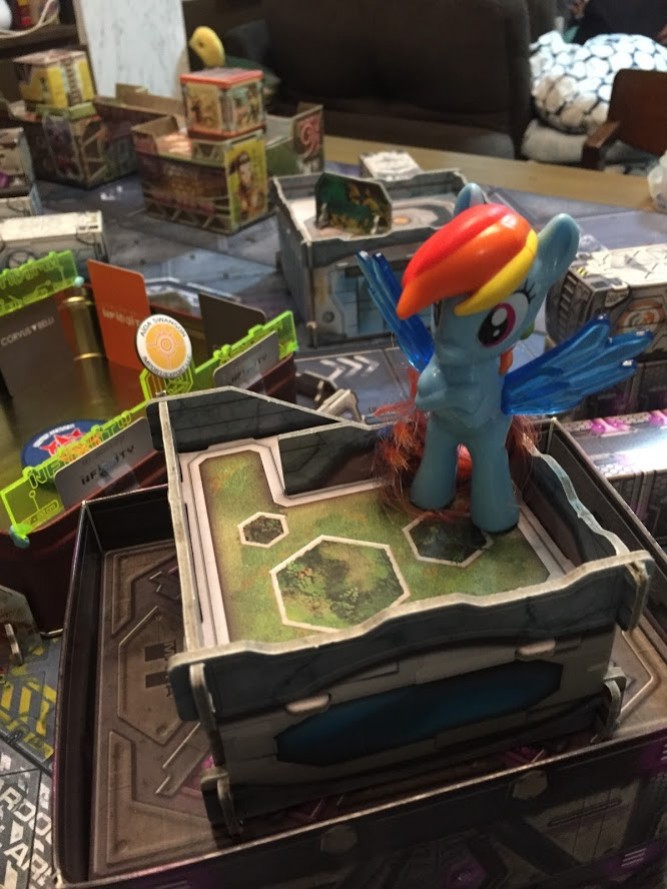 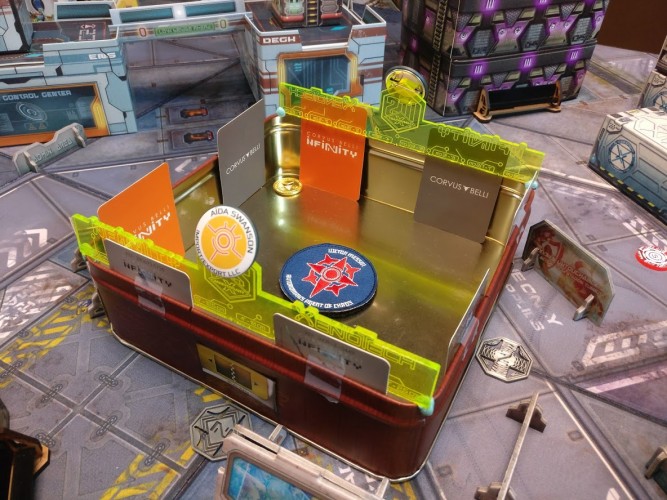 The armory. Novvy Bangkok should maybe vet their suppliers better. 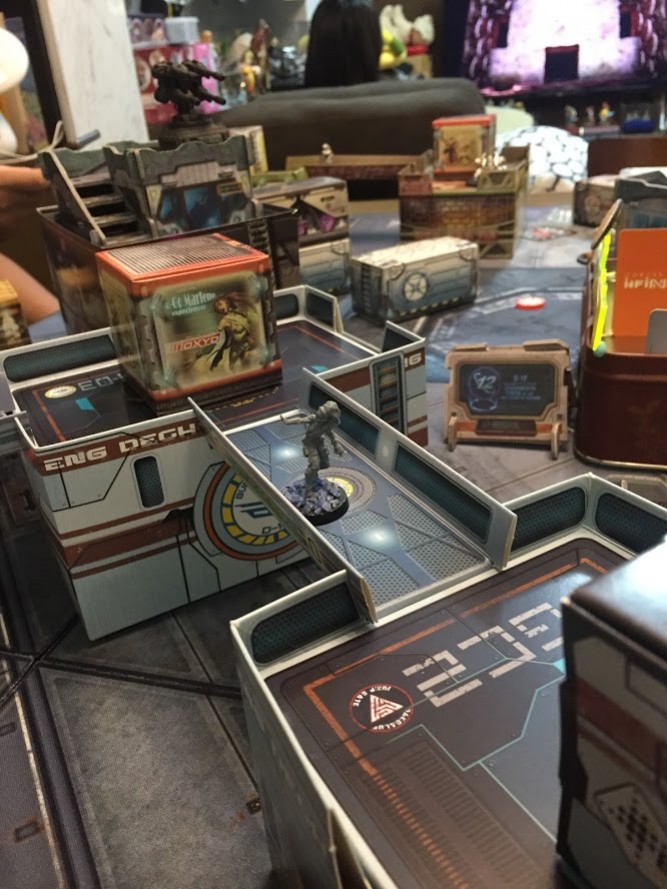 Alamat trying to be clever by infiltrating into the opponent's side of the battlefield... 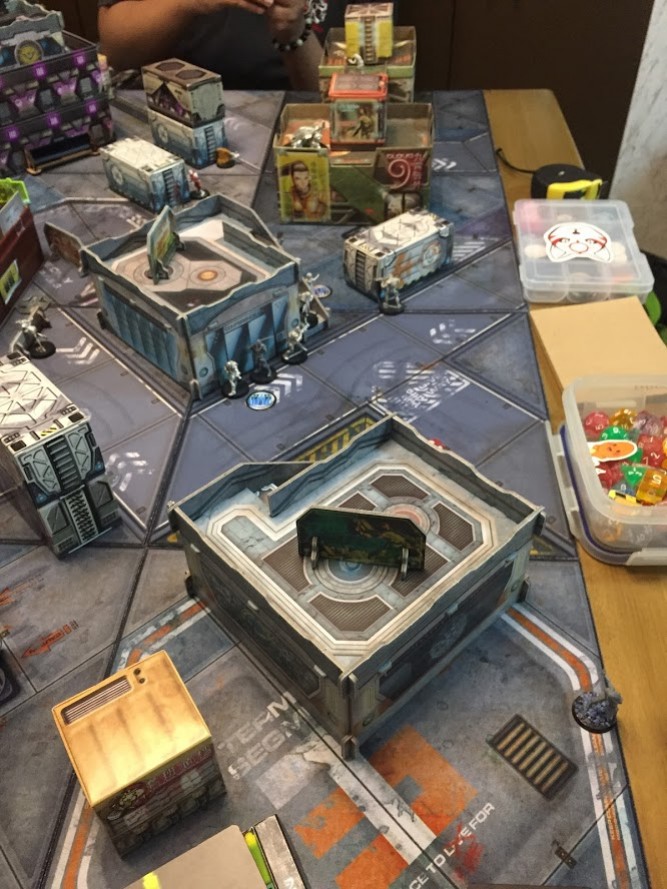 "That's a copy," Alieze replied. "Send your squad in to secure that damned Pony. We'll kip on over to the secondary objective for a little retail therapy. "That's your cue, Sav, and please remind Massacre to enter in an orderly line and not jostle everyone this time." Alieze sighed. They'd been scouring Novvy Bangkok for signs of a pony until they received intelligence from the Brown Nose's ocelot that Ariadna were employing such beasts to carry ammunition in the Xaraks Battery.

They had finally found their pony, now if only there weren't so many weapons lying around this armory tempting an honest Nomad, she thought. I mean, if they didn't want us to take it, they should've nailed it down to the floor, right?

"Alright, folks, you heard the boss lady. Line up, take as much as you can reasonably carry and then leave in an orderly manner. Here we go in 3..." Savannah said, as he counted down and then opened the gates to the armory. All four massive doors lowered to reveal a very surprised Tohaa patrol on the other side, who then began to brandish weapons. "Well, shit, we have Artichokes! Massacre, I need cover here!" Savannah shouted.

"I hope you like pineapples!" Massacre shouted, as he threw an eclipse grenade into the armory. "Alright, rave in the armory! Don't worry Brian, we'll make sure you have reason not to come home to the missus tonight!"

"Whoo!" the Jaguars replied as they piled into the armory.

"You're up, Burn!" Sav shouted to the Intruder, who rushed into the armory heedless of the eclipse's effect on her MSV2, as she unleashed a gout of flame into the Tohaa.

Please enter the armory in an orderly queue. 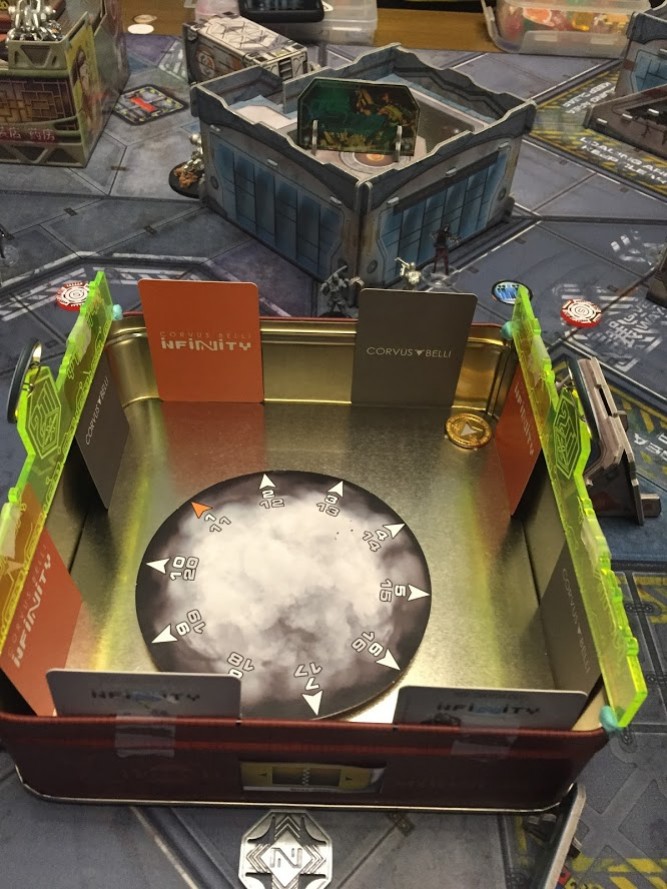 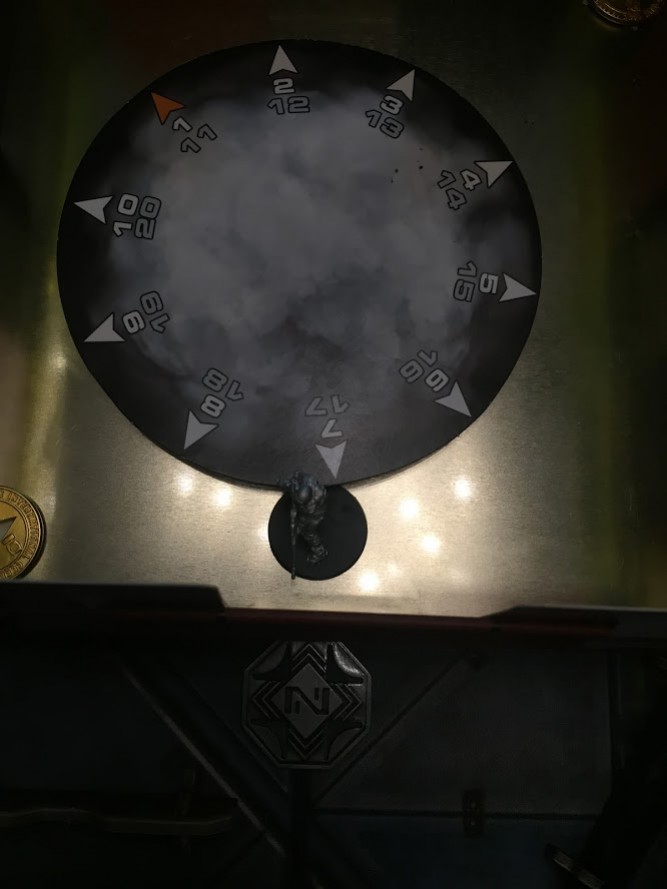 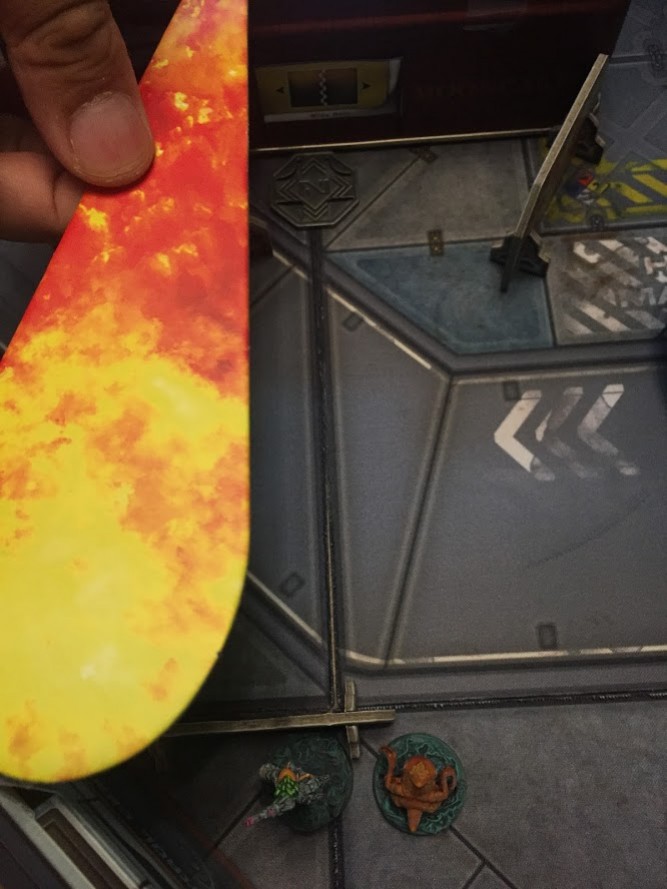 -Nomads walk into the armory and open it up.
-Senor Massacre and his Haris manage to get an eclipse grenade into the armory.
-Intruder enters the eclipse and uses intuitive attack with his light flamethrower to engage the Gao-Rael so neither can benefit from their MSV2. The Gao-Rael takes a wound but manages to duck prone into cover right after. The Intruder reenters camo right after.
-Not pictured, my Bandit in Group 2 situated at the right flank moves towards the enemy HVT's right flank and my Bandit in Group 1 situated at the left flank casually walks to the stairs of a building to block the Tohaa impersonation marker's means of egress.

Rave in the armory!

"It's the fuzz!" Burn shouted, as she manned the gate. She cursed as the light of a scanner from a Chaksa pinpointed her location. She raised her flamethrower against one of the onrushing Tohaa, who managed to spray Burn with their SMG just before being consumed by the flames.

"We don't have time to worry about that. We got incoming on the west gate," Ravager shouted, as he fired with his chain rifle. "I got one," Ravager exulted, only to be stopped short as he was taken down by a Kriigel.

Things were devolving fast and Brian tried to throw smoke, but was taken down before he could even activate the grenade.

"No!" Massacre shouted, a trio of eclipse grenades goes off, blocking his line of sight. He heard the familiar chirps of Savannah's koalas activating and two explosions telling him that at least one of his enemies had been taken out. He raised his close combat weapons, and scowled as two figures emerged from the covering smoke. A Makaul and an Ectros tried to flank him, but he jumped on top of the Makaul, howling incoherently in rage while declaring himself the Aristeia! champion of the Xaraks Battery. The Makaul went down, but the Ectros remained locked in deadly combat with Senor Massacre.

Outside Savannah was cursing up a storm. He was about to rush into the armory only to catch movement in the corner of his eye and dodge, just as a Kiiutan tried to ambush him from its hiding spot. "Infiltrator!" Sav called out. "I'm pinned." 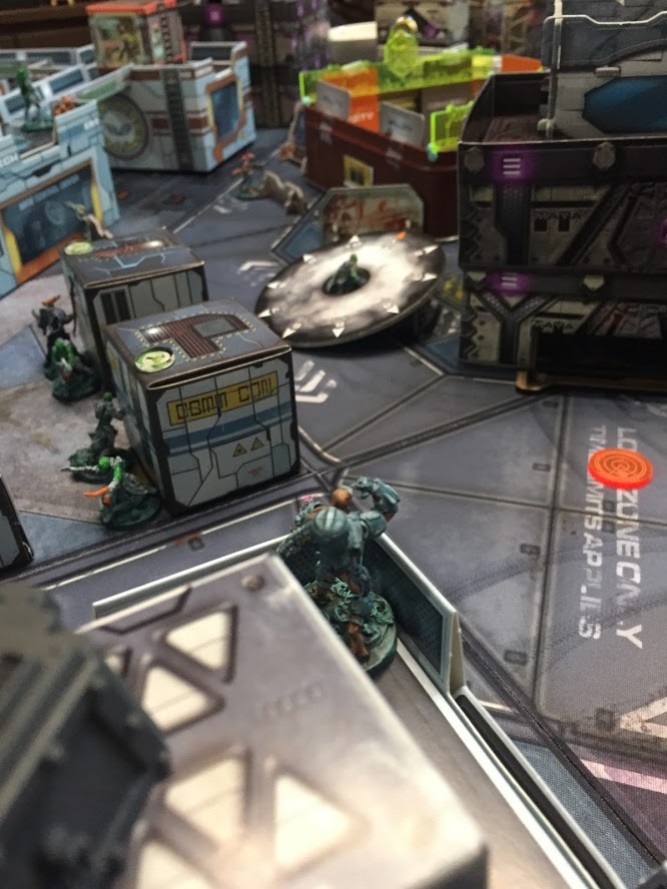 Infiltrator on the roof!

Well someone's about to have a bad day.

Altercation in the Armory soon on pay per view!

Bottom of 1
-Einhorn spends two orders to reveal the Intruder and a further order to take it out, only to lose the attacking Draal as well.
-Sustained attacks from the Tohaa succeed in killing the Jaguars but not without casualties.
-The wounded Gao-Rael suicides into the armory to take out the koalas so the Ectros and the Makaul can engage massacre. Despite the second burst, Massacre manages to knock out the Makaul but subsequently gets isolated by Tohaa biohacking shenanigans.
-The Kiiutan tries to take a potshot at the Moran who manages to survive.

End of Turn 1
-With Senor Massacre and the Ectros the only ones left standing in the armory, the Ectros takes control by weight of points.

"We need control of that armory, Dizzy," Alieze shouted ordered. "Don't worry about Sav, I've got him. Just push forward."

"Same to you," the Bandit replied, as she raced up the stairs to the rooftop where the Kiiutan had holed up. She spun out into the open, and fired her shotgun from the hip. The shots flew wide and Alieze cursed as she ducked back into cover in preparation for the extended duel.

"Move forward," Dizzy called out, as she sent the REMs racing forward, hoping that the weaponry they carried were enough to carry the day. The Tohaa responded with withering fire, and soon both REMs had disappeared from her command display. Still, she tried to press on, hoping to reinforce Massacre but without the heavy support there was nothing they could do but pull back.

Meanwhile Massacre was shit talking the Ectros, psyching it up before pouncing only to trip and faceplant onto the heavy infantry's armor. A surprising upset in the armory--the contender takes down the champ!

"I'm here, let's get this Rave started, whoo!" Fugu called out, as he entered the zone of operations. "Guys? Hello?" frowned, his calls ignored amidst the chaos of gunfire.

Alieze emerged from the building with her shotgun slung over her shoulders. "Sitrep?" she called out.

"Dizzy here, we can't get to Massacre. There's just too many of them. We're pulling back now."

"Fugu reporting--where the hell is everybody?"

Alieze groaned. "Do we have any good news at all?" she demanded.

"This is the recon team; we got the pony!"

"Huh," she muttered. "Alright, I'll take it. This is Major Etesiae to all units; head to extraction point OMGWTF OW. We're quitting the field." 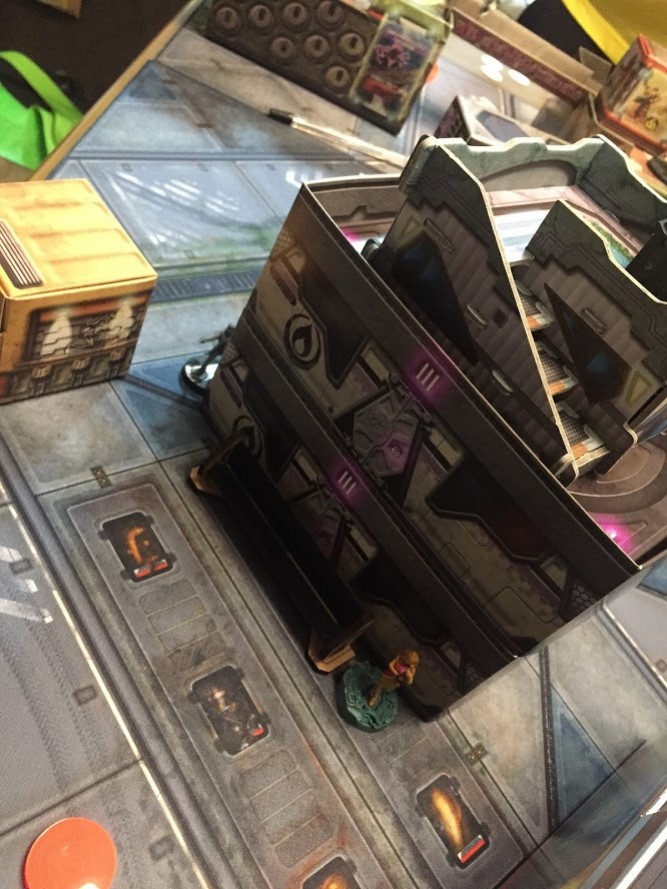 The Bandit Kid fails to tag the HVT. 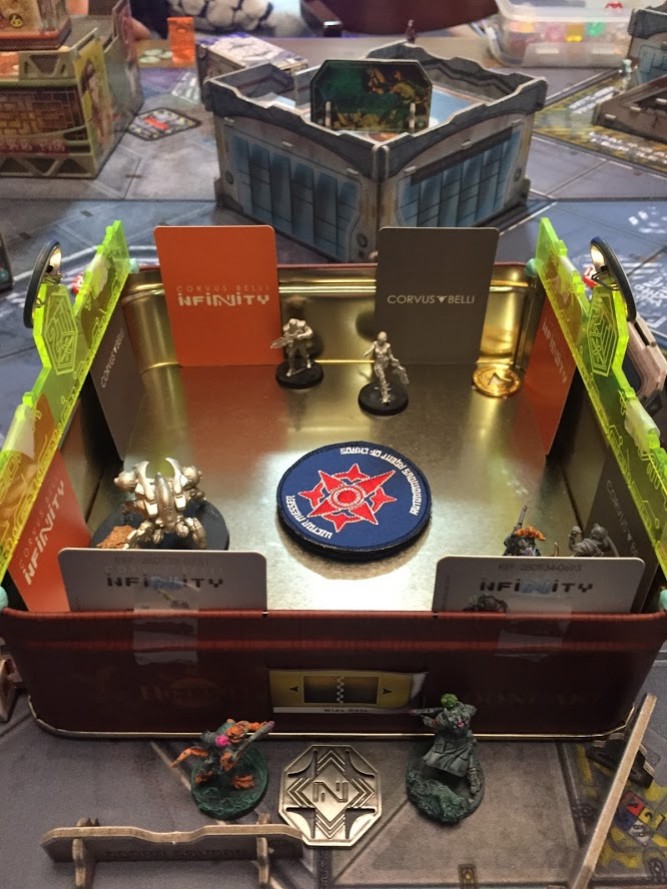 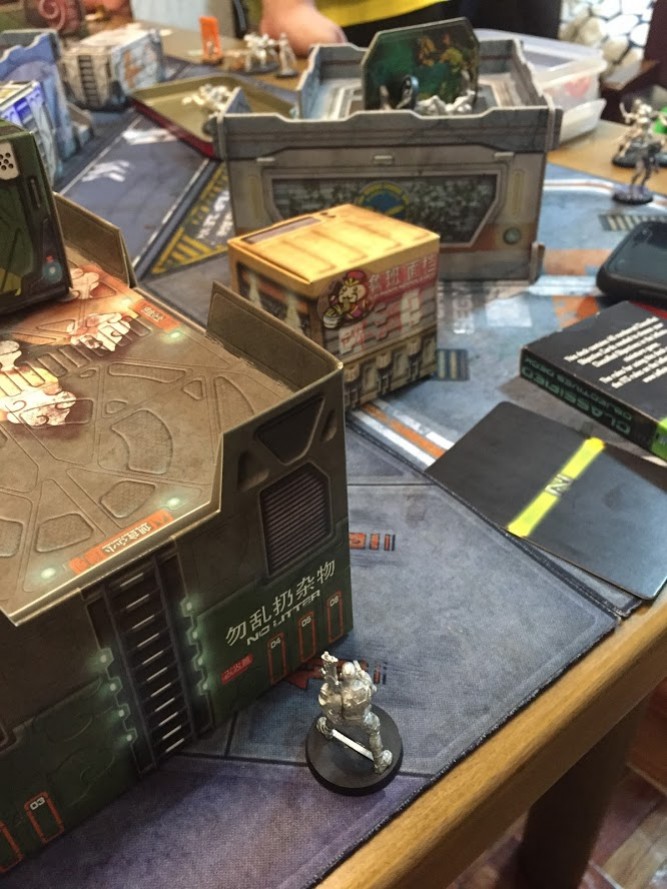 Making off with the pony!

Top of 2
-Group 1 Bandit moves into take out the Kiiutan
-Group 2 Bandit tries to hit the HVT with spotlight twice for a classified objective and manages to pull it off only once.
-The link team gets torn to shreds rushing towards the armory, losing both Tsyklons.
-Massacres tries to damage the Ectros but misses.
-Tomcat gets walked in for the third turn extra order.

-Massacre gets taken out by the Ectros.
-The other Tohaa wipe out the Alguacils.
-They then proceed to take an item from one of the panoplies.
-Faced with loss of lieutenant and with no way to push the Tohaa out of the armory, the Nomads concede the game.

Stay tuned for Part 2: Nomads vs Haqqislam at the Gorge. For Pony!