“The Colonel will see you Now, Lieutenant Tupilova.” Said the grizzled major, opening the door to the colonel’s office and beckoning her in.
Tupilova peered through door into an smoke filled room. Biting her lip she walked through the door and saluted, silently hoping this wouldn't be the end of her career.
The colonel returned her salute from his desk, and then sat back in the chair and put his feet on the desk. He drew a cigarette from the packet on his desk, struck a light and inhaled. He gestured towards a bottle of Oktan on the corner of his desk, indicating that she was to pour two glasses. After exhaling, he took his feat off the desk and leaned forward taking up the glass in his left hand. He rose it just above his lips and muttered “Na Zdrorovie,” downing the liquid in one gulp. Tupilova did likewise.
Returning his gaze back to the lieutenant, he motioned to her to sit in the chair facing him. A cruel smile crossed his lips. Tupilova felt the vodka rising back up from her stomach. She knew she would likely fare worse in the office of this colonel than her squad had on the strip a little less than 8 ago.
The Colonel fixed her with a gaze as cold as midwinter in Rodina. A look of pure contempt spread across his face: “Now Lieutenant, care to tell me what the fuck happened!”
Tupilova sank deeper into her chair and began speaking. “Well, Sir, it all started as soon as we got to the Strip. As you know, our unit draws troops from across Ariadna, but we were joined by the most intriguing man.”
“Intriguing? Do go on Lieutenant,” the colonel's face becoming more interested. “but you'd better make it good. Your career depends on it.”
“As I was saying, Sir, a most intriguing man, who carried two pistols, several decks of cards, and shot better drunk than sober” …
×××× 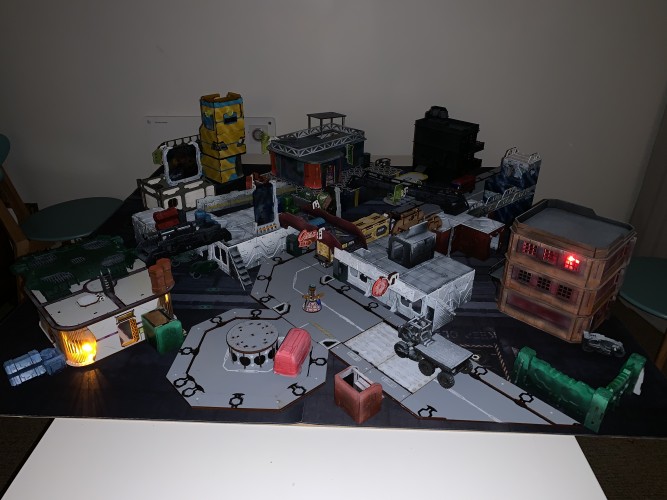 The Strip as the night cycle begins 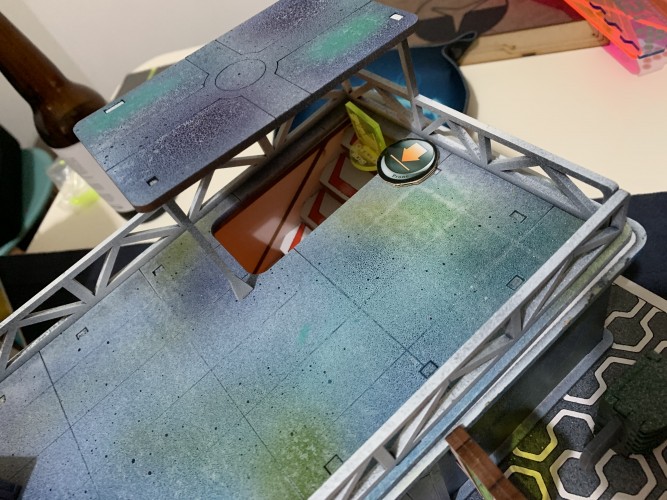 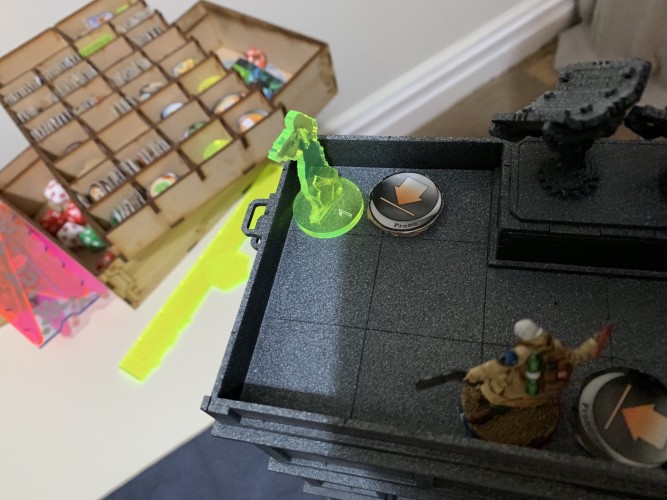 Tank hunter with autocannon and 112 take the high position 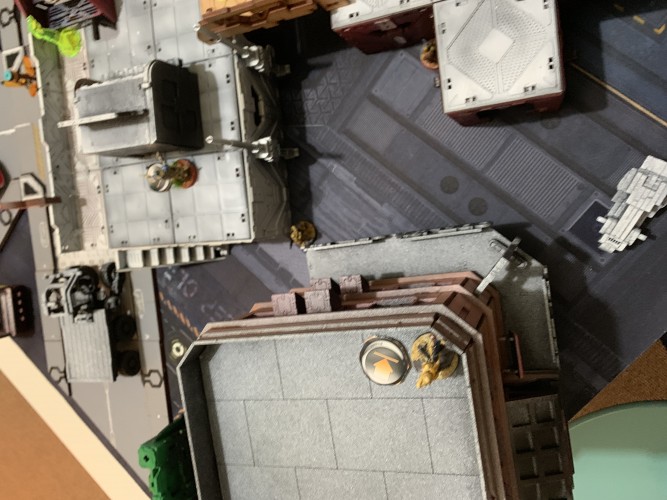 Lt Tupilova bravely commands the team from the safety of the top of a 3-story building. She would stay there all game.

Top of turn 1: my opponent goes first and spends most of his orders securing 2 boxes and moving up up his Yan Huo with HRMC and Wild Bill. 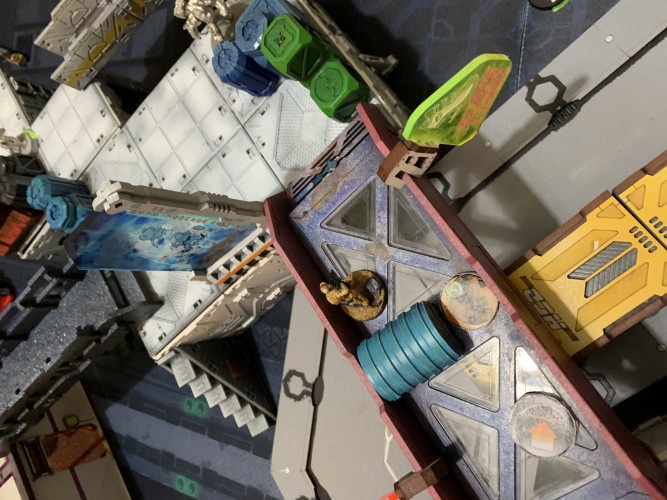 Ariadna begins counter attack. Chasseur mines And traded for Wild Bill and I think puts a wound on the Yan Huo. 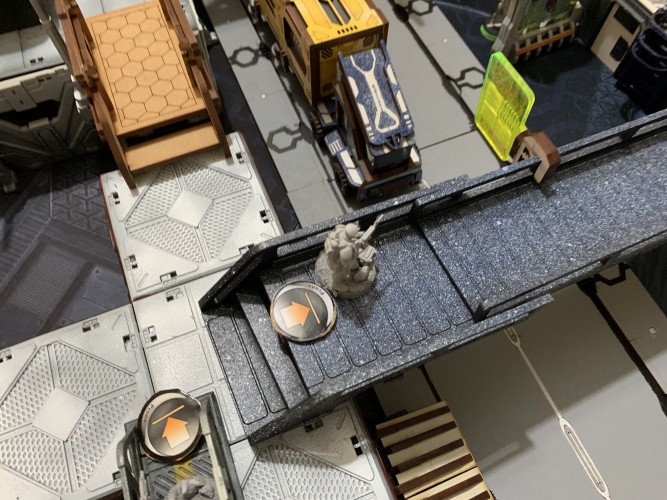 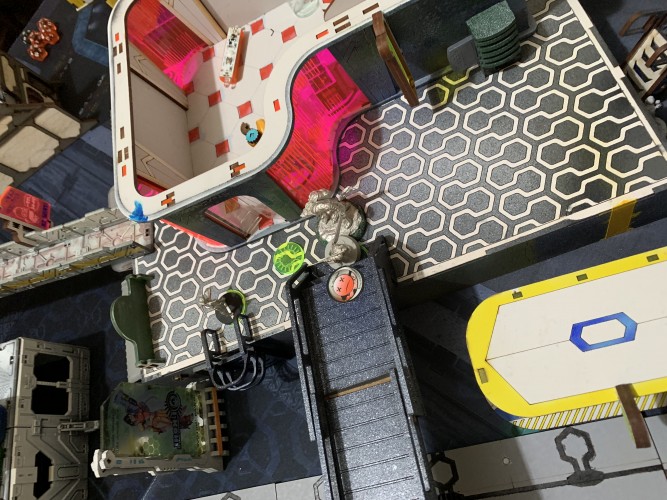 Duroc lands in the only safe space and ends up in base to base with a Monk. He puts him down in the top of turn 2 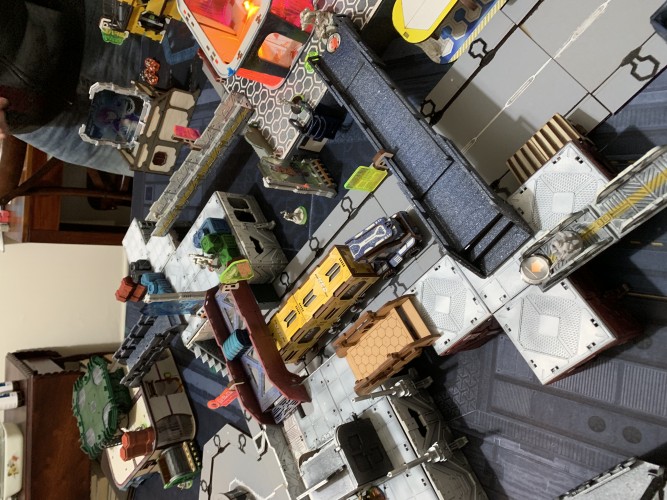 Tankhunter trues and fails to down the Yan Huo, who doges probe out of LoF. He sends Major Lunar unconscious but can’t kill her.

Top of turn 2: my opponent runs in additional monks towards Duroc and puts a wound on him. Other notable events were a tiger soldier paramedic deviating from his flight path into my lines. She survived the landing but was taken out on her next order by a long range light shotgun crit. I can’t remember much else happening other than the Yuan Huo getting up and returning to suppressive fire and Uxia dying to a fishman. 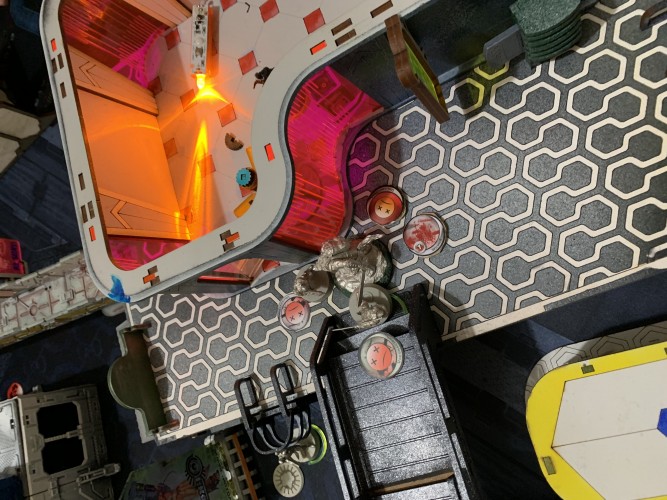 Apologies for the lack of photos from here on out. Bottom of turn 2 Duroc dies after losing cc against a monk. Wild Bill puts down the Yan Huo finally which will send my opponent into Loss of Lieutenant. My Tankhunter also dies to Major Lunar. I then bring on Margot who specfires first time onto Lunar and the robot killing them both. She also kills a bunch of monks (pictured) 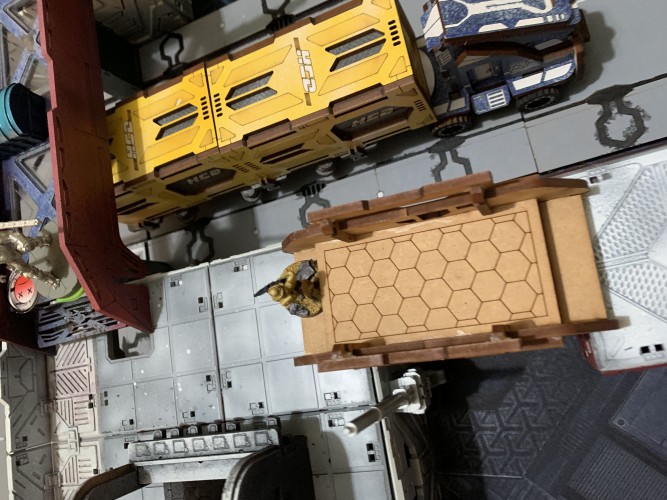 This plucky Line Kazak nets me follow up classified on the unconscious boy of the tiger soldier. I al Margot also nets me a classified by passing a wip roll within ZoC of his HVT.

Top of three: in LoL my opponent attempts to consolidate his lead. Putting a bunch of mooks up to provide AROs (I think he was out of command tokens so no suppression) and hiding his box carriers in buildings. 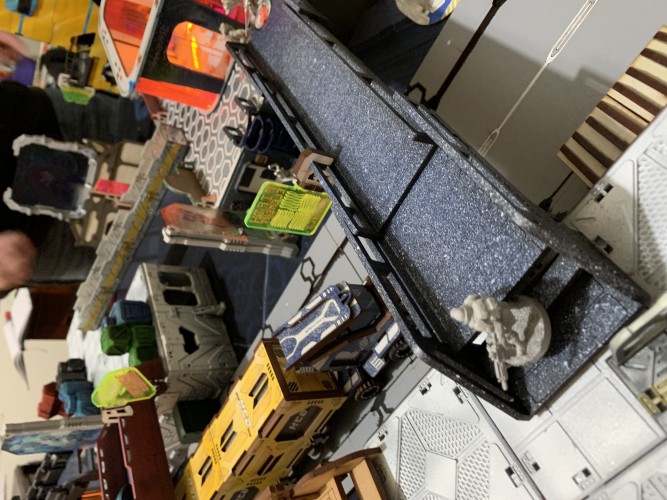 After consolidating my order pools, one of my top performers spec-ops Burbitov makes his play. He runs over the bridge into Da Club and fights his way through the fish man, tanking the mine like a boss and securing the last supply box.

After Burbitov’s run, Margot hand two orders to try a long range specfire onto one of the box holders. Though she came close to hitting, she couldn’t quite do it. A close-fought game, the Ariadna forces lose 3-5. 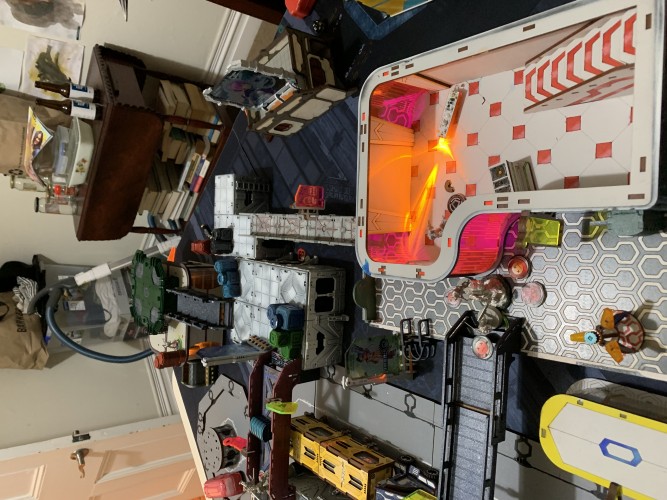 Image from Ariadnan clean-up drone, surveying the right hand side of the strip.