Tom and I were due to practice for a Tournament this weekend but instead decided to throw down for the campaign. We decided on Supplies.
I won the Wip Roll and chose to go first. Tom chose the side with slightly easier access to the supply boxes and had me set up first.
From left to right I deployed McMurrough, my Brawler MSV 2 Sniper linked to Bounty hunters the Zuyoung Haris with Valerya and the Rui Shi my Lu Duan disguised as a Motorised 112 and my Kum Biker. Then I spread my Hunzakuts, Libertos, Zhencha and Saito near the midline and the supply boxes.
Tom deployed his Dakini Link in and around a building on my left, his TR bot on a building on my right and his Asuras on my far right.
In my first turn I had a hunzakut sneak the supplies from the rightmost box and my Brawler Sniper took 3 crits through smoke but managed to eliminate the TR bot and the Deva MSV2 Spitfire.
Tom advanced his Asuras cautiously on my right using White Noise and revealed a Libertos and a Hunzakut. His Proxy Sniper that had been hidden in TO on a tower killed my Hunzakut and KO’d the Sniper. A Naga killed Saito (Who I had revealed too early) and claimed the middle Supply box. His Shukra Consultant made a run for the right Supply box but was put off by my Zhencha.
In my turn 2 McMurrough should have declined his Impetuous order but instead died to HMG and Sniper fire. My revived sniper took out his Dakini HMG and Proxy Sniper and then my RuiShi went crit fishing against his Asuras. She was killed by shot from the Zhuyong Haris trooper as he crossed out of cover as she rolled a 1 on her armour save. Having already killed his Shukra tom faced a 2nd turn in Loss of Lieutenant.
With only a few resources left Tom had a Dakini try to kill my Zhencha to deny me the right box but failed dying to mass ARO fire. With little remaining opposition my final turn saw the RuiShi kill his Naga and I claimed all 3 boxes having done a classified.
We both realised that we should have fielded Wild Bill bots but agreed that they had probably both been off in a bar. 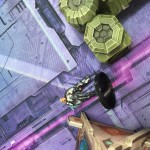 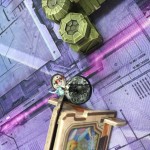 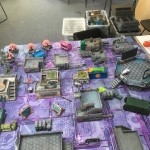 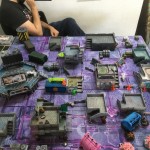