Chris and I agreed to a practice and theory heavy game to get him up to speed with his new Shasvastii I brought StarCo to see how they played.
Chris wanted to practice deployment and get the hang of where to put Impersonators and his various camo and TO troops, so I set up first and took first turn. I put Emily and her link in the middle with the Cateran on my left and the TR bot on my right. I castled up my Brawler Lt with a Jaguar and the clockmaker. Chris littered the board with Camo leaving only Taigha’s and Dr Worm visible.
My first turn saw me press up the board with my Lunkhold and Irmandinhos and reveal and kill one guy. Having cleared a flank Raoul came on and threw a drop bear at a cluster of Taihas who dodged straight for him. Chris’ Taighas ran up the board and one killed Raoul with his irregular order despite Natural Born Warrior countering Berserk, then he sent his Gwailo to try and kill my Cateran but was T2 critted and spent a chink of the rest of the turn trying to get him up. We tied for zones in turn 1.
Turn 2 saw more mistakes from both of us, I fixed the Lunkhold who had been critted by Dr worm on turn 1 and baited out more AROs with the Irmandinho. Then the Lunkhold tried to shotgun 2 people at once and went down again. My Alguacil Hacker did manage to combi rifle down the Speculo who was heading for my link team. In response Kris has a Tagha kill the Cateran and his Cadmus walk on the edge. We later realized it couldn’t do that but played on regardless and had a good look at the decoy, AD and Seed Embryo rules. Kris edged me out with more zones this round going up 3-1.
The third round I sent my TR Bot scampering up a building to get a line on his Cadmus and finally started to move my link up using the Missile launcher to kill his Gwailo. I also sacrificed an Alguacil to take out a Taigha getting chain rifled in the process but had Emily pick him up to get the Casevac Classified. Finally Kris had a good go at killing my bandit Killer Hacker with his Noctifier but failed and got Secure HVT. We tied on zones again taking us to 4-4.
After the game we had a long chat about list building and best practices with Shasvastii, I felt like I used the Emily Link team badly but the game made me want to try Lunokods some more. 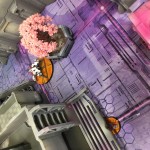 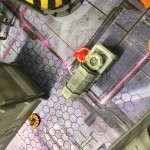 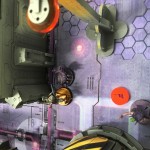 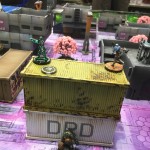 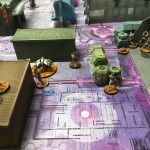 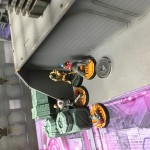 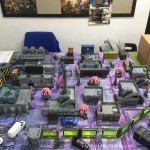 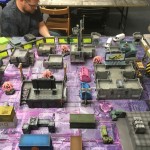