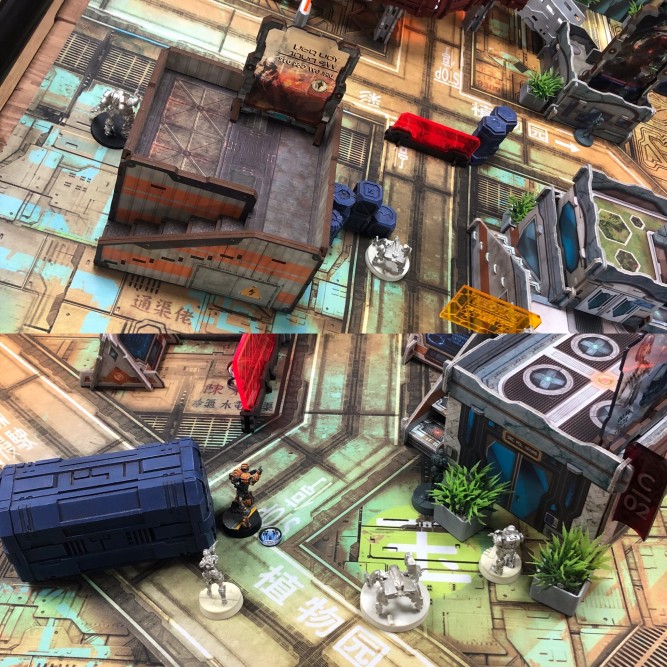 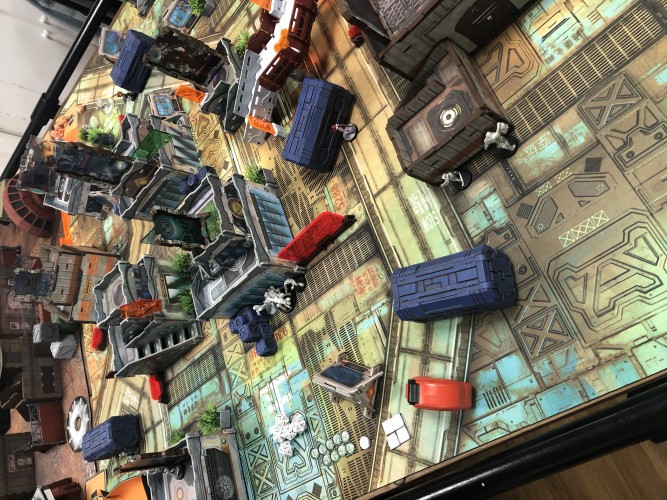 “Ahh good to have you back Sheng, how is the new body?” Asked the Lieutenant.
“They Empire spared no expense Ma’am.”
“Thats good, we need to hold this area and ensure Aleph keeps it stinking virtual self out of state business.”
“Aye Ma’am, team listen up! Get forward hold your ground and kill any synthetic dolls you see. For the Empire!”
“For the empire!”
“Jade never fade!”
“God i hate these pale dolls.”
“Boooop!”
The team responded and began their advance.

“Ma’am i have a strange ping up on the building ahead, request missile support.”
“Affirmative.”

The Zencha recon unit hacked the camouflaged troop on the building marking it for the Son Bae of the link team, the remote rained a rocket salvo down upon the building. The hiding Naga was blown apart.
“Building clear Ma’am, Taking a forward position.”
“Very good trooper, light up as many as you can.”
“Aye Ma’am.” 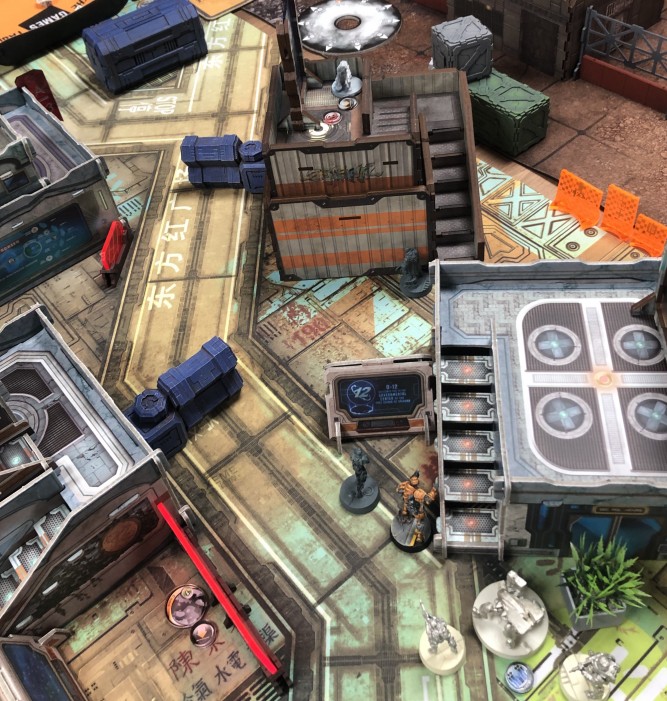 The fire team move up as the Zencha gets to work.

The zencha darted along the central road activating his camouflage on the way and into cover behind a cargo container. Booting up his hacking equipment he attempted a lock on the Myrmidom officer on the far side of the building to his right, and was immediately hit full force from multiple hacks, he fell to his knees, blood streaming from his ears and nose, he had unwittingly walked straight into range of a repeater remote. Some how his suits anti hacking protection saved him total brain damage. Knowing he was a dead man either way he attempted to spotlight the officer again.... every blood vessel in his head exploded.
The Mowang and supporting Wusong remote on the left flank pushed forward taking up position and readying their weaponsto halt any assault on the quadrant. 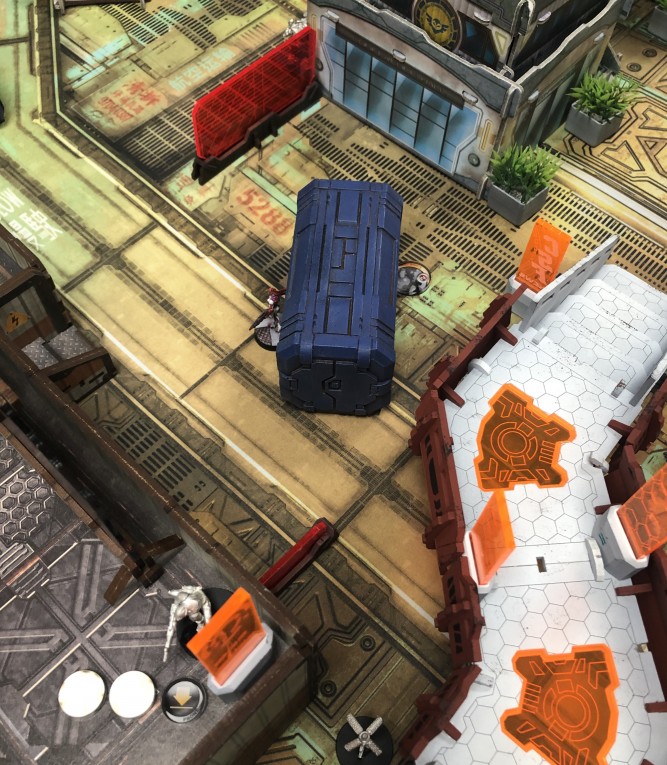 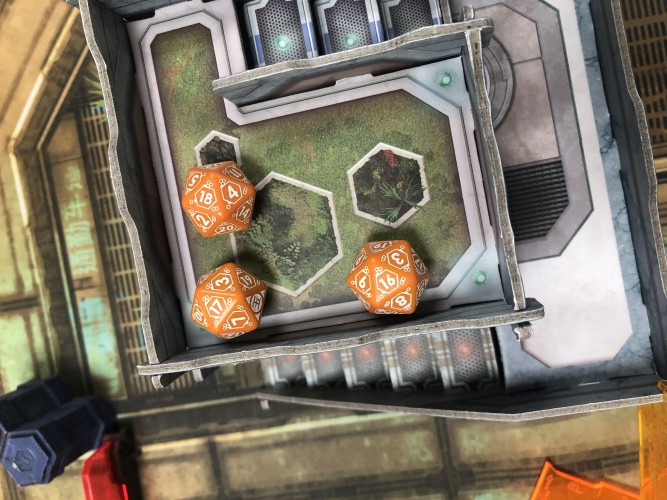 If only his BTS saves carried on being this good.

The whole teams comms went silent, the voice of Aleph, like many voices all talking in unison, began to speak.
“Forces of YuJing lay down your arms and no force is needed, this is the only offer you will receive. Thank you, and remember Aleph is your friend.”
“I don’t think so you pedantic computer!” Responded the Lieutenant.
“YOU WERE WARNED!” The voices were now one, distinctly greek and angry.
Achilles rounded the left hand building. The wusong turned on the spot and span its HMG up to fire but never got a shot off, a single bullet ripped through the armour of the remote with pin point accuracy, destroying critical systems and rendering the bot useless. The Aleph hero sprang from the cover of the building and up the adjacent gantries stairs. Mowang fired his spitfire at the sprinting enemy warrior but no rounds found their mark. Achilies, with a mocking snigger, fired a shot at a weak point of the Mowang’s armour injuring the heavy troop. 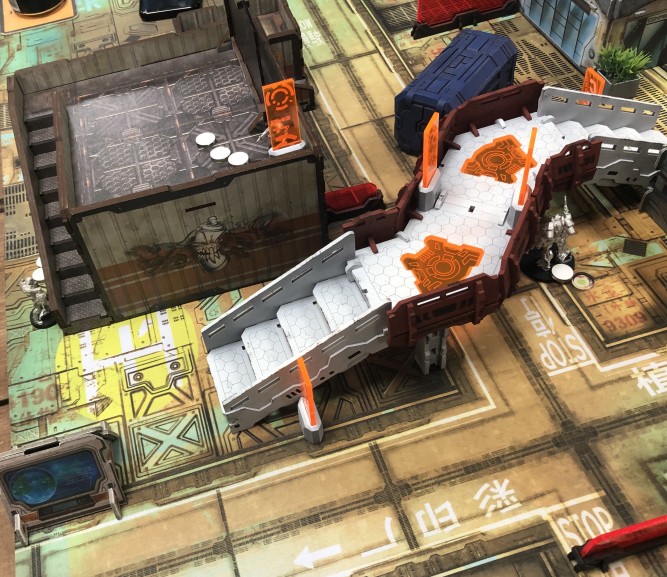 The lieutenant moved up within hacking range of Achilles and brought a guided barrage of rockets down upon him. The dust of the explosion cleared, Achilles rose barely a mark on him.
“Well god damn!? Lets see if you can do that again heel boy!”
Repeated missile strikes rained down upon Alephs great hero, when the dust and rubble settled Achilles was down, unconscious, but still breathing.
“Guess not?” Chuckled the Lieutenant.
Sheng and her Link team pushed forward to hold the two right hand quadrants and dug in hard. 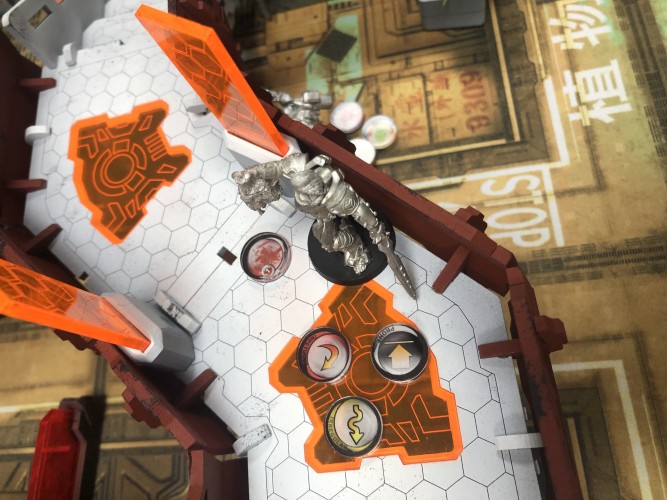 3 guided missiles and one wound.... aim for the heel! 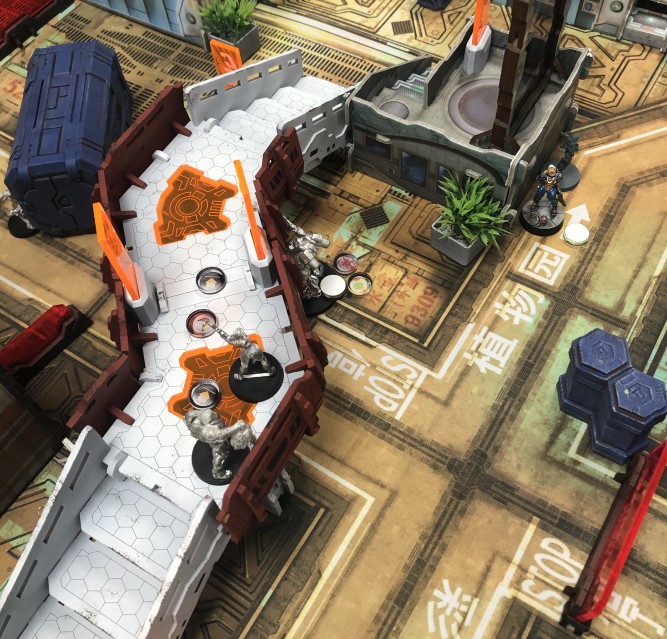 Back on his feet, but not for long.

With their hero down and them no longer in control of the quadrant the Mrymidon officer moved from behind the centre building, and unopposed straight up to the Storage container opposite the Mowang, throwing a smoke grenade under the walkway. On the left a Sophotect darted around the corner of a building and towards the unconscious Achilles, protected by smoke she hit the deck at the top of the stairs and revived him.
“Will you please stay down!” The Lieutenant sent another barrage onto the walkway, killing the Sophotect and again sending Achilles to the floor.
“Raaaaaaghhggghhh!” The voices of Aleph screemed through their comms, enraged at the loss of it’s hero.
With the biggest threat down the lieutenant bound from cover intent on removing the Myrmidon from the quadrant and securing it. Darting across to the storage container she sprung up on top and trained her shotgun on the enemy officer, they fired upon each other . The Myrmidon hit the floor injured, but was up like a shot, The Lieutenant trained her weapon on him to put him down for good. The Lieutenants chest exploded in a shower of blood followed by her head erupting, a Proxy Mk.2 sniper uncloaked on the far building smoke whisping from the muzzle of his Multi sniper rifle.
“LIEUTENANT!”
The Mowang riddled the Myrmidon with spitfire rounds and rushed forward to hold the quadrant. On the right flank the the fire team moved to secure the area, Sheng was hacked by a hidden proxy but her superior hacking protection shrugged it off. The enemy sniper desroyed the teams son bae with pin point accuracy as a HMG armed Dakhini moved on their flank.
“People if we survive this assault this sector is ours, hold your ground and make your shots count!”
The assault never came.
“Where are they?” Exclaimed sheng.
“Contact, opening fire!..... damn i hit him but it just kept moving!”
“He’s broken our lines Ma’am”
The remaining enemy forces withdrew.
“This whole god damn thing has been a ditraction! They just needed to get that operative behind enemy lines!” Sheng was enraged.

The Proxy dropped to the floor now lifeless as Aleph had left it’s host, it had infiltrated the Ops hub system’s and had all the data it needed.

Sheng stood over the body of the fallen lieutenant.
“Sheng this is command, is her cube recoverable?”
“Affirmative command, she came to this rock as a corporal and died a hero.”
“We will ensure she is resurrected.”
“Thank you command.”
Sheng bent down next to her friends body.
“Rest for now friend, the enemy will fear the name Rufang again soon enough.” 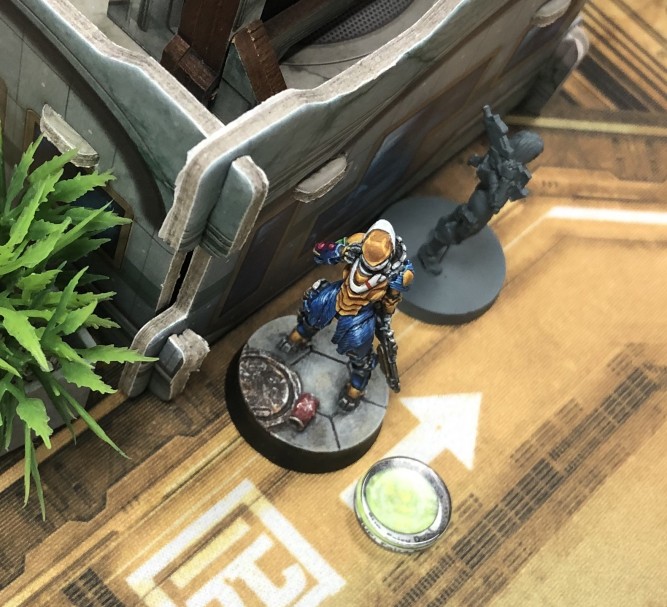 The last surveillance of the empires new hero.