The team had little time to rest before the next sortie.
Command had requested intel on the PanO controlled space dock, specifically a storage facility in the western quadrant. After liberty cargo’s support of the Japanese uprising the higher ups wanted any support in this conflict squashed before it could even start.
With Weng out of action they had no recon in the area, they were walking into PanO territory blind and vulnerable.

“Ok, ladies and gents.” The Lieutenants voice came over comms.
“The brass want this place locked down so the the contents of this facility can be ascertained.”
“I hope they’re hauling coffee out of here”
“Quite the chatter Liu, you can have as much coffee as you can drink once this is over.”
“Aye Ma’am.”

A blip showed up on Shengs HUD, and then vanished as quick as it appeared.
“ Team, anyone else pick that up that contact?”
“Negative Ma’am.”
“Probably static.”
“It came from above Ma’am?”
“Booop”

Sheng was not about to order her men straight into an ambush.

“Lieutenant we have possible enemy contact in an elevated position, request airborne support?”
“Negative Sheng, the drop ship is on route. Mechanised support will have to suffice for now.”

The husong on the left flank moved forward with the lieutenant linked to it’s sensors.
“Team, be advised possible enemy contact on our three.”
The remotes optical sensors could make out what looked like troops in cover around the opening of gated storage area… yet it’s bio sensors picked up nothing. The images flickered and disappeared as a Sepulcre Knight Opened fire, bullets tearing into the remote, on the roof of an admin building the previously unseen Order Sergeant fired its heavy rocket launcher destroying the wusong in a fire ball of mechanical debris and rubble.

The screech of vectored engines came from high above the facility.
“Did someone request a drop down there?”
“Ahh airman Yufei nice of you to join us, if you would be so kind.”

Yufei crashed into the gantry crossing the two office blocks in the centre of the facility. Immediately pings showed on his hud, six below to his right, 2 down to his rear and what ever was optically camouflaged on the roof to his left.
The hacker went to work..
Putting a target lock onto the camo ping Yufei called in a barrage from the link teams son bae, guided rockets crashed into the the hidden trooper. The smashed body of a spec. Sergeant flickered into sight.
The Sepulcre below began an attempt to move into engagement.
Yufei in a deft show of his hacking skill immobilised the knights armour.

“Sheng come in! a heavily armed fire team are moving on your position. They are out of range of my hacking rig.”
“Message recieved Yufei.”
“Team get to cover, brace for incoming enemy fire!”
The gleaming form of a heavily armoured father knight rounded the corner, opened fire and exploded from a direct missile hit from the fire team.
Ming lowered his missile launcher.
“To much?” He asked the team jovially.
The rest of the enemy fire team dared not engage after that show of force.

Up above Yufei had incoming, very fast incoming! The hatch on the roof next to the spec. Sergeants body flew open, Joan of arc shot threw sword drawn and ready to cut down the hacker.
Yufei, executed multiple locks on the surrounding enemies, guided rocket tore into Joan ending her charge and her life.
Down below the Sepulcre was nothing but red mist from the barrage.

“Keep that fire team pinned sheng, I’m heading around to their rear.” Came the Lieutenants order.
“Will do Ma’am.”

With the enemy team pinned the lieutenant made her way in haste across the adjacent road, slamming into the wall lining it.
A shot came from behind and barely missed her head, blasting a hole through the wall, she swung around. A Crusader jump troop had flanked her, he fired another shot from his shotgun. The Lieutenant dived to avoid the shot, returning fire from her own shotgun. The drop troop flew back a huge hole blown through his chest. As she landed the lieutenant activated her camo and made her way onto the enemies position. She rounded the corner and took cover behind a wall powering on her hacking equipment, she target locked a black friar who had eyes on Shengs team. The friar took the full force of a missile barrage and perished instantly.
Panicked the remaining enemy troops swung round as the camouflaged lieutenant aproached, before they knew it they were blown apart by the Lieutenants shotgun.
“All enemies eliminated, move in to secure the area.”
“Roger.”

The team made their way into the facility, which was now silent apart from the crackle of flames left from rocket fire.
As Sheng approached the far walls a flash came from the security gate ahead.
“Liu see who that is please.”
Liu crossed through the security gate, a purple clothed warcor stood shaking in fear. He strode towards the terrified man and grabbed the lanyard hanging around his neck.
“R D Dastardly: P.O.G.N?”
“Yyyes.”
“Press?”
“Mmhmm.”
“What’s in that flask?”
A thermal flask hung from the reporters belt.
“Ccoffee.”
“Fantastic!” Beemed Liu.
A yellow pool formed around the mans feet. 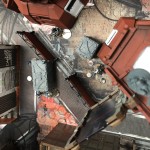 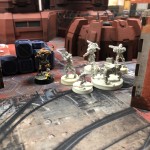 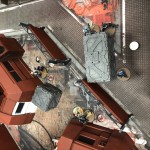 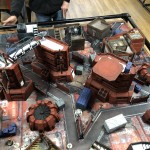