The call had come in late in the evening, an Invincibles patrol on the main strip had been ambushed.....
The drop ship circled the AO, an imperial service officer aboard surveyed the carnage.

“My god! What happened here sir?” One of the officer’s subordinates asked with equal measures fear and shock.
“We don’t no, that’s what we’re here for.”

The broken armour of terracotta soldiers could be seen on the south side of the large entertainment complex where the patrol had entered the area.
“Take us down pilot, lets see what hit these men.”
The sight was horrendous, the zuyong link team was cut to shreds not by gun fire, but blade.
The commander hooked his data tether to the armour of one of the zuyong.

(The direct cube link made the forming images seem real to the officer, everything the soldier saw now as if the officer were there.)
.
.
“I don’t like this one bit!”
.
“What’s the problem Chen? Little jaunt down the main strip, pick up some supplies and then back for chow time?!”
.
“Yeah.. but don’t you think its a bit quiet for the Main strip?”
.
“Good!”
.
.

The hum of an electric engine could be heard heading towards the fire team.
.
.
“We have incoming!”
.
“Do we have eyes on?”
.
“Negative, contact is chucking smoke all over”
.
“Shit contact will be on us in aarrrrgh!”
.
“Man dow hngghhh!”
.
.
The son bae remote accompanying the team was cut in half and exploded
.
.
“Shit shit shit what’s happening? I can’t see anything shit.............”
.
.
The soldier known as Chen fell to the floor cut from nape to navel, as the enemy exited the smoke and on towards more targets one zuyong of four still stood.
.
.
The remaining fire team member apparently unseen by the attacker drew his 2 heavy pistols and opened fire blowing the mounted samurai off his bike and killing him instantly. 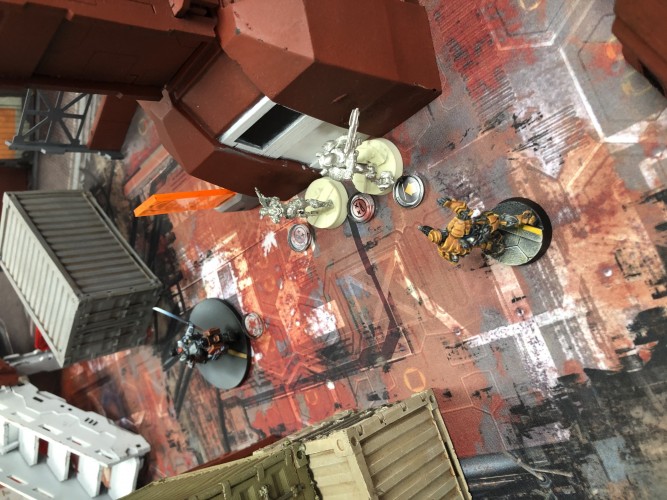 The hired sword is shot down.

.
.
The lone zuyong dodged a burst of gun fire from behind firing back as he dived, he landed with a roll and was cut down by another burst of fire from the large samurai who had out flanked him. His helmet fell from his head, Krit Kokram had fallen.
.
. 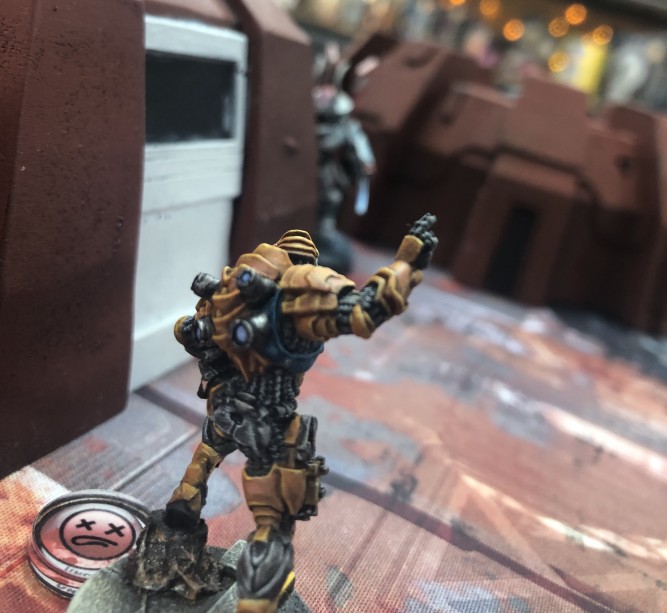 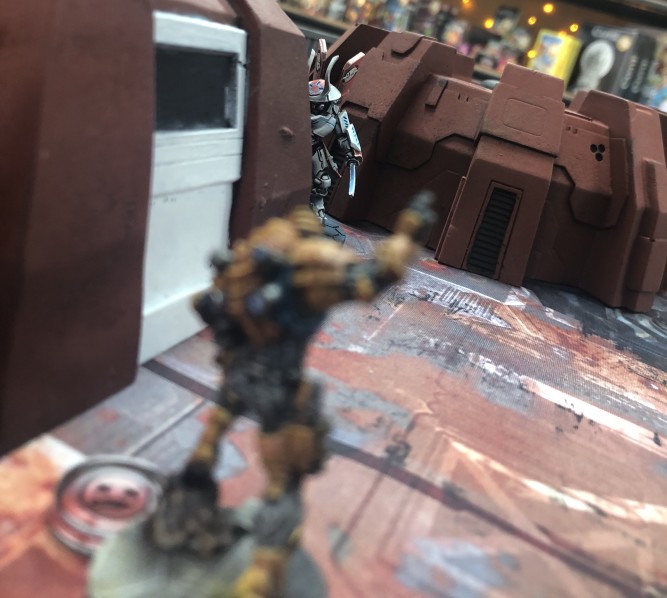 The officer followed the road up to the wreckage of a Husong remote under a raised walk way. The remote had been obliterated by heavy armour piercing rounds, only a TAG could carry that sort of weaponry.

“Sir, you are going to want to see this”

The officer’s team had found the body of a Liu Xing drop trooper on the far side of the AO.
He jacked in to the armours data feed.

————+loading data.......
.
.
————+1410hrs Main Strip
.
.
The ground rushed towards him. Heavy machine gun shots came from under a walkway to the left, ricocheting off the armour of an O-yoroi TAG. The hulking machine fired its weapon and an explosion came from under the walkway.
.
.
“Target acquired Lieutenant.”
.
“Very good trooper, get to work I want that thing stopped”
.
.
The drop trooper slammed into a cargo container behind the enemy tag, buckling the metal.
.
.
“Right lets make this thing do some work for us”
.
“Damn systems are protected with some hefty firewalls!”
.
.
The troopers possession program could not take hold of the enemy TAG. Enemy light infantry were moving in on his left, shots tore into the metal next to him, he dodged the incoming fire hitting the ground beside the containers . Suddenly the O-yoroi was on his right Multi HMG trained on his position.
.
.
“Shit! How the hell did she get past my equipment”
.
.
The Liu Xing was torn to shreds by the TAG’s shots. 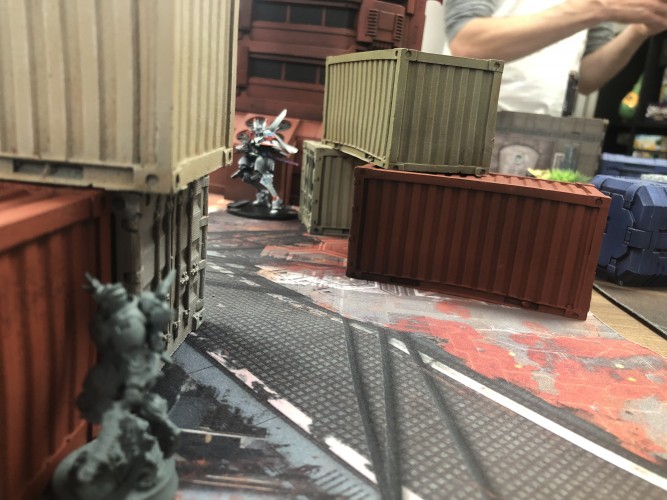 Stealth gets a TAG out of trouble.

The officer disconnected. To the left of the TAGs last known position was the eviscerated body of a Hulang shock troop.
.
.
————+loading data.....
.
.
————+1415hrs Main Strip......
.
.
“Ma’am the enemy armour is closing on supplies.”
.
“Copy, make that bitch pay and find out what’s so important in those crates.”
.
“It’ll be my pleasure”
.
.
The shocktrooper sprang from cover and darted towards the TAG a round from it hitting the charging Hulang as she ducked to cover, sliding on her side along a small barrier and diving from cover dodging swipes from huge armourd fists and onto the back of the enemy, she looked for a weak spot to drive her monofilament blade into.
.
.
A mechanical hand grabbed her and threw here off its back, drawing its blade with incredible skill and speed it cleaved her in half and sheathed the blade before the now two blodied parts hit the floor. 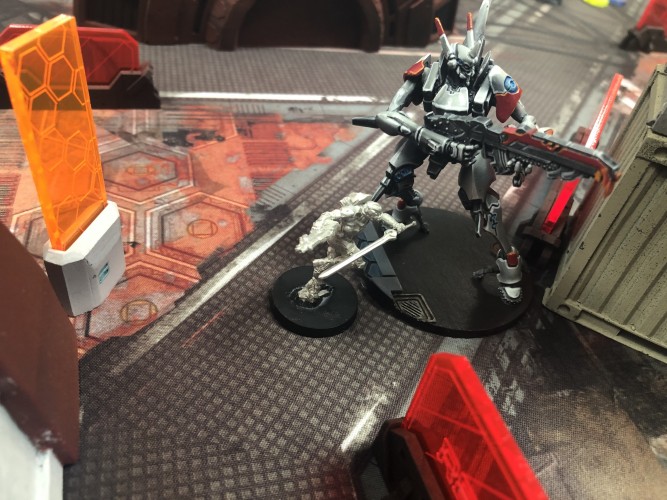 .
.
A ninja appeared from the shadows, it had watched the whole short fight. Stepping over half of the Hulang and collected what ever was in the tech coffin near by.
.
. 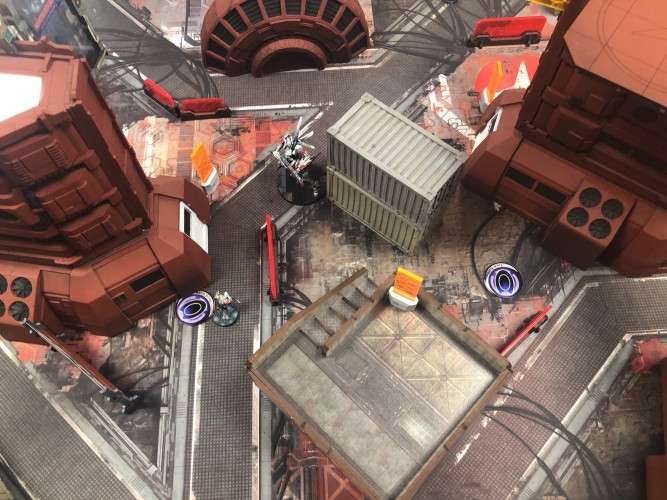 And JSA with the win!

The officer disconnected.
“A ten strong force of invincibles wiped out in under half an hour!? This commander was skilled” he thought, bitterly.
“Team any sign of Daoying Lieutenant?”

“Probably being interrogated as we speak”

One of the investigation team approached.
“Sir we have found an intact remote on the left flank”

“Purge all data from it and burn everything left here, the empire does not need this defeat getting out.”

The officer walked away towards the drop ship.

Above the motionless remote and the ISS inspector a lithe figure flickered out of thermoptic camo.
This is one time the truth won’t be destroyed.