The order was simple: to get back some shipments of Zuyong armour that somehow ended up in possession of the Ikari Company. Due to the delicate nature of the mission, an armored detachment of the Invincible Army was tasked with the retrieval. Unfortunately, the O-12 got wind of this delivery and was determined to confiscate the crates. With both sides determined to get the contents, a brief but intense firefight started…

The mission was a total disaster from the beginning. Recapitulating the past 5 minutes, the Daoying tasked with supervision of this mission decided, it would be better to never show up again at Central Command.

We played 300 Points / 6 SWC Supplies of Invincible Army vs. O-12 on the Main Strip. O-12 was able to win decisively 0-10 by not only fulfilling every mission objective, but also by murdering effectively every resistance. Except for the Wild Bill-Bot. 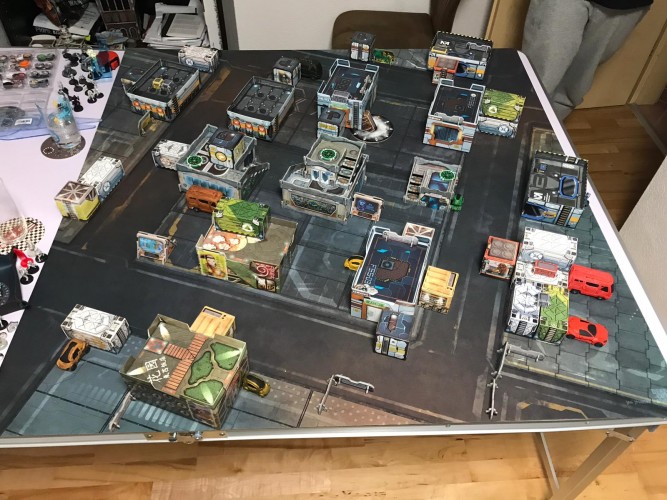 Both of us play new armies for this campaign: CM_Punk started O-12 with the recent Wildfire-box and I decided to pick up the (In)Vincible Army. Since both of us just recently did this, nearly no figure was primed. Sorry for that.

The drawn classifieds were as followed:
O-12:
- Experimental Drug
- Something that was never intended to be fulfilled and therefore substituted by Secure HVT
Invincible Army:
- Extreme Prejudice
- Telemetry

CM_Punk won the Lt. roll-off and decided to take initiative. Generously I let him deploy first on the side with the chair.

O-12 decided to deploy its key pieces aggressively backed up by two flash pulse drones (lower left side). On the far right side, a Dakini with MULTI-Sniper was deployed. On the building next to it, a Gangbuster with KHD lay down and provided some protection with its MadTraps.

Another Gangbuster with KHD was deployed on the right building of the cenral line, shutting down a good portion of the field. As a support piece, a Siriusteam as FO was deployed next to the central building.

In the shadow of the building were the smoke template can be seen (played as a zero visibility zone), a Betatrooper doctor started, ready to come out once the central perimeter has been secured.

On the right street, a Gamma with Feuerbach and a Varangian were deployed. The Varangian should provide smoke for the Epsilon with HMG who was lying on the building left of the two. 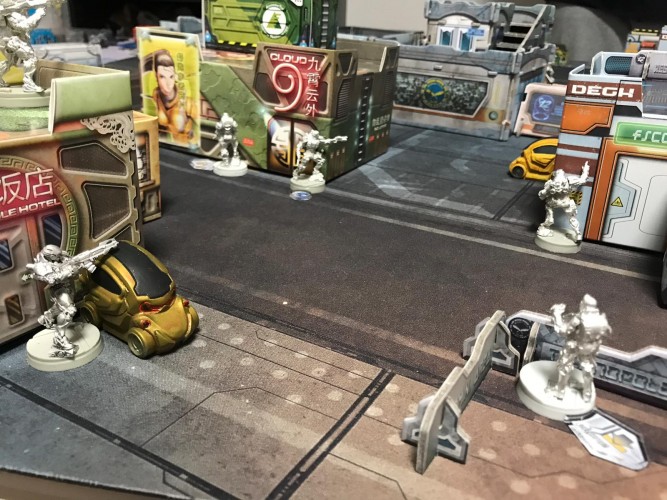 Deplyoment of the Invincible Army

Since I brought a pain train of Zuyongs, my deployment was very compact. The Zuyong ML stood on the central building with good view on 2 of 3 Supply crates. The Hai Dao KHD had a look to the left while Tai Sheng with Breaker Rifle (proxied by the Multi Rifle Zuyong) and Krit with Combi Rifle were tasked with guarding the central lane. The HMG Zuyong supported them.

The Mech Engineer seeked cover behind the barriers to provide assistance to the link in case Krit went down.

A Daoying Lt. was hidden prone on one of the roofs and the Zhencha was ready on the central building to snatch the crate (Camo token is hidden behind the roof railing). A Liu Xing was waiting in orbit to drop in and catch a supply box once an opportunity occurs.

Wild Bill was tasked with guarding the right flank (Not on picture, right on the right side of the field of view)

In his first turn, CM_Punk mainly brought his troops in better positions.

Team Sirius advanced under smoke cover so that in a subsequent turn the FO could grab the box on the far left from O-12's point of view. Its Siriusbot went in the central lane, covered by the Zuyongs and tried to glue Krit. I broke the link so Krit could Dodge and the HMG and the ML shoot. While the heavy weapons were succesfull in neutralizing the thread of the Siriusbot, Krit decided to stand still for the moment.

Next, the Epsilon tried to shoot Tai Sheng but only scratched off one wound. Tai Sheng decided to seek cover.

Entrance Gamma. The big guy went to the central lane, now nearly uncovered ("only" the heavy weapons remaining"). He got a shot on the HMG without being seen by the ML and put the poor guy to sleep. Next, he tried to do the same thing with the ML but he simply made all armour saves, surviving two hits of the Feuerbach unscratched.

At this point, the orders were used up and my turn started. 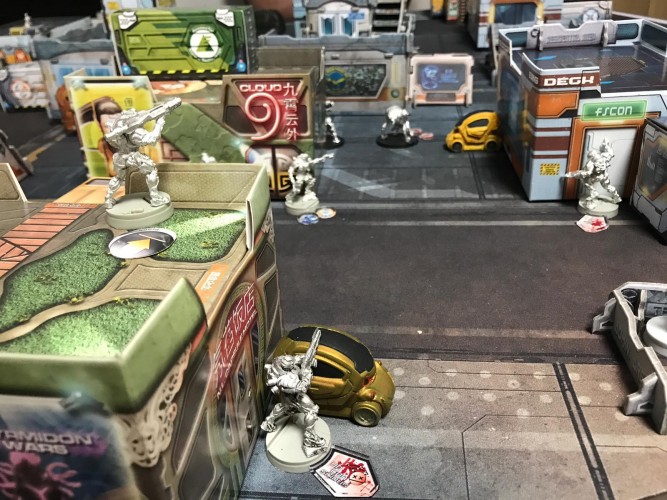 End of Turn 1 of O-12. The Gamma enjoys the carnage he brought.

With the link restored and 1 command token less, I started to try to get rid of the Dakini Sniper which covered the ML. In which I was successfull, costing me 3 orders and one wound of the ML.

Next, I needed to dispose of the Gamma who locked down the central lane. The ML was in a position so he could see the unconscious Siriusbot but not the Gamma but still place the template over both of them. Unfortunately, this killed the Bot but did not wounded the Gamma even once. Next best plan: Shoot the Gamma directly with the ML. This knocked the ML off his feet, getting me desperate.

I tried to use the Zhencha on the building behind Gamma to put him down but two hits of the SMG did unfortunately only one wound and the activated MadTrap glued the Zhencha.

Since Tai Sheng would be seen by the Epsilon when she tried to engage the Gamma, the Epsilon had to die first. Entrance Liu Xing. He landed on the building of the Epsilon, covering also the Betatrooper with his template. Unfortunately he was stunned by a Drone in the process and did not manage to put down the Epsilon...

Getting even more desperate, I used Tai Sheng to fire upon the Gamma without caring for the Epsilon. The Gamma lost his last wound, activating NWI, and Tai Sheng survived the unopposed hit of the HMG.
Unfortunately, this was my last order, so O-12 could start to strike back. 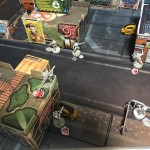 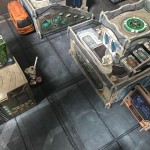 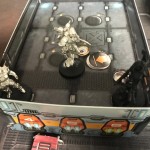 With nothing left to defend the supply boxes, CM_Punk used most of his turn to grab two of the boxes. Due to some unlucky roles, this took most of his turn. The rest was used to get his Betatrooper immobilized by my Liu Xing (AHD), to kill the Liu Xing with a KHD Gangbuster (the one deployed on the right building of the center line) and to reset 3 or 4 times before the Betatrooper could move again. 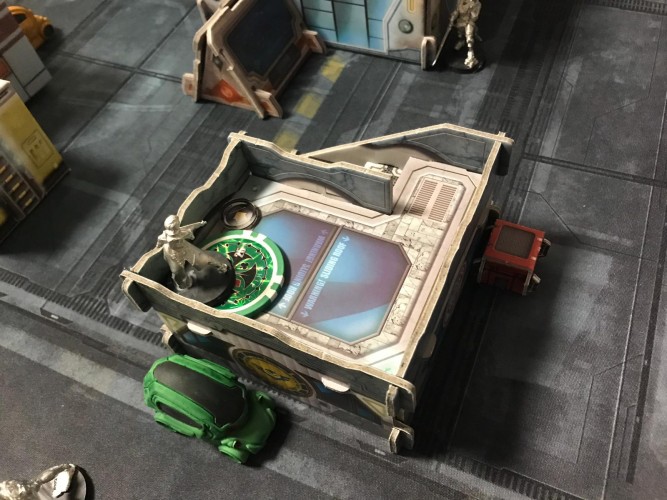 Now everything is done to prevent more damage. The Hai Dao KHD moves in to kill the Gangbuster KHD that holds the box. Unfortunately, the dice do not seem to understand my plan and the head of the Hai Dao is fried instead.

With Tai Sheng still pinned down by the Epsilon (the Gamma has fled behind a corner in the meantime), Krit could get a leverage over the Epsilon. The Mech-Engineer leaves his cover, only to fail 3 times in a row on un-glueing Krit...

The last order is then used in a desperate measure to kill the Epsilon but probability strikes and Tai Sheng goes down. 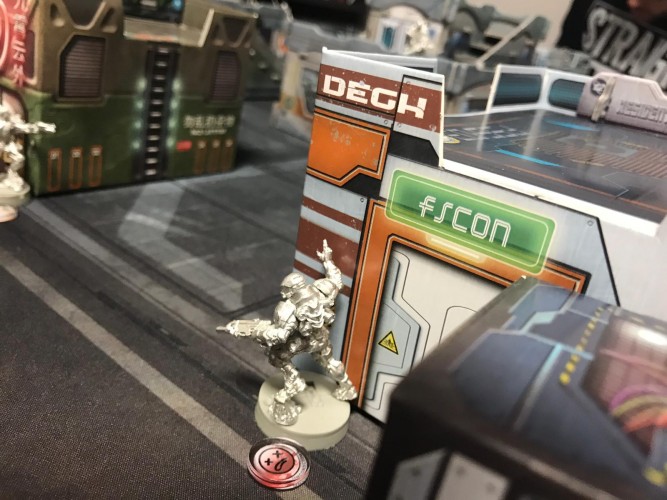 The night is darkest before dawn. Or something like that.

With no real opposition left, O-12 starts shooting statues. The Betatrooper runs in direction of Krit (and heals the Gamma on its way for Experimental Drug) and kills him. Afterwards, the Zhencha falls victim to the Gamma. Then, he moves a bit to also kill the Mech Engineer that hid behind Krit around the corner (but not before the Engineer made the Gamma suffer another wound!).

In other news: An Omega who did nothing up until now grabs the last box and Wild Bill Secures my HVT. 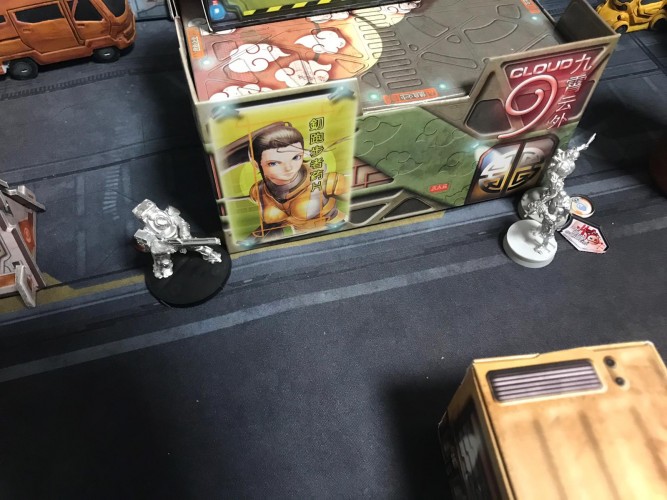 "Not so invcincible now, are you?!"

Retreat: check.
No one left to do something of importance: check.

The hour of Wild Bill is here!
He shoots with his irregular order the Varangian that crept towards him in the last round. That's it.

And the order of the Daoying is used to commit suicide by jumping from the roof (yeah, yeah, she is not allowed to do this while prone, but it fit the narrative of everything going south).

So, that's it. No heroic last stand or turn of the tide. 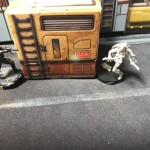 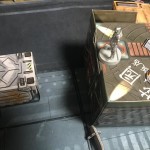 Although this was one hell of a loss, the two of us had a lot of fun due to a lot of bad rolls and improbable results. Strategic insight was not really gained except for "Do not play when you are really tired" but we both think that the armies have potential.

And of course there will be a revanche so that the State Empire gets back the Zuyong armours that O-12 just confiscated!