Addition to the Battle Report: To both lists you can find below there was an extra Wild Bill added as per the “Supplies” special rules for this mission.
Also thanks to baggage I would have had more surviving troops than 300, but the interface doesn’t accept that, so don’t wonder when I lost troops but still have 300 points surviving.

Todays Mission is simple, we will infiltrate the Facilities and extract the information needed.
Be wary, we’ve got reports of an incoming opposing force of heavy Infantry from the State Empire. Mission success is critical. Lethal force is allowed!

We approached the Facilities from a wide spread, Team Sirius and Gangbuster infiltrating far forward to check out the situation, Omega using the smoke screen coming from an exhaust point to cover his advance. Epsilon going to give us fire support from a rooftop, while being supported by the Varangian Guard. That leaves the Gamma to be the brunt of our offensive, supported by a Betatrooper with medical equipment. The rest will be the rearguard.
Oh and we hacked a Wild Bill trainingsbot during deployment of our troops, it may prove valuable.

Opposing our missions success was a fireteam of Zuyong heavy infantry, equipped with several heavy weapons. The enemy deployed defensivly and covering streets from a rooftop as well as from cover. With them was field support from an Engineer and a hacked Wild Bill Trainingsbot. More enemys suspected, but not yet confirmed.

Turn 1
Team Sirius was ordered to check out details about the opposing force. Covered by a smoke screen the trusty Siriusbot managed to go deep into enemy territory and immobilise one of the enemy Fireteam (Krit Kokram). During this the enemy Fireteam broke their coordinated advance and the HMG and Missle Launcher shot and disabled the Bot.
Our Epsilon used his superior position from atop to shoot at Tai Sheng, wounding her and forcing her to take cover behind a wall.
With a clear path the Gamma was send straight to the high priotity targets, sending the HMG Zuyong unconcious and forcing the Missle Launcher on the Rooftop to lay down while surviving a direct hit unwounded.

The Missle Launcher fired two shots at the disabled Siriusbot and caught the Gamma in the Blast. Luckily the Gamma managed to survive unscaved, thanks to the superior armor worn.
https://bowlivestorage.blob.core.windows.net/asteroidblues/formidable/9/G.jpg

The Missle Launcher proceeded to lay fire down, destroying our Dakini Sniper in his nest, although being wounded in the process.
Thanks to the previous wound taken, when trying to attack the Gamma he was struck down by the Feuerbach.
A previously camouflaged Zhencha gave his position away by shooting at the Gamma’s back, causing a minor wound. The Zhencha itself then was glued in place by the trusty Madtrap positioned by our Gangbuster.
https://bowlivestorage.blob.core.windows.net/asteroidblues/formidable/9/D.jpg
A Liu Xing took it’s chance to remove the threat of our Epsilon from the field by explosively landing between him and our Betatrooper, which both survived unharmed. In the process the Droptrooper was stunned by a flash pulse by our deployed Kyttä.
Tai Sheng forced the Gamma back and sending him on live support.

Turn 2
We’ve managed to exclude 2 of the 3 information for which we came for, but this took longer than we expected. The security programmes proofed more challanging than assumed, better training and planning is needed in further operations.
The Gangbuster proved his worth again by killing the Liu Xing in an Infowar attack.

The Haidao Killer Hacker tried to take his revenge, but was also struck down in return by the Gangbuster.
https://bowlivestorage.blob.core.windows.net/asteroidblues/formidable/9/B.jpg

The enemy Engineer sneaked behind the still in his armor imprisoned Krit and tried to free him, but saw himself unfit to remove the glue from the interior armor. Tai Sheng took a peak out of her corner to check for options, but was send unconcious by the Epsilon from his rooftop.

Turn 3
The Omega was able to secure the third terminal and finding the information we needed!
As he was on life support we took the chance to test an experimental drug on him, the science lab will thank us for the field test.
Being strengthened, the Gamma tried to eliminate the last threats, eliminating the Engineer and Zhencha, but took another wound in the process. Thanks to our drug he still managed to remain conscious.
The Betatropper eliminated the still immobilized Krit.

The Varangian Guard went too far forward to inspect the Wild Bill Trainingsbot (huge Fan of his Aristeia days of glory!) and was struck down by the bot.
Opposing Troops then went into full retreat.

Mission:
We managed to extract the information from all 3 terminals, preventing the enemy force from getting hands on them and testing an experimental Drug.
Also the Trainingsbot somehow managed to secure the HVT when our forces could not be spared, so it’s acquisition was worthwile after all.
Rating: Total success 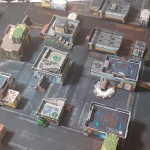 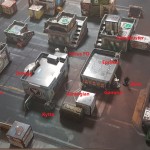 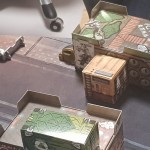 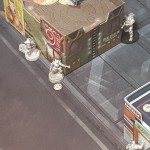 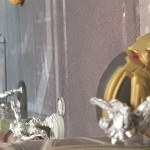 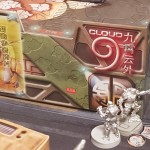 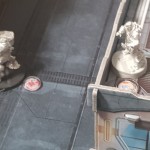 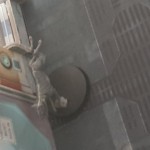 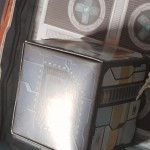 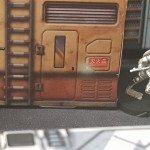