Enraged from the last bar fight, Angus was determined to take revenge from the fat Yuan Yuan who jumped over him. The trails brought him to the Novy Bangkok Spaceport where a warband of Ikari Company was preparing an assault on a negotiation of Qapu Khalqi and Nomad forces. While puzzled that both sides had numerous Yuan Yuan pirates, poor Angus found himself in a firefight. Now he had to decide which side to support… or hide behind ‘till Bipandra brings reinforcements. 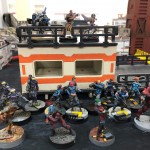 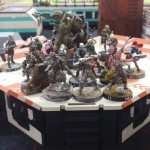 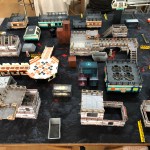 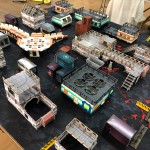 At the moment when the battle began Pasha Security Company hired by Qapu Khalqi was escorting a Nomad delegate to the Command Center. There were explosions in the dome of the spaceport, causing several hull breaches. By the harsh shake and surprise attack of Ikari Company, Nomad delegate (HVT) was split from the escort her personal guard (Mobile Brigada). A team of Sekbans (haris, spitfire, HRL) climb on a platform for a clearer view in the middle, where the engineer set up a Total Reaction REM. A fire team of Ghulams including a missile launcher settled to a little platform in the right wing. They were accompanied by a doctor and a Warcor. While missile launcher, doctor and the Warcor was over the platform, the rest was cover the right and rear flank. Mobile Brigada was enjoying his favorite Bakunin techno-music.

Rodriguez, one of two Hawwas who were hiding in the center of the hangar, reported the hostile group. “It’s Ikari Company, a team of a Tanko, a Brawler, 3 Keisotsus with snipers and missile launchers heavy. There are other line troops, but?!? Its Scarface and Cordeila. I repeat we have a TAG here!”

Two Qapu Khalqi Yuan Yuans immediately responded to emergency code. Unprepared Vixen just arrived to rear flank of defense line, but Barbossa the Red managed to jump in the enemy deployment zone. He quickly finished with a bounty hunter sniper, but got hit by the Tanko. Rodriguez the Hawwa Hacker sneaked to get closer to Scarface and initiated the hacking programs. Mustafa – the second in command barked in commlog; “What are you waiting for, you lousy Nomad? I don’t want that TAG come closer to us!”

Rodriguez who was an ex-Zero Hacker responded; “Its really hard to hack this kind of trash TAG. It’s a model behind the stone age. I am surprised that its even walking. Its engineer should be genius with these out-of-date software. Here it is! I got it! I have a total control!” (after 5-6 attempts of order consumption) 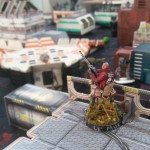 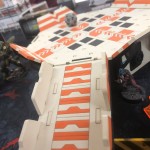 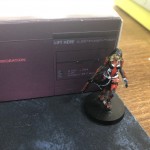 In a few moments, the Fat Yuan Yuan and 4 more jumped from the hull breaches of the dome. They landed around the Pasha Security escort group. One was shot by Fatma (Ghulam), other one was exploded to pieces by missile launcher, the third one dispersed to Ikari deployment zone due atmospheric vacuum. Even there was a firefight, Mobile Brigada was unaware or maybe ignoring the battle. Hiding in a safe spot, Angus pointed and trying to tell something. But Brigada didn’t care him and continue to listen his music and headband. This lasted until the Fat Yuan Yuan and another’s chain rifle shots broke his radio antenna. Enraged he changed face calmly, looked at the puzzled face of space pirates, and shot them both with his boarding shotgun.

Warcor shouted and pointed 3 Druzes who was sneaking from right flank. Leia – the forward observer Ghulam was panicked. “Druzes allied with Ikari? We are screwed up!” Mustafa who was more experienced responded; “Druzes are fierce fighters, but cant sneak up from flanks. They are Holoechos! Shoot the closest ones!” Leia and Fatma hit Holoechos, Warcor stunned the Bashibazouk with his flash-pulse.

Warcor shouted again; “they are coming again!”. Warcor and Fatma hit Holoechos, Leia missed the Bashibazouk and got hit by him. Fatma had to avenge her. In a second, the third wave arrived. This time Warcore was hit, Fatma first shot the Holoechos and then finished with the Bashibazouk. Fatma was exhausted and cursed when she saw the approaching the fourth wave; “Wtf! Its like a video game. They keep coming and coming!” Fatma hit a Holoechoe and knew that this meant the real Bashibazouk would take her down. But a boarding shotgun shell hurled the Bashibazouk 2meters back. Fatma glanced back to Mobil Brigada who finally decided to join the fray. The Nomad tank said; “There bastards broke my damn radio antenna! They will pay back.” Angus hugged one of the Brigada’s leg and crying; “Its all my fault! I shouldn’t have bullied a Yuan Yuan. I should have listened to Bipandra. They will kill us all.” Mobile Brigada looked at the PanOcenian soldier with a disgust and responded; “They are all filthy sissies. Let them come and try!” 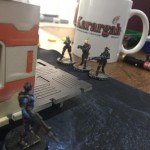 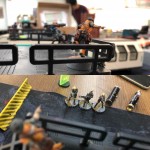 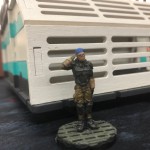 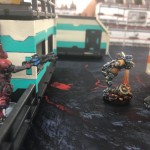 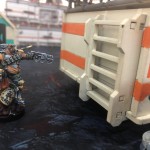 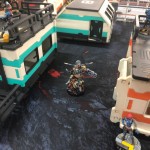 Pasha Security escort group had repelled the jump troops and parachutist attacks, but had suffered significant losses to Brawler sniper. Doctor Hikmet healed the missile launcher Ghulam and the engineer fixed the Total Reaction REM. The activated REM and Ikari fire team exchanged fire. Finally the REM was damaged again, but managed to shoot sniper down. Possessed Scarface turned back and laid Cordelia unconscious. Then advanced to Ikari deployment zone while firing. Mustafa – the second in command barked again in commlog; “Rodriguez, you scumbag, you stink in shooting like you stink in hacking. What are you good at?”

Rodriguez responded; “Do you know how hard to control this piece of junk?” After a few attempts, Ikari fire team damaged Scarface really bad. TAG collapsed to ground and Joe Turner jumped out from the cockpit. 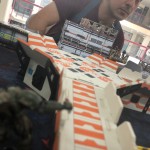 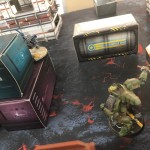 Ikari fire team continue to wreak havoc in the platforms where Qapu Khalqi forces had losses. Ikari lost Tanko, but they shoot engineer, Nasmat and missile launcher down. In this cover fire, Joe Turner ran away to a safe place. 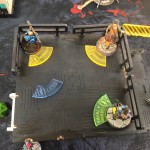 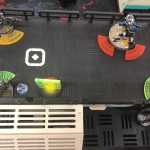 Doctor Hikmet healed the new wound of missile launcher. Mustafa forwarded the orders from High Command. “Hawwas, acquire the databanks from the panoplies. We can’t risk the possibility of reveal the details of our business with Nomad. This can expose the collaboration and strategy of our business.” Rodriguez and other Hawwa opened the tech crates, extract and erase data from the data base.

Mustafa issued the second order; “Rodriguez, blow up the landing pad!” Rodriguez couldn’t believe what he heard so he wanted him to repeat. Mustafa confirmed the order; “We have to play victim here in order to justify a larger reinforcement presence in spaceport. A few casualties, wounded and damage wont be enough. We have to convince O-12 that we have been attacked by a large force and heavily damaged.” Rodriguez placed a D-charge to landing pad and detonated it. (Classified – Sabotage)

Joe Turner crawled to remaining panoply, but found only shiny weapons. Ikari withdrew who lost their surprise attack advantage and their TAG. 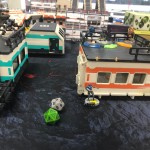