Lie Ren and his subordinates had this time been sent to Harry’s Bar at the Main Strip, after a fruit merchant called the ISS Durian inspection unit frantically talking about weird Durian fruit and Lie Ren was sent to respond. ISS notified Lie Ren to prepare for potential Shasvastii infiltrators.

Notes: Sorry for the unpainted models. We also proxied a few models. Proxies are listed below.
Yu Jing won the roll-off and chose first turn. Combined Army as a result took deployment and made Yu Jing deploy first.

──────────────────────────────────────────────────
“So, we are at a bar, expected to fight alien infiltrators and cannot even get a drink.” Lie Ren thought to himself. “Everyone, this building provides good cover and lines of sight. We take up position here. Except you Ha Rui. You do your own thing, but make sure the cube is active, just in case.” he ordered over the comms. “Wild Bill, go look after the HVT please”.

After moving into position, Zhen-Long spotted the enemy HVT. “Sir, I think I can get a shot off at the target.” Zhen-Long muttered into the comm. “Alright then, take it!” Lie Ren barked.
Zhen-Long unloaded into the target, killing it.
“Alright, any other targets?” Lie Ren asked, hoping the answer would be a “no”.
“Yeah, there is something over here” Dong Fa replied. “But I am uncertain as to what it is. Let me just get a better look at…” The rest of the sentence was interrupted by a rocket flying wide, fortunately not hitting anyone. “Oh damn.. Well, I know what it is now. It is a f**king Caliban. Permission to fire?” Dong Fa clarified. “Permission granted, bag the bastard.” Lie Ren commanded.

And with three shots fired, the Caliban was no more. “We should probably clear the building in front of us” Cheng Da chimed in. “Yes, but it is risky” Lie Ren replied. “So why not use the extra we got? Wild Bill, go and peek into the building in the middle.”

Suddenly, a shot rang out but it didn’t hit Wild Bill, so he proceeded as told and got into cover. “Wild Bill, shoot whichever c**t that was.” Lie Ren commanded with vigour. Wild Bill complied with a series of pistol shots, though the now revealed Shrouded Hacker was unharmed and placed down a mine.

“Well, that will be tough to get past” Lie Ren ruminated.

“Well, this flank is boring, nothing is happe.. Oh shit!” Ha Rui suddenly had to shift mental gears as a Gwailo ran up towards him. Ha Rui opened fire and got a shot in the gut for it. “Ahh for F**KS SAKE!” He whispered through gritted teeth. He had to pull back now, before he got blasted into the next town over.

“Incoming Zhen-Long!” He shouted into the comms. It was too late, Zhen-Long was down. “Well, at least he ain’t dead yet.” Ha Rui thought.

The next shot was coming straight at Dong Fa. “Oh f**k my life” Was the one thread of thought as the rocket hit him. “ohoho, that bastard will pay for this! This hurts like a motherf**ker!” he vowed to himself as he was surprised he was even still standing.

“Ha Rui, can you get this c**t? We need him gone ASAP” Lie Ren enquired. “I can damn well try” came the reply.

Ha Rui went into a flurry of action, peeking out from behind the shipping container and blasting the Gwailo again and again. It took three attempts, but the Gwailo was finally lying on the ground and definitely wasn’t breathing. “And that is for blasting me and my mates you c**t” He said quietly as he advanced ahead, trying to keep the enemy off balance.

The response came swiftly. Another Shrouded came out of nowhere and blasted his shotgun at Ha Rui before he even knew it. “Holy f**k where did this bastard come from?” He considered as another shot got him square in the chest and he fell over. As his consciousness faded, he thanked whatever powers might be that he was hit in his chest, so at least the cube in his head was still operational.

“Oh. Damn. Ha Rui got taken out” Lie Ren mumbled. “Alright, Wild Bill, move up and see if the f**ker that shot before is still in the building” Wild Bill did as instructed and got demolished for it, as an Anti-Personnel Mine triggered by his approach. “Alright, Dong Fa, see if you can get the guy!” Lie Ren grumbled in a frustrated tone.

Dong Fa shifted over to cover the entrance to the building and line up a shot.
“I see the bastard sir” came the reply. “Not a great shot, but I figure I can get a couple off before return fire. Should I proceed?”
“Do it” ordered Lie Ren impatiently.
There was indeed return fire, but all of it missed. Dong Fa was as accurate as ever though, and the Shrouded Hacker was dead as a dodo.

“Sir, I think they are withdrawing.” Dong Fa stated hopefully.
“That’s right, f**k off you alien bastards!” Lie Ren shouted. Get out of here!

And with that, it was over. Zhen-Long was fortunately able to recover, but was severely injured, whereas Ha Rui would need an entirely new body, but at least his cube was intact.

The board as viewed from the Yu Jing side.

The board as viewed from the Combined Army side. 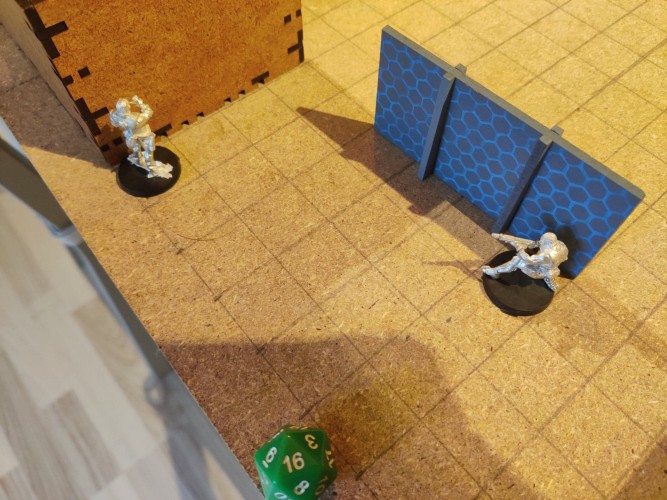 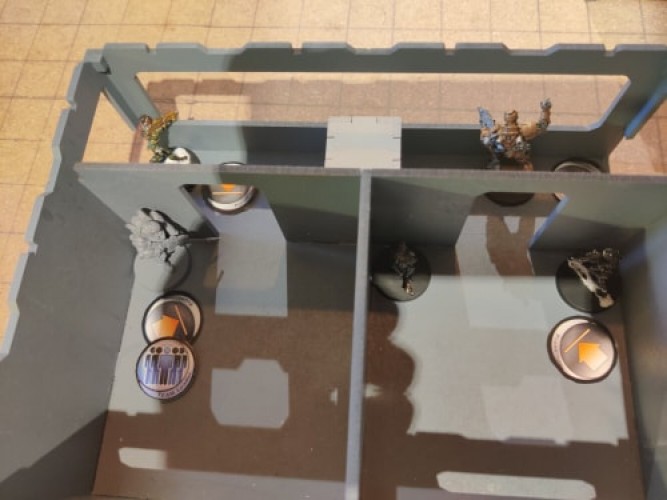 Yu Jing deployment continued: Yu Jing deploys a fireteam consisting of a Haidao sniper, three Zhanshi's (one Lieutenant) and a Shang Ji in a building slightly left of the middle of the Yu Jing dep. zone. 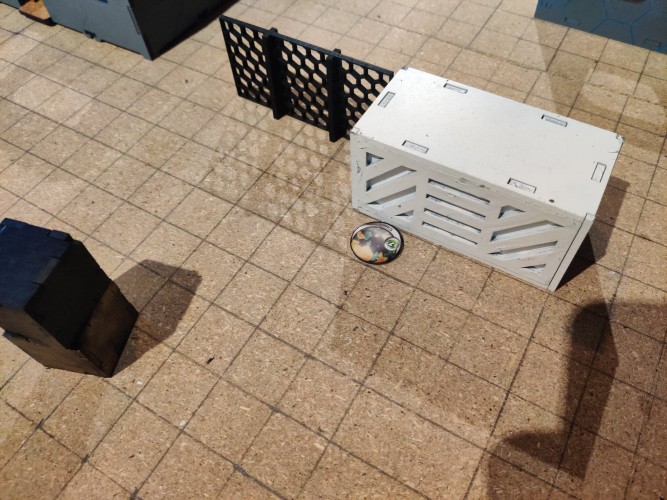 Yu Jing deployment continued: Yu Jing deploys a Zhencha FO in camo marker state on the other side of the white shipping container where the CA HVT is placed. 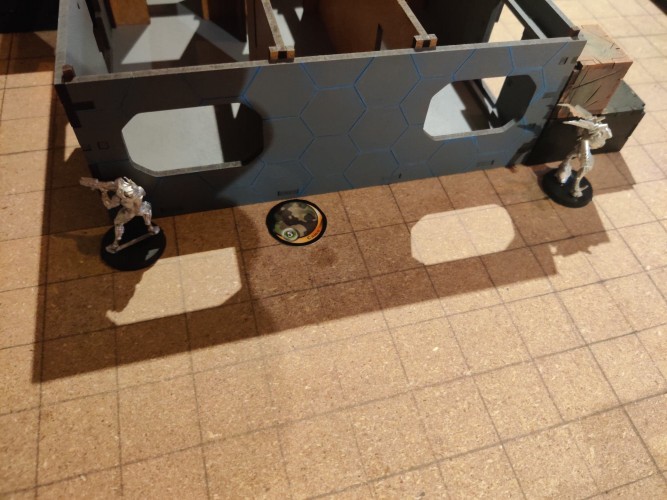 CA deployment: On the left flank of the CA dep zone, Combined Army deploys a Tensho FTO, a Shrouded and a Gwailo lieutenant. 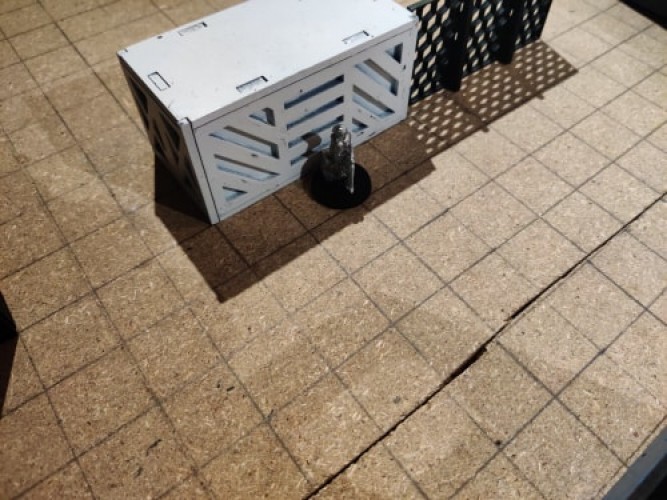 CA deployment continued: The CA HVT is deployed behind this crate. On the other side, a Zhencha deployed by Yu Jing is placed. 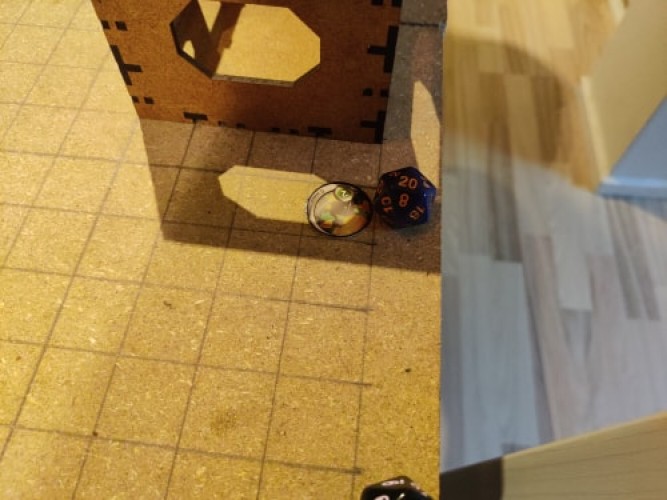 CA deployment continued: CA deploys a Caliban behind this building, but not in cover as it cannot reach it (exclusion zone). 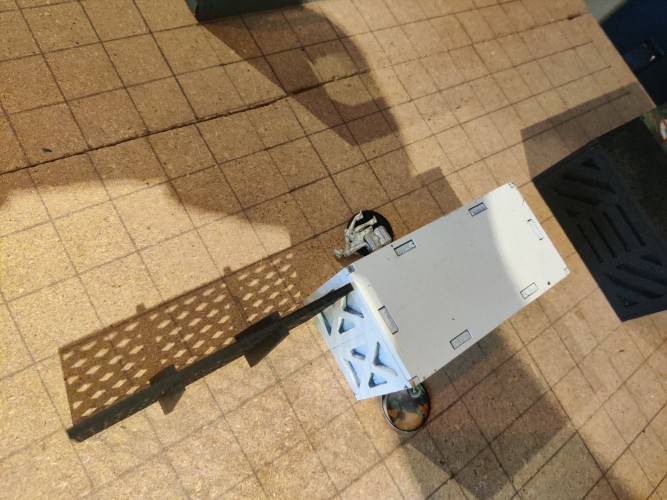 Yu Jing turn 1: Yu Jing decides to take advantage of the position of the enemy HVT and shifts the Shang Ji over to fire. Though it isn’t a favourable shot, he has three shots total, and hits with 2. The HVT is thus killed by the Yu Jing datatracker. 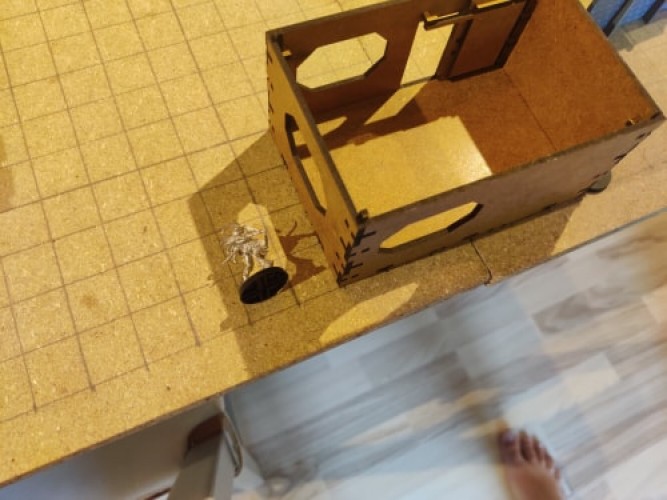 Yu Jing turn 1 continued: Next, the Yu Jing commander shifts over the Haidao Sniper to provoke and potentially discover the camo marker on the left flank. The Camo marker reveals as a Caliban and fires a light rocket launcher at the Haidao but misses. The haidao then peeks from cover, shoots and kills the Caliban. The Haidao is then moved to attempt and discover a camo token and succeeds, revealing that it was nothing (ambush-thing from Caliban). 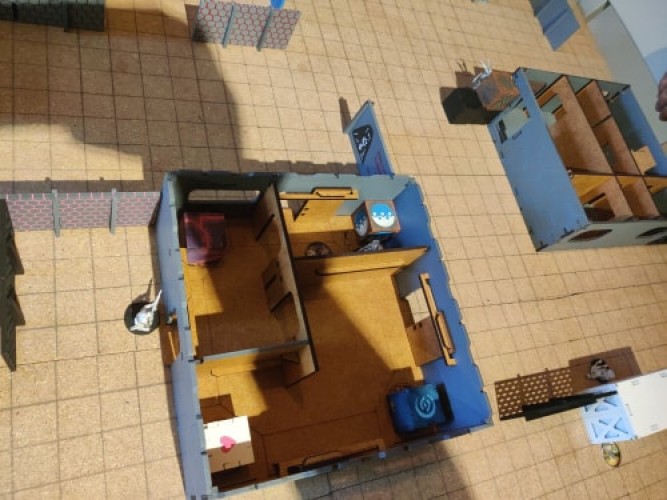 Yu Jing turn 1 continued: The Yu Jing commander then moves Wild Bill (Contender) to the building in the middle to discover and potentially shoot the camo marker. The camo marker reveals as a “Shrouded Hacker” and deploys an anti-personnel mine, not opposing Wild Bill’s MULTI Pistols and though they hit home, armour took it.

Combined Army turn 1: Combined Army begins by moving the Gwailo Lieutenant up the board to target the Shang Ji without cover, but is intercepted by YJ’s camoed Zhencha FO and the Zhencha FO got wounded. The Gwailo Lieutenant proceeds to move out of sight for the Zhencha and still able to shoot the Shang Ji with a Heavy Rocket Launcher and hits, downs but does not kill the Shang Ji. The Gwailo proceeds to shoot the Haidao as well, wounding it but not killing it. Thus, the Haidao is now in NWI. 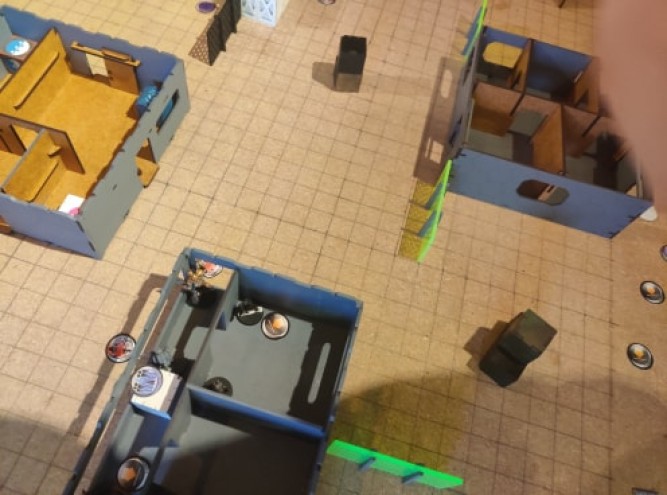 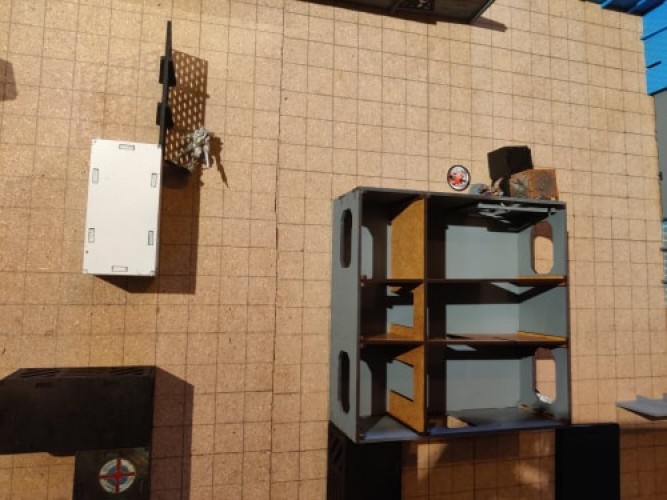 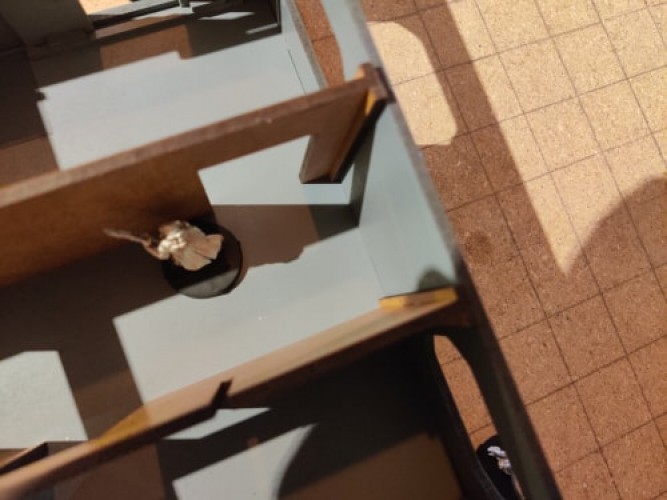 Combined Army turn 2: The Combined Army commander moves a camo token to outflank the Zhencha with a surprise boarding shotgun shot and the Zhencha survives, revealing a Shrouded (not hacker). Another attempt (this time not in marker state) kills the Zhencha. 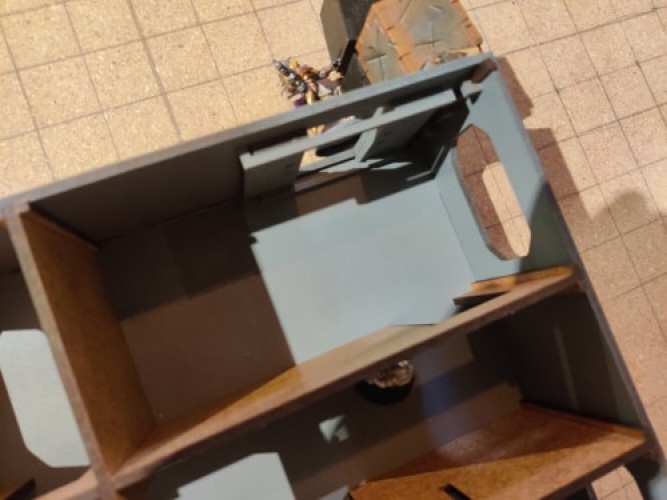 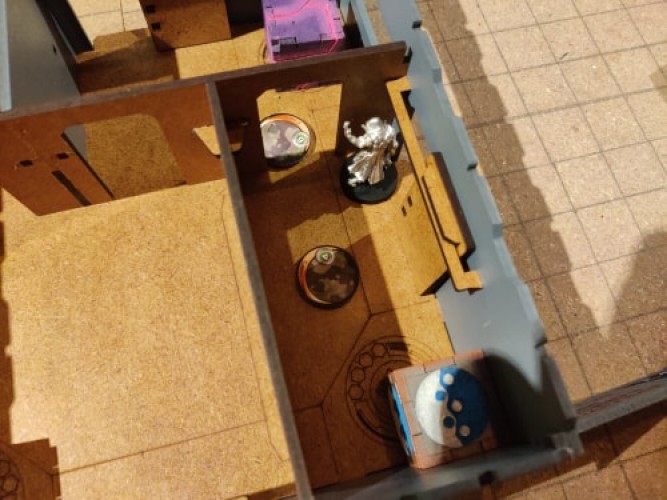 Combined Army turn 2: The Combined Army commander now moves the Shrouded Hacker to place another Anit-Personnel Mine, this time closer to Wild Bill. 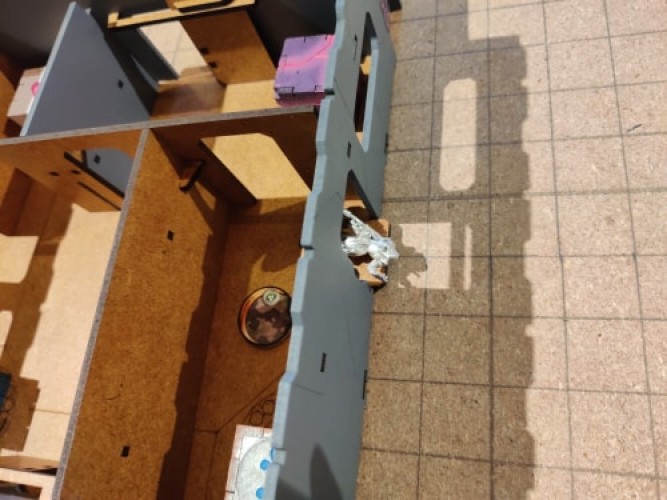 Yu Jing turn 3: The Yu Jing commander begins by utilizing Wild Bill as the sacrificial lamb to detonate the mine closest to him, in order not to have it in any way disrupt the follow-up. After Wild Bill dies to his wounds, the Haidao sniper wins the firefight with the Shrouded hacker and the Combined Army commander declares a surrender, as it no longer appears possible for him to win. Yu Jing claims victory, having both killed the enemy lieutenant, the enemy HVT (with their datatracker no less for more points) as well as killed more points overall.