Notes: Sorry for the mostly unpainted models. We also proxied a few models. Proxies are listed below. Lastly, the weird ladder-thing was treated as a saturation zone (modern art installation).

“So, finally a new mission and it is a patrol. Well, not great, not terrible.” Zhu Li thought to herself, as her train of thought was interrupted by an alert. “Be advised, Haqqislam units have entered your perimeter. Prepare to defend in case of hostilites.”

After taking defensive positions, Zhu Li started barking orders. “Zhang Wei, move up and get rid of that bot and whatever that guy up in the tower is!”
Zhang Wei duly complied, blinking through the many flashes, firing one shot from his Flammenspeer and several from his Spitfire, eventually succeeding. “If I move into the building I might get another one!” He thought to himself in an upbeat mood. He attempted it, but it did not pan out. “Wait.. This is not a great position. I should retreat to better cover before they choose to advance and I get outflanked and gunned down!” With that settled, Zhang Wei retreated back in sight of his comrades and in cover.

“I will get us another one!” Tai Sheng exclaimed over the comms, running up to cover behind some crates and firing twice at the Fanous bot in front of him. The first shot didn’t have any effect, but the second disabled the bot.

The eager atmosphere was cut short, when a Tuareg appeared out of nowhere and unloaded into poor Tai Sheng. He never stood a chance. Before Zhang Wei could even react, the very same Tuareg moved and shot at him from behind. He wasn’t hit and was now facing the Tuareg, but it kept firing! Zhang Wei too slumped up against the wall, victim to the unexpected infiltrator.

Chang Kai was sitting behind a crate when something he couldn’t quite identify fell in front of him. He knew something or someone was on the other side of the crate. Rather than potentially trigger whatever this thing was, Chang Kai moved the long way around the crate and fired into what turned out to be another Tuareg! It didn’t hurt the f**ker and he placed down another thing. “That has to be a mine…” Chang Kai concluded. “Well, we need him gone!” Chang Kai moved out, getting the wind punched out of him by the impact of the mine, but the armour he wore saved his sorry ass. What made things better was the fact that the Tuareg received a shotgun blast to the chest and was now lying on the ground. “Seriously… F**k you whoever you are!”

“On to the next poor sod that isn’t on my side.” Zhang Wei continued, moving into cover behind a billboard and peeking out, shooting and downing a Ghulam behind a shipping crate. “Good f**king riddance.”

“So, that f**ker that took out Tai Sheng is below me.” Sun Zhen considered. “Not great range, but I have the high ground. Alright, let’s do this!” He moved up to the edge of the roof, peeked out and unloaded into the Tuareg on the walkway without restraint “SUCK IT YOU SNEAKY BASTARD!” He shouted as Tuareg ceased moving.

“Taizong, can you get rid of their long range capabilities?” Zhu Li asked. “Oh, definitely” came the reply, followed by six shots. Most went wide, but enough struck the Khawarij that he ceased to be a concern.

Suddenly, a barrage of grenades rained down on Chang Kai, but he escaped unscathed. He wasn’t so fortunate with the shots from the Namurr that just outflanked him though, and Chang Kai went down.

“Move in on their HVT Sun Zhen!” Zhu Li commanded. “I will move in on the Namurr to keep him off you!” As Zhu Li rushed forwards, she fired twice and a shot clearly hit the Namurr, but it retreated further behind cover. “Well that just won’t do!” Zhu Li thought to herself. “Best keep going”. And with a quick flanking maneuver and two shotgun shots, the Namurr was dead.

“Everybody fall back! We give a bit of ground and regroup. If they continue their advance, we will grant them many more casualties!” Zhu Li commanded, ordering an orderly retreat. 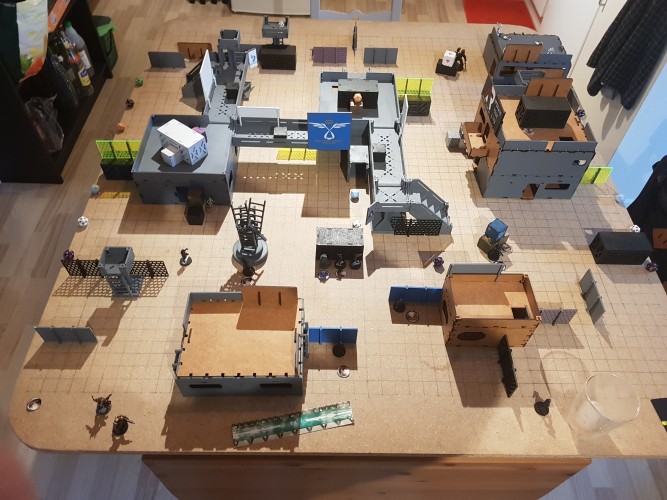 The board as viewed from the Yu Jing side. 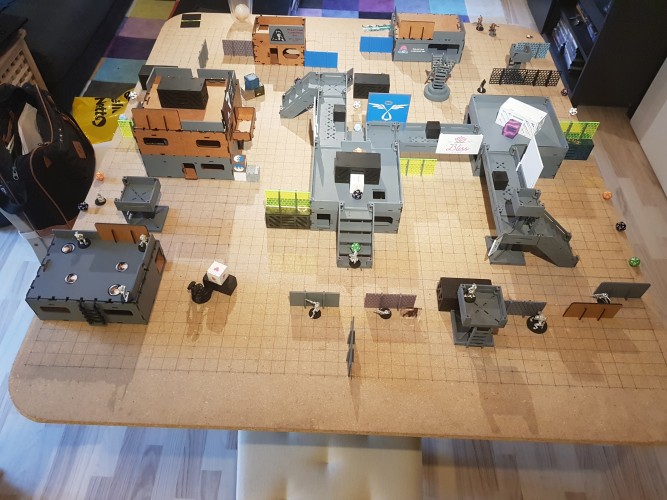 The board as viewed from the Haqqislam side 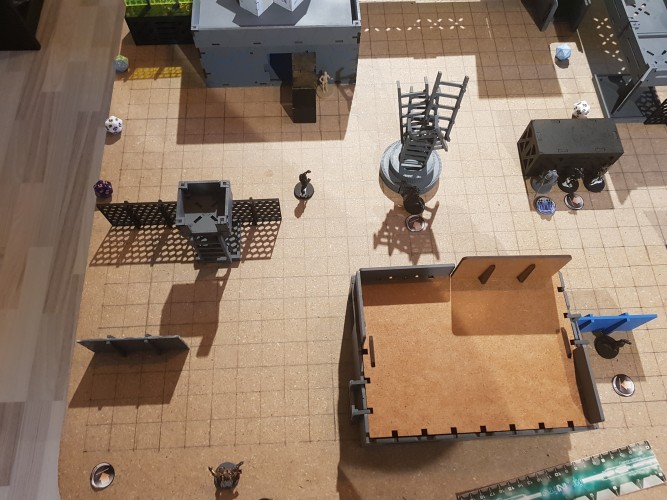 Haqqislam wins the roll-off and takes deployment, making Yu Jing deploy first. Yu Jing thus takes first turn. On Yu Jing's left flank, the HVT (C3PO) the Mowang NCO (Zhanshi Goncheng model) and a fireteam consisting of Zhanshi and a Haidao sniper (actual models) can be seen with only one Zhanshi missing. In the lower right corner of the picture, a Zhanshi Yisheng (actual model) can be seen. On the roof of the grey building in front behind the white shipping container, a camo marker (Zhencha Boarding Shotgun) is deployed. 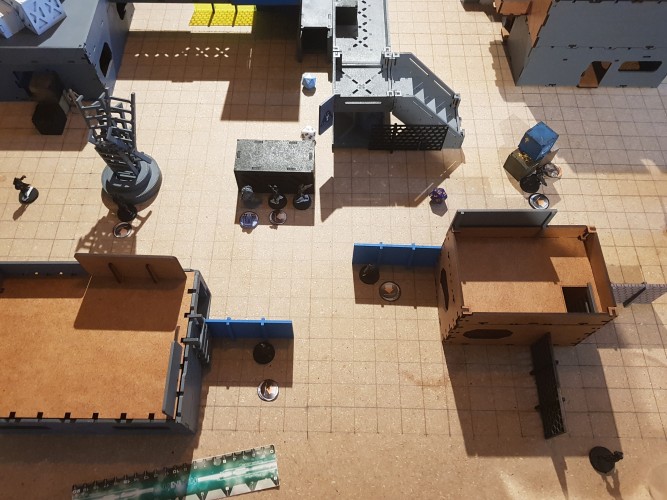 Yu Jing deployment continued: In the middle, the entirety of the fireteam can be seen, as well as Tai Sheng (Xi Zhuang) and a camo marker (Daoying Lieutenant) can be seen on the right. 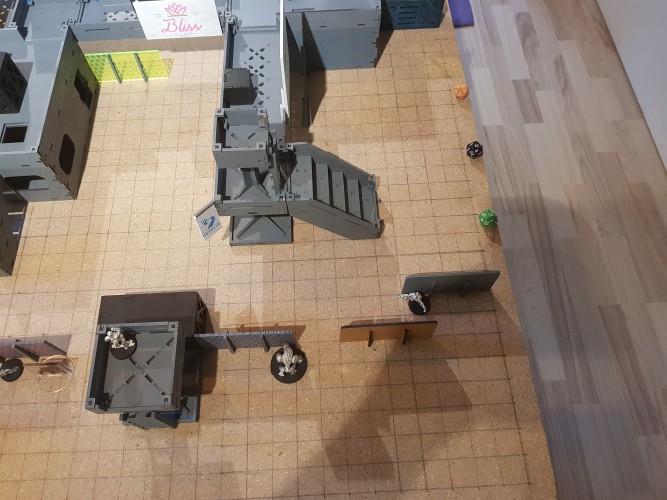 Haqqislam deployment: On Haqqislam's right flank, two Fanous remotes, a Namurr and a warcor on a tower are deployed. 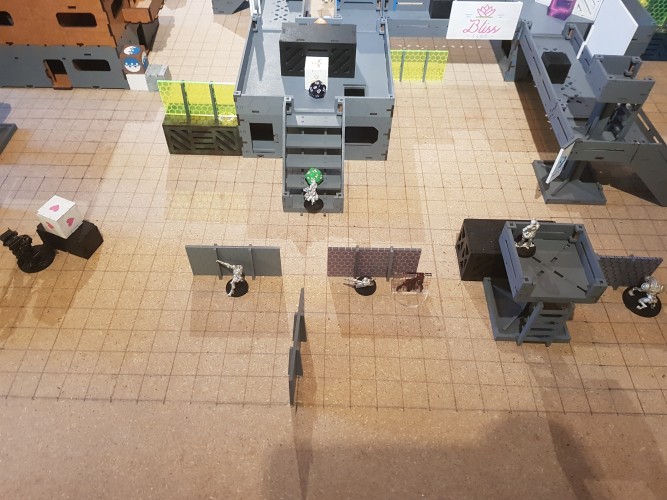 HqI deployment continued: In the middle from the right to left, a Fanous remote, two Ghulam NCO's and the Namurr datatracker are deployed. 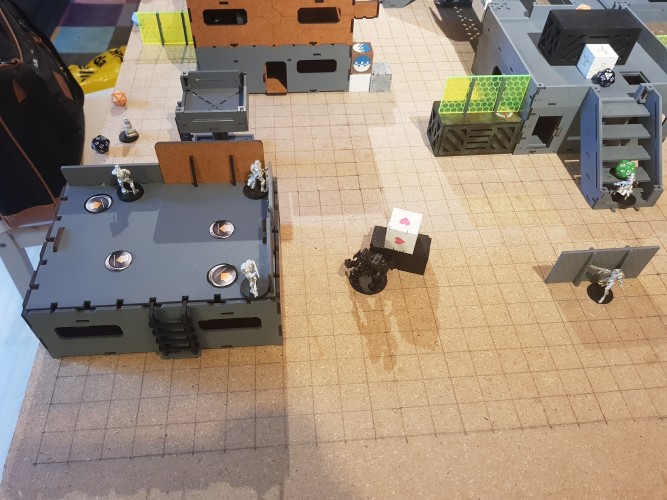 HqI deployment continued: On Haqqislams left flank, the Namurr datatracker can be seen on the right with another Fanous remote in the middle and a fireteam in the building on the left consisting of a Khawarij Mk12 (standing on the roof), three ghulams (doctor, FO and Lieutenant) with two on the roof and one in the building and lastly Leila Sharif also in the building. The Haqqislam HVT (Free-lance Stringer) can also be seen in the picture. 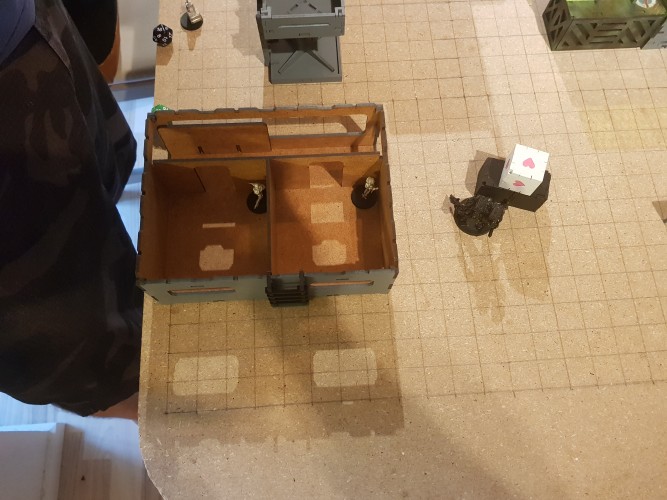 HqI deployment continued: The Ghulam and Leila Sharif in the building as previously mentioned. 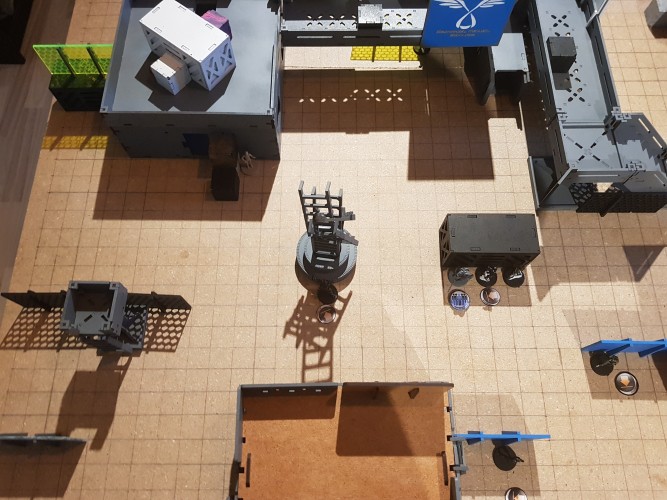 Yu Jing turn 1: The Yu Jing commander begins by moving the Mowang up to successfully shoot the warcor and Fanous peeking on the passage under the walkway. The Mowang tried to shoot at the Fanous on the far left flank, but failed. 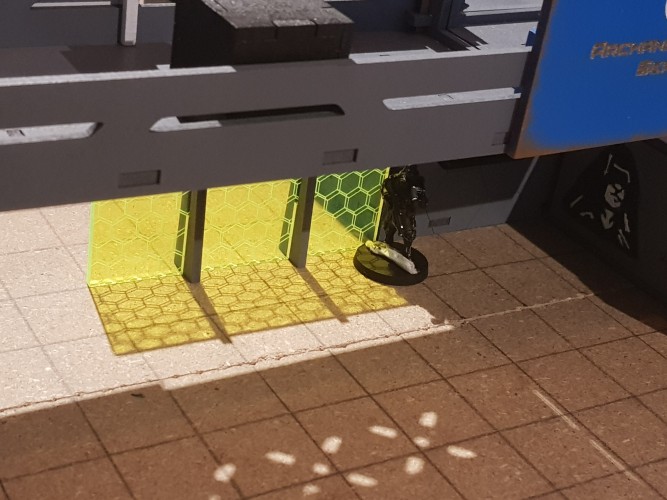 Yu Jing turn 1 continued: After the attempt to shoot the last Fanous remote, the Mowang is withdrawn to better cover and closer to his comrades. 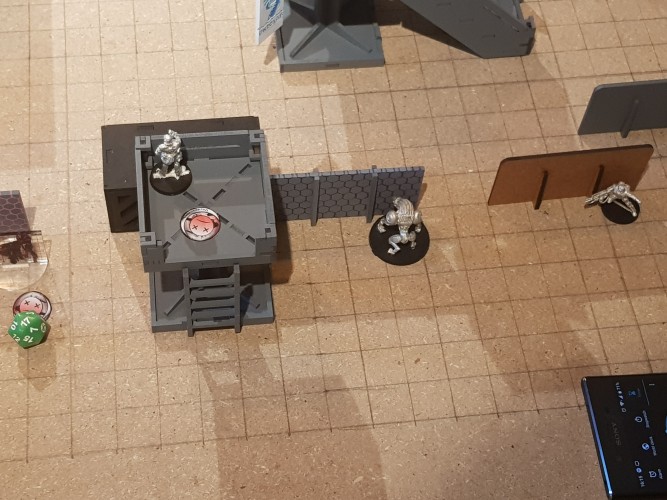 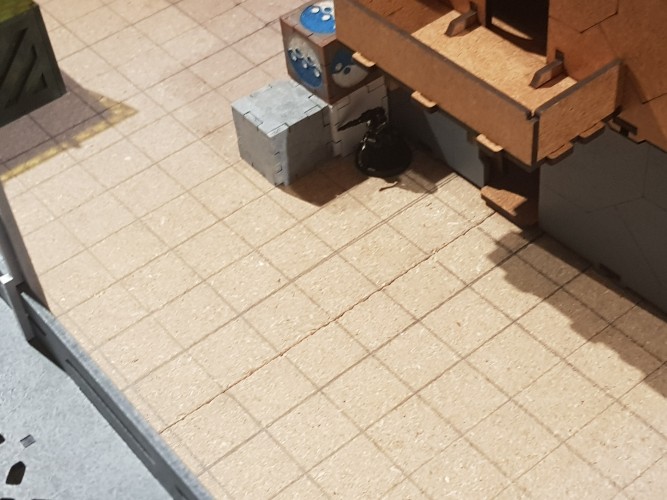 Yu Jing turn 1 continued: The Yu Jing commander moves Tai Sheng further up towards cover, after which two orders are utilized to have Tai Sheng down the Fanous remote in front of him. 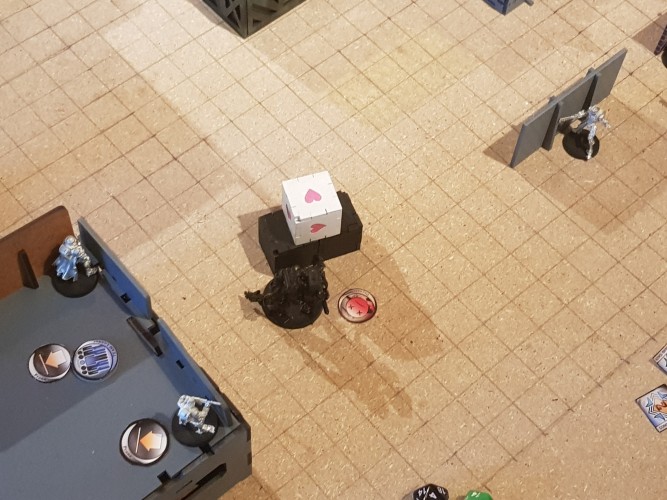 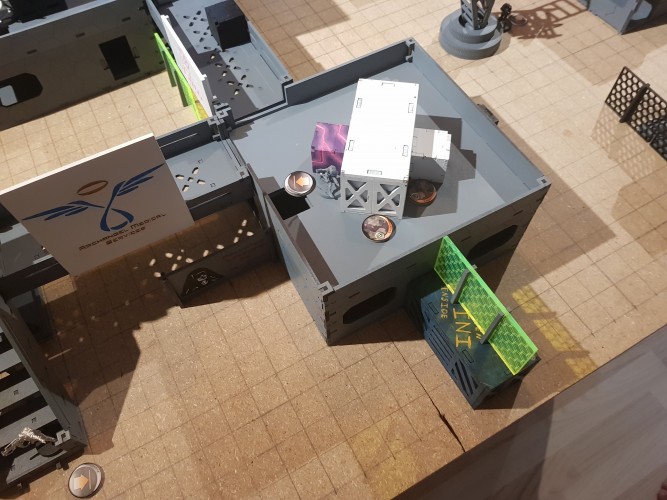 Haqqislam turn 1: The Haqqislam commander reveals a TO-camo Tuareg who deploys a mine to try and pin down the Zhencha in camo state. 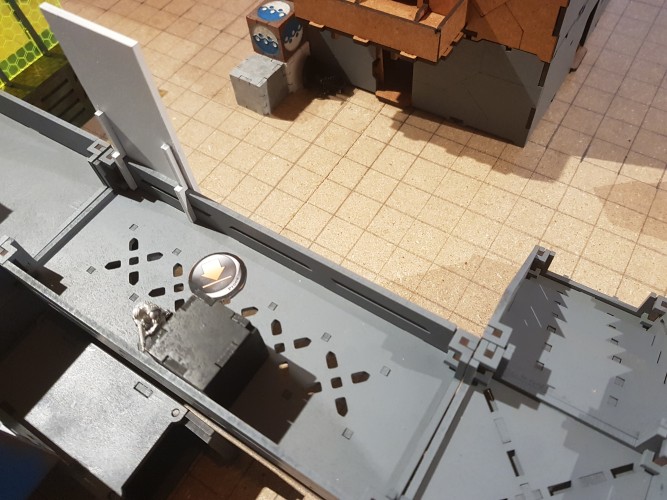 Haqqislam turn 1 continued: Another Tuareg is revealed and fires a suprise shot at Tai Sheng who survives. He survives one more barrage, but the third kills Tai Sheng. The Tuareg moves over and targets the Mowang, who also is killed after a few attempts, after which the Tuareg goes prone. 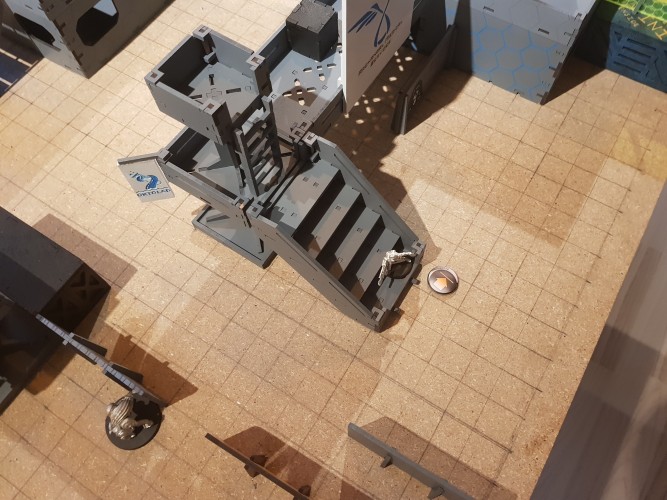 Haqqislam turn 1 continued: The Haqqislam commander chooses to move the Namurr on their right flank further up the board to control more zones. 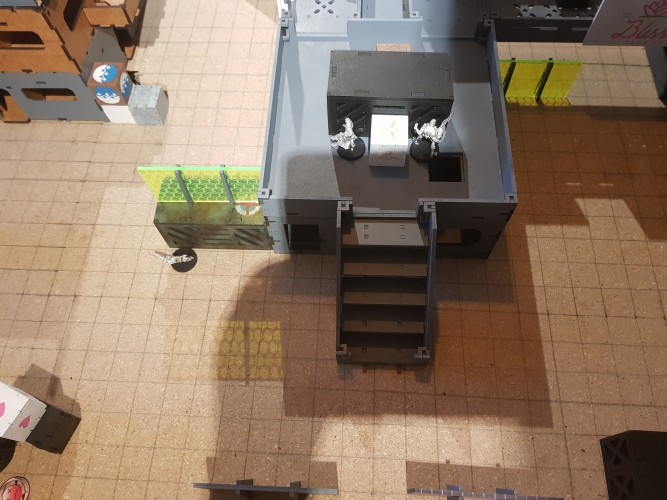 Haqqislam turn 1 continued: The Namurr datatracker and the two Ghulam NCO's are moved up as well, again in order to control more zones. 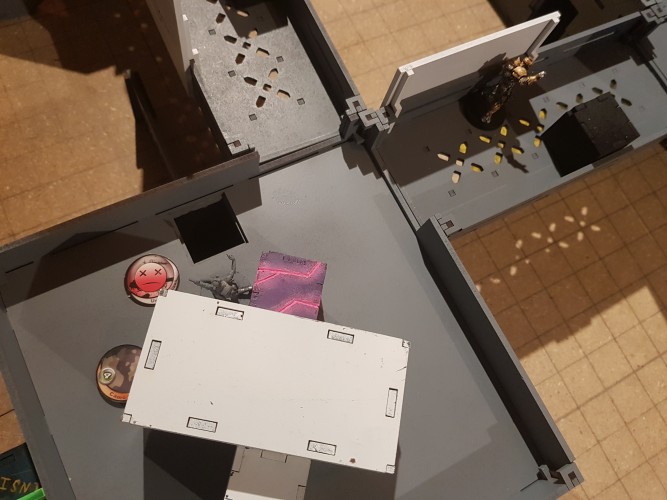 Yu Jing turn 2: After the other Zhencha with SMG successfully kills the Tuareg on the walkway that killed Tai Sheng (unfortunately not pictured as we forgot to take a picture of it), the Yu Jing commander manages to take the long way around the shipping container without triggering the mine and without getting spotted and makes an attempt to shoot the Tuareg. It fails, and the Tuareg deloys another mine. After a second attempt, the Zhencha successfully downs the Tuareg and survives the mine. The Zencha is then moved to better cover. 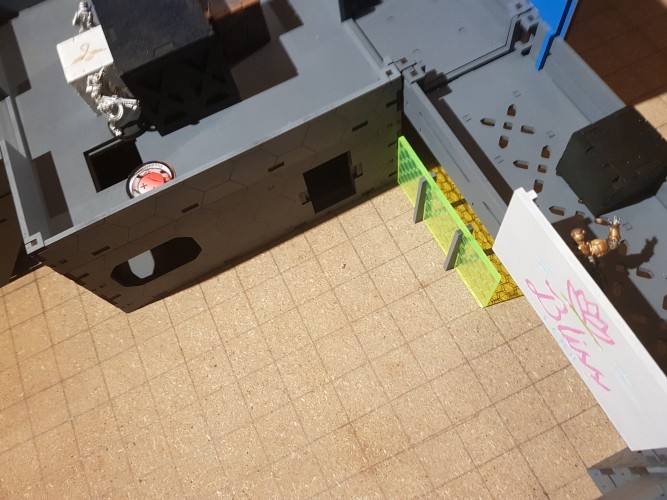 Yu Jing turn 2 continued: The Zhencha now takes a shot at one of the Ghulam NCO's after moving to better cover and successfully downs it. 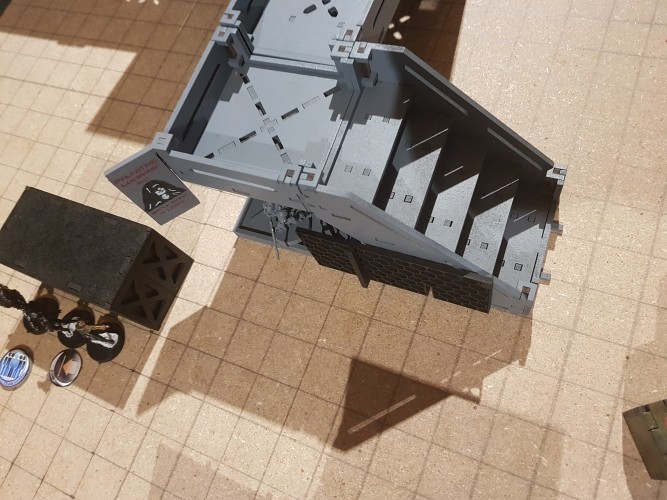 Yu Jing turn 2 continued: After the Zhencha's success on Yu Jing's left flank, the Haidao-Zhanshi fireteam is moved up and after two attempts, successfully kills the Khawarij HMG. 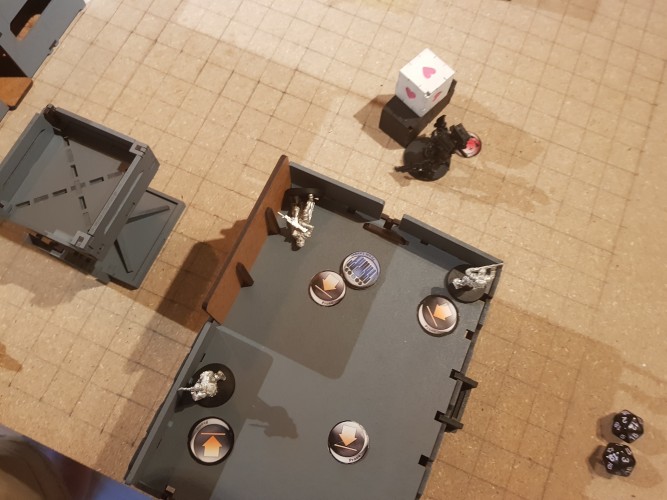 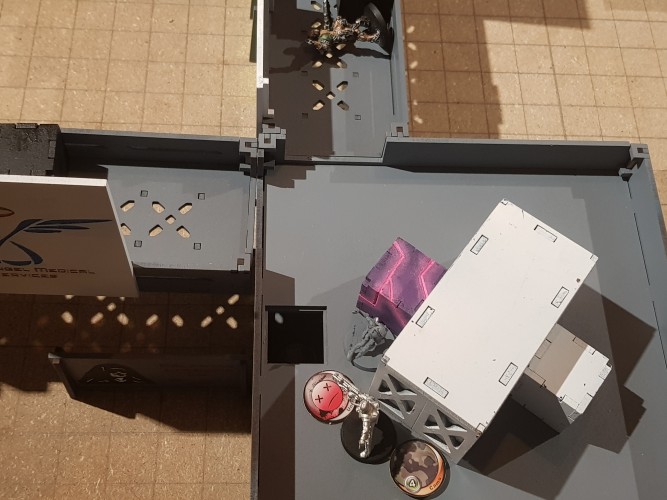 Haqqislam turn 2: The Haqqislam commander spends just about all of his orders to try and kill the Zhencha, first with the remaining Ghulam NCO firing many a grenade, and finally with the Namurr on Haqqislam's right flank moving up and outflanking the Zhencha, killing it. 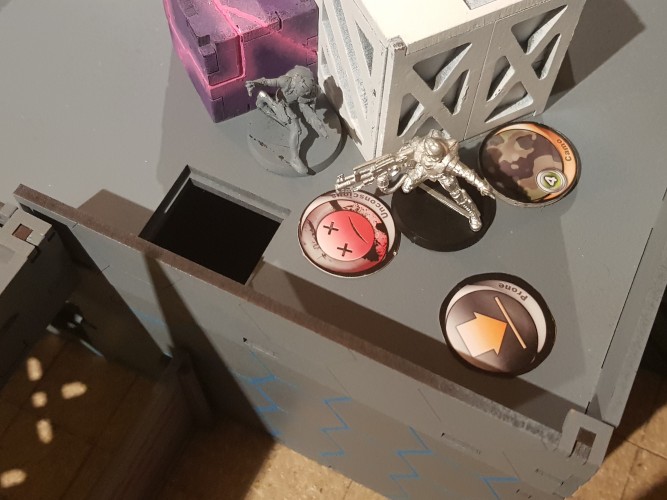 Yu Jing turn 3: After moving up the Haidao-Zhanshi fireteam, the Haidao fires at the Namurr who is hit, but the armour save is successful. the Namurr then moves further into cover.

Yu Jing turn 3 continued: The Yu Jing commander then uses an order to move the Zhencha FO with SMG within 8 inches of the enemy HVT, preventing Haqqislam from securing the Yu Jing HVT, which the Namurr on Yu Jing's left flank (Haqqislam's right flank) is within 8 inches of as well. 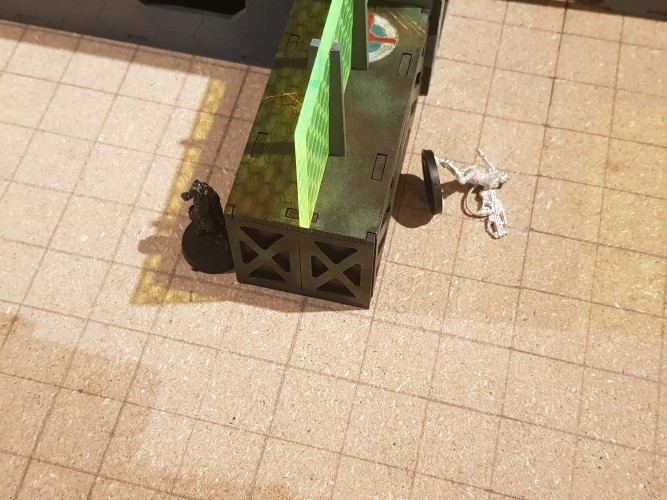 Yu Jing turn 3 continued: To prevent Haqqislam from winning with too great a point ratio, the Yu Jing commander moves up the Daoying lieutenant to shoot the Namurr datatracker on Yu Jing's right flank. The first salvo wounds but does not kill the Namurr, so the Daoying is moved further up and finally kills the Namurr and moves back into cover. 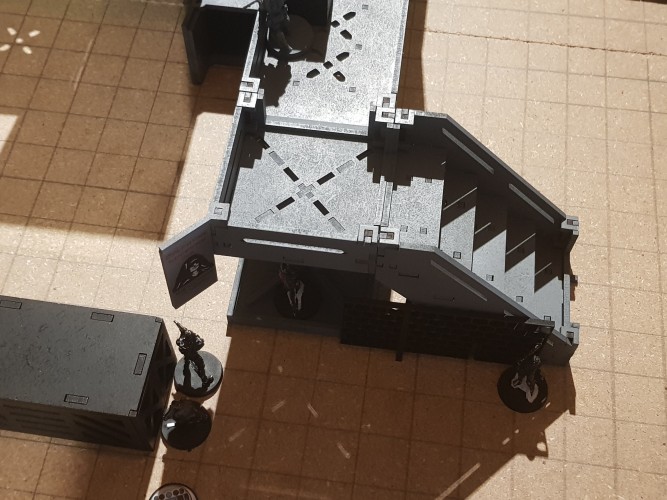 Yu Jing turn 3 continued: The Yu Jing commander utilizes his last order to reposition the Haidao-Zhanshi fireteam to better cover in preparation for the upcoming Haqqislam turn. But it does not come, as the Haqqislam commander would rather not risk his win by moving any units and passes his turn. Haqqislam thus wins 5-3 (though Haqqislam lost both more army points and units than Yu Jing).