Fought At The Gorge: Arachne Node
201 days 14 hours 3 minutes ago

Notes: Sorry for the unpainted models. We also proxied a few models. Proxies are listed below.

Aleph forces hear a gunshot and immediately deploy for the possibility of hostiles, with the Shukra lieutenant Tanvi situating herself at the center of the Aleph formation and the rest of the Aleph patrol spreading out. Danavas hacker Saatvika then moved to the nearest Arachne transmitter on the left of the formation along with Lamedh Rebot Unit-1262 for use of the network against the potential hostiles.
On the right of the formation, Proxy Min Lee advanced forwards, moving the bodies to the nearest Arachne transmitters, with one body remaining at a transmitter alongside Deva Aashi, one advancing further towards where the gunshot was detected and one moving to an unsecured building on the right flank.

Deva Aashi is then recorded as noting the hostiles as consisting of a significant contingent of heavy infantry, implying that these “hostiles” were Yu Jing forces, or Shasvastii.
Lastly in term of the patrol’s deployment, a team of Dakini tacbots and a CSU employee were stationed adjacent to the Deva Aashi.

First contact with the unspecified hostiles was with Proxy Min Lee, who spotted a civilian whom is described as a “wanted criminal” although no records have been obtained with any details concerning identity or similar. Proxy Min Lee utilized an EM-grenade to try and isolate the individual and notes hearing two audible responses to the detonation of the grenade, whilst opening fire on the unidentified civilian before advancing further.

Shortly thereafter, Danavas hacker Saatvika reported a heavy infantry unit within her hacking range whose communication equipment Danavas hacker Saatvika subsequently disabled.
The report then notes that Shukra lieutenant Tanvi ordered Dakini tacbot Unit-1240 to open fire on the enemies in sight with its HMG, achieving a confirmed kill on a “Zhanshi”.

The bodies of the fallen “Yu Jing” units were identified as units that, after a search, were determined to be KIA in a recent incident in an establishment on Novyy Bangkok, “Harry’s Bar”. The obvious implication being that these supposed “Yu Jing” units were in fact Shasvastii infiltrators, and the fact that Aleph has not publicly accused Yu Jing of illegal operations in regards to this patrol would indicate that is the case, or at the very least that Aleph also believes these “Yu Jing” units to have been Shasvastii infiltrators.
Clearly, screening protocols and ID security requires an overhaul to prevent any negative consequences from infiltrators assuming the identity of our good and noble armed forces. 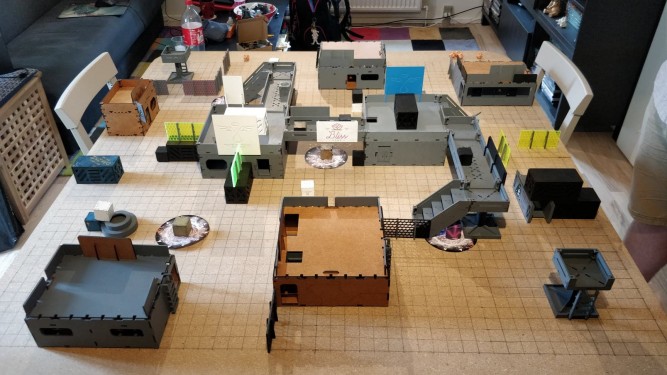 Initiative and Deployment: Winning initiative, Aleph opted to go first. Yu Jing assigned them this side of the board. Note: We used crates to be the antennas and placed some templates underneath to represent the zone for contesting. 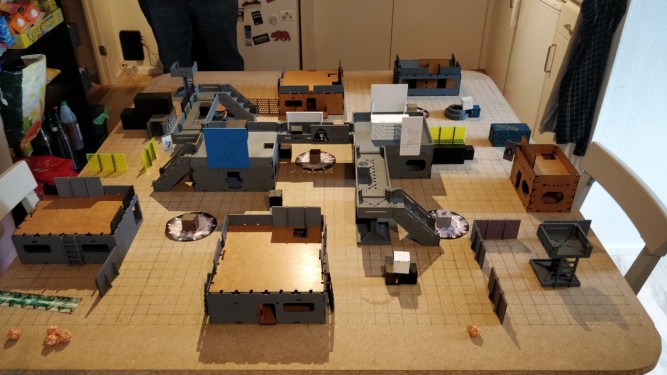 Having chosen for Aleph to take the other side of the board, this is the side that Yu Jing selected. 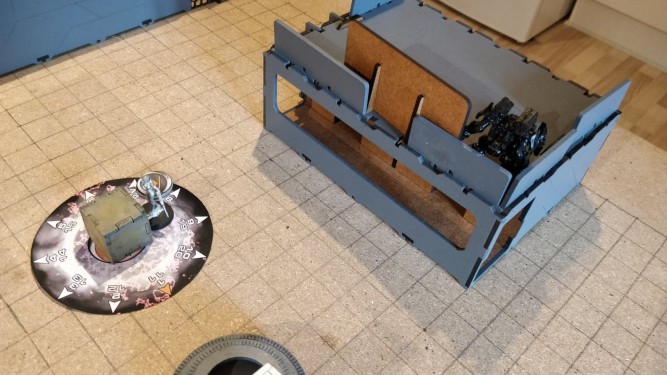 Aleph's left flank deployment was arranged so the Danavas started prone next to the antenna, so as to tap into the repeater network, and the Lamedh was sitting in a spot overlooking the firelane on Aleph's left flank. 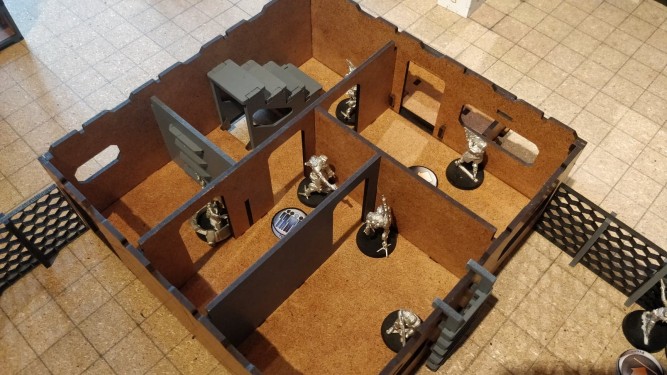 In the center, Aleph deployed the fireteam core, consisting of the Deva Hacker (not pictured here), Dakini Sniper (Located on the second floor), Dakini HMG, Dakini LGL (Team leader), CSU. In addition, a spare Dakini was deployed to fill in losses and a Sophotect to also deal with losses. 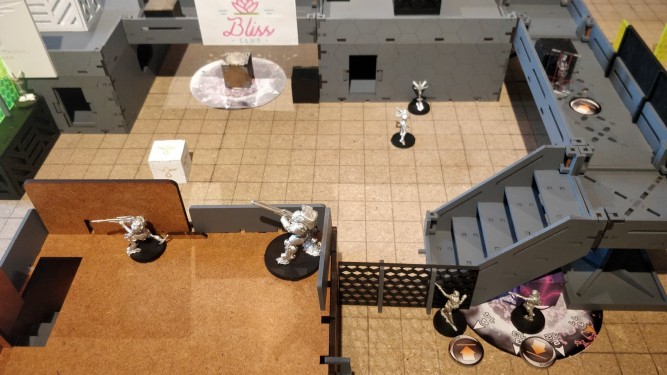 Here the missing Deva and Sniper from the last picture is visible. The sniper was deployed in full cover, along with the second Lamedh to help cover the middle fire lane, and the deva was deployed down by the stairs prone, so as to hold the antenna and be in the repeater network. Lastly, Dart was deployed on the catwalk to move up and provide support for forward movement. Lastly the Proxies were held back for deployment. The MK. 1 Hacker was deployed helping cover the right antenna and the MK. 5 (named the Datatracker) behind the right, middle building. 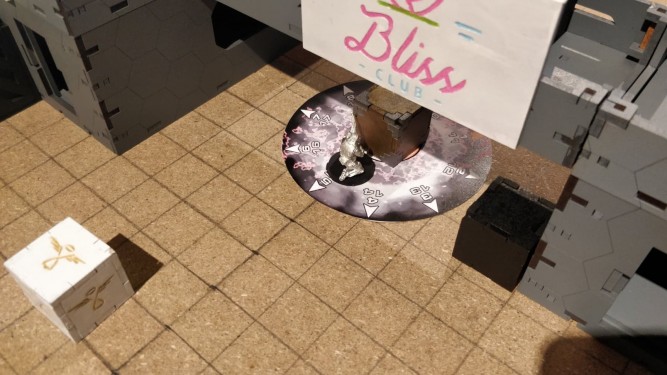 The Proxy MK. 2 Hacker was hidden deployed to the center antenna to secure it should Yu Jing hold an advantage in antennas. The HVT (not pictured) was deployed behind the building on the left and was promptly forgotten. 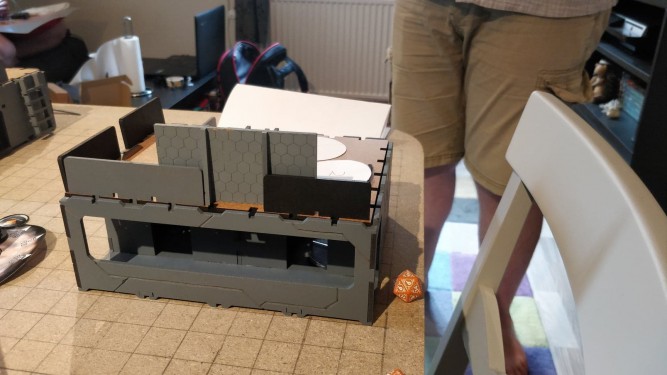 On yu Jing's left flank, a Lu Duan in holo echo was deployed. The one on the bottom floor is the real one. 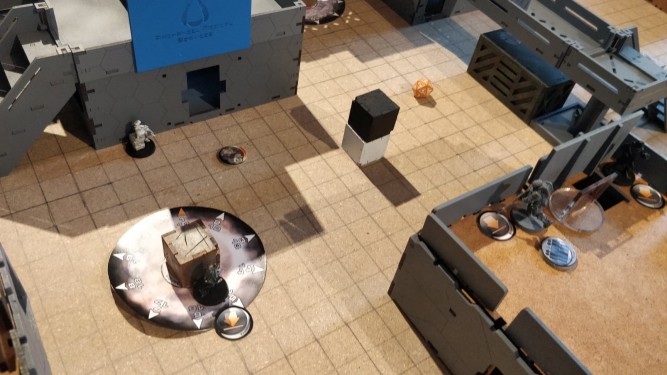 In the center of their side, Yu Jing deployed their Daoying Lieutenant forward, just behind the building to the left and with the HVT there as well. Behind the left antenna sits a Zhanshi Forward Observer prone. On top of the center building is the rest of the Fireteam Core. Leading the team is the Haidao Sniper prone, a Son-Bae Yaokong behind full cover to provide fire support via guided fire, and a Zhanshi Paramedic to help keep the Haidao alive. In the doorway to the bottom left, a Zhanshi Medic is located in the team (not pictured.) 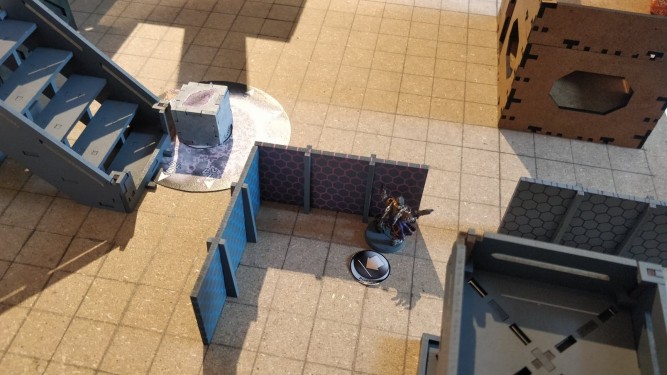 On the right side of the board, Yu Jing placed a Mowang (Named Datatracker) was placed in total cover across from the Aleph HVT, and a Hac Tao Hacker was placed against the antenna. (Not pictured) 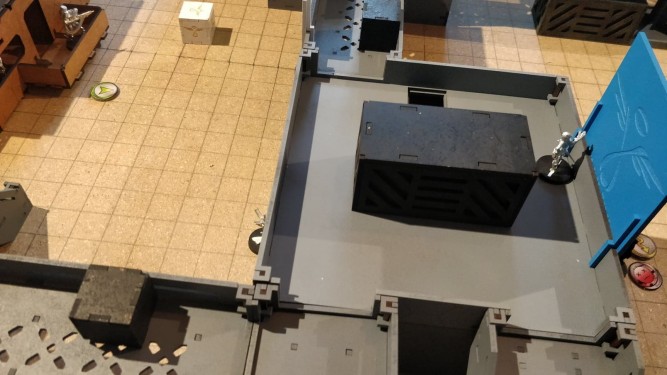 Aleph Turn 1: Aleph began by moving its Proxy MK. 5 Datatracker through the right side building. Upon getting line of sight, from inside the building, she used an E/M Grenade on the HVT, catching the camouflaged Daoying. Both become isolated as a result. Following up, he kills the HVT with his dual SMGs. With the ball rolling, Dart pushed up across the catwalks to the top of the middle right building, and uploading fire into the Daoying, disabling her. With that handled she opens fire on the Zhanshi in cover behind the antenna, killing him outright. She then proceeds to use the remainder of the orders for group two, to try and E/M Grenade the YU Jing core on the roof across from her, but fails to land a hit. 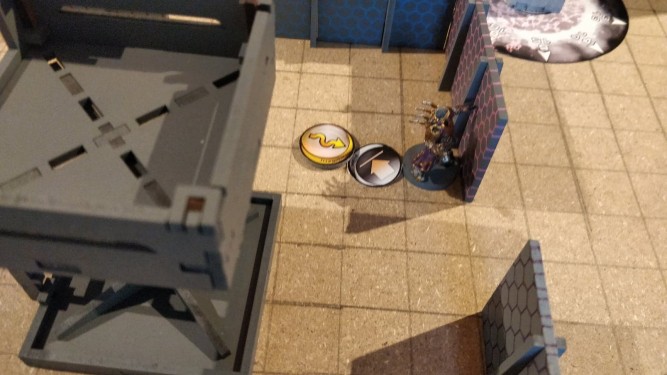 Seizing the advantage, Aleph then uses the Deva Assault Hacker to Oblivion the Mowang, and successfully leaves him separated from the rest of the Yu Jing forces. She then attempts to use Basilisk on him to completely disable him, but is ultimately unable to pull it off. 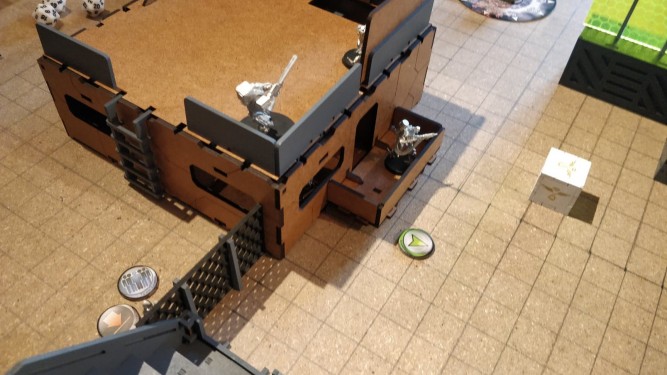 Seeing that Yu Jing has misdeployed the lower level Zhanshi PMedic out of cover and in line of sight, due to the Yu Jing commander not realizing there was no wall there. The Dakini HMG proceeds to kill this second Zhanshi Paramedic. 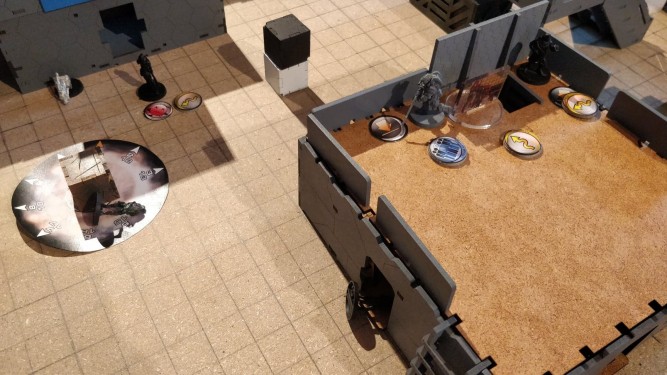 Lastly, the Proxy MK. 5 pokes out and drops a single E/M Grenade on the remainder of the Yu Jing core, and isolates the Son-Bae Yaokong and the third Zhanshi Paramedic. Losses from previous attacks shown in this picture as well. 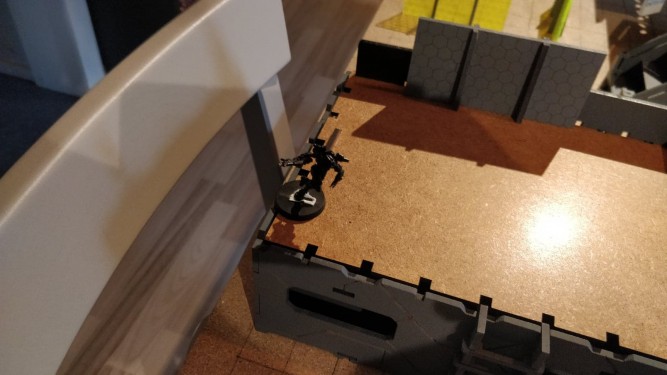 Yu Jing turn 1: Contemplating the very meaning of his existence at this point, as well as wondering why he ever agreed to play against OSS on transmission matrix, the Yu Jing commander knows most of his team is disabled at this point and is in loss of lieutenant. As a result, the Yu Jing player becomes desperate/despondent and attempts to drop the Liu Xing on Dart to seize a kill. He fails his attempt and scatters to land on top of the building next to the Lu Duan holoechos. 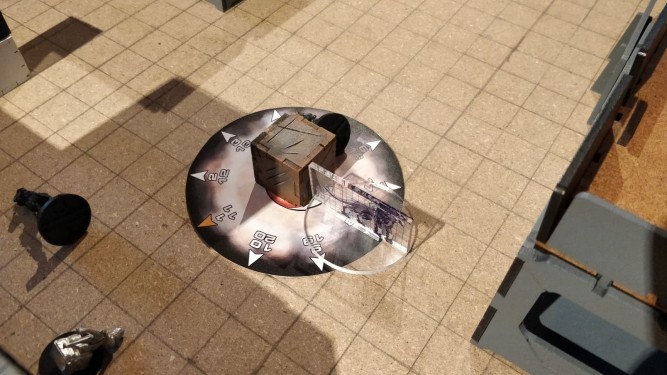 The Yu Jing commander then moves the Lu Duan in an attempt to seize the antenna on the left flank and the Deva, Danavas, and Proxy Mk. 2 hacks the bot with Oblivion in response, easily isolating it. It still holds the antenna though. 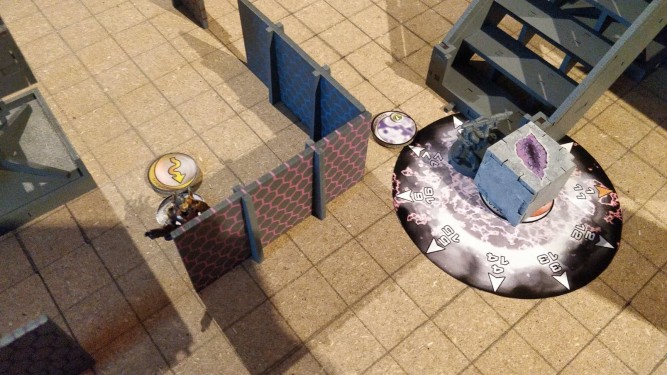 Exasperated at his luck, the situation he is in and contemplating why he is even playing (as well as why he is friends with this filthy Aleph player) the Yu Jing commander orders the Mowang to fire off a burst of fire at the lone Lamedh on the Aleph left flank, but ultimately fails, though he resists all the incoming hacks. He then reveals, but does not perform any action with, the Hac Tao to simply hold the antenna. 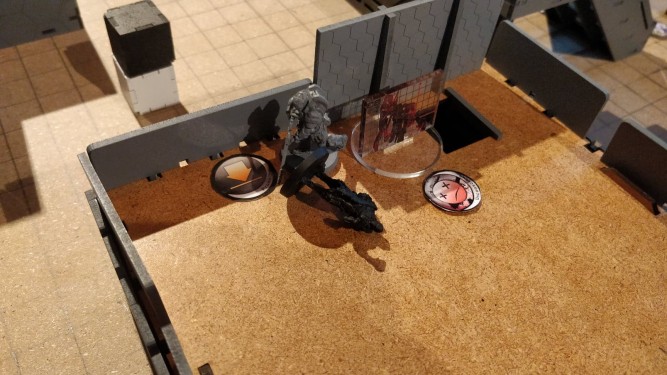 At this point, the Yu Jing commander makes a last ditch effort to recover, and runs the third (and last) Zhanshi Paramedic into the Dakini HMG's view to fire his medkit at the down Daoying, ultimately dying from the attempt, in addition to killing the Daoying. Just to hurt something, he then moves the Son-Bae Yaokong to try to blast the Dakini and Shukra lieutenant, but misses and is downed to return fire. With all his units besides the Hac Tao disabled or isolated, the Yu Jing commander declares retreat to his forces, ending the game.

Note on the ending: We ultimately couldn't figure out how he could recover, but didn't know how to handle a surrender. We ended up deciding it would be resolved as a 10-0 win. Sorry for the short report, but the dice, mission and Yu Jing commander were just not up for a longer game and the latter proceeded to ponder further as to the meaning of his existence and why he ever, EVER agreed to play against OSS on transmission matrix.