Operation Enduring Liberty: Not so invincible after all?

Quick heads up and clarification about the game:
Main purpose for me (except for proving Varuna might to those who still doubt) was to test mass camo list that i came up with few days before the game (spoiler: it sucks), also the upcoming tournament (for which the list had to be tested in a first place) was with Spec-Ops (12 exp) so we decided to play with them. 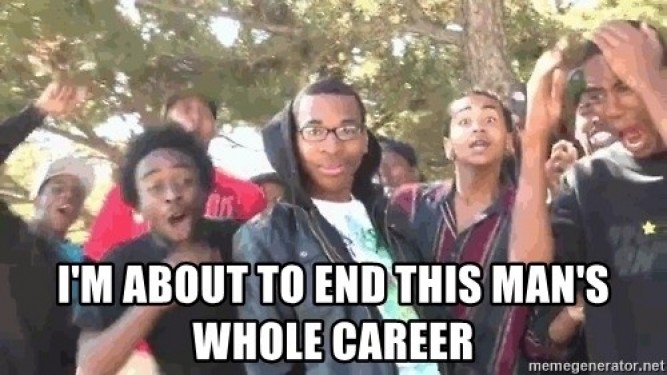 VIRD commander right before the game.

Glorious 12 WIP of our genius Fusilier Lt. this time was enough to win the initiative roll and to take full advantage of it choosing to go first. 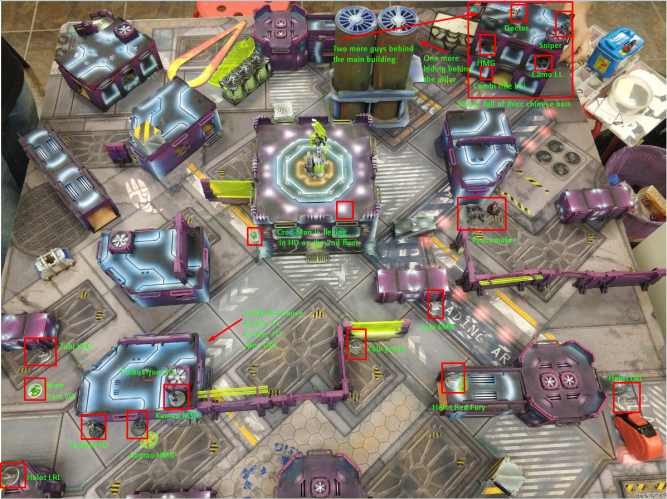 Echo-bravo, Haidao (thanks to Zero-G) and Liu Xing were chilling on the orbit... 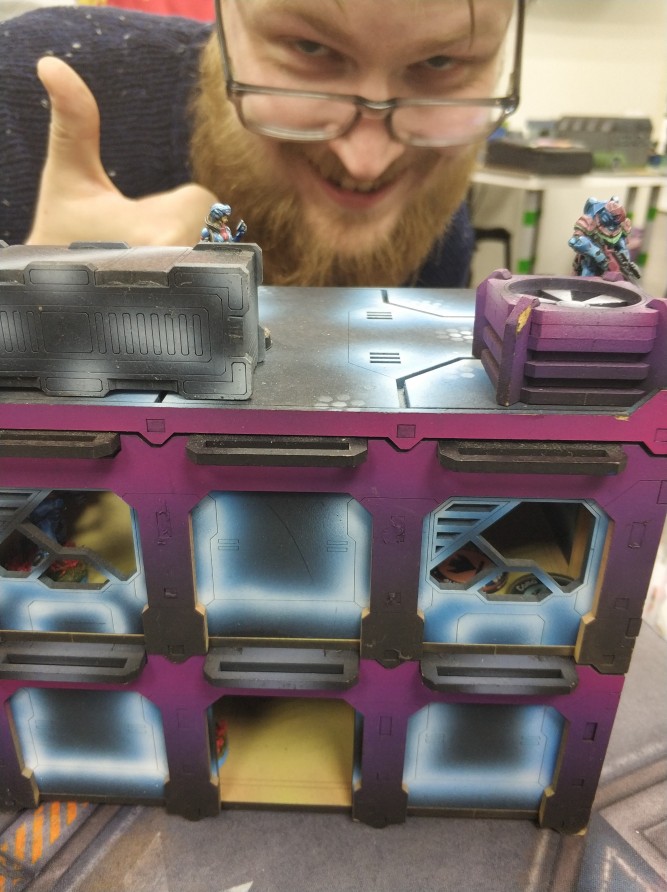 House full of Chinese firepower and their glorious commander whose career i was about to end.

There is not much to say about this game, mostly i destroyed my opponent with pretty awesome rolls, not just crits, but overall percentage of FTF wins was on my side. Approximately i won something like 80-85% of all FTF rolls.

Here are some photos of the game: 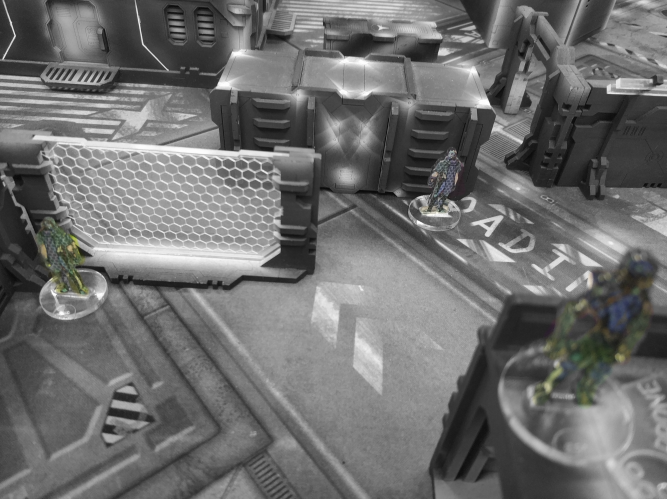 First attempt to flush those Chinese thicc bois form the house^
Auxbot did nothing thanks to my stupidity and died trying to burn IA personal from the house (who could have thought that those bastards can succed at rolling PH-12 rolls against the flamethrower, huh?).
Tip for the future #1 - FIrst kill a guy who holds the corner and can shoot with normall roll against your suicide auxbot.
After loosing his beloved auxbot Peacemaker gone full berserk and guns blazing (B2 lol) and killed himself at the Chinese fort called "Cool guys fort. No stinky PanO here". 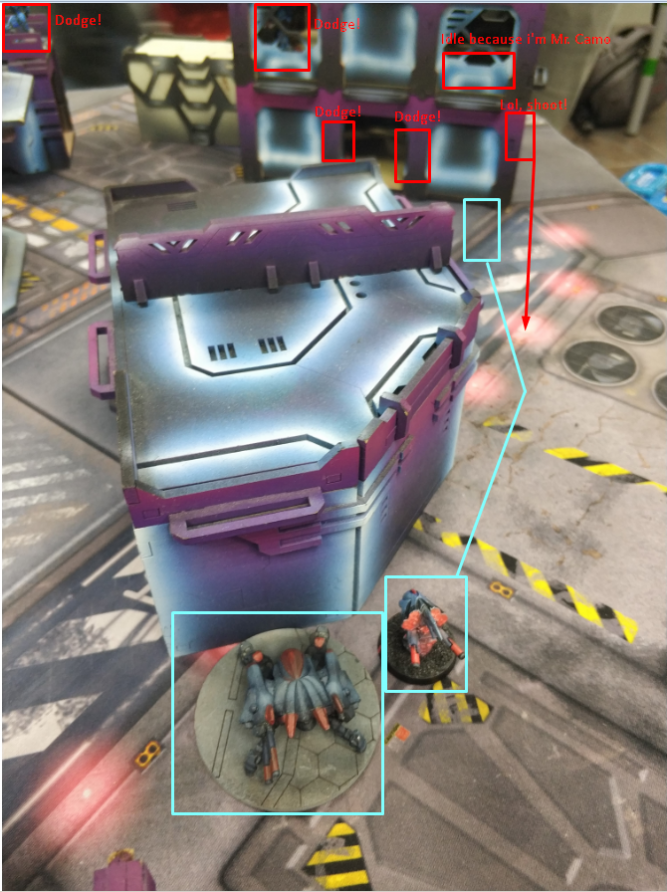 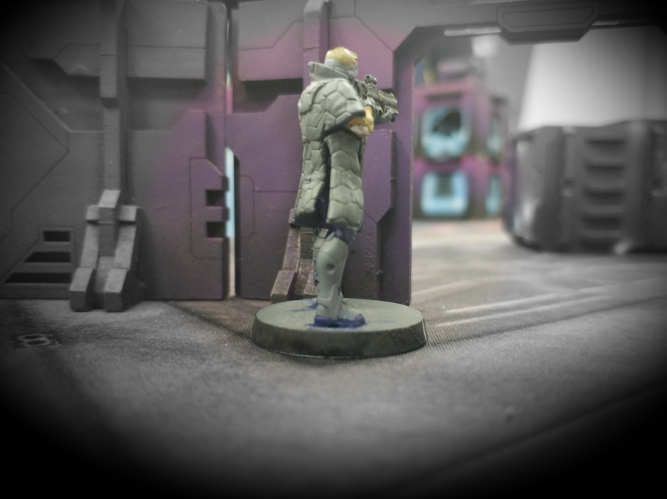 Zulu operative coming straight from the shadows to seize that sweet Regolith Plains special rule to his advantage.

Understanding that enemy Spec-Ops doesn't have any cover from the link team inside the house, Zulu with Shock Marksman Rifle used couple of orders to yell at him "SURPRISE MOTHERF*CKER!" and mow him down with a burst. 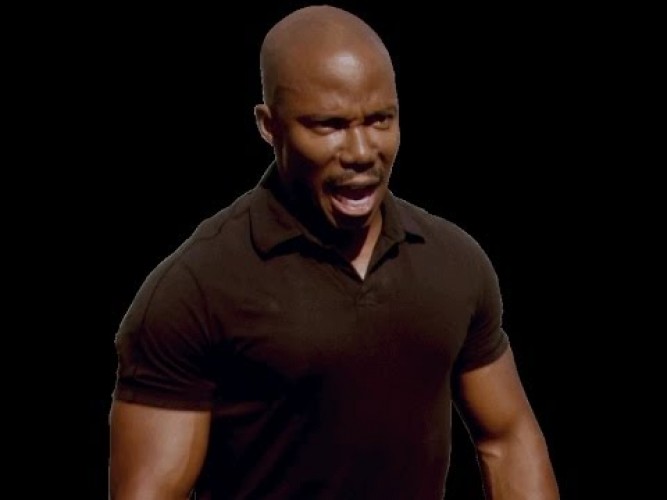 They say that you can not hear images.

As Zulu's group ran out of the orders (and targets that can be safely taken down) my own link team went into action - Sniper duel time!
Three D20s against two, IA vs VIRD, Red vs Blue, classical rivalry that ended with my opponent rolling 20 on both dices and getting obliterated by Kamau. One more win to the most "balanced" unit in Infinity. 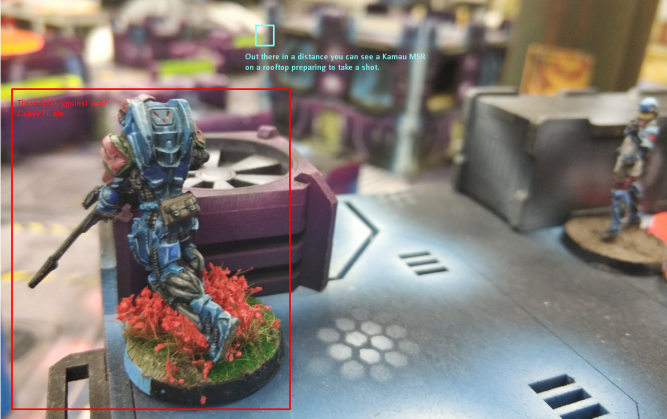 With that my turn ended. Journey was running out of options of what to do so he decided to take out my fearsome link with a "scalpel" (even though he looks more like a hammer to me) and dropped down the Liu Xing. 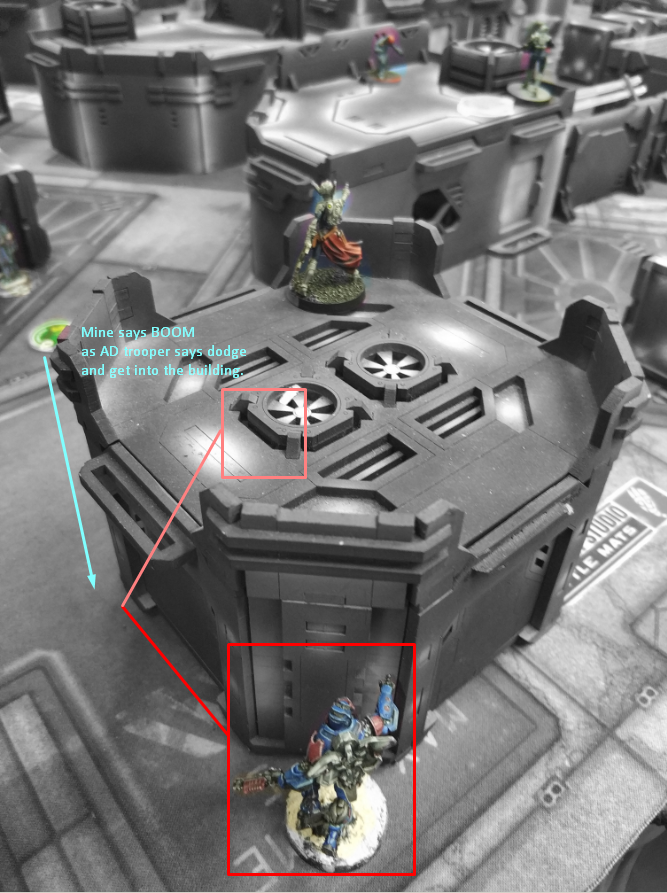 Succesfully landing, dodging the mine and getting safely inside the building. AD was a succes.

After that pretty stupid shootout took place - Liu Xing couldn't take down Fusilier FO who was standing near the wall, got into NWI state, but managed to wound Kamau HMG inside the building with a ricochet. Zulu KHD decided to take part in this and managed to finally take down IA's airbourne infiltrator.
After evaluating chances of his link team without a Haidao Journey pulled out of the airlock (zero-g and being on the asteroid, remember?) second Haidao (this time with Red Fury) and added him into the link.
That concluded IA's turn one.

During my second turn Zulu with SMR found out that Haidao with Red Fury is a great target for some critical hits and scored a second kill, clearing the angle of the building once again. 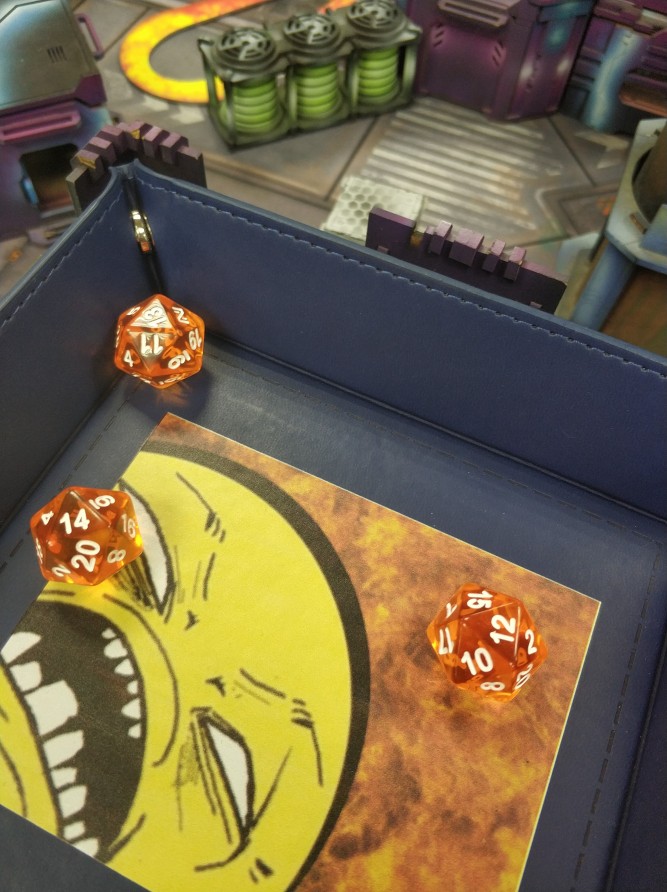 Shooting with BS13 will almost never get better than this.

As a flank was clear i decided to send in Echo-Bravo with red fury to clear out remaining "invincible" soldiers, they still were a serious threat to reckon with (link of 4 dudes with HMG, MK12, BoardShotgun and combi rifle, Doctor and Lt in camo).
EB managed to destroy one boarding shotgun Zuyong and take down Taisheng and ran out of orders. 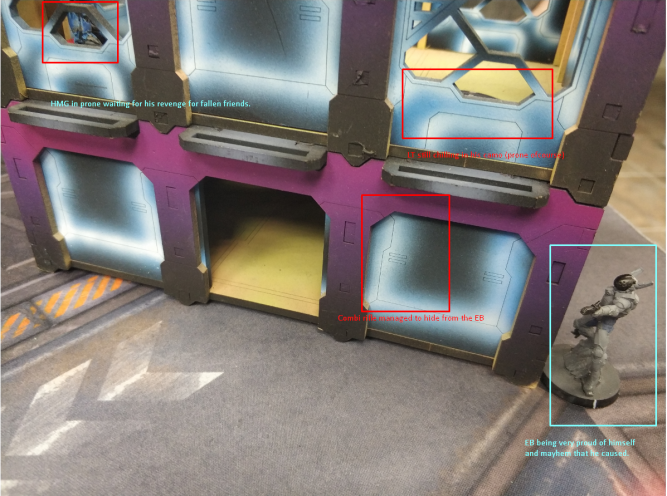 Echo-Bravo not knowing what awaits him in near future..

Having such a threat near the main building Journey sent everything he had to eliminate EB (meaning spending single order to kill him from combi rifle). After that he revived Taisheng and put remaining Zuyongs into Suppresive fire.
In the begining of my turn i decided that it's time to send most "shady guys" who costs like hell and still didn't do anything - yeah, you guessed it, it's Croc-Man.
Croc-man had a couple of shootouts with each Zuyong forcing them to break suppresive fire and to get to cover (wounding each of them one time). 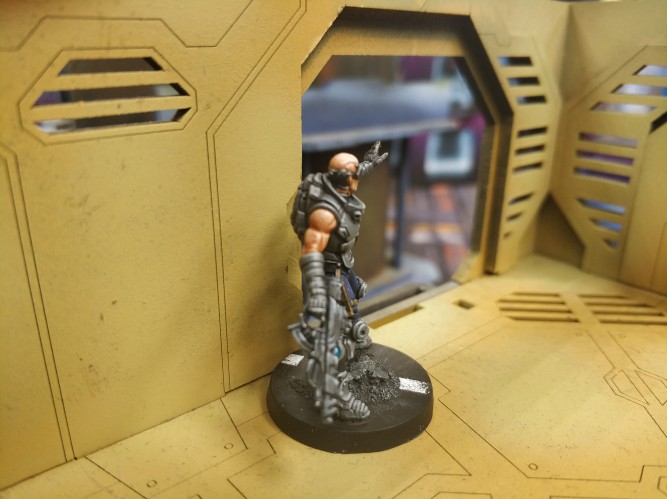 Breaking suppresive fire with a flick of his hand.

Last turn of IA was all or nothing - forming the Haris from remaining Zuyongs and Taisheng and storming into my positions, which led to the death of one Helot (or two?) and to the obliteration of Zuyong HMG from Kamau sniper.
Death of IA's last attacker concluded the last turn and the game.

Cheers to Journey and Tabletop club.
Game was fun, list not that much fun, but i managed to modify it a little bit, which helped me to win a tournament a week later - so yeah, concept of mass camo for Varuna may be not that bad if you do not fall into extremes. 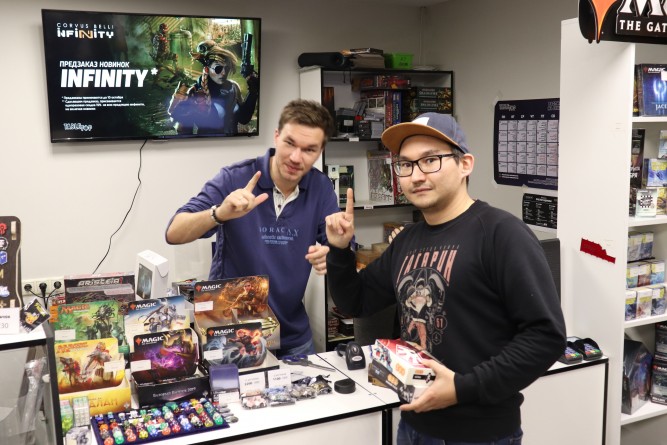 FIrst win in a season for VIRD, let's hope that not last)

Forgot to mention that both of our DataTrackers survived (mine was SO and his was a Doctor), not that many chances to get to them for both of us.