Just another day with half a ton of naked werewolf

Captain Yuri was freezing her ass off.

The heating unit in their improved headquarter was busted again, and the hopeless Dozer clamied he missed the spare parts to fix it. Lazy old man.

Novvy Bangkok had so far been terrible, fucking terrible.

Her last conversation with her commanding officer, Colonel Ikari himself, had not been pleasant. There was even rumours about demotion. She had given the company everything, everything! Except for a few bits and pieces she had sneaked away into untraceable hideouts, but that was just sound thinking.

Her last assignment had not gone stellar. Heavy casualties, an unhappy customer and some new enemies. She was not happy about it either, but these things happen in the business.

And here she was, back where the company started, but on loan to the Dahshat company.

They probably paid handsomely for her experience, but she was unlikely to see any bonuses.

The good thing was that this company had fewer drunks, since many of them were serious Muslims. The bad thing was that they weren’t her soldiers. Their loyalty lay elsewhere, even if they obeyed her orders - often to the letter.

Lost in thought as she was, she suddenly noticed a lot of screaming going on outside the window, something the rest of the room obviously already had noticed.

Yuri turned to her technical officer, Kai, who was tapping into local communications, his glasses lit up by the flashing displays.

“What the fuck is that noise, Kai?”

“It seems O-12 is making a raid on the main strip, Captain. They are politely asking everyone to stay indoors, cut connection to Maya and surrender every piece of illegal hardware.

On their encrypted channels they mention stopping some kind of data dump by taking and holding this area.

Well, that wouldn’t do at all. Chao Pho had hired them to protect this datahaven and no one had invited O-12 to this shitshow.

Yuri pressed the red button on her comlink and issued her orders.

“Libertos, flank the coppers and place mines protecting our east and west buildings.

Gromos, turn that vid-game off and move your Rui Shi to the west building. Right behind the Libertos. Stay low, you are the reserve. You, Keisotsus-“ That was as far as she got before realizing that she had lost her brave Keisotsus in her last failed battle.

The trio of battle hardened women awaiting her orders across the room eyed her through their cigar smoke. Ew. Bounty hunters.

“You, bounty hunters, link up with Crane the sniper and take high ground on the roof. And where the fuck is mr Wolf?”

Everyone pointed at the door labelled Janitor.

Yuri kicked the door open as her soldiers scrambled to obey her orders and get away from mr Wolf’s door.

The smell of sweaty socks and cheap whiskey made her head spin. He was drunk again, one of the few drunks she had to stand nowadays. Passed out in a pile of shredded clothing as he probably has shifted shape in his sleep.

She stared down at half a ton of naked werewolf.

Just another day at work. 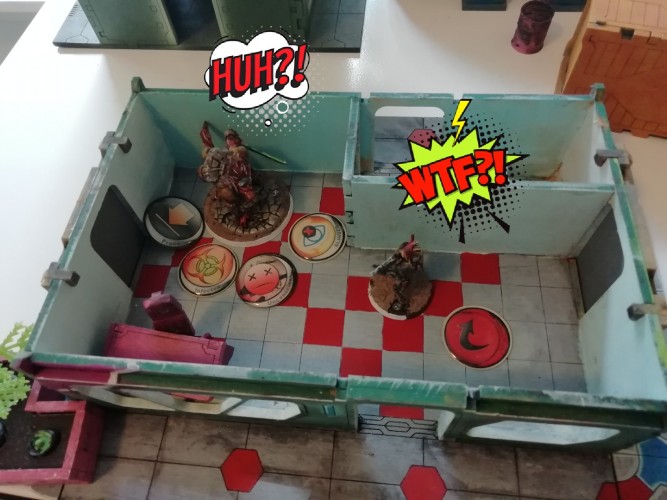 As she was yelling and kicking the sleeping flea monster, the first reports form the confrontation started coming in.

O-12 had come packing for a serious cyberfight. Gromos, her only hacker for hire, reported no less than four hackers with serious hardware. Brand new devices and restricted programs worth their weight in Tessium.

On the west flank one of the Libertos discovered a Sirius K-9 unit, an ill-fitting name since the robot mostly resembled a gorilla. The Libertos liberated the gorilla by firing a few shotgun rounds into the controlling handler. The robot seemed reluctant to return to the wild and instead simply stood still awaiting orders. Any further attempt to advance on the west flank was abruptly halted by an entrenched machine gun on a light robotic frame.

Mr Wolf finally woke up, screamed and threw up.

“Sober the fuck up, Wolf, I you to support Gromos and the Rui Shi with smoke so they can take out that machine gun.”

Werewolf metabolism worked its magic, and before he had his pants on he was sober enough to follow orders - if maybe a bit sulky.

As Yuri returned to the other room, Kai had news.

“Captain, I have detected a huge amount of orders being sent from theses coordinates.”

“That’s right behind Godzilla’s Donuts. Must be where the O-12 commander is directing the operation.”

Yuri sent orders for the second Libertos to advance on the donut shop with the added motivation of double pay if the enemy commander was taken out. The fishmen really liked their money.

Kai offered Yuri a steaming cup of tea, and she was had just grabbed it when several high caliber rounds was fired from the roof. Sounded like Crane was putting the high ground to good use.

She brought the tea and called the bounty hunters on the roof for a sitrep.

“All right, you expensive freeloaders, what is Crane shooting at?”

“Several snipers with advanced camouflage are trying to flank us. They have Gromos pinned down and one of them took mr Wolf down.”

Yuri nearly coughed the tea out through her nose, Wolf was expensive.

“Is he confirmed dead?”

“Wolf? No he is hiding behind a garbage container and crying for a medic. Should we evacuate him? Crane is positive that the snipers are neutralized.” 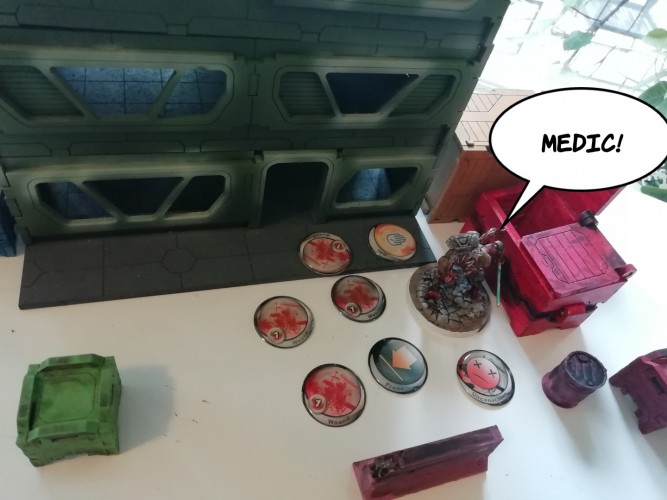 As Yuri was pondering this question, the second Libertos reported a stellar success. The enemy commander was terminated and so was the poor police hacker who had stood to close.

Gromos instantly verified his claim, the hacking pressure had lessened but she was still on the defensive. No chance to activate the Rui Shi with such infowar disadvantage. 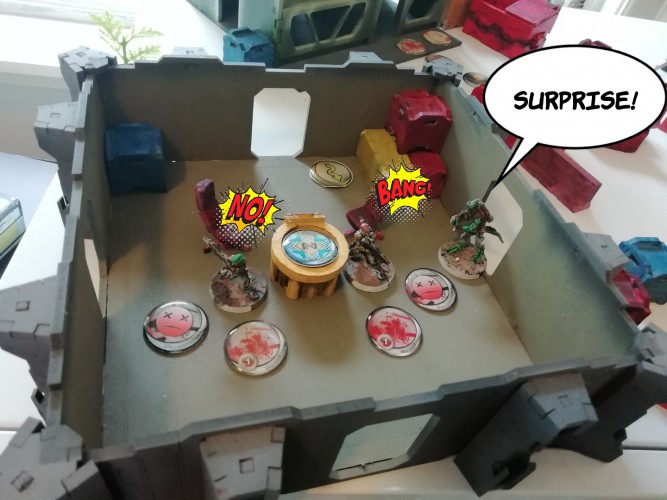 Yuri reached for the radio. “Crane and bounty hunters, take to the streets and retrieve mr Wolf. When he is secured, advance on the eastern side and follow where the Libertos punched though. The rest of the hackers are probably hiding behind the donut shop. Also, bring some donuts, double strawberry or nothing.”

She got the affirmative responses she anticipated and was just about to finish her delicious green tea when the windows exploded inward and shards flew everywhere. Yuri found herself in cover without knowing how she got there - years and years of battlefield experience had made her quick to react to danger and the implant she bought last year on the black market helped to.

High velocity shredder rounds really does a number on unarmed nerds. Several lower staff members were reduced to mincemeat dropping from the screens. Kai stood in the middle of it, his tea still in his hand.

“Get down, Kai! ” she yelled at him as she hammered Crane’s symbol on the commlink.

“Crane, Crane. Respond, give me a sitrep, God damn it.”

“This is Laura, Captain. Crane is down.”

Laura, that was the name of the tattooed freeloader.

“Sitrep, Laura. Why is Crane down?”

“Not really sure, Captain. Someone fired at us as we were climbing down. Might be a camouflaged sniper. Crane was hit and it looks bad.”

“Can you move, Laura? We need to flank that shooter.”

“Negative Captain, we are pinned and you are in the fire lane as well. I advise that we withdraw.”

“Fun idea, Laura, but since I’m the one with Captain in front of my name let’s not withdraw.

I will be out through the door in five seconds, give me full auto covering fire in the shooter’s direction but DO NOT get hit. Understood?”

Yuri pressed the safety on her rifle and set the optics to auto rangefind. She was unlikely to be the one to take on the shooter, but better safe than sorry. She rushed the door and didn’t stop. The cheap plasti-wood shattered like ice as she dove, rolled and nearly lost her rifle. She was also nearly hit in the face by another shredder round, but the bounty hunters providing small arms fire support might actually have saved her. Anyhow, the shot missed and her internal map now also knew approximately where the shooter were situated.

“Follow me, freeloaders! We go around the big laundromat building and then straight ahead.”

Expecting the disciplined if a bit expensive soldiers to follow, Yuri took the lead.

By the end of the detergent smelling alley she was third in line behind the bounty hunters. You don’t reach captainhood by leading from the front.

Laura was peeking around the corner but instantly ducked back.

“Enemies, sir. Some kind of heavy infantry working a communications node outside the donut shop.

Yuri knew that node, it was the White Ice node that ran most of The Strip’s data and it was also the one Chao Pho used to smuggle information. The one they had to protect.

“Blast it with the tube, Laura.”

These youngsters, never learned the lingo. Yuri sure missed her brave Keisotsus.

“The Panserfaust you are carrying on your back, soldier.”

“Well, actually it’s a two component super adhesive launcher, we use it on the ‘Capture alive for twice the pay’ kinda work.”

All the bounty hunters nodded like this made some kind of sense. The Ikari company rarely bothered with this kind of nonsense. If someone needed to be taken alive you rented a damn expensive ninja from the Itto Gatta clan who delivered on time and in person. Glue gun? Made no sense, but you worked with the pieces you had.

“All right freeloader, play with your scrapbooking tool and glue that sucker to the node.”

The bounty hunter pressed a few buttons on the launcher, peeked around the corner and then swiftly fired the weapon. Yuri expected an explosion but was disappointed, the glue made mostly a fhooshing sound as the projectile hit the target area. The enemy soldier reacted quickly and almost got away - almost. Their foot and left leg were stuck to the ground and they were now an easy target. 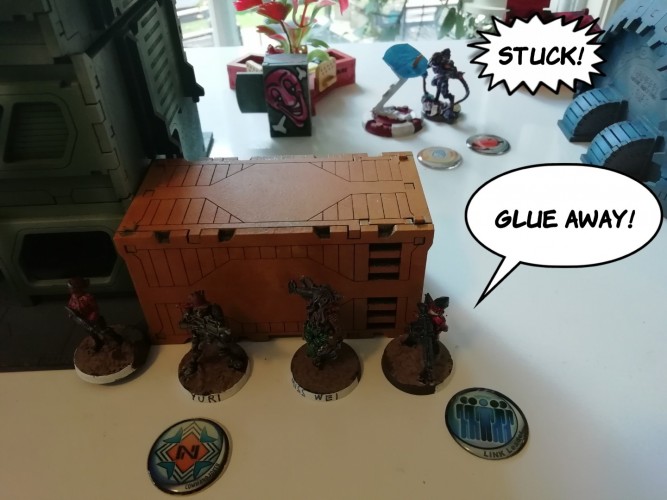 Yuri pushed the bounty hunters forward, as she raised her rifle and aimed down the sight at the helpless enemy.

The soldier was heavily armoured, but enough lead in the wrong places got the job done.

“Captain, the infowarzone is altered. I detect only defensive measures now.”

“Gromos, activate your murder bot and clear the field. You have zero smoke support, so play smart.”

The west side of the battlefield was suddenly drowned in noise as Gromos, her ammo-lugger Burt and their remote controlled gunbot chewed through 4.800 rounds in two minutes. Yuri covered her ears and waited for the all clear.

“Captain, I read zero enemy combatants on the other side”, Gromos said through the commlink. “One camouflaged sniper tried to take me out, but paid for that mistake. My Rui Shi needs to resupply and Burt has sprained an ankle.”

Burt was the oldest man in the company, mostly just held together by his power armour and faith in Allah.

“Withdraw, Gromos, we have the field. Resupply at the headquarter and run diagnostics on the datahaven. The cops seems to have realised that they’re outgunned.”

Half an hour later life returned to The Strip. Music poured from open windows. Neon signs advertising blood sports and cheap rooms glistened in the alley puddles. Yuri was smoking with the bounty hunters in the alley while keeping an eye on the ground. Casualties were light, even if Crane needed a new Lhost, again. Working for a company with strong ties to a silk lord had its advantages though - getting a new body for the old sniper would be easy. Mr Wolf was back on his feet and probably out somewhere getting drunk.

She took another bite of her double strawberry donut.
Just another day at work