We found the cause of the friendly fire incident! Combined army sighted and engaged! 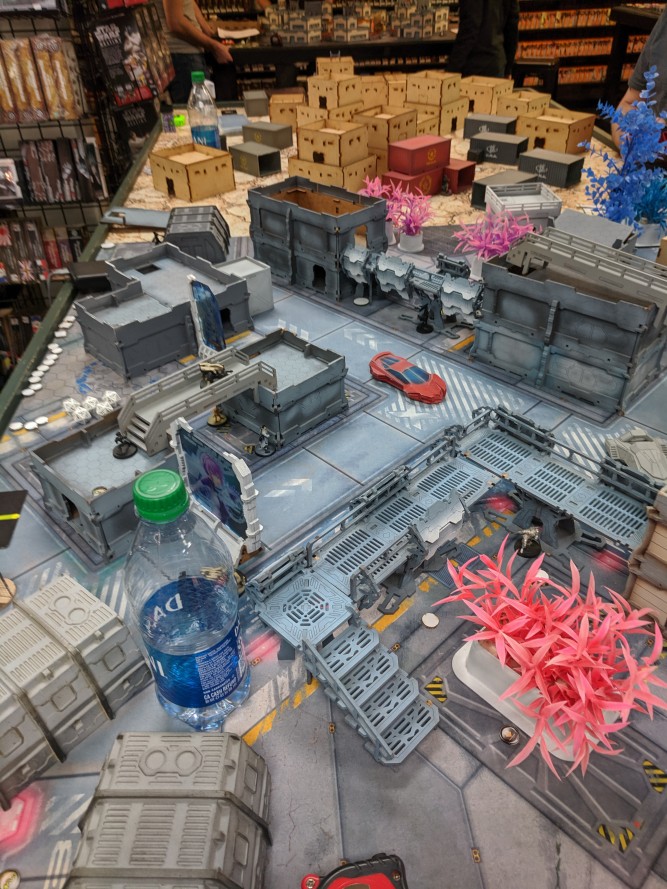 Deployment (on the same table as game 1) and on the same side. Similar positions except this time I decided to put my TR Bot in Group 2 ontop of a building. This was very important as it kept much greater liklihood of preventing roof top movement. 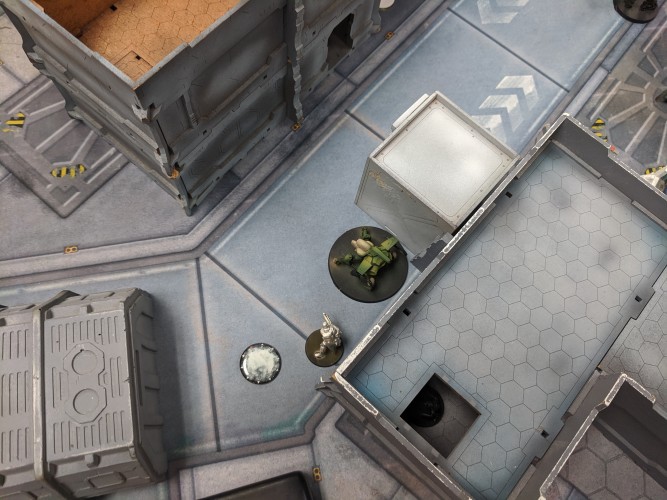 Monk eliminated the wanted alien criminal, Sheskin! He also killed a Speculo Killer which failed to take out the Rui Shi. This Monk will gain honors! My phone died and I was not able to get pictures during the combat, but I got it charged with a portable charger from my car and got pics after round 1 had been completed on my side. 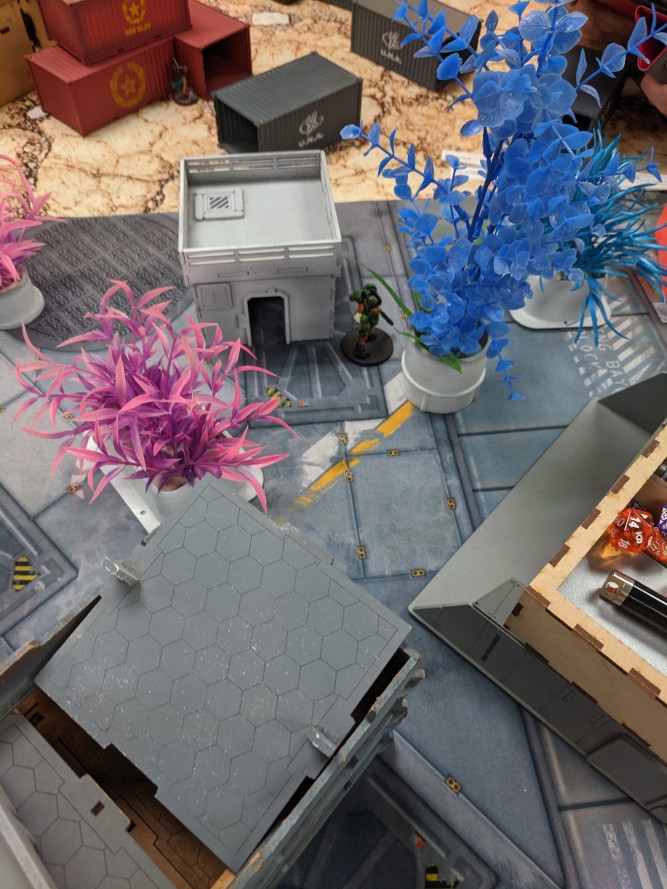 Mowang moving into scoring zone next to opponents deployment zone! 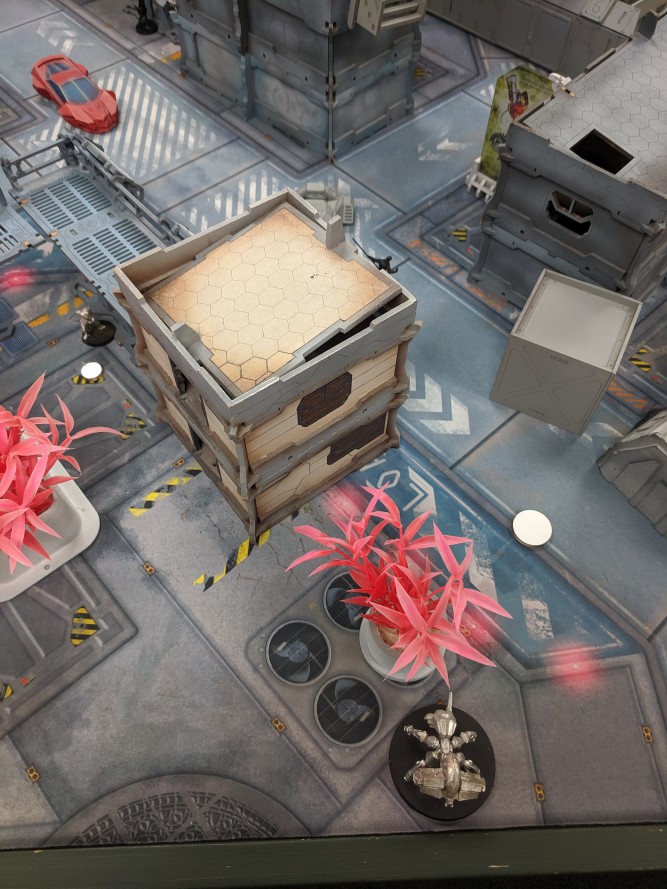 Baggage bot, and monk scoring on the opponents closest to deployment zone as well, to make sure I secured it for the most points! 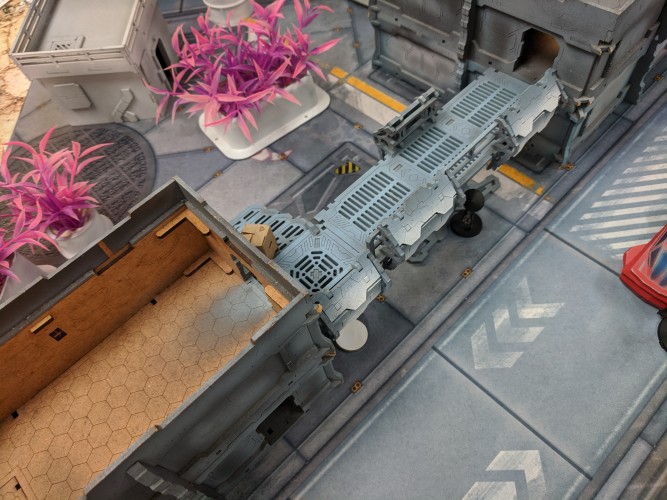 One final push by my enemy and I was able to take out a camo skirmisher (can't remember name) using a mine that was in that doorway. He deployed a mine before he moved up thinking it was a model. My fishman is pictured below the building/walkway. The Box on the stairs is a camo marker (Mine) of his.

My third game I was unable to get more than 4 pictures as moy phone died early on and I ended up using a phone charger later on to get some final pictures.

My opponent won the LT roll and decided to go first, so I had him deploy first on the same side of the board my opponent (George) played on earlier in the day.

His turn one was impetuous Taigha’s running up and two of the four died to TR bots. Next he took the spekulo he deployed and engaged my Rui Shi and failed to wound it.

His next action was to activate Sheskin and run her up. She ran up using probably 4 orders or maybe 5 orders and killing a monk and a TR but and that’s about it. She took a wound from a chain rifle and she moved back into B2B with the Rui Shi as well.

He moved a Taigha up the board from another pool and ended up killing another Kuang Shi. He moved the Taigha up and spent some orders getting into base to base but not killing the Kuang Shi, and killed one but I killed him as a response. I think he used Berserk.

My turn one I used my monks and kuang shi to kill sheskin using smoke and a full order intuitive attack with a chain rifle. I think it took 3 or 4 orders to do it, but I took her out, and then Coup de gras her body so she couldn’t come back. I then used a monk to CC the Speculo critting it off the board. I activated the Mowang and started making my way up the board killing the remaining Taigha. I discovered a pesky Noctifer missile launcher, which prompty missed me, and I hit him three times one of which was a crit, and the other two he failed Armor. Red Fury shot FTW.

The Mowang then moved up to shoot a Baggage bot guy and I moved back and went into suppression.

At this point Rushputin had lost quite a lot of punch to his army and moved some camo markers and some other guys including Doctor Worm up to get into his scoring zone on his side. He was not in Loss of Lieutenant so he must have had a Chain of COmmand as one of the Camo Markers.

I then went on my Turn two and moved the Mowang up across the board going prone under a bridge and getting into his scoring zone next to his DZ. I killed an immetron and ikadron in the process. I then went into suppression.

The rest of the game mostly consisted of him attempting to accomplish something, and getting killed or crit off the board. I had a large amount of luck on my side during this game!

We ended the game with a 10-0 victory to Yu Jing, routing out the filty combined army and finding more evidence along the way that none other than NA2 was supplying them intel. Luckily the superior might of Yu Jing was victorious against the evil CA again!

Fantastic game with Rushputin, and look forward to playing him at future tournaments.