Combined In the Pit! I repeat, Combined army in the pit! 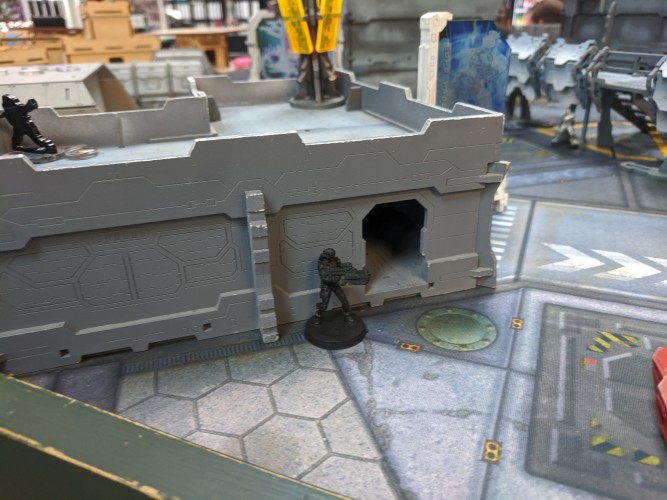 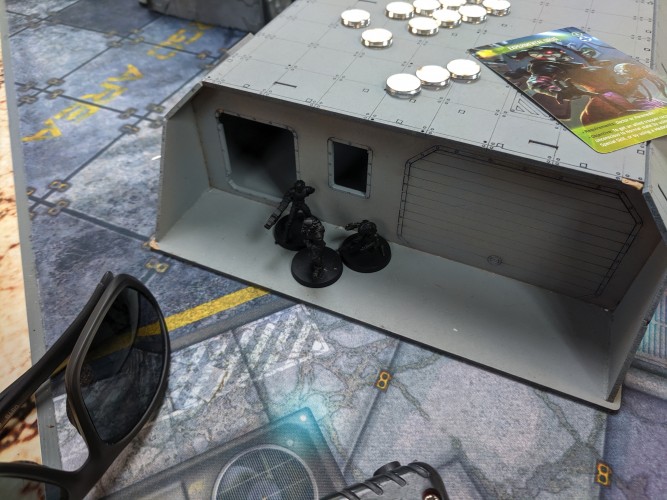 Kuang Shi were deployed to protect the Mowang heavy armor

Major Lunah deployed at the top in the building, and a monk below. A speculo would throw smoke and the MSV2 HMG would take out Lunah after being discovered. 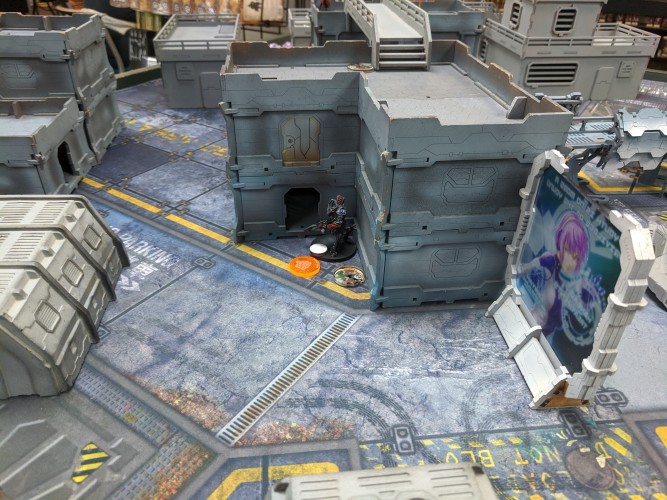 Charontid ended the turn here after doing two hacking / Zone of Control classifieds here with two of the HVT's. This would be the deciding factor for the game. As we ended up tying on points for number of classifieds completed. This was his data tracker. 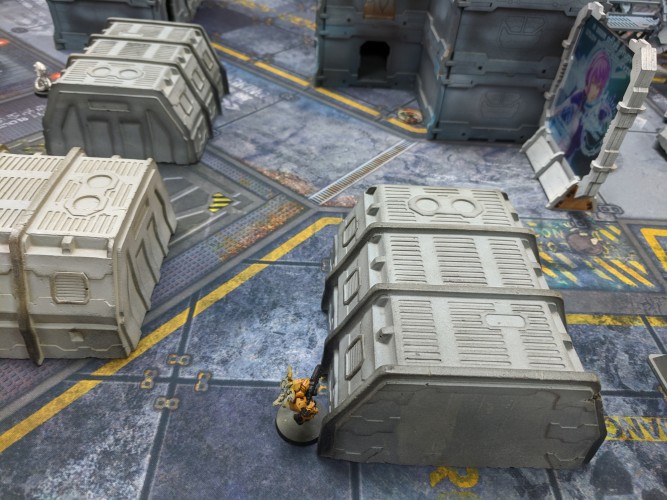 My tiger soldier with spitfire walked on the board edge and decided the Charontid should not exist anymore. For the State Empire, he used two orders and on the second order, crit and hit 3 more times. The Charontid failed two additional saves and was removed form the table! 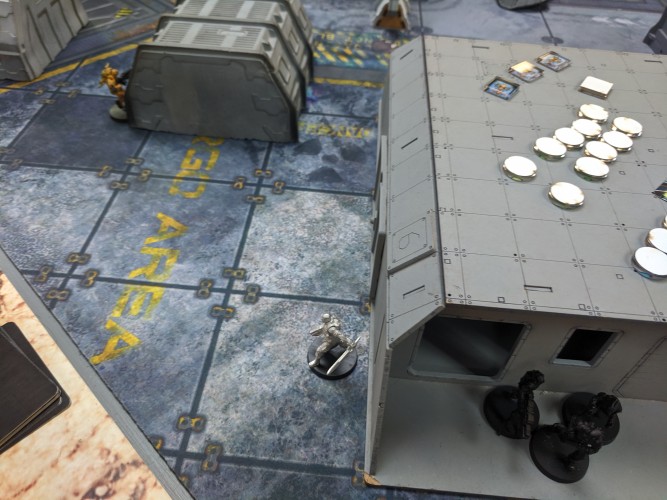 This monk was a bit of a hero. He ended up smoke dodging to survive turn two, and then running up to another camo marker and killing in in base to base. The downside is he had a Shock CC weapon so he removed the model and I needed it for a classified... this happened two other times too. Shock is sometimes a pain. 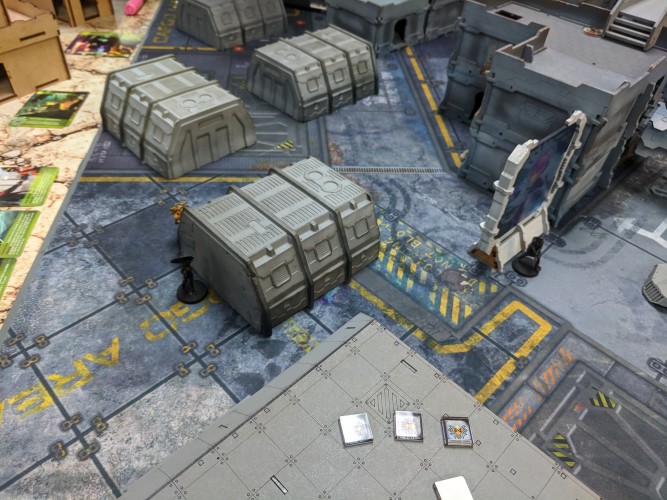 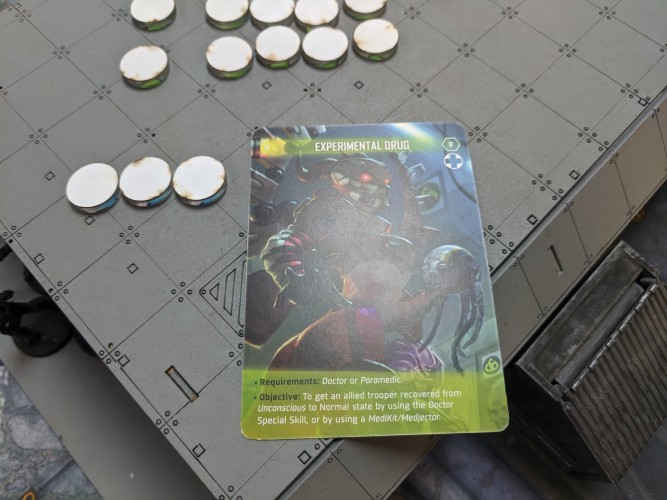 Awesome, first classified completed for Countermeasures. Got my paramedic tiger solder ontop of the building, Successfully landed. Used the shortskill to medic my Doctor who was knocked unconscious. Doctor did NOT fail his PH roll from paramedic. Very nice doctor! Way to do triage on yourself! 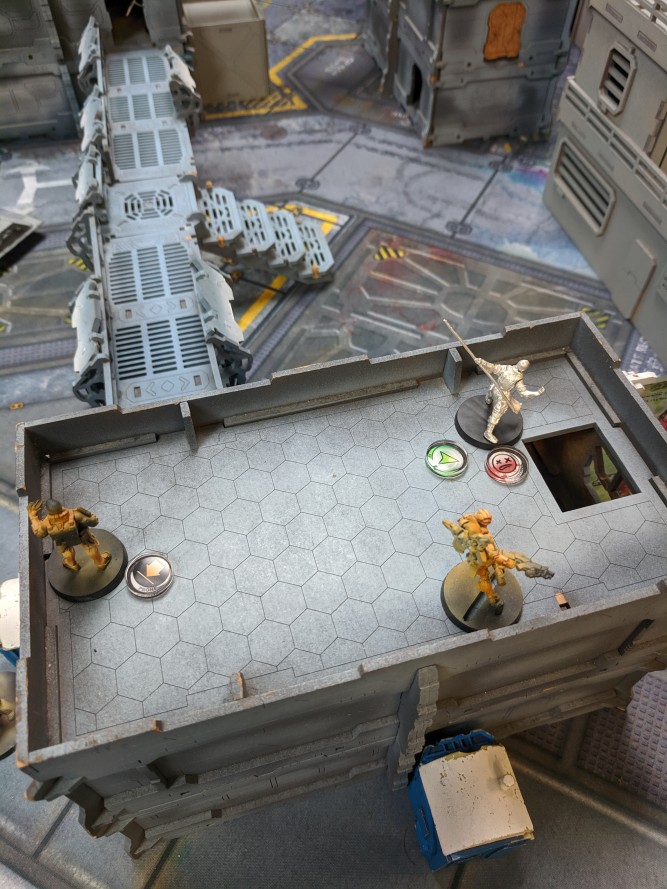 Doctor ran over to Major Lunah and got her back up but she ended up getting shot in an ARO and poof dead. No more Lunah. The reason a Monk was up here was because a Speculo killer ran upstairs to take out my Doctor but ended up not doing a wound (Yay armor save). During my turn, my monk ran up the steps and attacked him. He was later shot from afar by a HMG and unconscious. 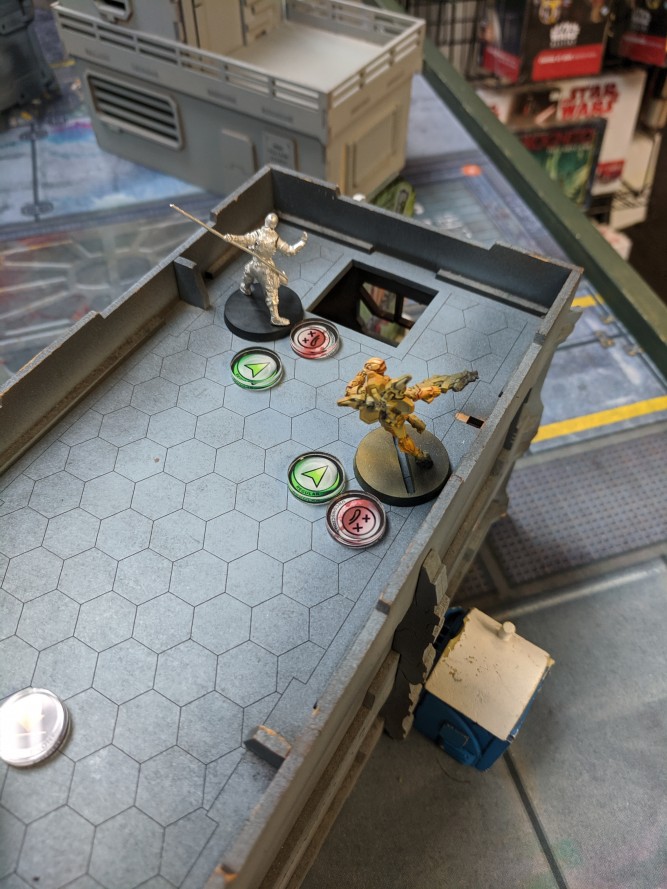 Unfortunately Turn 3, everyone on top of the building was knocked out. Alas... HMG's hit hard. 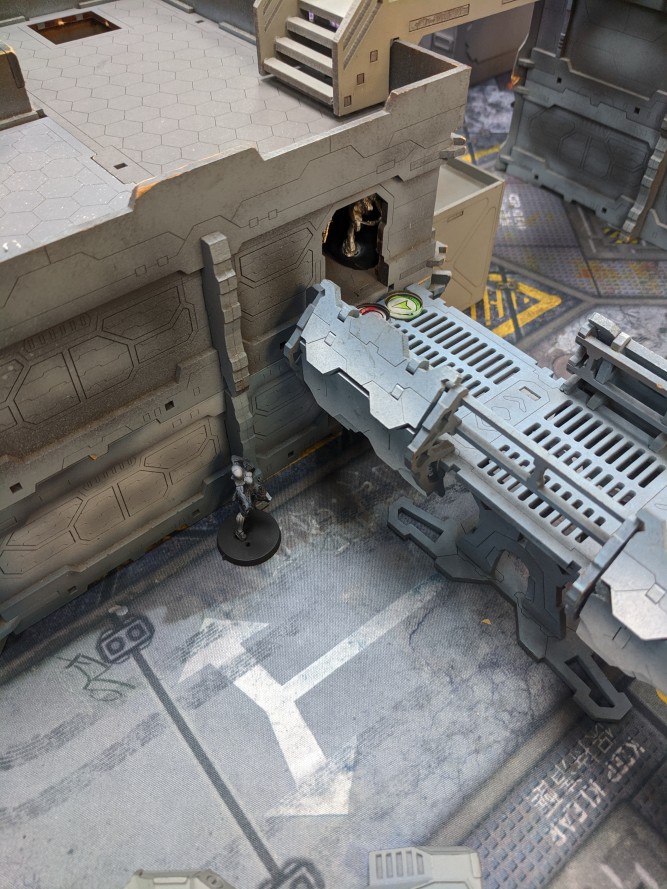 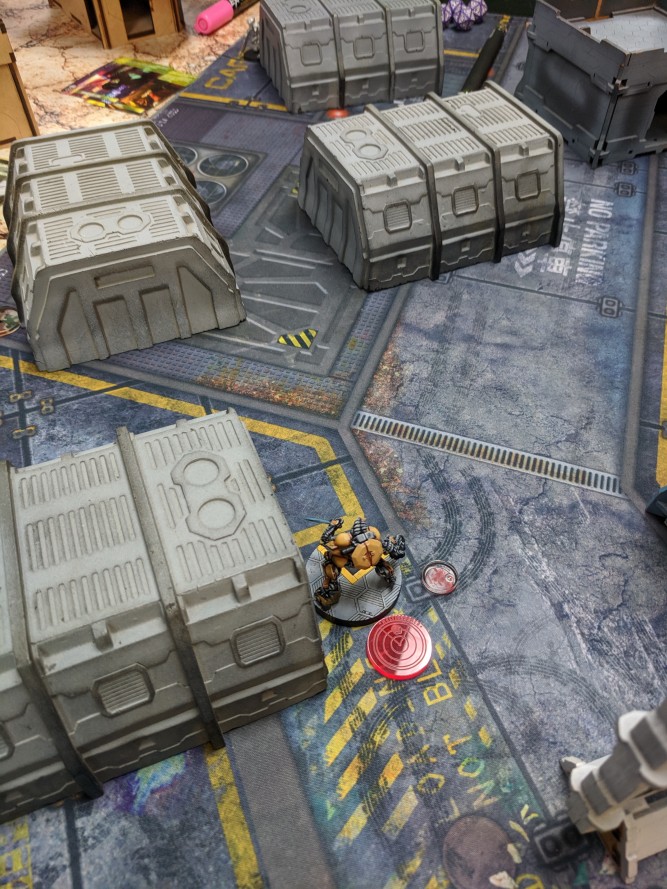 Mowang comes out. And is greeted by a nasty Noctifur Missile launcher... that was not what I expected. He took only one wound because he couldn't hit the broadside of a barn. Must have been a newby in the pilot seat. 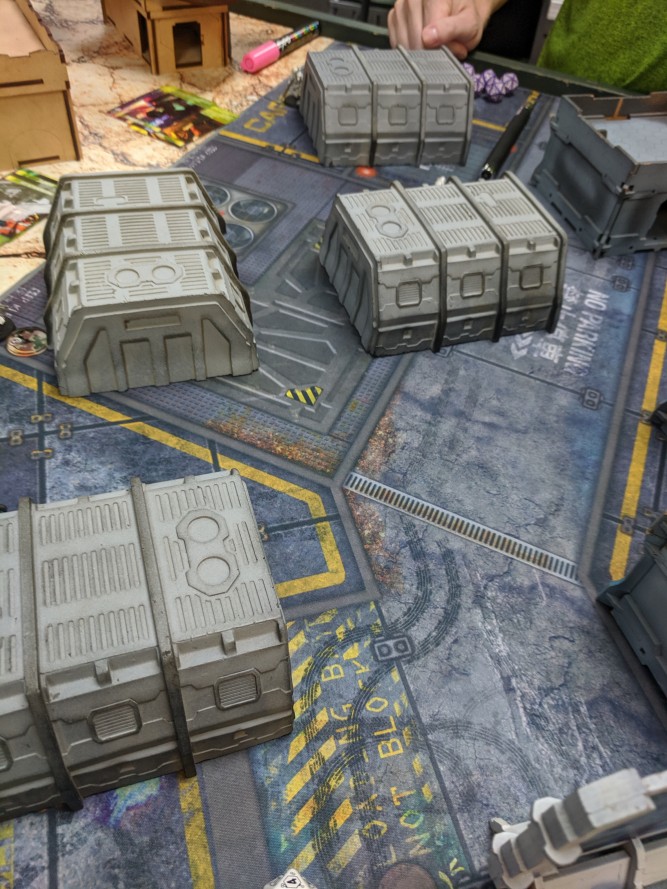 Take a guess what's missing? Yeah... the Mowang. Couldn't successfully hit, yet again. So another 3 saves from a Missile Launcher and he was toast. I was having some trouble making rolls tonight. Seems to be my plight with YJ. Combined must have been fiddling with my luck! 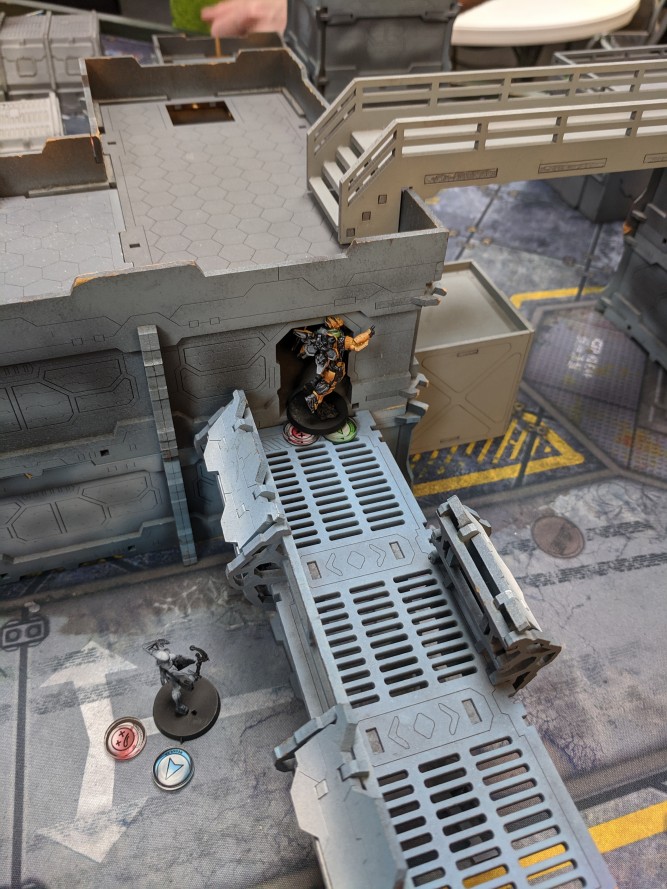 Turn 1 the Charontid did all the work primarily. He spent two or three orders and walked up to my HVT's and completed two classifieds, ones I could have done which was unfortunate. He then used the Speculo Killer, to drop smoke on his feet. I didn't have any ARO's with Lunah at that point. He was right below her on the platform out of sight. Then the Maakrep tracker spent two orders, one to discover, fail and then Discover shoot sucessfully. Hit once, Lunah failed armor. She went prone and unconscious. I had a doctor up top I would use next. The Speculo then spends the last two orders running upstairs to take one shot at the Doctor and failed to kill him.

My turn one, My other impetuous moves happened with no real consequence. The Monk next to the building's most efficient moves were to move toward the speculo within the building. Climbed the stairs with his irregular and I then spent a regular order on him to engage the Speculo. unfortunately I underestimated this and he shot him with a shotgun, blasting the doctor as he ran up the ladder... darnit. So I killed the SPeculo with CC (YAY) and doctor was now uncoscious. I then decided to use my main order pull and walk the Tiger with spitfire in off the side of the board. He walked on out of LOS, hit cover, and then took a shot at the Charontid. Didn't do anything and armor saves worked. We determined he couldn't improve his cover so he stayed put. I then shot again. This time, a crit and 3 other succesful hits. Dodge failed on a 19. he failed two more armor saves with the crit and the Charontid was gone. I then dropped my Paramedic Tiger ontop of the building next to the doctor, could complete a classified with this. Tiger lands succesfully, double crawls over to the doctor. Then I used a short skill to heal the doctor or paramedic him. Doctor succesfully passes PH check and comes back. He then double crawls across and heals Lunah. Lunah then double crawls, stands up and takes a shot at the Maakrep Tracker, Tracker takes one hit and saves armor, and moves out of the way. Lunah then tries to shoot a doctor bot, and fails to hit. Out of orders now

Turn two was a bit of a blur. Maakrep tracker and another camo marker shot and killed Lunah and put the Monk unconscious. Tiger solder as well. No other classifieds were accomplished during this turn. He then ended with the Tracker in suppression on a building closer to my building with the doctor. He was short on orders at this point, as he still had one hidden. A camo marker then moves and takes out the SPitfire Tiger toward the end of the turn. He tries to kill a Monk that is on the side of the buiding but Monk smoke dodges successfully.

My turn two I bring back the Tiger Soldier paramedic and he takes a ton of shots at the maakrep. He gets hit but saves and goes out of LOS after the save. I put the tiger in suppression. My monk then runs over to the newly revealed camo marker that just tried to kill him, and throws smoke forward successfully. The Monk then runs through the smoke and kills the model, I cannot remember what it was. I needed this model for a classified unfortunately... boo shock weapons... sometimes. I decided I wanted to try to complete a classified with my Data tracker the Mowang, I got to spend three orders on him, and he then prompty died to a hidden Noctifer missile launcher. How sad. I wanted to see what he could do, but I missed all my shots.

Turn three, he activated the Maakrep, killed the tiger in suppression. It took a few horders, we bounced crits, and other hits. But he took him out. He then ran him down to my final HVT and completed a third classified. THis put the presure on me to get two more to beat him. In the process of this classified, he killed my Flash Pulse bot, and Ninja. MSV2 doesn't care about Mimetism or TO unfortunately.

My turn three I tried to get three classifieds done but all I could accomplish was coup de gras with my Liu Xing, putting us at 3-3 classifieds, but he had used his Data tracker to accomplish one, putting him in the lead.

This was a great game with a local player not participating in the Campaign. He was running Vanilla Combined with a Charontid LT Hacker, and a few other goodies. We were playing Countermeasures and it's definitely one of my favorites, but we both got a bunch of classifieds requiring engineers, neither of us had, which made it a low scoring game.

I ran three drop troops in this game. Two tiger soldiers and a Liu Xing. All three performed admirably, and did what I intended.