Although the sting was felt after the smoke cleared. The aliens will pay for the deception which caused this friendly fire incident! 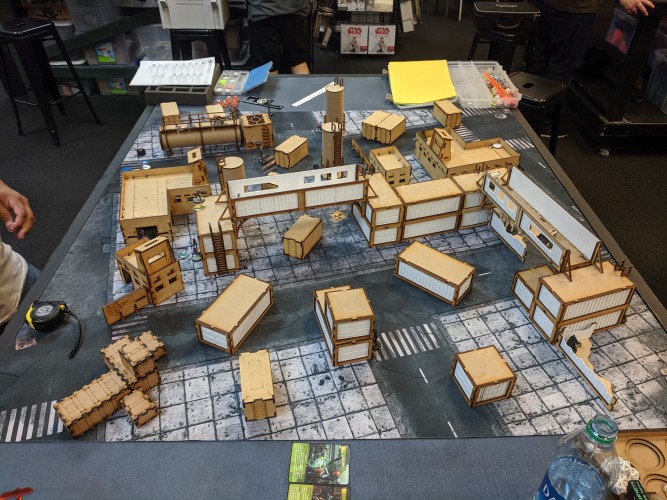 I chose deployment, and picked the side with the bridge. I ended up putting both my TR bots up there. 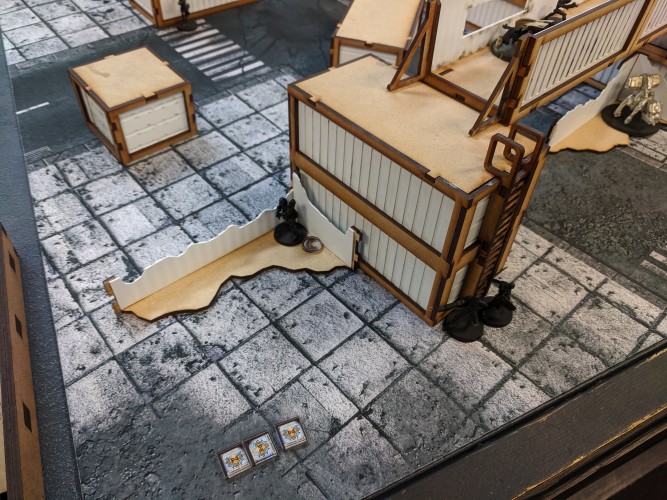 Monstrucker + Kuang Shi + Monk in the picture. Baggage off to the right and TR bot up top. 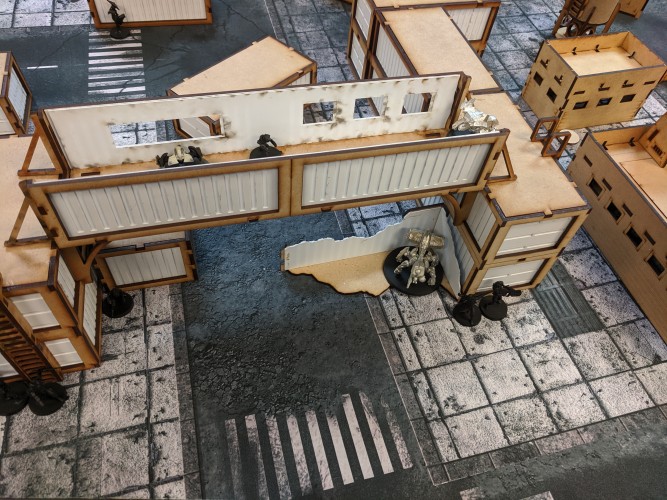 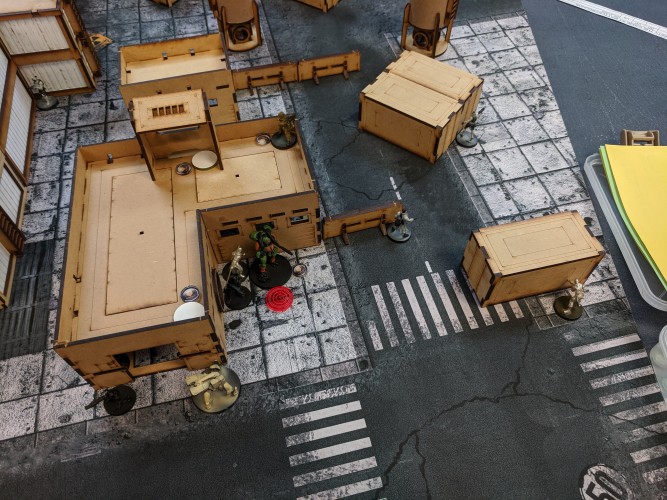 Announcer Voice: "Known for his girth and length, this man uses his SHOCKING laser precision and red fury to deal fire and fury to the enemy. Let's hear it for MOWANG!!!!" Sorry... had to... watched some Battle Bots recently and the announcer voice is still in my head. Monk + Kuang shi are near him, as well as a flash pulse bot, another monk, and another Kuang Shi. LT Daiyong is on the roof behind the overhang wall, Controller is on the roof prone, and Fishman is prone. 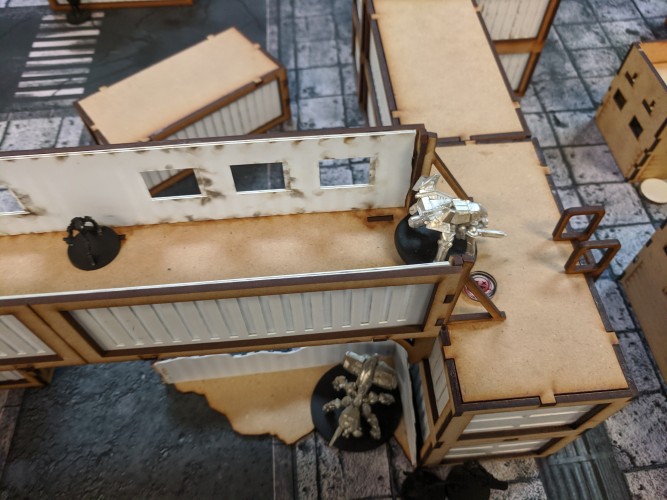 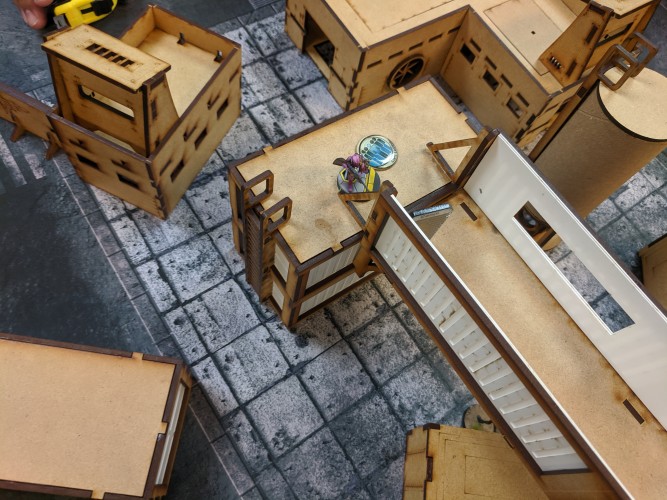 Oh look, there he is. The intel description described the enemy as Combined Army, but the recovery of the corpses revealed that the enemy was in fact Yu Jing. They would get burried with honors, and families a medal for their service. 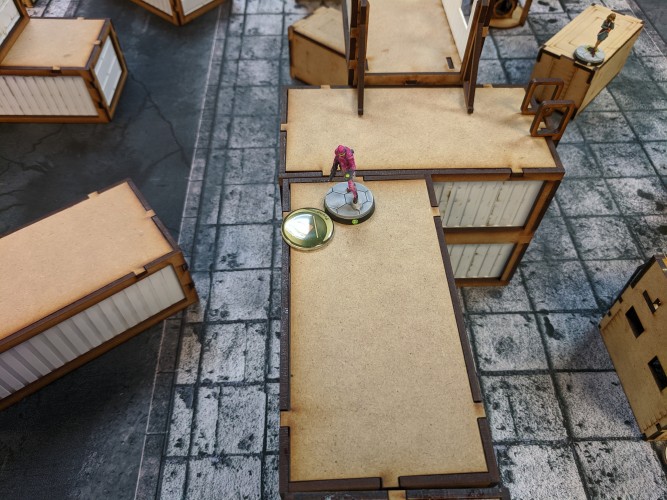 Masterofmelee Daiyong moves up and goes prone, attempts to hack and fails twice but succeeds a third time against the HVT. 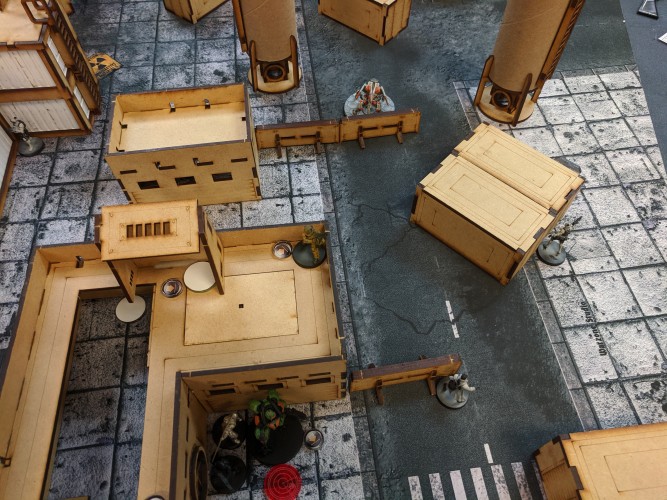 TR Bot revived, shoots and kills Daoying. ANd the TR Bot does not get killed by the Haidao sniper! Good luck on my side. 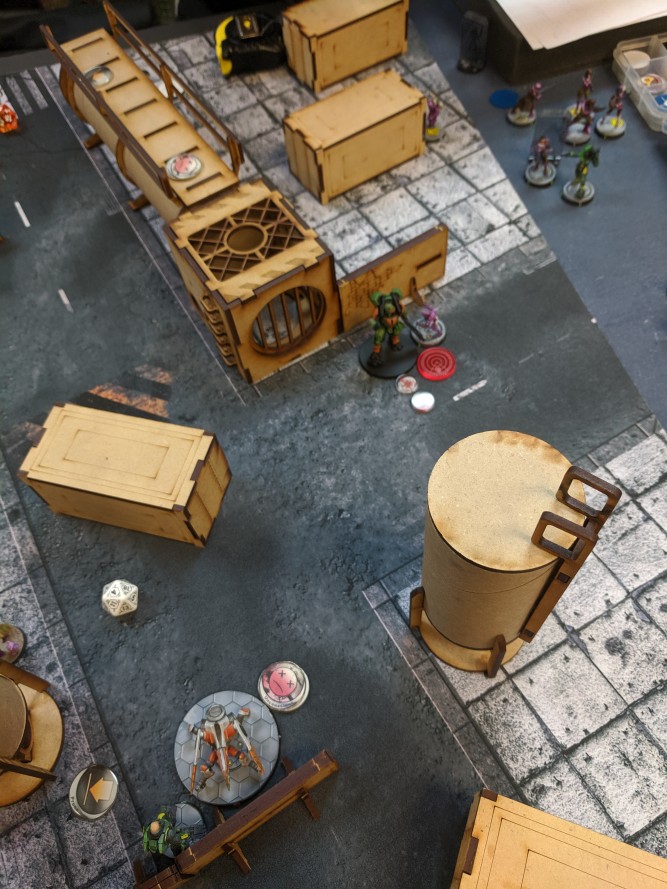 The aftermath! Mowang goes on a murder rampage and kills everything but three models on the board by the end of my turn 3. He then gets taken out on my opponents turn by a Liu Xing from behind. But not after the Mowang during my previous turn accomplished two classifieds!

This was going to be a very difficult game, in which brothers would be pitted against brother due to Shasvastii or mercenary coms hacking and miscommunication. To have Yu Jing kill its own troops because of misinformation and deception is an atrocity and a warcrime that is unforgivable! Where is O12?!?!

Anyway, I decided deployment for Countermeasures and had him deploy first, so he decided to go first.

Round one he moved up his link and Haidao sniper with his core team. He took out both my TR bots and then got him into a very good position. He then coordinates a Lu Duan with 3 camo markers up the board one of which would turn out to be his LT. He ended with trying to hack an HVT for a classified with his LT and failed twice, but succeeded a third time.

He used a final order to recamo his Daoying and I can’t remember what else.

During my first turn I lost a monk or two and a Kuang Shi during their impetuous phase. I was pinned into a relatively difficult position. H activated my Mowang and decided to go pound some remote faces in. At this point the Lu Duan had only its primary echo up or it was totally revealed and I took some shots at it. It took a few orders but I knocked it down after dealing with positioning. I ended up using a Guilang FO and dropping a mine and then shooting, but the Guilang quickly died to a flamethrower. The Lu Duan died to the mine.

I then spent a bunch of orders with the Mowang and finally took his TR bot out. Spent a final order and removed its body from the board, as his engineer was right behind it.

I put the Mowang in suppression I believe. I had my Yaozao fix my TR bot and I ended up shooting his LT who had AROed to hack the Forward observer to prevent him from being able to complete a classified. This put him in loss of LT beginning turn 2.

Turn 2 for Masterofmelee, did some irregular moves to get guys into better positions. He ended up getting a Zencha into a pretty good position as a camo marker, and the last thing I did on his turn was discover it.

During my turn 2 I lost Xi Zuang to the Zencha, my Warcore, and tanked the armor safe from his Boarding Shotgun. I then took my Mowang and started murdering everything and anything I could. I took out most of what was left of his core fireteam, the sniper, and got up to the center and completed two classifieds, one to wip the HVT as a Veteran/Elite, and one to do a wip roll on the enemies half of the table.

His turn three he got tunne vision and spent a bunch of orders trying to take out the Mowang and finally was able to, but it was too much too late. He was unable to secure any additional classifieds and ended the game with three accomplished.

My turn three, I completed a coup de gras, with a Kuang Shi, as well as my Monstrucker running up and WIPing an HVT to get 4 completed objectives.

Game 2 of ITS event