October ITS: csparris vs george 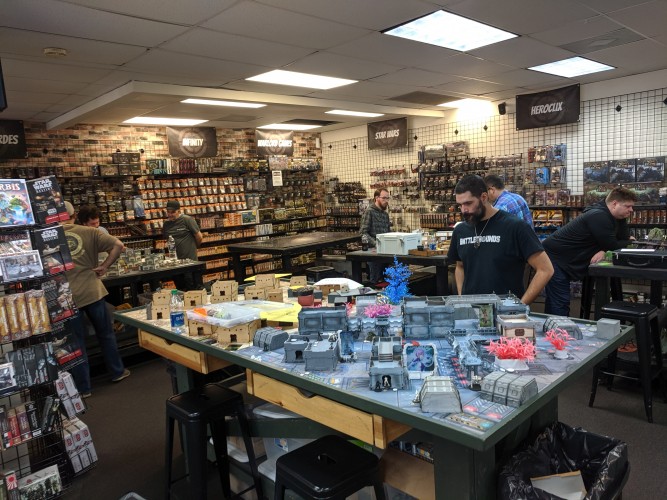 October ITS at Battlegrounds Midlothian, VA 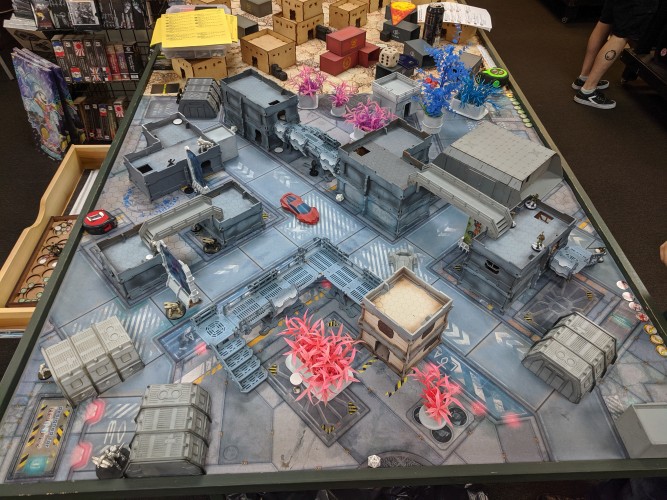 I deployed on the left side, and George deployed on the right side. This table had tall buildings in the center, with very little straight through board sight, so snipers would be useful in only a few spots. 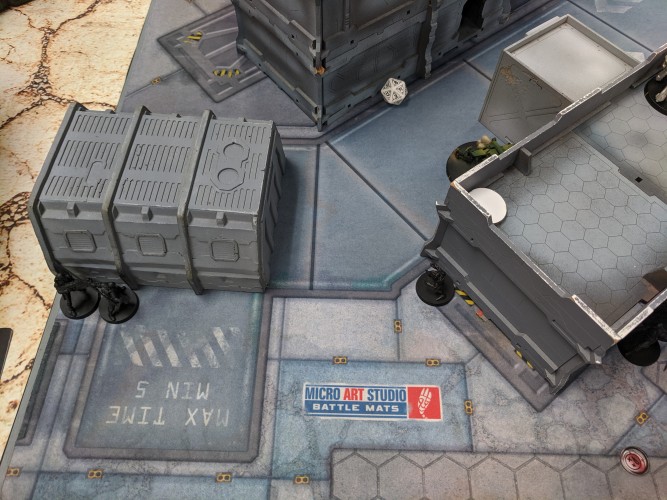 Left side deployment. Rui Shi, Kuang Shi, Monk, and to the right is a TR bot, and two Kuang Shi 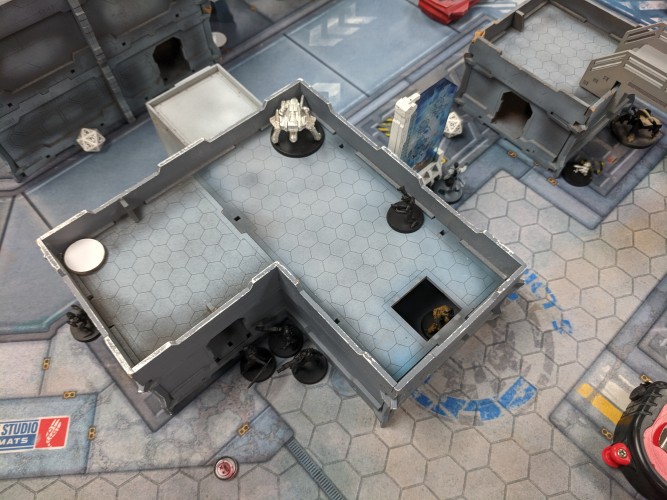 Central area had TR bot, two Kuang Shi and a monk, Camo marker was my LT Daoying. Kuang Shi controller is pictured in the hatch. Up near the sign is a Warcore. To the top right is another TR bot. 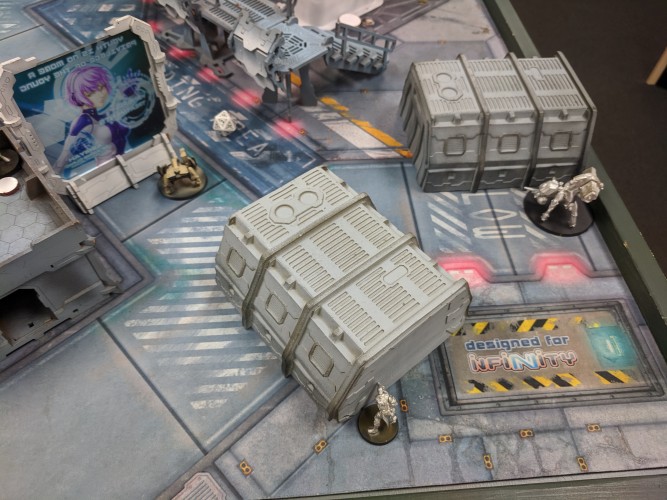 Baggage bot is to the right, wiht a Monk at the bottom. Flashpulse bot next to the sign, and to the top middle is a Guilang Forward Observer. 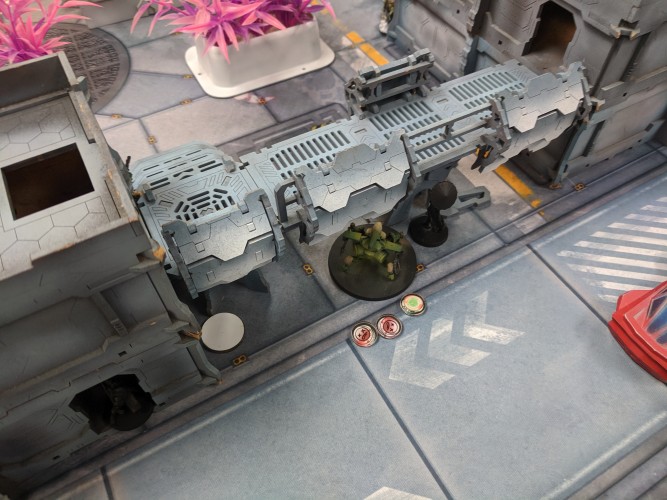 Rui Shi first time it was knocked out into unconscious level 2. 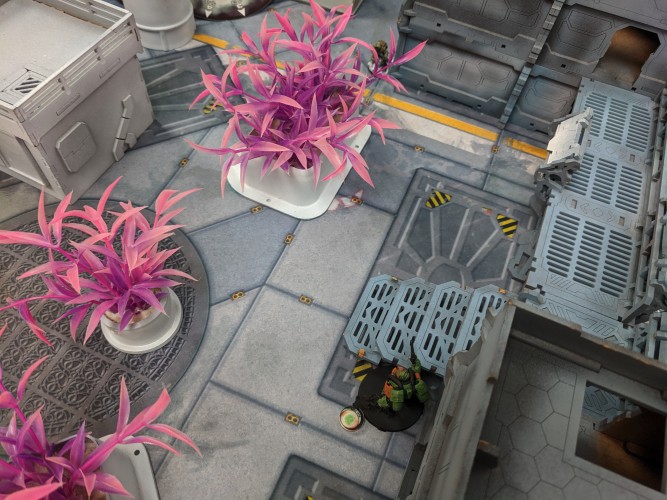 I ended my Mowang here, and put him in suppression. This is on Georges turn where he's now using suppression. 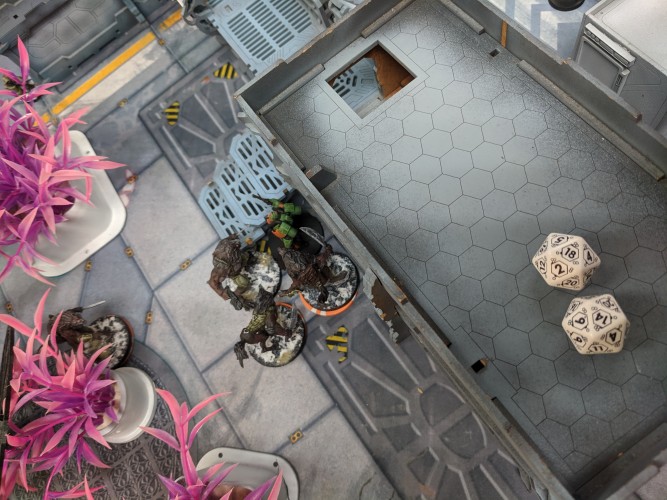 Uh oh, that's a lot of CC engaged with me. I managed to survive all of this through superior armor saves and lots and lots of luck! 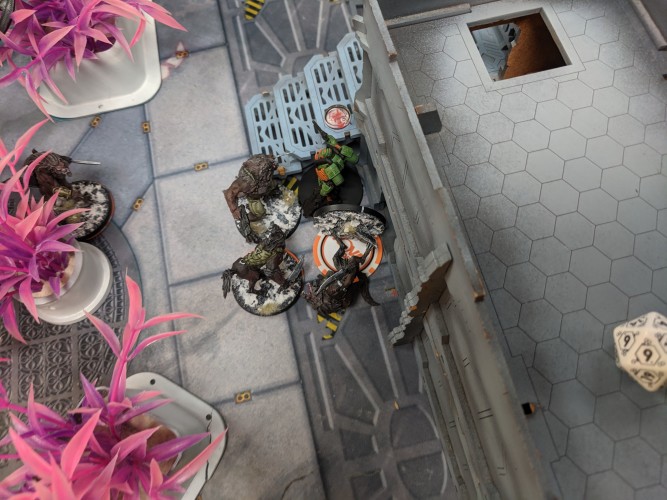 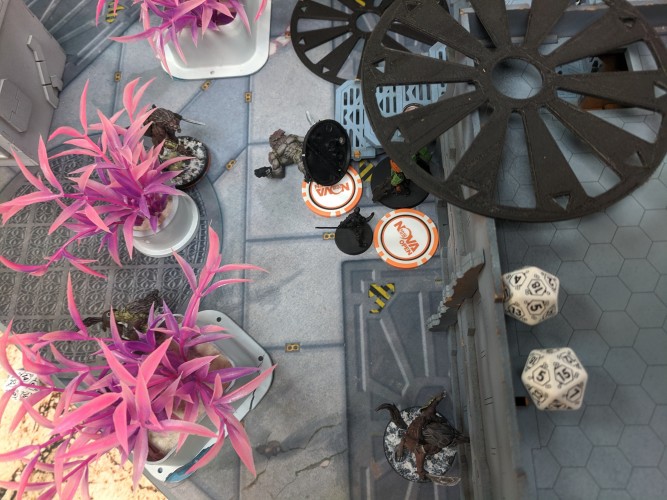 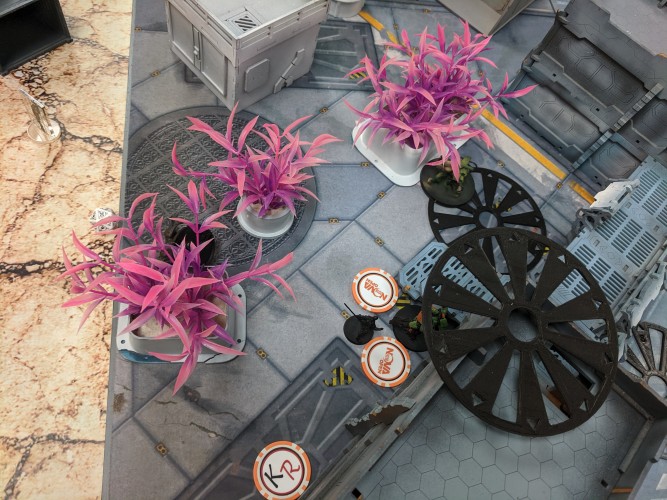 Rui Shi after being brought back up, shooting through smoke and taking doggo's out. Unfortunately killing antipode packs is very inefficient, but I had to do it... 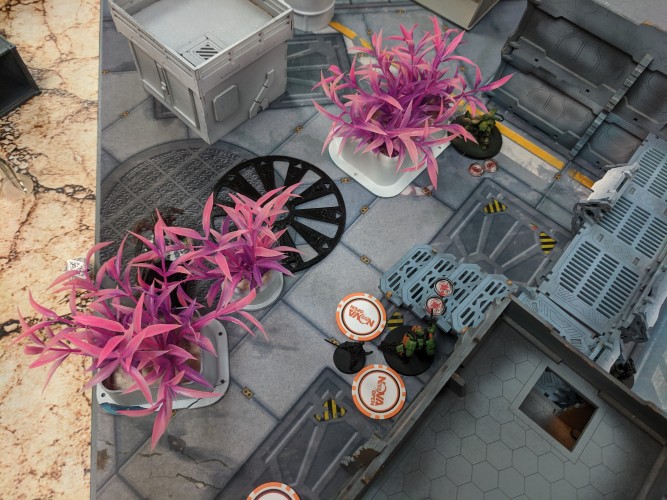 Mowang survives to the end of order pool of surviving Dog Warrior!

This weekend I completed a three round ITS turnament locally at a Store in Midlothian, VA called Battlegrounds.

I couldn’t always take turn by turn pictures because it’s a bit time consuming to pay attention to your opponent as well as take pictures and complete a game in 1 hour and 45 minutes.

Game 1 was against a reasonably newere opponent who has been getting a lot of games in and playing TAK. Since I hadn’t ever had a chance to play TAK I challenged him. It was a very cinematic game and I thoroughly enjoyed it. George, great job playing and I look forward to more games!

I went first against him to setup a good position for defense. He had a bunch of Dog warriors, antipodes with the controller and a bunch of other orders. It was going to be a rough game for my Mowang I had a feeling, but as it would turn out, the Mowang is beastmode encarnate. I used my Rui Shi to attempt to discover shoot a camo marker, using 4 total orders, to discover what was actually just a decoy.. booo.

I started my turn with all of my impetuous. I was running 4 Kuang Shi and 4 Monks. They moved around and there wasn’t any ARO to speak of, so they were fairly safe. I then activated the Mowang and started trucking up the board. There wasn’t much to see, so I moved up and got myself into position for the end of the turn and my opponents turn and put him in a hard to surround spot. I finished by moving my datatracker into one of my scoring zones to get extra points.

I then moved my Rui Shi up and got him to a pillar for cover, and used an order and command token to put the Mowang and Rui Shi into suppression. This would be very important for the turn 1 rage of the doggo’s that George would send my way.

George’s turn one, he spent all of his irregular/impetuous orders throwing smoke and setting up an assault on the Mowang. He knew he had to shift him or he’d never get to take a zone over. He spent several orders trying to take out the Rui Shi, and finally did. He accomplished this by full order climbing his Frontovik down the building and shooting it with T2 marksmak rifle. I made my saves the first try but lost and went double unconscious the second. The Mowang unforutnatly whiffed his shots at the Frontovik. He then shot at the Mowang again and this time he whiffed.His frontovik tanked two hits from suppression, and he turned his attention back to the dogs now that MSV2 was disabled.

He moved the Dog Warriors up, throwing smoke each time to cover his movement forward and provide a path of cover. He ended up getting up to the Mowang, and taking a Crit from my heavy pistol as he walked into B2B. This transformed him into a bigger badder Melee dude. Hmm, better be glad the Mowang has CC16, cause this came in VERY handy. He then CC’d me, I tanked the hits, he tried it again, tanked it. He decided he was going to use another order pool, and ran his antipode assault pack. He ran one up and ended up getting another guy in B2B. The position I was in kept him from surrounding me. He was now on Burst 2, CC20 +1 damage. He hit me, and I I failed. Tanked the armor on two hits. He then tried again and this time I took a wound. On the other order, he ended up getting crit by me and the antipode went down.

By this point he’d spend a large majority of his orders trying to take my Mowang out with no success.

He ended his turn in B2B with his Antipode Assault pack (1 guy) and other antipodes around the area. As well as a Dog Warrior in B2B

On my TUrn 2, The dogs were the closest model for my monk to engage, and he walked into the building and threw smoke on them. There was no ARO from them besides a dodge, so the unengaged dogs backed away.

I then went base to base with each dog and murdered it (crit with the monk now in Burst 2, +1 damage) having two guys engaged.

A monk handedly saved the Mowang!

The other antipodes were then slaughtered by my other monk moving toward them throwing smoke and my Rui Shi being brought back to life by my Monstrucker’s Yaozao. This meant I could not shoot through smoke at the antipodes, but their dodge ability is strong. Luckily they get 1 dice and I get 4.

I then used smoke and shot the two Irmandino as well that had come up using smoke from Turn 1.

I used pool two to move up a Guilang and take out his Heavy Rocket launcher in his core link team. This let me take a lot of pressure off all of my guys knowing he didn’t have many/any heavy weapons left for longer range.

During his turn, he ended up shooting my Rui Shi to onconscious from what was left of his link team which was now a 4 man. I tried shooting but missed and get hit twice and went onconscious.

He was running out of options so ended up moving the last Dog warrior up and double chain rifle shooting my Mowang. He ended up putting it in No Wound incap and ran out of orders. During my turn I ended up killing the dog warrior and he moved another Frontovik that was ontop of a building over to try to take out a TR bot but he ended up getting killed.

His final few orders he killed my Guilang.

Game only went to end of round 2.

I had scored 6 - 4 by having my Datatracker in a scoring zone for the two full turns and he was unable to.

Great game, pretty intense. Got tons of work out of both my Rui Shi and Mowang.