The Druze's current benefactors had gotten wind of a Combine patrol heading down the main strip, starting to make there presence felt, Security Chief Arslan and his crew were dispatched to stop them. 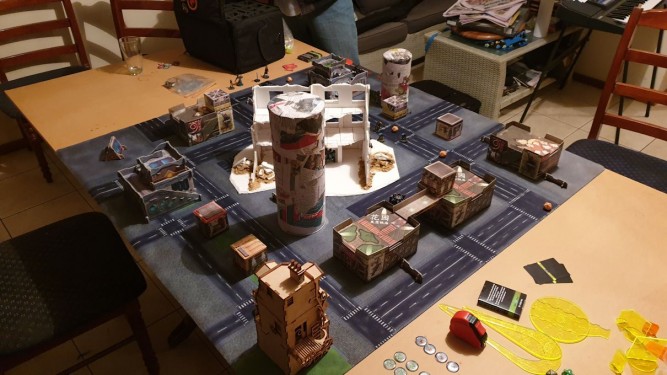 The battlefield for tonight's clash

The Combined Army got the drop on the DBS and were already in position by the time Arslan had arrived. A hasty call of orders and the DBS forces were arranged as best they could already being on the back foot. 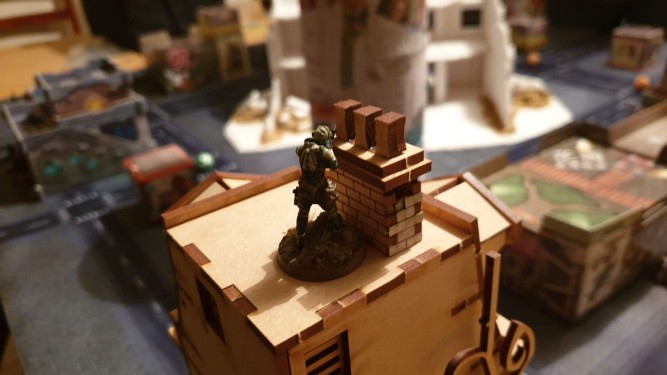 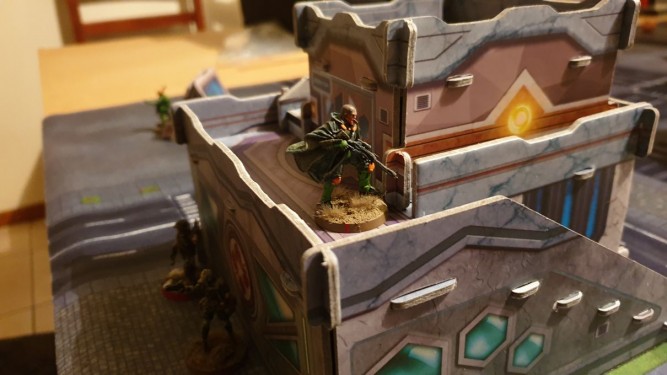 Jethro was even made available for this incursion

Turn 1 started with the Combined Force sending out Dr Worm to grab the middle tech coffin. Being a Dr he was smart enough to deploy a haze of white noise to baffle the MSV2 of the Brawler Sniper. As he moved closer Bob from Accounting turned out to be a Speculo who threw a smoke grenade to cover Dr Worms advance and fall back once obtaining a tech crate. 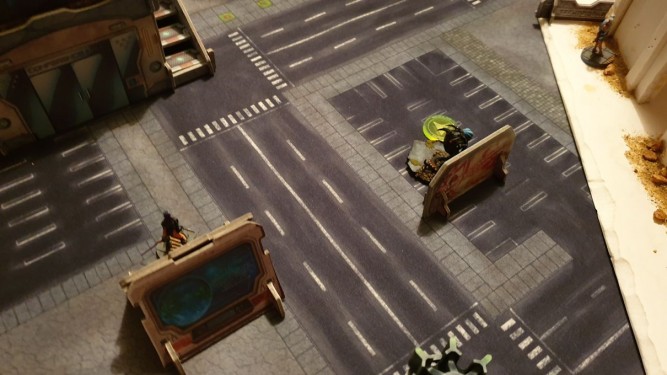 Bob from Accounting was a speculo this whole time!

Turns out Arslan is not the only one with assets in the field, As he started to move his fire team into position Saito Togan appeared close to DR Worm and the speculo. Saito tossed a smoke grenade and made for the left most tech coffin and extracted a crate, He then made a mad dash for the safety of he ruined buildings rubble piles.

Seing this Arslan ordered his link team to move up and provid cover for him, but out of knowhere on the roof to the front a Noctifier with missile launcher, knocking out the HMG carrier Druze.

A hunzakut in who had also had the beinift of getting in early and camouflaging themselves made for the right most tech coffin and extracted a crate, then then get vaporized to a rocket from accross the board. 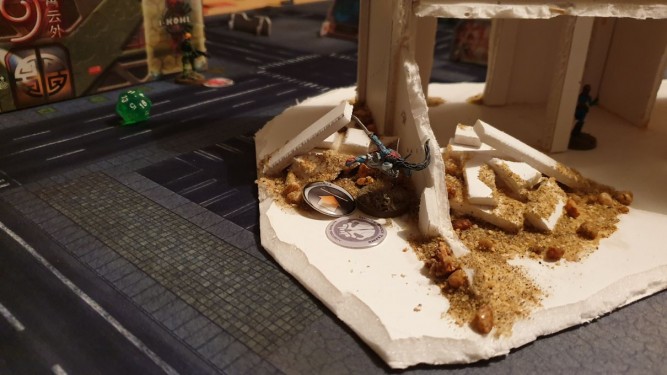 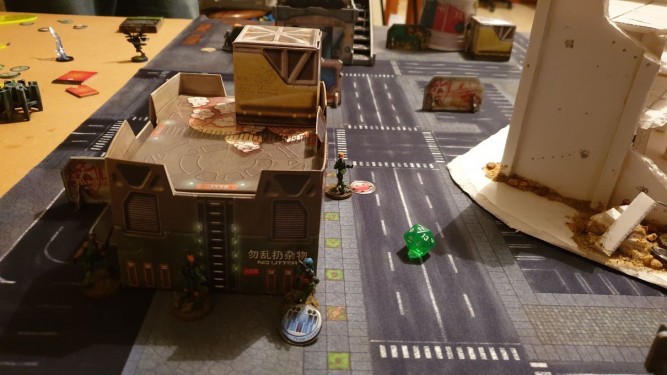 Victor Messer moves up with some fellow army mates in a coordinated fashion to try and run a scan on the unconscious Druze but fails a few trys and backs off.

Charontid moves to engage the Druze hacker and blasts her down with concentrated HMG fire, shredding the hackers armour with three failed saves. Charontid then moves to take care of a second Hunzakut in the ruins, freeing up a better movement corridor.

Arslan sends out a Druze member under the cover of smoke to take the crate from Saito, freeing him up to make a move on the 3rd that was dropped by the Hunzakut, Moving through the ruins and not being noticed Saito attemped to throw another smoke grenade to cover his dash for the crate but failed. 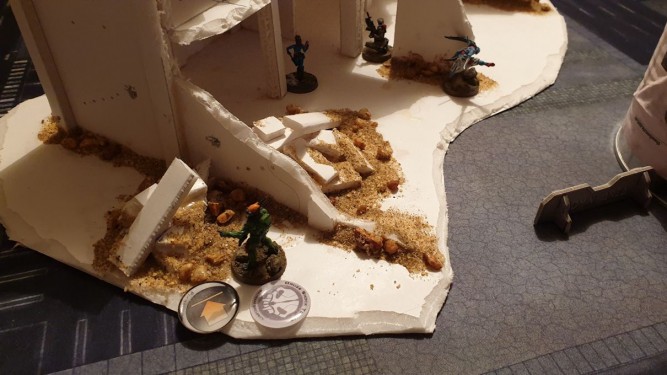 Turn 3 Combined
Charontid moving up again spots the Brawler spotter on the roof and opens up with his HMG. Sending rubble and debris flying. The Brawler sniper managing to get a lucky shot off and delivered a crit from his combi sniper. Charontid kept firing but the Brawler managed to pass 7 out of 8 saves before succumbing to the fusillade .

The Charontid then made a move on Saito, knocking him out of the fight whilst also dropping three HMG round into the back of the prone Druze crate carrier, forcing him to drop it.

From the right board edge a Combined drop troop appeared and took the crate laying on the ground with no fire in return. 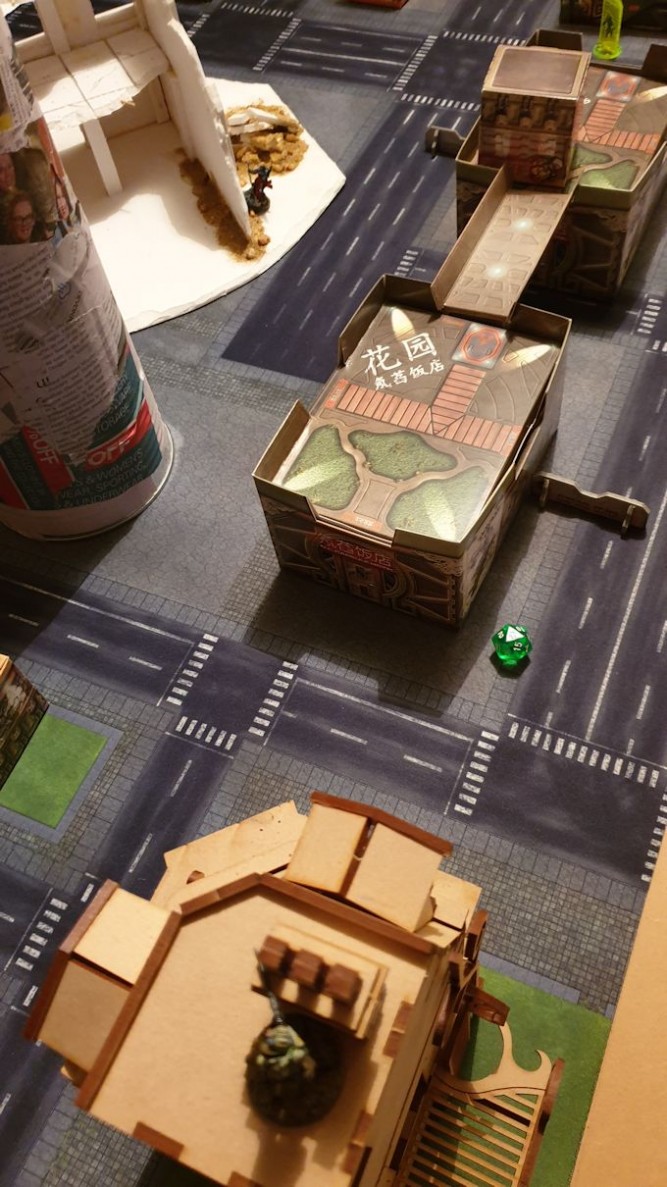 Feeling the losses Arslan spots a Warcor and yells her to move up and try to blind the Charontid without effect, the Charontid in suppression sent a hail of bullets her way but missed and avoided the flash.

A peacemaker bot move up around the corner to attempt a shotgun shot but failed and was take out in return.

Jethro spotting the crate close by makes a dash for it and is critted as he leaves the stairs. A close by Brawler doctor rushed after him but was also critted out of action.

Arslan, his forces depleted could do no more and ordered a retreat to regroup for what HQ is calling a Second phase.

Was a fun game and great to catch up with Amnezia again. I think with the amount of sixteens and twenties i rolled regardless of which dice I used or for what order I should have been playing D&D haha.